The Vuzix V720 is a curious new gadget from Vuzix, a company that has often talked about its consumer video glasses as a side concern next to its work with the military and other such organisations. However, the V720 is out for flat-out fun times.

It’s a pair of video goggles mounted onto a pair of full-size headphones for a fully immersive ‘IMAX’ style experience, to use Vuzix own words. 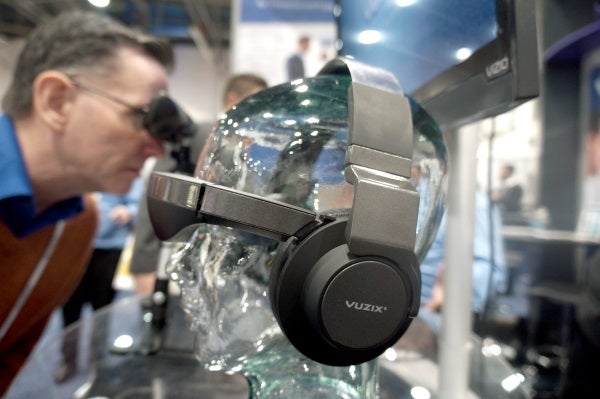 If you’re fed up of the pressures of having a bit of street cred, the Vuzix V720 could be the gadget for you. Like every pair of video glasses invented, they look a little ridiculous. It’s a chunky video visor mounted onto a large pair of headphones.

However, we’re glad to report that Vuzix has not tried to mask the appearance of the V720 in any way – it tried to make the Wrap 1200 video glasses look like shades. It didn’t really work.

Although we didn’t get to try on the full rig, just a separate 3D visor – picking up the V720 it didn’t seem dramatically heavy, and the integrated headphones double as a way to support the glasses on your head. We’ve found most previous Vuzix glasses quite uncomfortable, but this set should hopefully be better.

Using headphones this way is not a bad idea, within the quirky realm of video glasses, although it will be ruined if the sound quality of the headphones isn’t up to it.

The headphones adjust like any normal pair, but there’s also an adjuster on the stem of each side of the glasses, to mitigate differences in the sizes of people’s heads. Comfort is key with something like this, though, and without getting the full experience we can’t comment in whether it’s a success or not. 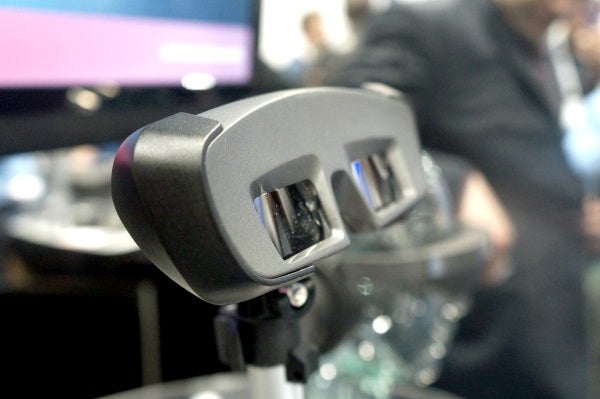 What we did get to test was the image quality. It’s the best video glass experience we’ve seen in a Vuzix product to date.

The Vuzix V720 puts a 720p display in front of each eye, letting each display slightly different information for a crosstalk-free 3D effect. The input is an HDMI port, meaning it can plug into just about any modern home entertainment device, including game consoles like the Xbox One and PS4.  Many spurious claims about the virtual screen size of video glasses are made, but the V720 fills a similar proportion of your field of view as a smaller cinema screen – if you sit near the back of the cinema. Vuzix’s own 75-inch TV claims aren’t hugely far off the mark, if you were to sit 10 feet or so away from the set.

Just as important, contrast and colour reproduction are reasonably good too. Most previous Vuzix glasses offer very grey-ish blacks and fairly muted colours, but the blacks of the V720 are roughly comparable with a modern, decent entry-level LCD TV. We’re not yet sure the exact panel type used in the headset, but we imagine they may be similar to the LCDs of the Vuzix Wrap 1200.

Resolution and colour fidelity are still limited, though. If you have a good TV, its image quality will be superior. The Oculus Rift also fills more of your field of view, which will make it more immersive for gaming. However, we can imagine sinking into a movie with the V720 as it tries to block out the outside environment as much as possible – unlike, for example the Epson Moverio BT-100. 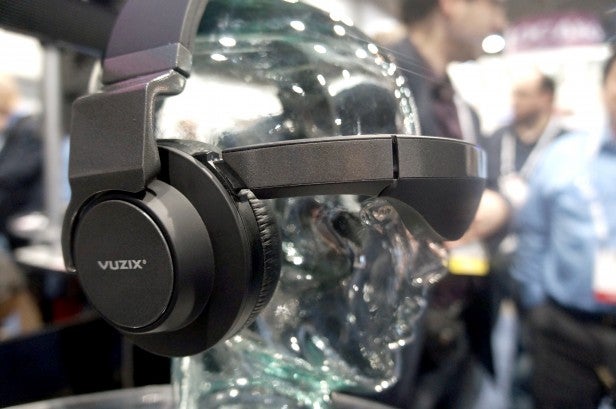 It doesn’t have the cred of the Oculus Rift or the tech of the Sony HMZ-T3W, but the Vuzix V720 is a good deal better than the Vuzix glasses of old. We don’t know how much it’ll cost yet and you probably wouldn’t want to wear it in public, but we so admit we’d like to try this headset cinema properly.

Next, read our Oculus Rift preview