What is the Vorwerk Thermomix?

Vorwerk certainly can’t be accused of not having an eclectic selection of products. At one end there’s the Vorwerk Kobold VK200 vacuum cleaner with its huge range of accessories. At the other is the Vorwerk Thermomix, a professional-level blender and cooker.

The reason for its popularity is that the Thermomix can be used in Guided mode, helping turn you into an expert chef, or used manually, taking the drudge work out of manual jobs such as making sauces.

Overall, the Thermomix is a brilliant kitchen tool for both expert cooks and those who would like to learn more.

In its striking white and green plastic, the Vorwerk Thermomix adopts the hallmark colours of the company’s other products. It’s a solid bit of kit, feeling sturdy and well made.

There’s a heap of accessories in the box, too. Inside the main 2.2-litre bowl sits the chopping and mixing blades, which can either cut or stir, depending on the set speed; for delicate stirring, they can be set to move slowly in the opposite direction. Over these blades, you can fit the butterfly whisk for making meringues, for example. 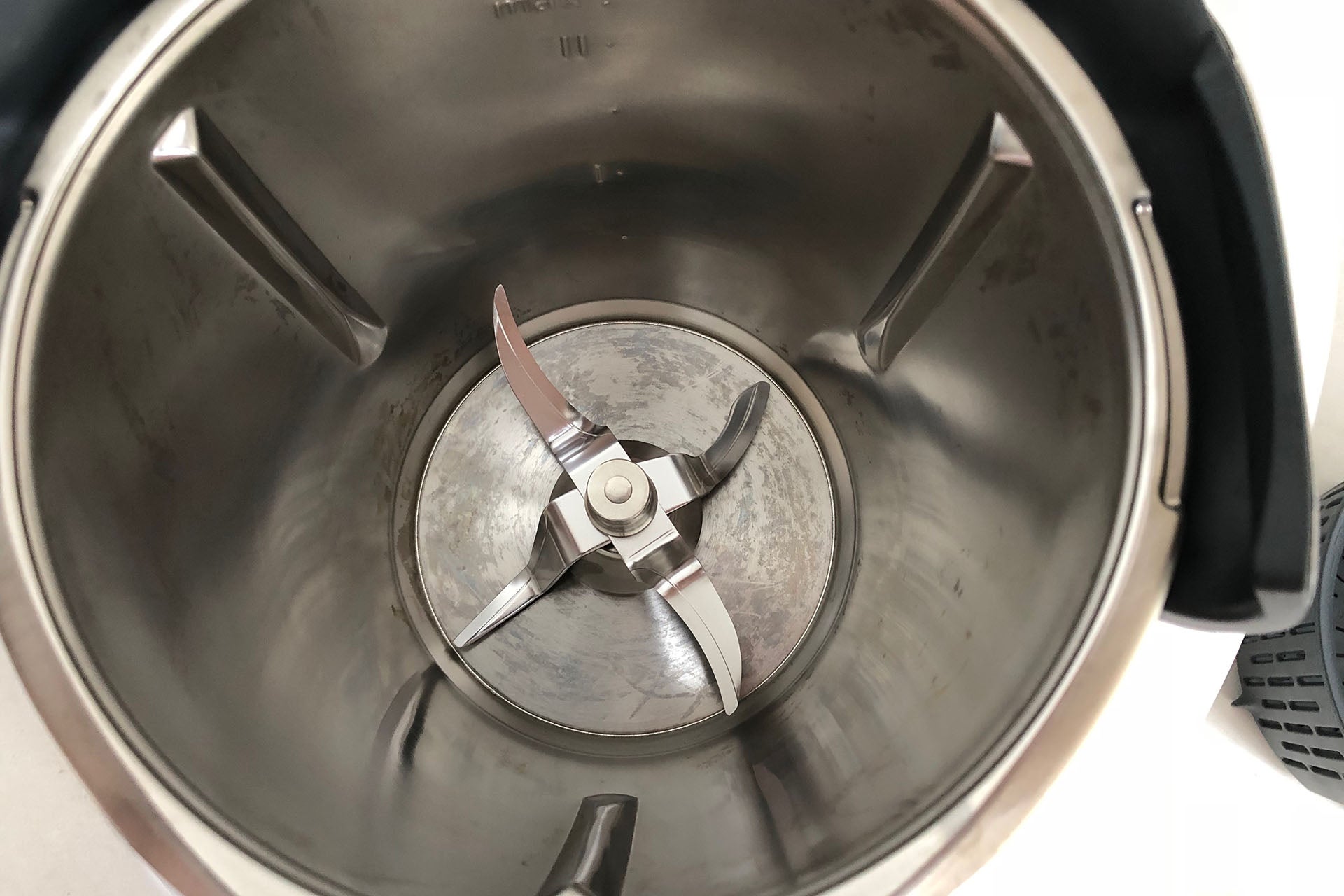 There’s also the Varoma, which sits on top of the machine and provides wide base for steaming everything from fish to vegetables. 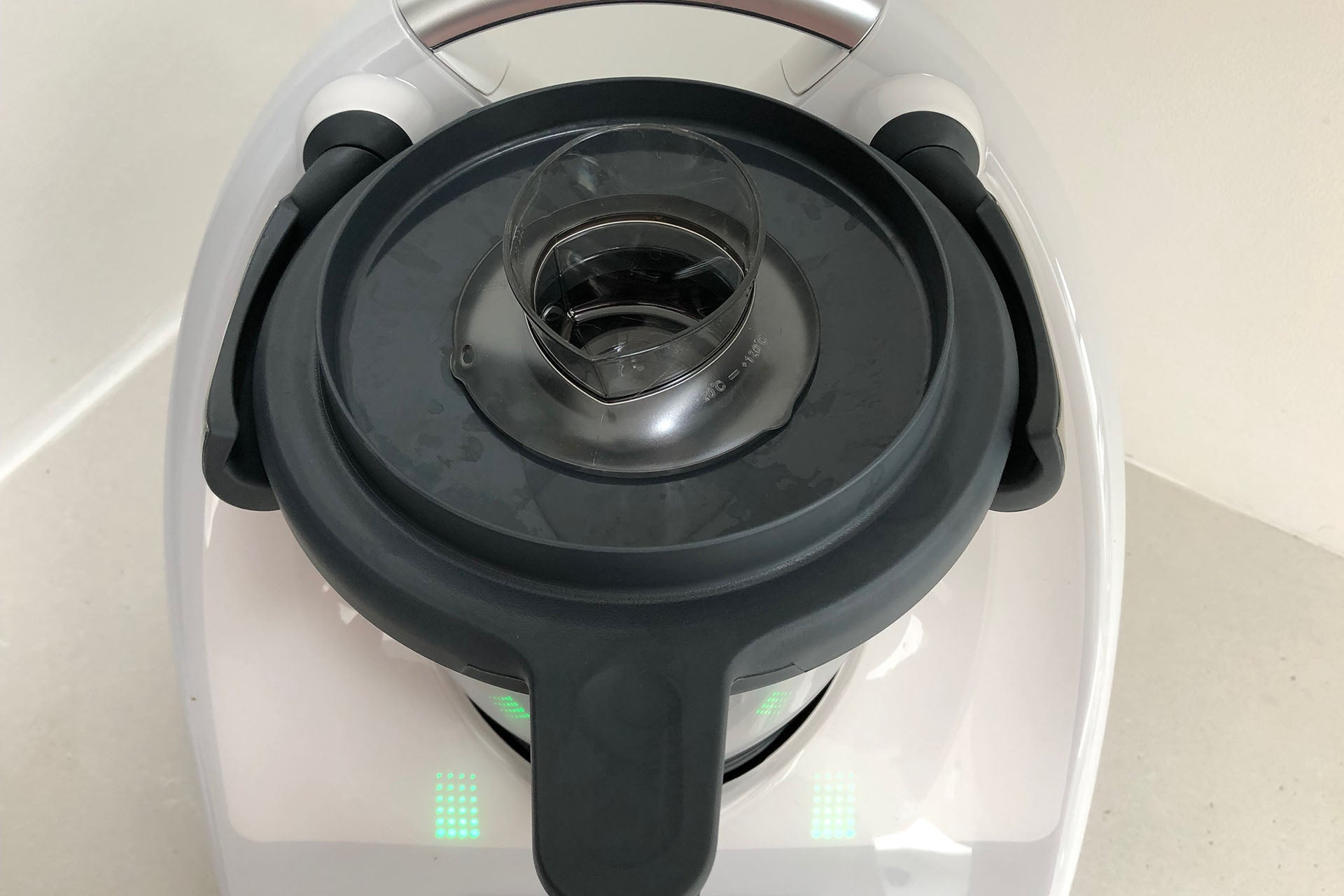 On the side of the main unit is the connector for the recipe chips. Recipe chips contain the guided information to take you step-by-step through cooking. You get the Basic Cook Book in the box, which covers starters to main courses, desserts and beyond, and comes with a handy hardback book with printed instructions.

Additional chips are available, taking in Indian, Italian, sweet recipes and more, and typically cost around £18. Finally, the slot can take the Cook-Key, which links the Thermomix to the internet, from where you can download recipes directly from Vorwerk’s Cookidoo site.

Controls are surprisingly simple. An LCD screen displays the current recipe and what you’re supposed to be doing in the step. It’s a touchscreen, so you can quickly select recipes and move between steps. It also shows you the current weight of ingredients, so you don’t need a separate set of scales. A dial on the right is primarily used to set the three main settings: time to run programme, temperature, and the mixing speed (1-3 for gentle stirring, 4-10 for coarse, fine and very fine chopping). You can reverse the direction of the blade using the dedicated button, and there’s a button for Dough mode for mixing bread. 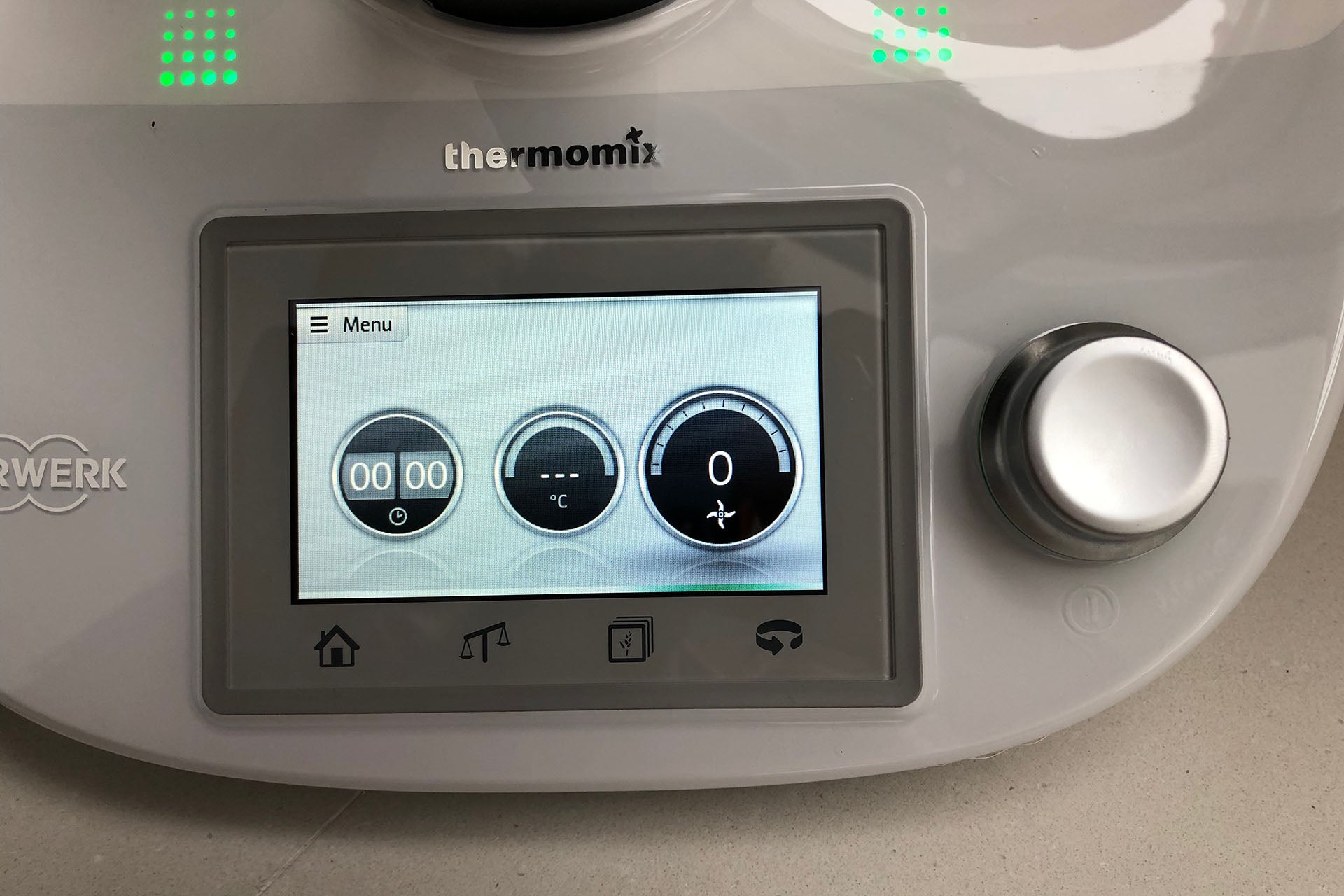 The very simple controls make the Thermomix a simple food processor to use at its most basic. You just throw in your ingredients and then use the speed dial to chop them up to the required level.

If you want to cook, you can set the temperature level and the time. Importantly, the Thermomix will not exceed the temperature set, making it perfect for tempering chocolate or cooking egg-based sauces without turning them into a congealed mess.

If you’re a real expert, you’ll find this level of control incredible and far more accurate (and less time-consuming) than cooking on a hob. For most people – me included – getting to know the Thermomix and what it’s capable of is about using the guided recipes.

I picked a selection from the provided cookbook. I started with something simple: cooking spaghetti. Here, the Thermomix heats the water and slowly stirs the spaghetti until cooked. The finished pasta became caught around the blade, making it hard to dish up. It’s a demonstration that while the Thermomix can pretty much do everything, you shouldn’t necessarily use it that way.

It’s far more impressive a machine when you start to cook more complicated dishes, such as a Hollandaise sauce. Making this manually is time-consuming, and you have to be careful not to end up with a kind of omelette. Following the recipe and letting the Thermomix handle both the stirring and temperature, I had perfect Hollandaise sauce without the mess. 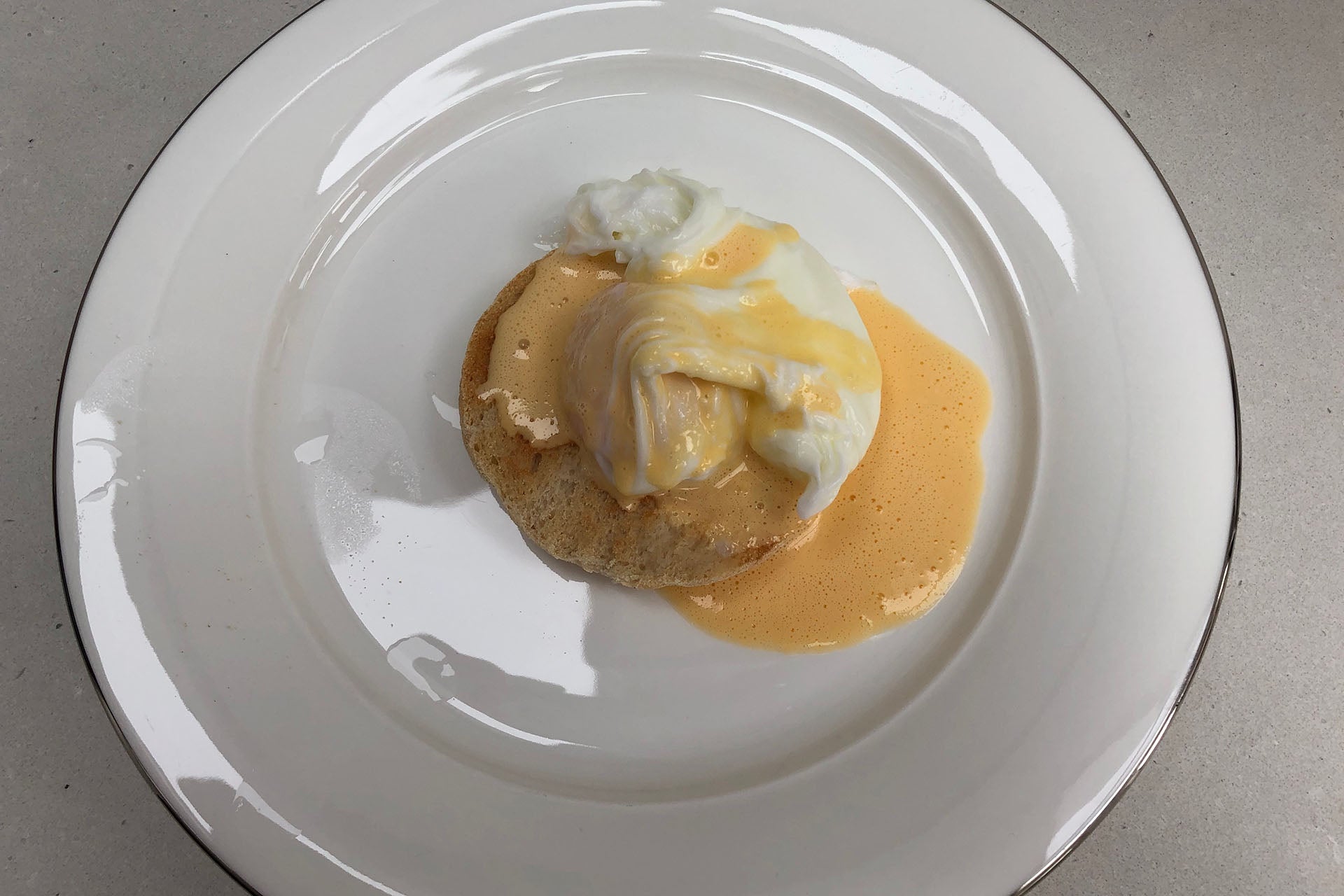 Next, I moved onto the quick Thai green curry recipe. Here, the Thermomix blended and sautéed the onions and garlic perfectly. Using shop-bought coconut milk and curry paste (as suggested) gave a rather watery and tasteless finish.

This was down to the quality of the ingredients, with supermarkets often selling tasteless curry paste and low-quality coconut milk. Switching to online-ordered Thai curry paste and better-quality coconut milk produced the real thing: a think, tasty and quite hot curry. That in itself is an important lesson: you don’t have to be a slave to the exact recipe and can swap out ingredients to get the best results. 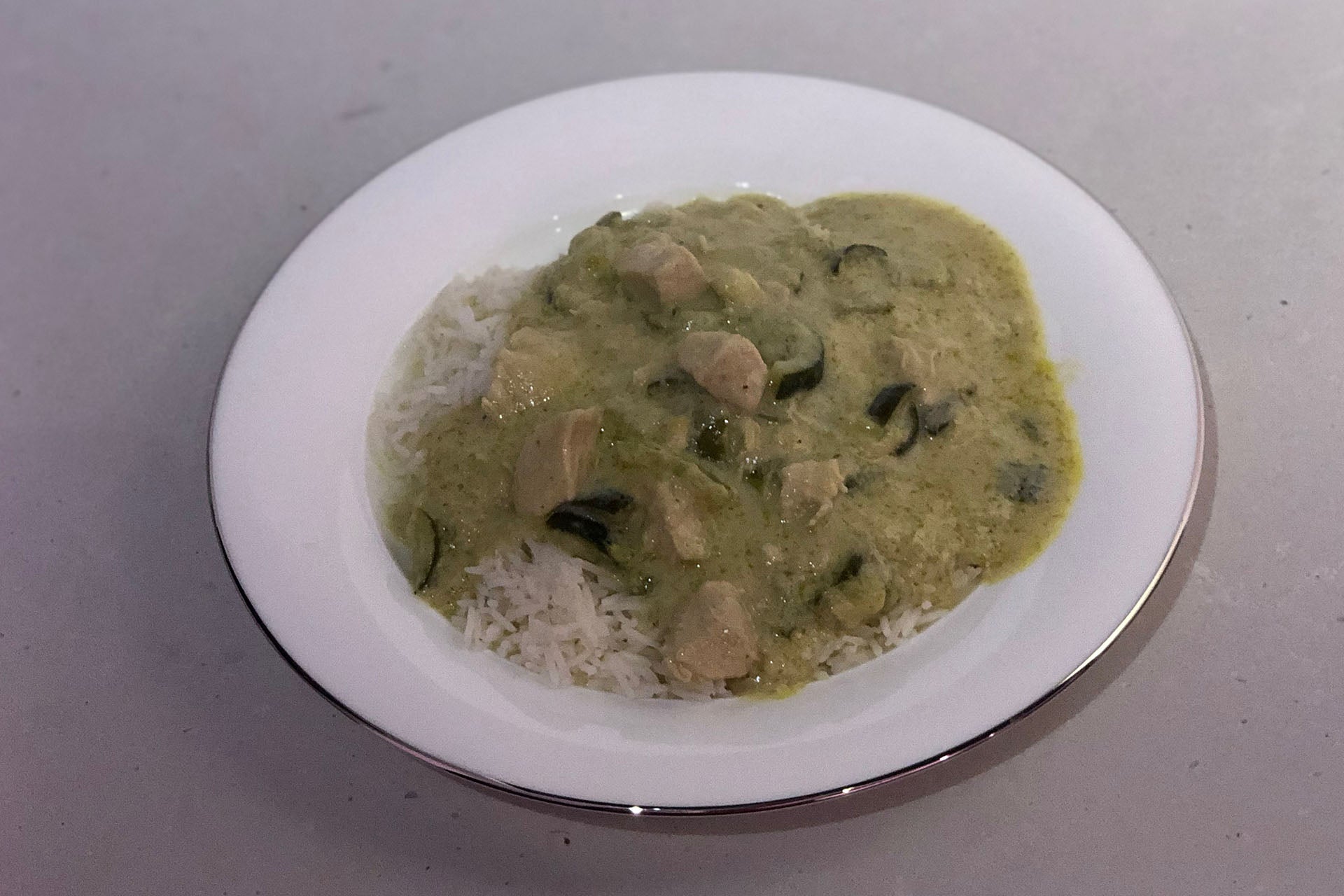 Next, I wanted to gauge the power of the Thermomix, so I made lemonade. Chucking in some lemons cut in half, the Thermomix chopped them to pieces with no problems – rind and all. I added some lemongrass for a bit of kick, too. Adding water and sugar, and mixing, I then just had to strain the mixture for fresh, old-fashioned lemonade. 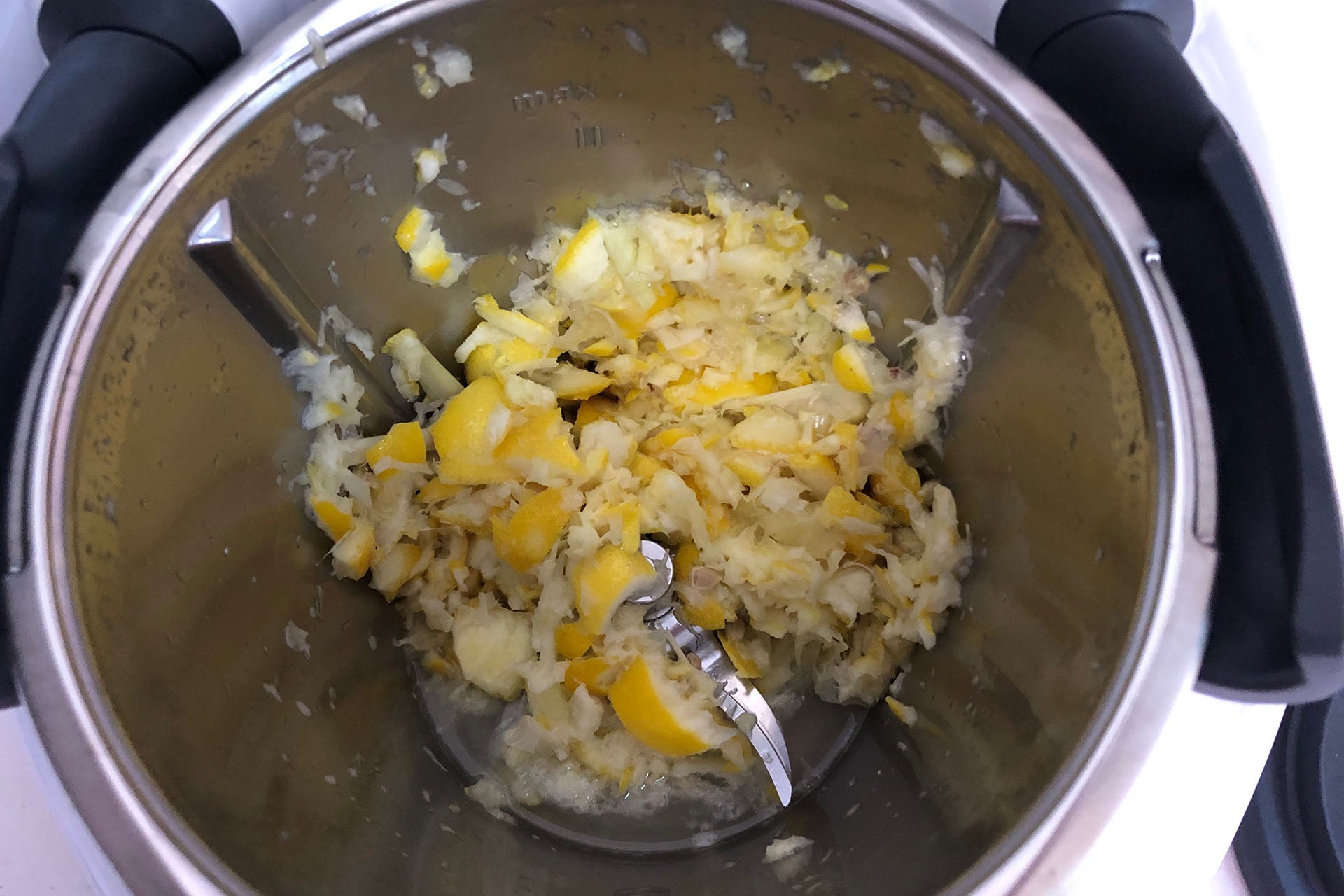 Next, I made a lemon meringue tart, the job beginning with the pastry. I started by grinding sugar into a fine powder – the Thermomix performed well here, with no granules of sugar remaining. That’s impressive going. 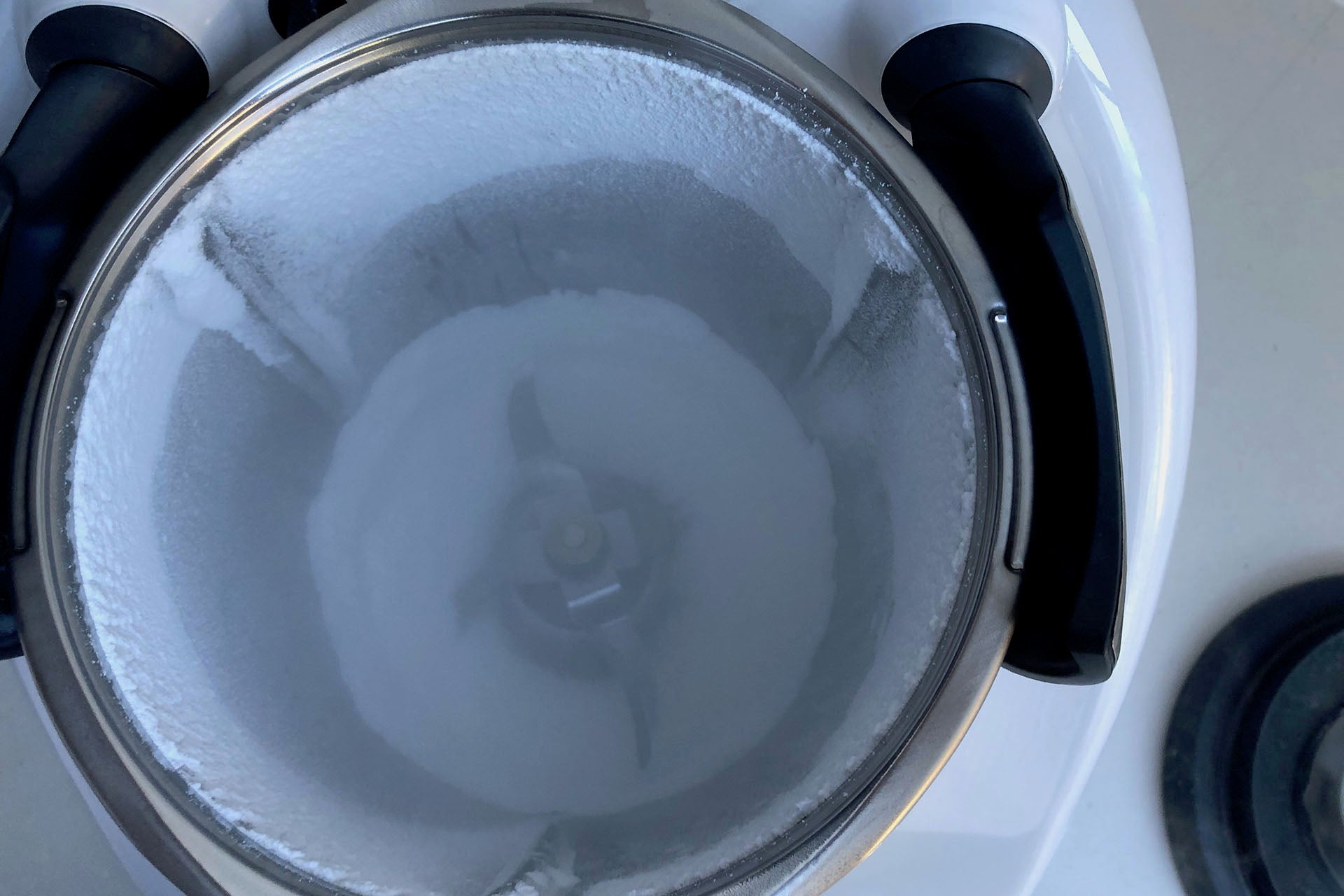 After adding almonds into the mix and completing the recipe, I was left with delicious and moist shortcrust pastry that was easy to work with. While that was blind baking in the oven, the Thermomix then took me through the filling, cooking up the mixture perfectly.

Finally, after pouring out the filling, it was time to make meringue with the butterfly whisk. Glossy, fluffy egg whites were just about right – although, arguably, you may get slightly better results using a whisk and stand mixer, such as a KitchenAid Artisan Stand Mixer. Overall, the result was impressive: crumbly shortcrust pastry, a well-set lemony middle, and soft meringue with a crisp top to cover it. 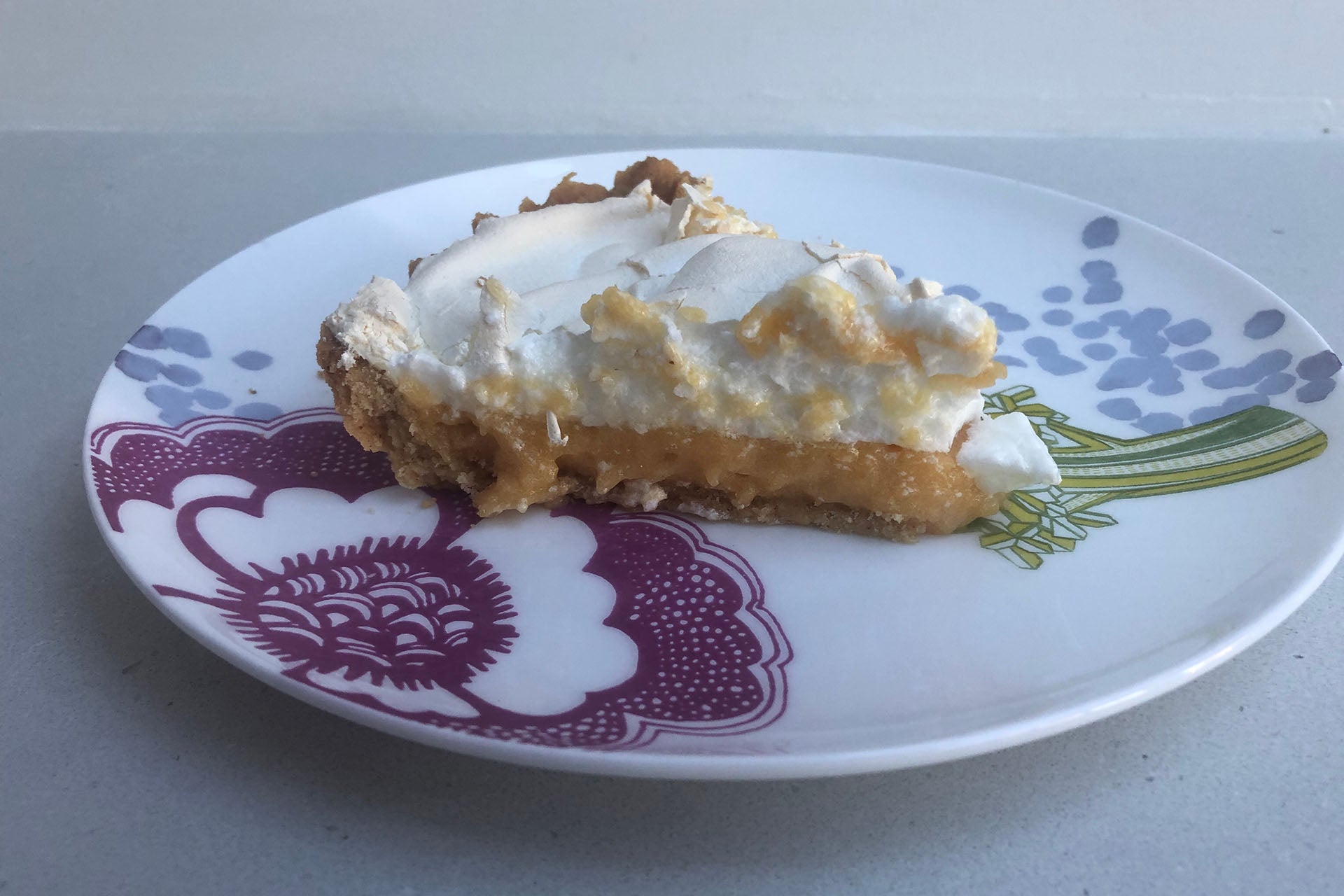 Next, I tried making some French bread. First, the Thermomix heats itself to mix the yeast with the water. After adding bread flour, the machine expertly mixed it with the dough setting, giving me a sticky dough that rose beautifully. After cooking at a high temperature in the oven, my first baguette was more than passable: a crunchy exterior and soft middle. A touch overdone on the first attempt, but that’s my fault leaving it in the oven a little too long. 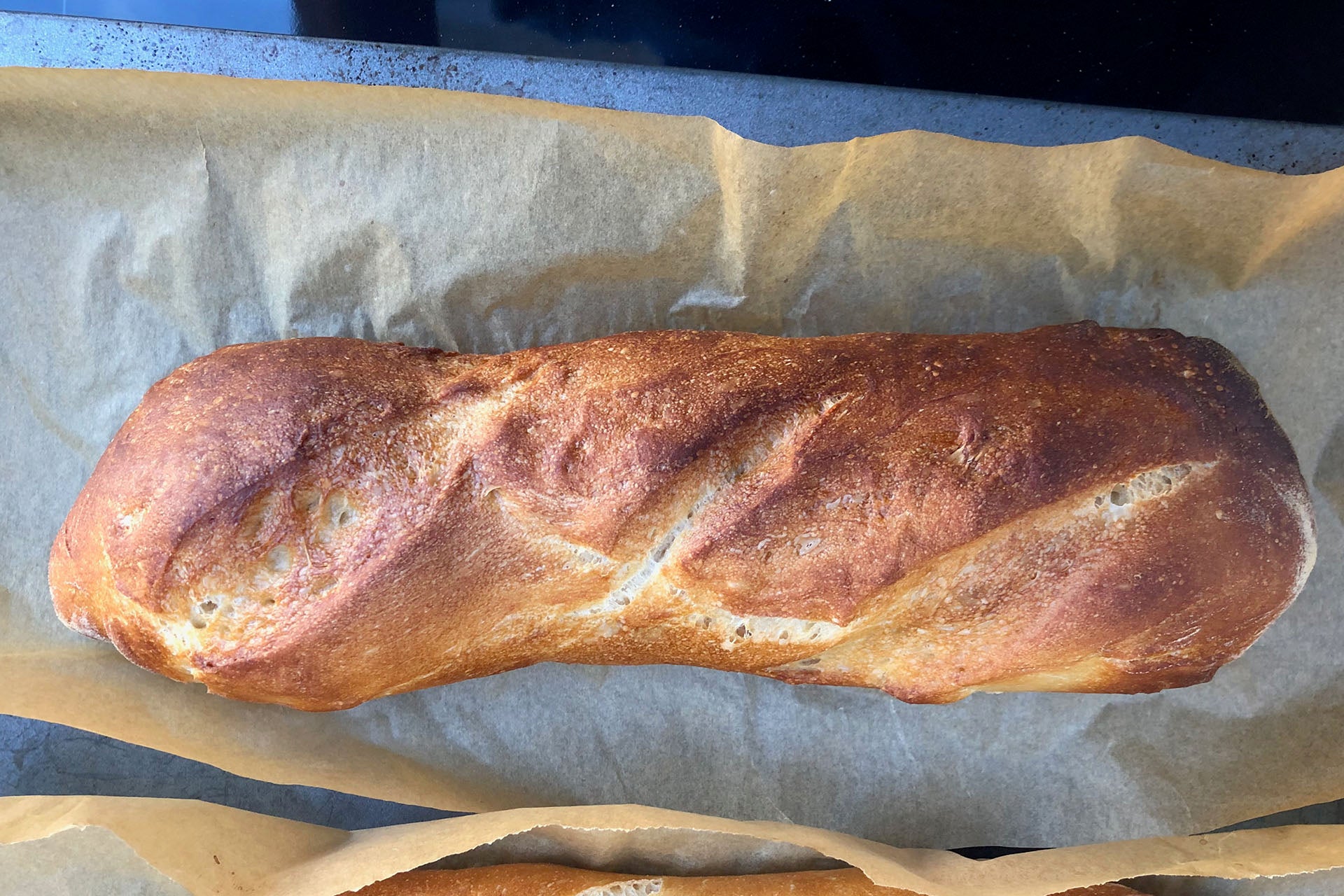 Trying out a few different recipes, I managed a spot-on mango chutney – although I adapted the recipe to suit my tastes. Overall, the Thermomix is an impressive bit of kit: it’s the ultimate food processor with no job too hard for it, and it can expertly mix and cook dishes, too. At the end, everything bar the base unit can go in the dishwasher. This is preferable to cleaning up by hand, as it can be hard to remove all food debris from the blade.

Why buy the Vorwerk Thermomix?

There’s no denying that the Vorwerk Thermomix is expensive. And, it isn’t possible to simply buy one, either: you’ll be given a home demonstration to show you how it works and ensure you’re happy with the kit. Of course, you will be. Aside from being the best food processor that you’ll likely ever own, the Thermomix is capable of producing a huge variety of recipes, expertly chopping, blending and cooking.

With the expandable chip system or Cook-Key, the Thermomix goes beyond the basic recipes you start with, helping you become the ultimate dinner party host. That’s not to say you should blindly follow recipes, as you don’t always get results to your taste: experiment and change around how you make things and you’ll be doubly impressed.

And don’t use the Thermomix where it doesn’t make sense. Likewise, for some recipes you’ll find that a traditional stand mixer may give you better results, particularly if you want to use a balloon whisk.

Moving away from following instructions, fully manual mode lets you take precise control of your cooking, giving you a level of control that just isn’t available when using a hob. The beauty of the Thermomix is that its potential is unlimited and it can keep up with your cooking skills, whether you’re a rank amateur or pro-level kitchen whizz. For those who love to cook, the Thermomix is an incredible addition to any kitchen.