What is the VonHaus 1200W Multi-Cyclonic Bagless Upright?

The VonHaus 1200W Cyclonic cylinder cleaner reviewed a few months back proved to be a bagless bargain, and its upright sibling here hopes to prove just as great value. It packs a potent motor, long cable, large dust bin and a host of hose tools including a small turbo-brush. All for a very affordable £85 or less.

The promise dissolves quickly, though. Truly woeful carpet cleaning performance, unusable on hard floors and dubious build quality only scratch the surface of its issues. The worst upright cleaner we’ve ever tested? You bet. 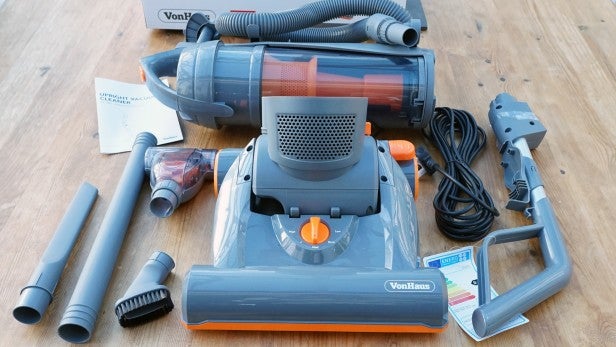 The VonHaus 1200W Upright looks to be great value at its £85 RRP. Even more so since it’s frequently on offer for far less. It boasts a 1200W motor, a large floorhead with rotating brush bar, plus bagless operation feeding into a huge 2.5-litre bin.

The main cleaner comes in three parts and it’s from there that things begin to head south. The central body slides into the floorhead/motor assembly and is held in place initially with a simple plastic clip. This clip has the effect of stopping the two parts joining easily and requires the dexterity of an octopus and a lot of strength to force the parts together. It then uses three screws to secure the fitting, which in effect makes the clip redundant anyway. 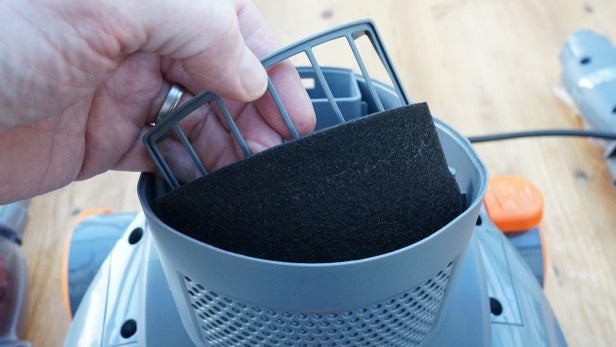 Hilariously, there’s also a small post-motor filter inside the area where the two parts join. This means that you’d have to take it apart, fighting screws and clips, just to clean this filter.

The floorhead offers five height-adjustable levels, enigmatically labelled Low, Bare, Med and High, with a further setting between the latter two that’s just a straight-line symbol. Nope, we have no idea either.

Moving the bright-orange knob between settings isn’t easy: it’s stiff, made no easier as the knob is quite tightly tucked under the main body of the cleaner. Since the knob and mechanism are plastic, we don’t hold out much hope for its longevity.

Note that since you can’t turn off the brush bar, the choice of height will be important in order to avoid damaging delicate surfaces such as soft wood. 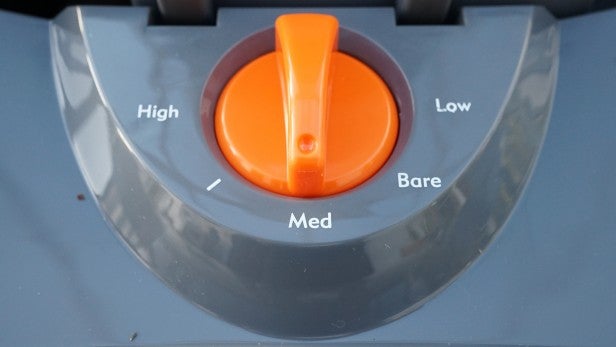 The brush itself is composed of very stiff bristles. It can be removed for cleaning, but that requires tackling five small screws, so this isn’t exactly speedy.

The whole floorhead runs on four basic wheels, none of which feel very solid. Controls are on the floorhead and comprise a foot-switch tilt-release mechanism and a power switch. The latter is almost lost under the body of the cleaner when it’s tilted, making it spectacularly awkward to turn on and off.

The bin has one layer of foam filtration in the top – and that’s it. It comes as no surprise at all that this machine scores the lowest possible “G” rating for dust emissions. The large bin empties at the bottom with a rather flimsy-looking plastic clip that’s forced outwards to release the flap. As we said of the VonHaus Cylinder cleaner, only time will tell if this stands the test of time. 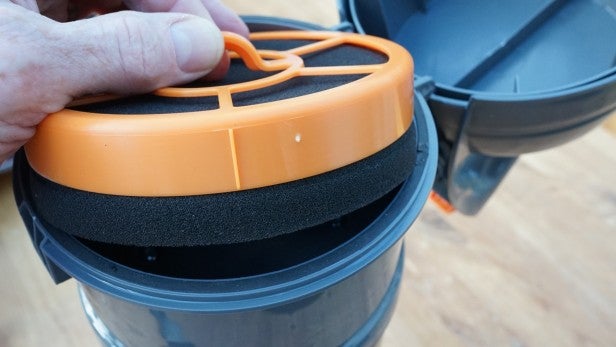 A short, inflexible hose loops around the back of the machine. It attaches to the motor unit with a plastic-on-plastic push-fit connection. This, too, is very stiff to pull apart and equally awkward to replace as the loop of the hose gets in the way.

Accessories include a short plastic extension tube, a small dusting brush and a turbo-tool similar to the one supplied with the VonHaus Cylinder. This can be clipped to the handle and splits in half for easy cleaning. The crevice tool is also a decent size and shape, which is rare for budget cleaner.

In its defence, once assembled the VonHaus 1200W Upright isn’t too heavy without the cable at around 5kg, and all the tools clip to the body for storage and access.

The cable itself is remarkably long for a budget cleaner at almost 8m. This should give you a good reach around the home, without having to swap plug sockets too often. If you want to avoid running over the cable you’ll sacrifice about a metre of it, since it runs from the motor to a clip on the handle. 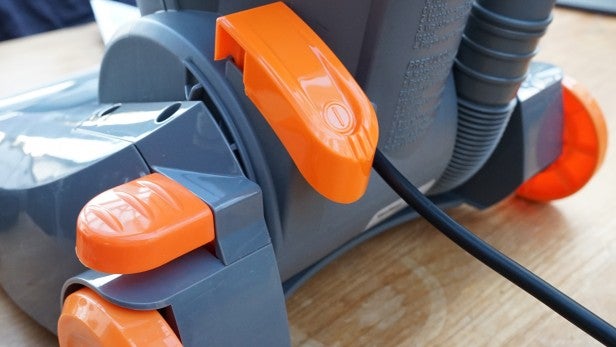 VonHaus 1200W Multi-Cyclonic Bagless Upright – How does it clean carpets and hard floors?

Given the issues we had assembling this cleaner, its dubious build quality and energy label scores that read like a bad school report (D, F, F, G), hopes weren’t high for its performance. Yet the VonHaus 1200Wupright managed to comprehensively fall below even those lowly expectations.

Once we’d found the foot-operated power switch using all the ankle articulation and toe pointing we could muster, the 1200W Upright fired into life with a purposeful roar. We measured 84-85dB over a hard floor.

This is super-loud by modern vacuum standards, and about the same volume level as standing on the pavement when a large truck passes by. At this level (85dB) I’m obliged by the HSE regulations on Noise at Work to provide myself hearing protection during the review! 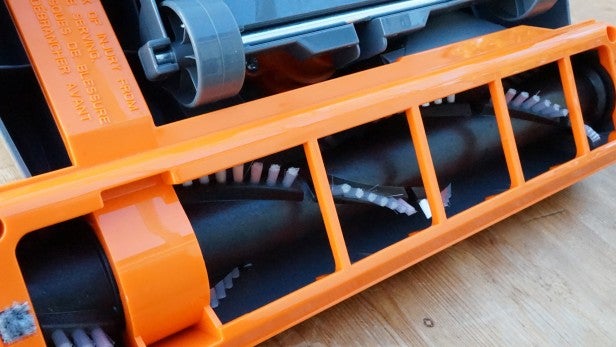 For our hard-floor test we chose the lowest setting for floorhead height, but the sound of the brush bar hammering into the tiles suggested this wasn’t a good choice.

The next setting up, “Bare”, seemed more appropriate. We ground the stiff knob around to this level before tackling our standard test of a small spill of porridge oats. This didn’t go to plan.

In a dramatic first pass the high-speed brush bar spectacularly flicked at least 50% of the oats all over the kitchen floor in a wide radius – hugely increasing the area now having to be cleaned. As we chased these around, the problem got worse. The brush simply flicked out way more debris than it sucked up. Eventually, our small spillage had become a light sprinkling of oats over the entire kitchen floor.

In a desperate attempt to remedy the situation, we tried the higher brush-bar settings. While that stopped the brush flicking oats all over the place, the head was now too high to offer any effective suction.

We tried the floorhead on the lowest setting. That turned an epic failure into a full-blown disaster. The brush bar simply smashed the remaining oats into the tiled floor, leaving oat-coloured streaks that needed scrubbing off with a damp cloth. On the plus side, Jackie watched this saga unfurling in a fit of the giggles that turned into hysterics by the time I was mopping up the floor and cursing. 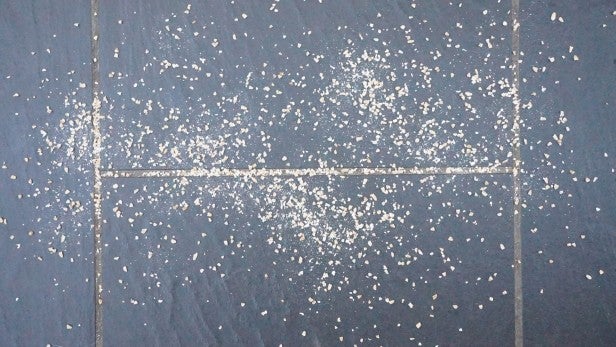 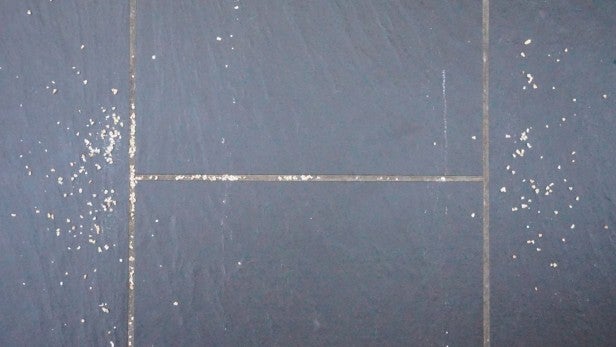 The move to the test carpet was with some trepidation. Setting the cleaner on the “Mid” floorhead height, we ran it slowly across the test patch of mixed carpet freshener and baking powder. Not a lot happened.

Looking at the floorhead height from the side, it appeared that only the lowest setting would be close enough to the short-pile carpet to have any effect. Thus set, the cleaner became immediately much harder to move as the head stuck down in the carpet. We pushed on gallantly.

The upshot was the worst carpet cleaning result we’ve seen in three years of testing nearly every vacuum cleaner on the market. Not only did the cleaner largely just run over the top of the test powder, the brush bar had the effect of beating the dirt deeper into the pile!

This was clearly visible with the white powder showing deep in the bright red carpet, but you probably wouldn’t notice it with normal household dust and a darker carpet – your carpets would just get dirtier and dirtier. The edge test was equally poor, but I was running out of patience – and suitably negative adjectives – by this time. 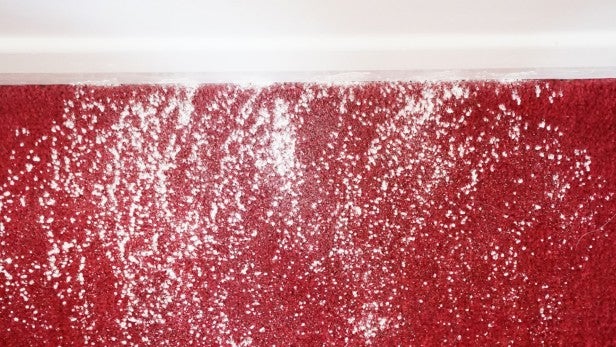 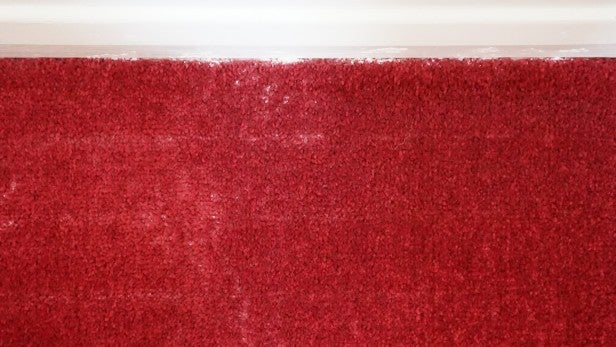 Switching to the hose did at least show off the 1200W motor’s power when concentrated into a small tool. While the plastic extension tube feels flimsy and the hose is super-short, the crevice tool works well and the dusting brush is okay if a little small.

The turbo-tool is a neat addition and, ironically, performs much better than the main brush bar. But if you wanted to use these smaller tools then the VonHaus 1200Wt Cylinder is a much, much better bet.

VonHaus 1200W Multi-Cyclonic Bagless Upright – How does it cope with pet hair?

It doesn’t. The main floorhead’s poor height adjustment and ineffective brush bar do a good job of grooming pet hairs all in one direction. Sadly, the lack of suction means they don’t actually go anywhere.

After 30 minutes of going back and forth over our test patch of mixed Collie and Labrador hair, there were still plenty of hairs left entwined in the carpet.

As a minor comeback from consummate failure on the furry friends’ front, the 1200W Upright’s small turbo-tool was a much better bet.

The smaller surface area helps concentrate the limited airflow and it’s easier to get the brush bar in contact with carpets and furnishings. Many hairs do get picked up. Yet by the time you’ve done a carpeted room with a brush this small, more pet hairs would have materialised out of thin air (as they do…). 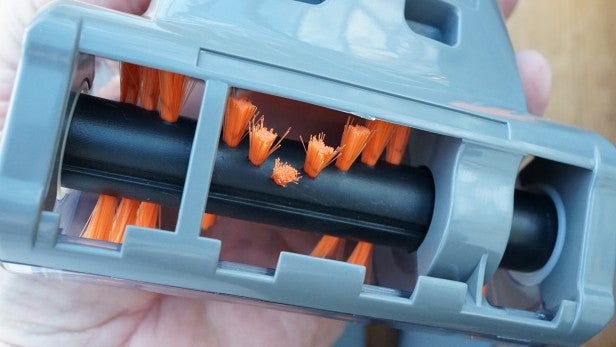 VonHaus 1200W Multi-Cyclonic Bagless Upright – How easy is it to use on the stairs?

Given the poor carpet-cleaning performance this was never going to be a cleaner to manhandle upstairs using the main floorhead, despite its reasonable weight and decent-length cable.

The turbo tool saves the day here, since its cleaning performance on small areas such as carpeted steps is fine. It’s compact enough to use sideways for carpeted uprights, too. There’s no movement or articulation though, so stairs with turns are a little tricky.

The short hose and single extension tube does of course mean you’re forced to carry the cleaner with you up/down the stairs. It’s a little awkward, although with most of the weight being at the bottom in the floorhead, it does feel quite stable when placed on a step. 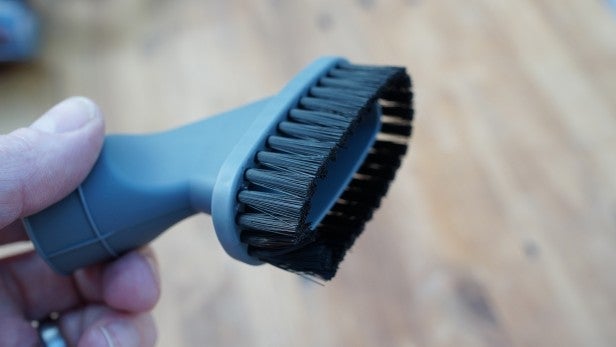 Should I buy the VonHaus 1200W Multi-Cyclonic Bagless Upright?

No. Bagging the award for being truly the worst-performing vacuum cleaner to hit the TrustedReviews test bench to date, the VonHaus 1200W Multi-Cyclonic Bagless Upright is comprehensively dreadful in almost every respect.

A comprehensive feat of poor design, this is simply the worst upright cleaner we’ve ever tested.