It’s not often the most intriguing feature of a product is its name. Sure, something like the EeePC has a fairly distinct name but at least it seems to fit the product. MPX&MPY, though, is just plain weird. However, there is at least some logic to it.


The left tower (in the picture below, which has them the wrong way round) contains an iPod dock, a downward facing sub-woofer, and amplifier circuitry, as well as the five speakers that run down its front. The left tower, on the other hand, consists of only what you can see; a tower with five speakers. Thus the French company, Voix, thought it would be a good idea to call them different names; the MPX and MPY, despite the fact you can’t actually buy them separately. There’s got to be a Franco-Anglo joke about the idiosyncrasies of this decision in there somewhere but for the sake of international relations I’ll let it be – especially as I’ve already incorrectly pronounced the company’s name in the video review.

Getting back on track, the Voix MPX&MPY, is essentially an iPod speaker dock but rather than going for the traditional compact, semi-portable design of many rivals, Voix has taken a very different approach. The two slender black towers are more akin to a pair of Hi-Fi speakers or to the many designer home cinema surround sound systems we see these days. In fact, pop an MPX and an MPY either side of your glossy black TV and you have a seriously nice looking setup that sounds decent, is simple to use and, considering the MPX&MPY only cost around £260, is cheap as well.


Of course, if you want the true home cinema experience you’ll want to get a proper AV receiver/amplifier with a full surround setup but if all you currently have is the sound from your TV’s speakers, you’ll find just plugging the MPX&MPY into the line-out of your TV makes for a huge improvement. Then, of course, if you just want to listen to your iPod you don’t need any other equipment. Just flip open the top of the MPX and away you go. It really is a great idea.


You don’t have to use the MPX&MPY alongside a TV but we fail to see what the appeal of such a large and unwieldy setup would be when there are many more-compact and elegant alternatives that sound better. 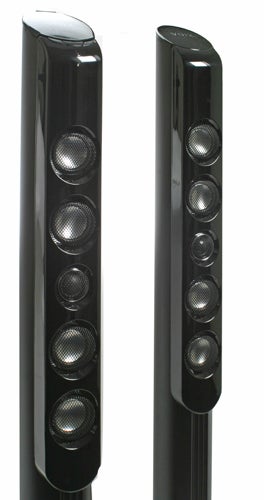 The tall and thin stance and glossy black finish looks great from a distance or in the gloom of a dimly-lit TV watching environment. Up close and in the cold light of day, though, the origins of their relatively budget price is clear to see. While the main stems are made from a tough extruded plastic that does a good job of pretending to be aluminium, the glossy black sections that surround the speakers lack a quality feel and the iPod dock in particular looks messy. We also think the speaker grills look a little cheap. 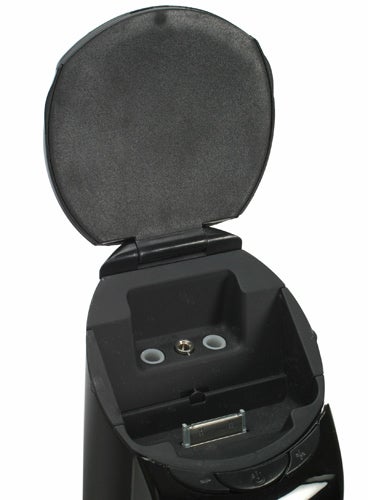 The iPod dock uses a simple universal design that doesn’t require replacement plastic inserts for each different iPod, so we definitely approve of that. However, the solution is by no means perfect. For a start, as mentioned, it looks rather cluttered but more worryingly is its complete lack of support for the iPhone. Not that official support for the iPhone is common – most docks require you to turn the iPhone to Airplane mode to prevent those annoying occasional squeaks and clicks that mobile phones can cause in audio equipment.


However, the MPX&MPY actually emits a loud and regular clicking sound as soon as you plug the iPhone in and this can’t even be stopped by turning on Airplane mode. Considering the rapid uptake of iPhones amongst iPod users, this is obviously a huge oversight and is something that Voix needs to sort pronto – we’ll keep you posted if a new version of the MPX&MPY that fixes this comes out.

One last point about the dock area that we do like is the auxiliary line-in jack. While there is another input round the back, having one up top means you can nestle your iPod-alternative in the dock area (where you can see the screen and it’s within easy reach) and not have to have huge long cables trailing down the back.

Along with the auxiliary input, the back of the MPX is home to a line-out; a sub-out for use with the additional matching BX2 sub-woofer; speaker connections for the MPX; and a power socket. We’re disappointed to note that the speaker connections use sprung clamps and bare wire rather than properly terminated cables, though this is probably to be expected considering the price. 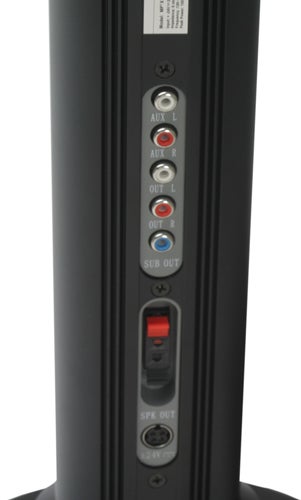 We weren’t provided with the BX2 for testing so we can’t vouch for how much extra kick it provides. What we can say, though, is that the MPX&MPY do sound perfectly okay as they are, and ”should” improve upon the bass level of your TV’s inbuilt speakers. Likewise for music, the downward facing sub of the MPX provides plenty of warmth to satisfy most listeners. If you’re a dance music fan you’ll probably want to consider getting the BX2, though. 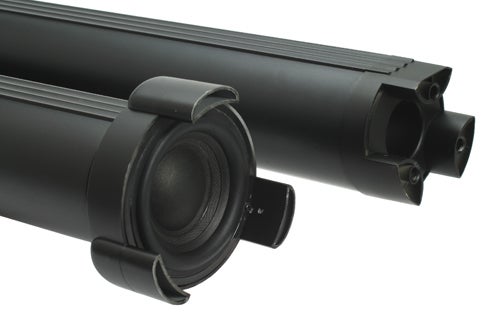 Just three buttons adorn the MPX&MPY themselves. These control volume and power and are nestled under the iPod dock on the MPX, just above a couple of distractingly bright LEDs that indicate power and remote signal activity. For basic playback controls, though, you’ll need the remote. 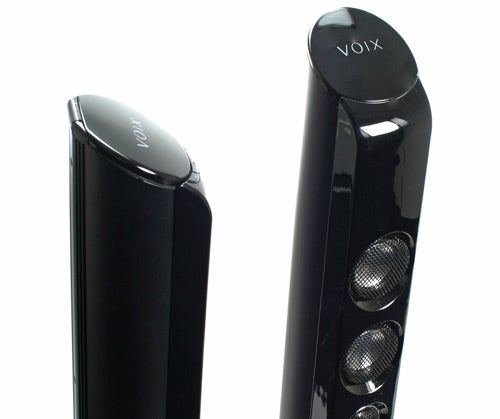 The remote is also home to input selections, a mute button, and even has some basic EQ controls. It’s nothing special but it does a decent job of controlling everything you need, has a good range, and is uncluttered. It’s only real failing is its thin and relatively small size. After using these speakers at home for a couple of weeks, I found that the remote had a tendency to easily slip down the back of the sofa more often than your average TV clicker. 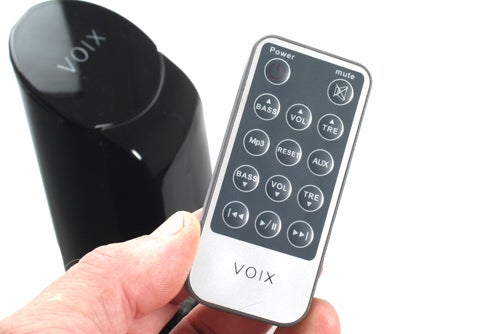 Not that this is even close to being the MPX&MPY’s main failing though. No, that honour goes to the ridiculous way in which volume is controlled. Not that the set doesn’t get loud or quiet enough, just that each step between the two extremes is gargantuan. One click of either the remote or the volume buttons on the MPX and the volume seems to double. This lead to constant frustration as we flicked back and forth between two volume levels while trying to hear the quiet bits yet not disturb the neighbours with the loud bits.

This really is a shame as the MPX&MPY sound great whether listening to the blast beats of Napalm Death, the sumptuous ivory tinkling of Martha Argerich, or the battle scenes of a refuge camp in Children of Men. Were it not for the volume issue, the MPX&MPY would have got a recommended award, and if Voix was to fix the iPhone support this could even have stretched to an Editor’s Choice.

The Voix MPX&MPY take a unique approach to iPod speaker dock design creating, potentially, the perfect all-in-one living room audio upgrade. However, they’re let down by one simple flaw that is simply untenable – and they could do with a fix for the iPhone problems as well!