Back in September 2004 I reviewed the Vodafone Mobile Connect 3G data card, and was amazed at how useful it was. As someone that’s often having to work while out and about, the ability to get online from pretty much anywhere was something of a Godsend. Back then, the 384kbps download speed was impressive, with most home broadband users lucky to get 1mbps connections at the time. But the big turning point was the launch of HSDPA, which offered 1.8mbps on the move and really did give you broadband speeds while sitting in the park, or a coffee shop.


The big breakthrough came when Vodafone launched its Mobile Connect USB Modem back in November 2006. This device married the online-anywhere performance of the PC Card offering, with the flexibility of USB. Not only was the USB Modem compatible with any device that supported USB, including Apple Macs, it also had the device drivers embedded (at least for Windows). The result was an HSDPA device that you simply plugged into a USB port without the need for a driver CD to get it working.


Back in November Vodafone launched its new HSDPA USB Modem, nicknamed The Pebble. Not only did the new model have a sleek and stylish design that was bound to appeal to MacBook users, but it was also rated at 7.2mbps. Unfortunately when The Pebble launched there wasn’t much in the way of 7.2mbps coverage, so I didn’t get a chance to review it. But a couple of weeks ago Vodafone launched another 7.2mbps USB HSDPA device, this time called the USB Modem Stick, and this time I was able to put it through its paces.


As its name suggests, this latest HSDPA device from Vodafone resembles a traditional USB memory stick, although a pretty big one by today’s standards. As such, there is no need for connection cables, with the device itself sliding straight into a USB port. It’s also worth mentioning that absent minded users need not worry about losing the cap to the USB Modem Stick, since it’s cleverly tethered to the device, thus making it impossible to lose without employing the services of something sharp. If your notebook can’t accommodate a large USB device – like the woefully under-featured MacBook Air – you can use a USB extension cable, and you’ll find one in the box with the Vodafone USB Modem Stick. 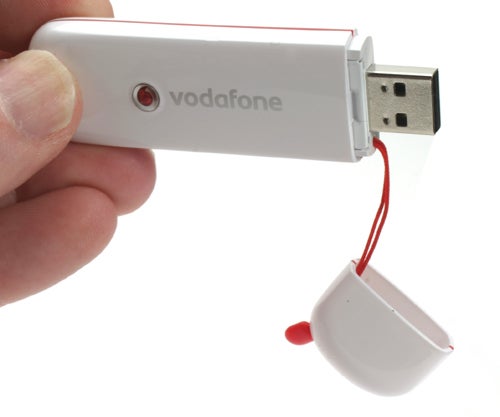 Like the original Mobile Connect USB Modem that I reviewed, the USB Modem Stick is a plug and play device. Simply plug it into a Windows PC / notebook and it will automatically install the required drivers and configure itself – it really is that easy. If you’re a Mac user however, you’re still going to have to install the drivers from the supplied CD before you can use the device. The beautiful thing about having the drivers (for Windows at least) embedded on the device is that you can easily transfer the USB Modem Stick to pretty much any PC with ease. If you need to download something to a friend’s notebook, but you’re out and about, you can simply plug the USB Modem Stick in, let it auto configure and then just fire up a browser.

So, the USB Modem Stick is easy to install and use, while also being the smallest HSDPA device on the market, but how does it perform? Well, this is in no way the first 7.2mbps rated HSDPA modem to hit the market, but although units like the Orange Option Icon 2 are rated at 7.2mbps, the Orange network actually has no 7.2mbps support available. Vodafone on the other hand, at least has some 7.2mbps coverage here and now, allowing you to take advantage of the capabilities of the USB Modem Stick. 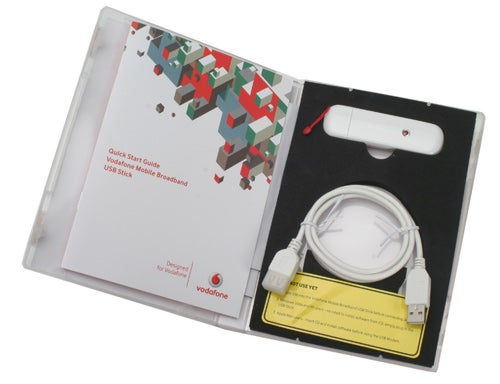 Vodafone currently offers 7.2mbps coverage in most major airports in the UK, along with much of central London. To test the USB Modem Stick I ventured to Gatwick Airport, sat down in a restaurant, ordered some breakfast and whipped my laptop out. I was instantly aware of how quick web pages loaded and how fast downloads completed, but what really surprised me was that I was actually able to get a faster connection than I have at home using ADSL! Now, I accept that living in a small village in Surrey won’t afford me the fastest broadband connection, but my home broadband gave me a throughput of around 2.2mbps, while my router claimed a connection speed of 5mbps. Comparatively, the Vodafone USB Modem Stick returned a download speed of 3.3mbps, with the modem claiming a 7.2mbps connection.


Now, there are a few things to consider with those numbers. First up, my broadband performance at home is in no way a poor reflection of my ISP. In fact my ISP, Eclipse, has provided me with nothing but first rate service for the past two years. The issue is that I live a fair distance from the exchange and telephone lines are pretty old and routed overhead (that’s what you get for living in a period cottage). Add to that the contention that’s inherent with ADSL, and the speed I’m getting is pretty much right where it should be. Likewise, the fact that I was using the USB Modem Stick in an area of 7.2mbps coverage and getting real world download speeds of around 3.3mbps is pretty commendable, and definitely the best HSDPA performance I’ve experienced so far.

The fact that Vodafone is already rolling out its 7.2mbps service bodes well for its customers, while the company’s 3.6mbps coverage is also better than most. I found that I could get good HSDPA coverage all over London, in and around Ascot and at home, where signal strength can often be an issue. It’s also worth mentioning that the USB Modem Stick provided far better upload speeds than I’ve been used to, which is a pretty big help for an online journalist who has to file stories while out and about.

As with all data devices you can also send and receive SMS messages, which can be pretty useful, as long as your recipients are aware that the phone number associated with the data device is yours. One thing’s for sure, I can type an SMS far faster on my notebook than I can on a phone – even an iPhone!


If there’s one potential issue with the USB Modem Stick design, it’s that it sticks out a fair way when it’s inserted into a USB port. That said, if this does bother you, you can employ the aforementioned extender cable, although I didn’t find any problems with the USB Modem Stick getting in the way while in use. Personally I’d far rather be able to plug an HSDPA device directly into a USB port rather than using a cable, it’s one less thing to have to carry around. 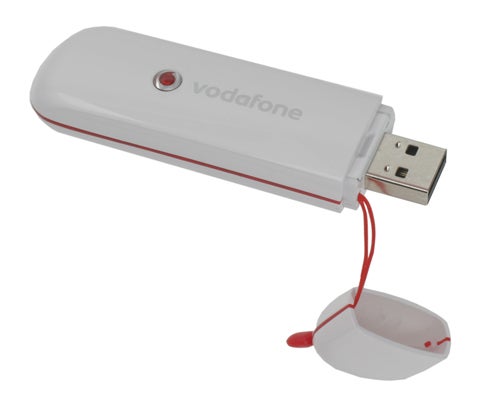 When it comes to cost, the USB Modem Stick can be yours for nothing, as long as you’re happy to take out an 18 month contract. For just under £30 per month (£25 plus VAT), you’ll get unlimited data at the fastest HSDPA speeds available. Of course when I say unlimited data, there is a “fair use” policy, which limits users to 3GB of data per month, although many home broadband packages have lower data caps than that.


By comparison, T-Mobile’s USB Web ‘n’ Walk modem will only set you back £20 per month for the same amount of data. However, it’s worth remembering that the T-Mobile package is for 1.8mbps HSDPA, so it’s potentially far slower than the Vodafone option, while you’re also restricted from using VoIP services – no such restrictions apply with Vodafone. As such it comes as no surprise that Vodafone is marketing its HSDPA service to business customers who are likely to pay a premium for that extra speed.


The Vodafone USB Modem Stick is the best HSDPA data device available – it’s small, needs no cables and carries its drivers around with it. And while most 7.2mbps HSDPA hardware is limited to the far slower data speeds of the network operator, Vodafone is actually offering 7.2mbps service right now, with wider coverage rolling out throughout the year.


Yes, there are cheaper HSDPA options out there, but if you want the fastest possible data rates while out and about, coupled with the best device, the Vodafone USB Modem Stick is the one to go for. Put simply, unless your notebook has built-in HSDPA functionality, this is the mobile data solution you want.