Back in August I looked at Vodafone’s Mobile Connect HSDPA data card, and although it performed brilliantly, it suffered slightly in the value stakes. The value issue stemmed from the fact that T-Mobile’s identical Web ‘n’ Walk Card offered significantly greater levels of data download at a lower price. But one thing that both the Vodafone and T-Mobile data cards have in common is that they need a notebook with a PC Card slot to function.


The PC Card standard has been with us for a very long time, and we’re finally starting to see notebook manufacturers move over to the faster Express Card standard. Unfortunately, if a notebook only has an Express Card slot, it means that existing PC Card devices, like data cards, can’t be used. Of course Vodafone could produce an Express Card version of its HSDPA card, but I’m guessing that the potential market is still too small to justify the investment. So, instead Vodafone has decided create a USB device, and the logic behind this decision is undeniable. 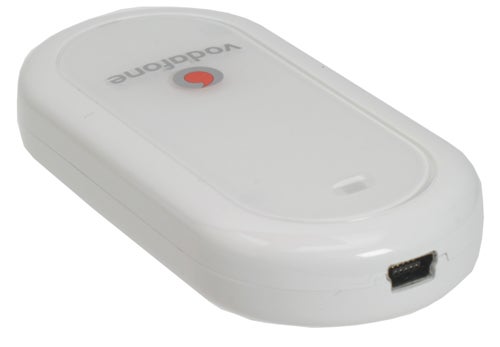 The Vodafone Mobile Connect Modem is a good looking bit of kit. Finished in glossy white plastic and shaped like a large, rounded lozenge, there are no prizes for guessing the design inspiration. In fact when you place the Mobile Connect Modem next to an Apple MacBook you could be forgiven for thinking that it was an Apple accessory. You see, since Apple moved across to an Intel platform for its notebooks, there has been no support for PC Card devices. The MacBook Pro only has an Express Card slot and the MacBook has no expansion slot at all, like the iBook before it. But it’s not just Apple notebooks that are appearing without PC Card slots, the HP Compaq Presario V6000 that we reviewed recently also only supported Express Card.


In the box you get the Mobile Connect Modem, a short USB to mini-USB cable and a longer twin USB to mini-USB cable, in case the device can’t pull enough juice from a single USB port. There’s a single indicator light on the modem which shows its connection status and the service to which it’s connected. At one end you’ll find a mini-USB port for connecting to a computer and in the side is a removable drawer for the SIM card. 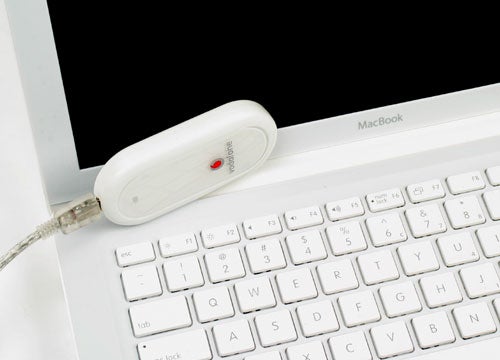 One thing that you won’t find in the box is a driver CD, which highlights one of the inherent advantages of this USB device over its PC Card forebears. You see the Mobile Connect Modem has its drivers built in to the hardware. This means that if you wanted to use the device on a new notebook, you wouldn’t need to worry about having the driver disc with you, you could simply plug it into the USB port and the drivers would load automatically – at least they would if that notebook was running Windows. Unfortunately the automatic driver install doesn’t work with Apple Macs, and the driver needs to be downloaded from the Vodafone site before the Mobile Connect Modem can be used.

Now, it’s obviously a shame that you can’t just plug and play if you want to use a Mac, but it’s worth remembering that this is the only HSDPA module that can be used with a Mac at all. When I first tried out the Mobile Connect Modem the Mac drivers didn’t support the new Intel based hardware, but in the nick of time, Vodafone sent me some new drivers that did support the Intel based machines. Both sets of drivers should be available for download from the Vodafone website by the time you read this review. I tested the modem using both a G4 PowerBook and an Intel Core Duo based MacBook and it worked flawlessly in both cases. I managed to get downloads of around 130KB/sec, which is pretty standard for a 1.8Mbit/sec HSDPA connection – and that was connecting from the TrustedReviews office, where reception is notoriously poor. So, now Mac users can enjoy lightning fast download speeds on the move, even if they don’t have a PC Card slot in their machine. Vodafone has also informed me that despite the lack of a driver disc in my review sample, the production units will ship with a driver CD for Intel based Macs. 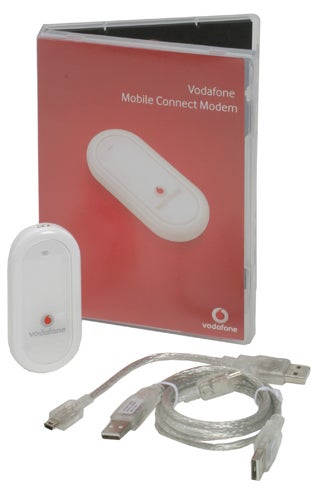 Using the Mobile Connect Modem on a Windows based system is simplicity itself. You just plug the device into a free USB port and then sit back and wait for everything to happen. The Mobile Connect Modem is instantly recognised as both a data device and a USB mass storage device. The drivers for the modem are then automatically loaded from the embedded USB storage and a virtual CD-ROM is created to allow you to run the Mobile Connect Lite software without ever having to install it onto your computer. If there’s one downside, it’s that the Mobile Connect Lite, as its name suggests, isn’t as fully featured as the Mobile Connect suite that ships with the data card. There’s no option to send text messages direct from the application like you can on the full suite for instance, which is a shame. But considering the functionality you’re getting with this little beast, this oversight is easily forgiven.


It’s also worth remembering that since the Mobile Connect Modem uses the USB interface, it’s not limited to notebook use either. There’s nothing stopping you from connecting the device to a desktop PC if it doesn’t have an Internet connection. In fact I hooked it up to a couple of desktop machines and it just went about its business without issue. Now I know that most desktop PCs already have an Internet connection, but if your ISP happened to go down, it would be handy to be able to just plug an HSDPA modem into the USB port to keep you working.

Interestingly, when I connected using the Mobile Connect Modem on a Windows PC, Windows reported the connection speed as 3.6Mbit/sec, which would indicate second generation HSDPA hardware. Under test though, it was clear that I was still getting the more common 1.8Mbit/sec HSDPA service, with fast downloads coming at a rate of around 130KB/sec and the ADSLguide Speed Test reporting around 1.1Mbit/sec real throughput. What this could mean though, is that the USB Mobile Connect Modem is future proof, and when Vodafone launches its 3.6Mbit/sec service the device will ramp up. Unfortunately Vodafone could neither confirm or deny this suspicion, so it may just be Windows misreporting the connection speed. It’s also worth mentioning that the Mac software stated a connection speed of 1.8Mbit/sec.


When it comes to pricing the USB Mobile Connect Modem follows the same pricing plan as the Mobile Connect Data Card. This means that if you want to go for the entry level monthly plan, you’re going to have to pay just under £30 per month and around £116 for the device itself. When I reviewed the data card I considered these prices too high, since T-Mobile was offering 2GB a month of data with an identical card thrown in for free. But that same argument doesn’t hold true this time around, because T-Mobile doesn’t have a comparable product to the USB Mobile Connect Modem – in fact, no other network operator has anything that can compete with this device, which puts Vodafone in a very strong position. 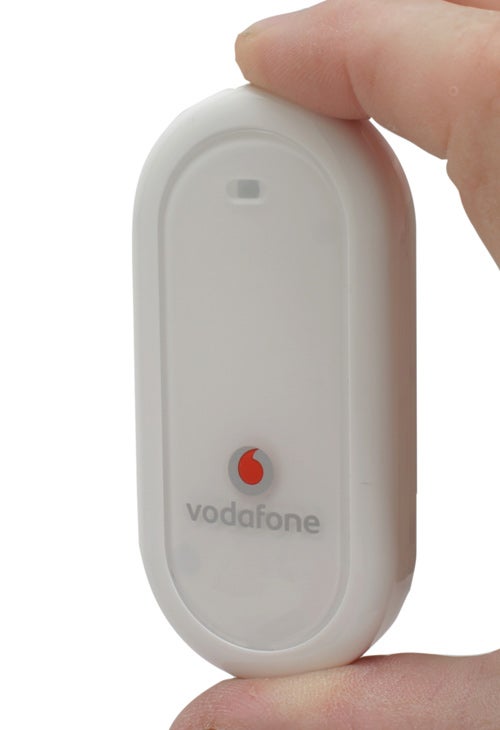 
When I reviewed the first Vodafone Mobile Connect Data Card I was very impressed and the competition struggled to keep up. When HSDPA rolled out though, T-Mobile stole much of Vodafone’s thunder, offering a near identical product with more data and a lower cost. Now however, the tables have turned and Vodafone has a product that will be the envy of all the other network operators.


The USB Mobile Connect Modem has the advantage of being truly universal, something that no data card – whether PC Card or Express card – can boast. The ability to hook it up to any Windows based computer, without the need to carry a driver disc makes it truly flexible. But it’s the fact that this device is compatible with both PowerPC and Intel based Apple Macs that makes it really special. With the MacBook offering great design, decent performance and a rock solid OS, many Windows notebook users are being tempted over to Apple, and now Vodafone is offering them a high-speed mobile data solution.


Yes it would be nice if the Apple driver could automatically load from the device like the Windows one does, but hopefully Vodafone will address that issue. As it stands though, this is the only HSDPA, or even 3G, EDGE or GPRS data solution for the latest batch of Apple notebooks (and some Windows ones). So, if you’re packing a laptop with no PC Card slot, you really want one of these.