The Vodafone Smart V10 is one of the best value smartphones available for around £100. It offers users a wonderfully clean install of Android 9, top notch battery life and an actually usable rear camera. The only minor issues are its slightly low-res screen and under-powered CPU.

The Vodafone Smart V10 is the latest affordable blower from network giant Vodafone. It may not have the wow factor of the Galaxy S10 Plus, but when you consider the fact it’s almost a ninth the cost, it manages to perform admirably well.

If you’re a parent on the hunt for an affordable phone for your kid, or a smartphone user that just needs the basics, then the Vodafone Smart V10 is a top-notch option. For £105 (pay as you go on Vodafone), you’ll get a reasonably decent looking phone that ticks all the boxes a budget phone should. Highlights include above-average battery life and an actually ok dual-sensor rear camera.

But, like all £100 phones, there are a few compromises.

Vodafone Smart V10 design – Decent, but a few corners have been cut

Out of the box the Smart V10 looks pretty darned good considering the price. The dinky bezel and teardrop front camera housing makes it look a little like a stripped-down Huawei P30, which is no bad thing.

The side and rear panel may be made of plastic, but feel solidly built and give the phone a more expensive look than you’d expect from a £100 phone. It’s also thinner and lighter than its arch-rival, the Moto G7 Play.

Having unleashed a rampaging four year old on the V10 Smart I can also personally attest that, despite the use of the less common 2.5D Dragontrail – not Gorilla – Glass to protect the phone’s screen, it is suitably scratch and crack resistant. After said child send the phone flying across a hardwood floor, after realising I didn’t have Frozen, the V10 Smart emerged undamaged.

But upon closer inspection you will spot a few corners have been cut. The biggest being the complete lack of a fingerprint scanner and the use of an older microUSB charge port. The absence of a fingerprint scanner is rare these days, but personally I didn’t find it too annoying after a couple of hours with the phone. There’s also face unlock, which can be used to unlock the phone. 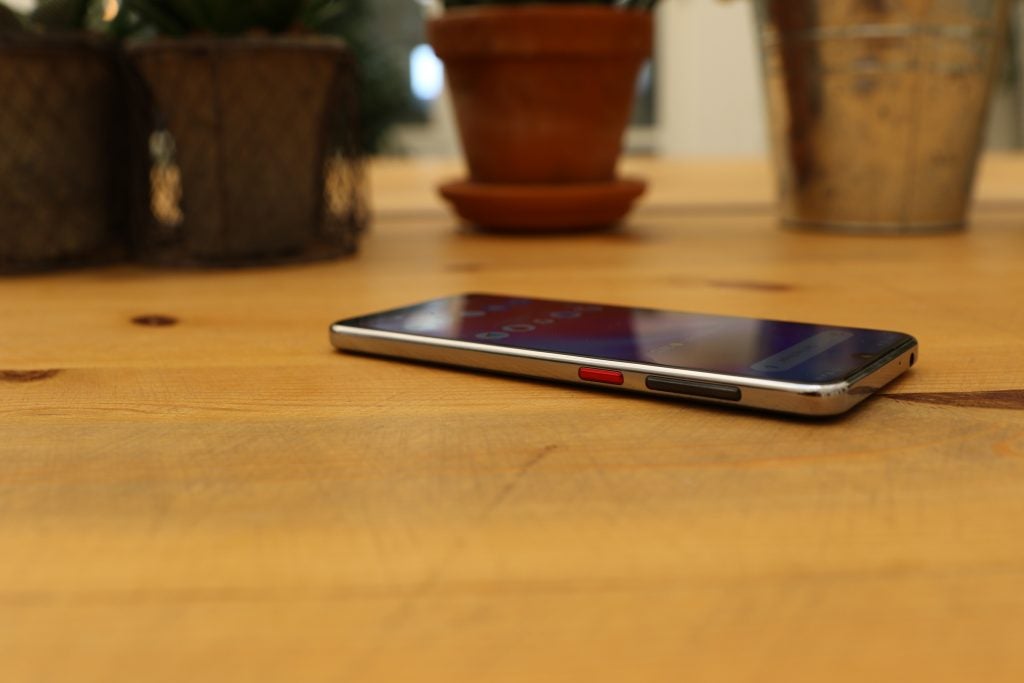 The use of a microUSB is a little more annoying. Most phones, even the budget ones, have made the jump to USB C. Having to switch back to the older, slower, cable standard is a minor, albeit forgivable annoyance.

Other small, but common, cuts have also been made. These include the absence of an IP water resistance rating and NFC connectivity, which means you won’t be able to use it to make wireless payments.

When powering it up you’ll spot that the 5.9-inch screen has a fairly low-res 720 x 1560 (HD+) resolution. If you’re switching from an even moderately more expensive handset you’ll notice the drop in resolution. But considering the fact every phone this price – including the G7 Play – is similarly low res, it’s hardly surprising.

The IPS panel is also fairly well set up. Whites are suitably clean and though blacks can look a little grey, it’s more than immersive enough for basic YouTube and Netflix viewing – though be warned the mono speaker is a little on the weak side. The only minor quibble I have is that its max brightness is a little low, which can make using it outside a little tricky. 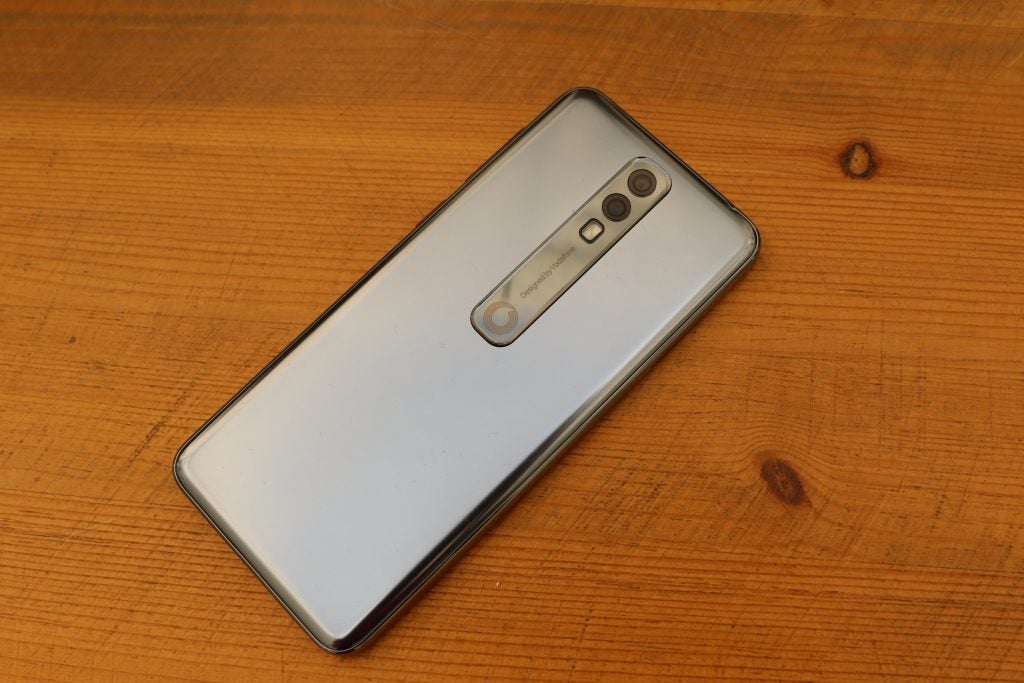 Dig under the surface and the Vodafone Smart V10 once again impresses. Despite being cheap, it gets a lot of the basics right. Two of the biggest achievements are its impressive battery life and nicely clean software.

As a rule of thumb I found the Smart V10’s 3400 mAh battery easily lasted around one-to-two days use on a single charge. Regular use entailed using it as my primary work and personal smartphone; taking and making a few calls, listening to music during my commute, watching a couple of episodes of Stranger Things and regularly checking my social media and emails.

During video streaming it lost between 8-10% of its charge per hour on average. Gaming drained it of around 15% per hour. Both these figures are impressive and mean it has more stamina than most of the flagship phones I’ve tested.

The battery life is likely helped by the V10 Smart’s wonderfully clean Android 9 install. Unlike most cheap phones the V10 Smart is blissfully clean of bloatware and duplicate applications, which generally eat up a handset’s battery by running in the background. The only notable addition is a custom parental controls app, which lets you do things like block certain apps and limit screen time.

So far so good? I think so. Trust me when I say the Vodafone V10 Smart is a great first phone for kids, or crash phone for adults, but there’s no getting round the fact for even moderately demanding users, it’s a little under-powered. 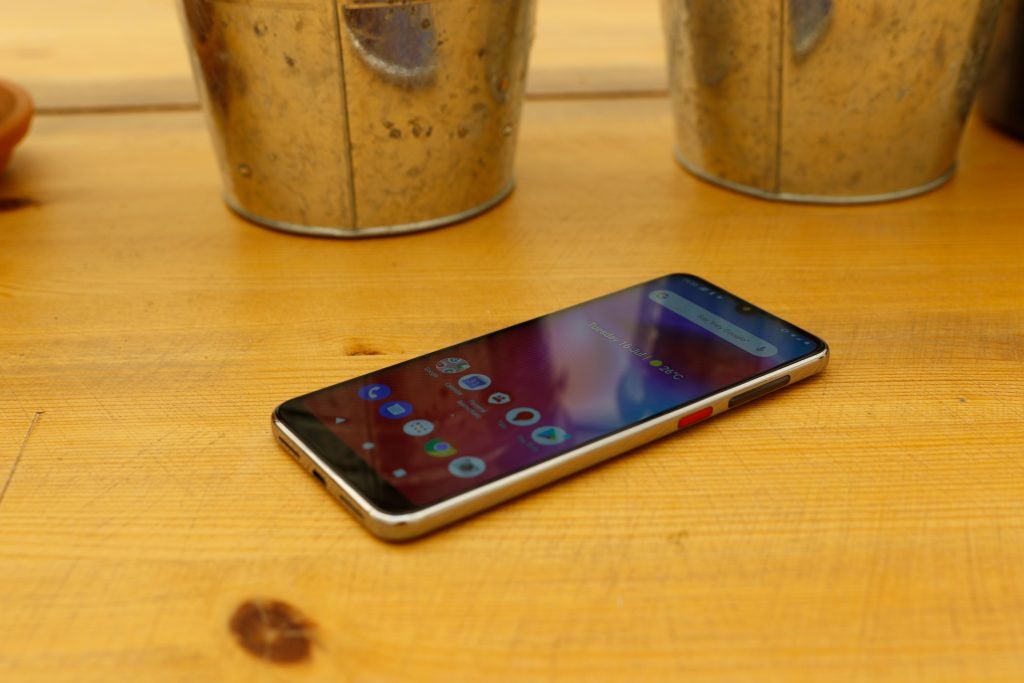 Its 3GB of RAM is more than reasonable considering the price, but I’m not convinced the Snapdragon 429 CPU is up for anything more than basic tasks. The phone runs fine for basic web browsing, but crank things up a notch and it quickly struggles. Having multiple apps or web browser tabs open can also lead to a few stutters. PUBG runs, but it is far from a smooth experience, so it’s just worth remembering if your kid’s an avid mobile gamer.

The same is true of the camera app, which can take its time to autofocus or take a photo after the shutter button has been pressed. Being fair to Vodafone, you’ll have the same problems on every smartphone this price.

Otherwise the camera is fairly impressive for the price. Round back you’ll find a basic dual-sensor setup that pairs 13-megapixel autofocus and 5-megapixel fixed focus sensors. In its auto setting the phone can take usable, even nice, photos in regular light.

Snapping around London photos are sharp and clear enough for sharing on social media – something you can’t always guarantee on a phone this price. The panorama mode works fine and, though you’ll pick up artefacts and anomalies viewing them on a big screen, the portrait mode is for the most part ok.

Low light photography is a no go, which is to be expected. Shooting in moderately dim conditions the camera will pick up noise, offer poor dynamic range and generally don’t look great. Again, this is standard for a phone this price and you won’t get better for £100.

You can see a selection of photos taken on the Vodafone Smart V10 below. 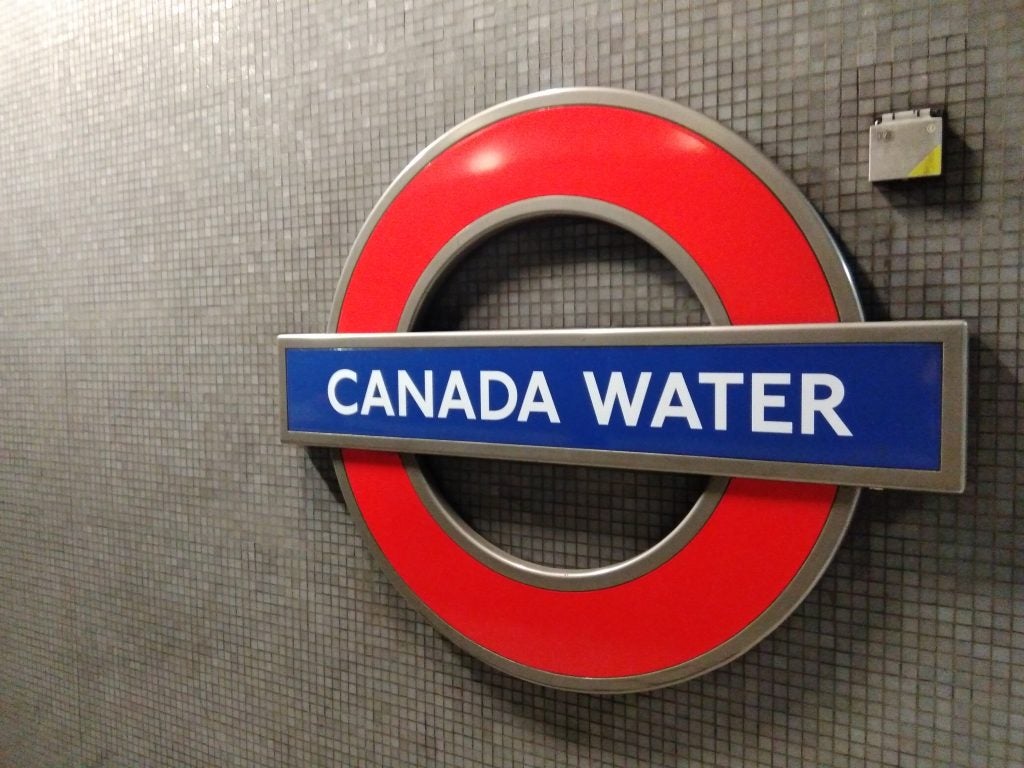 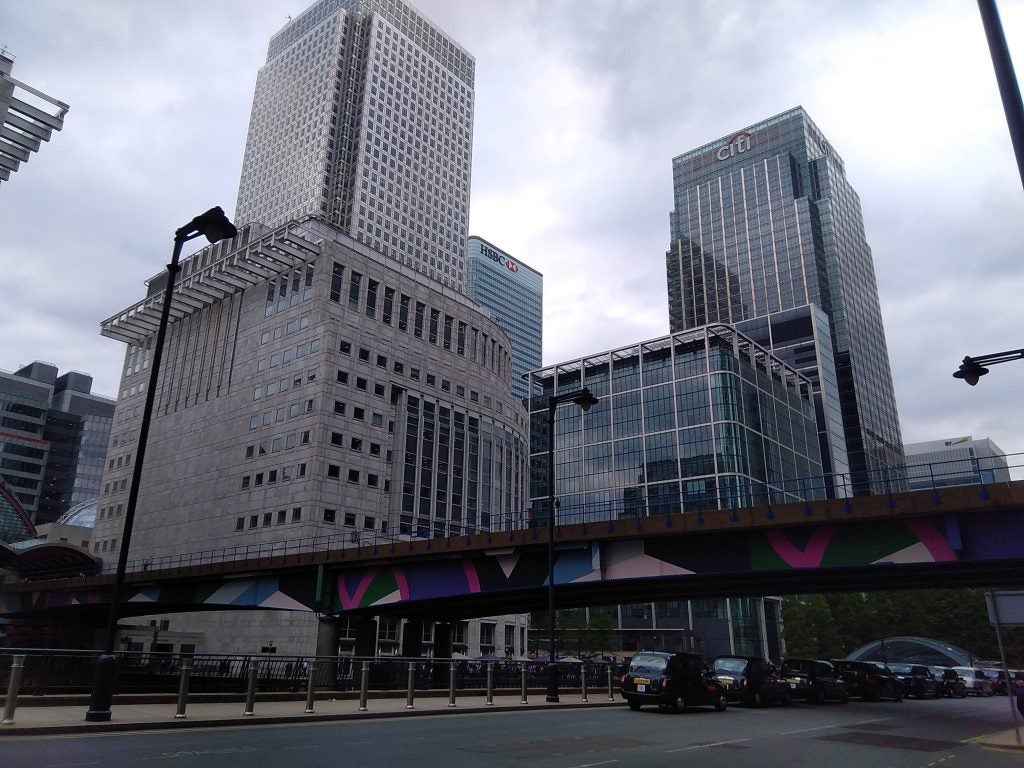 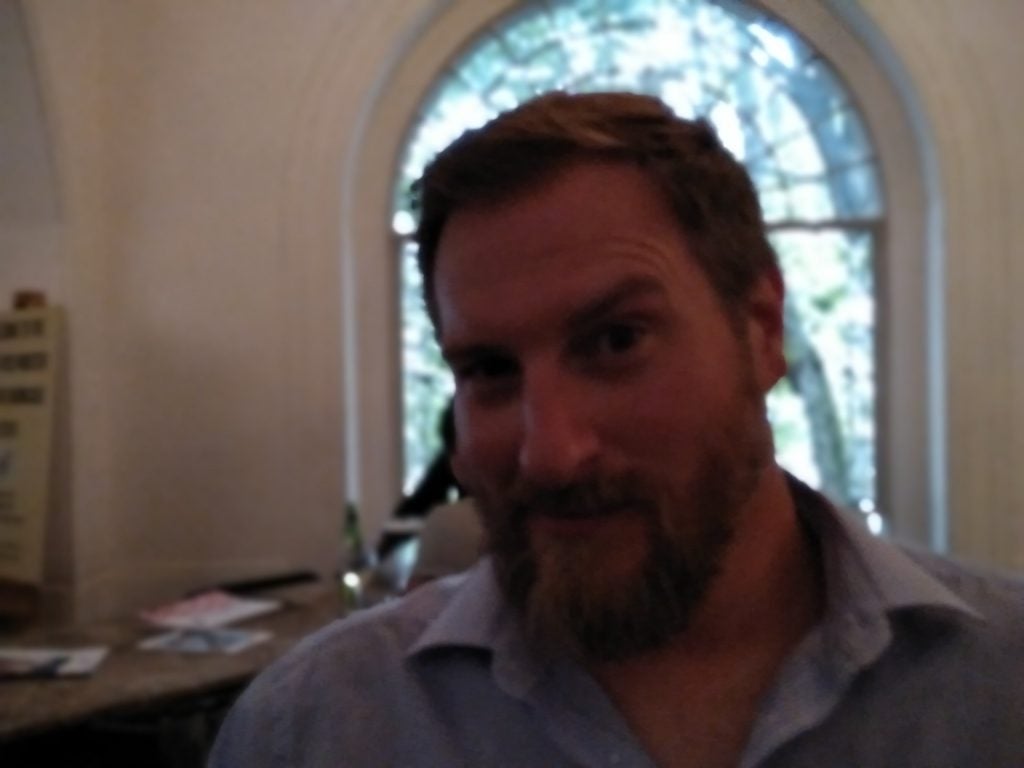 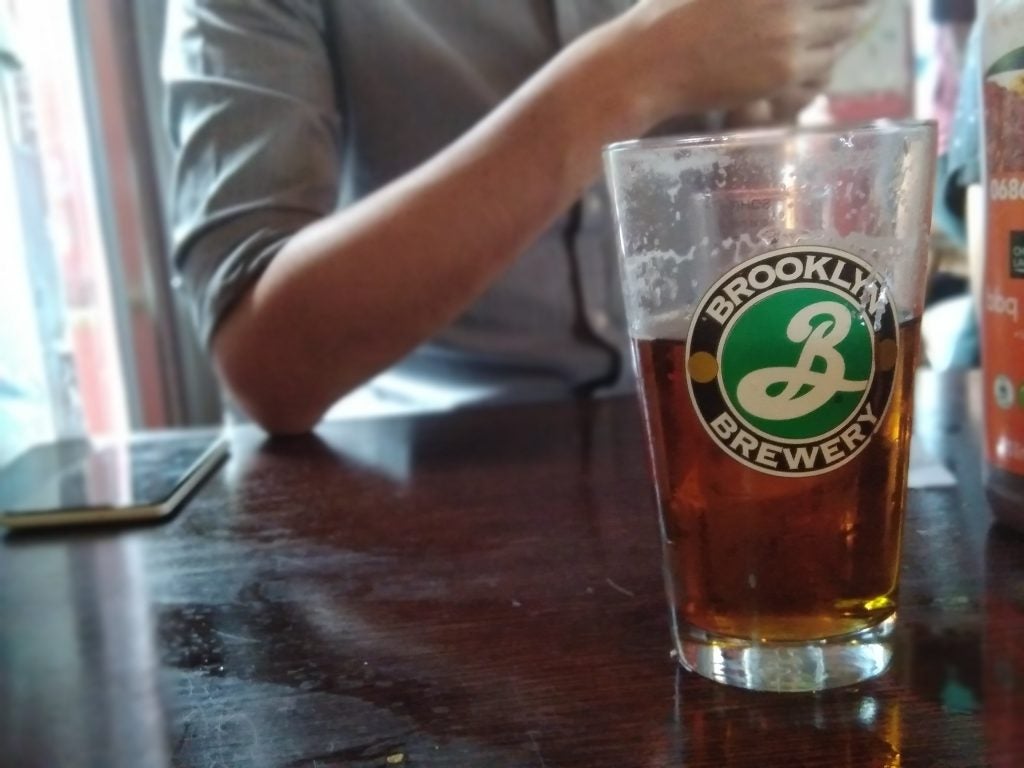 Should I buy the Vodafone Smart V10?

If you’re a parent on the hunt for your kid’s first smartphone, the Vodafone Smart V10 is a solid choice. The phone offers good build quality, excellent battery life and a clean Android install complete with easy to use parental controls.

If you’re after a festival or crash phone to tide you over until your next upgrade, it’s an equally solid option – though you’ll need to be on Vodafone’s network. The only downsides are that, like every phone this price, performance could be better and its screen is a little low res.