What is the Vodafone Smart N8?

For evidence that the general standard of smartphones is at an all-time high, look no further than the Vodafone Smart N8.

This isn’t a high-end iPhone killer in the way of the Samsung Galaxy S8, or a mid-range champion such as the OnePlus 5. Indeed, it isn’t even a particularly great phone in – and of – itself.

What’s remarkable about the Vodafone Smart N8, however, is that it provides a solid and eminently usable smartphone for well under £100.

The Vodafone Smart N8 has the kind of plain, unremarkable looks you might expect of a budget phone. Its clean front makes it impossible to distinguish from any number of other low-to-mid-range Android handsets, with only a recessed speaker and earpiece providing any discernible detail.

Around the back you get a removable plastic cover with a tightly lined, slightly angled texture that makes the phone a little more interesting to look at. More importantly, though, it lends the phone some grip. 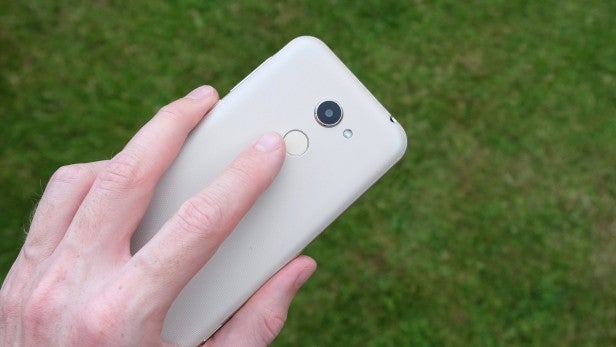 This rear cover is well affixed to the body of the phone, too – it’s quite a job to prise the multiple connection points away from the chassis. You’ll need strong fingernails if you want to access the SIM or microSD slots; it isn’t possible to remove the battery.

Our test model came in a colour described as ‘Gold’, but which I’d more accurately describe as ‘Champagne’. Either way, it isn’t as classy as it sounds, and the darker ‘Graphite’ model seems like a better bet all-round.

The volume and power buttons sit in their usual position on the right-hand edge of the phone, and they’re just a little more textured than the rest of the surrounding plastic rim. Combined with the fact that these buttons are raised slightly, it makes them pretty easy to locate by feel alone.

All in all, this is a comfortable phone to hold. At 8.65mm thick, it’s a little tubbier than its predecessor, the Vodafone Smart Prime 7. However, a weight of 151g ensures that the Smart N8 sits in that sweet spot for smartphones where it has a certain reassuring heft without being cumbersome.

One other design feature of the Vodafone Smart N8 is notable by its omission – there are no capacitive control buttons underneath the display this time around. Instead you have to rely on virtual back, home and multi-tasking keys within the Android OS itself. It might sound like a big deal, but it’s remarkably easy to get used to thanks to the seamless way Android integrates these controls.

By far the biggest and most successful design touch here is the Vodafone Smart N8’s rear-mounted fingerprint sensor. That Vodafone has managed to get such a biometric access feature on an £85 phone is noteworthy enough. That it actually works well is quite remarkable. 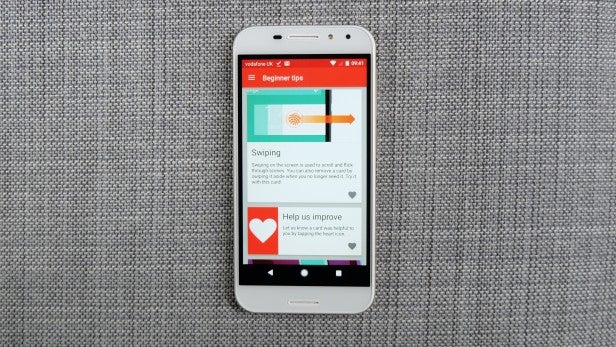 Until quite recently, sticking a fingerprint sensor on anything less than a top-end phone would have been ill-advised, so finicky were anything but the top models application. Here in the Vodafone Smart N8 it works the majority of the time, and while unlock speeds aren’t red hot, I suspect that’s more to do with the phone’s humble processor.

The Vodafone Smart N8’s 5-inch IPS display feels positively petite next to most modern Android phones, although it would seem pretty normal to an iPhone user.

Similarly iPhone-like is the Smart N8’s display’s 720p resolution, which feels reasonably sharp on a phone of this size. I was pleasantly surprised by how bright and clear it was too, since this is often one of the main areas of compromise in an entry-level phone.

Don’t get me wrong, the colours don’t pop as much as a mid or high-end phone, and you’ll notice a considerable drop in visibility when you stray outside. It’s far from disastrous, though, and when indoors I was perfectly happy to leave the brightness setting at around the 50% mark. Viewing angles are pretty decent, too, thanks to the use of an IPS panel. That’s hardly a new technology, but you can’t take such things for granted when a phone is being put together for a price that’s roughly half what we’ve come to expect from a ‘budget’ phone. 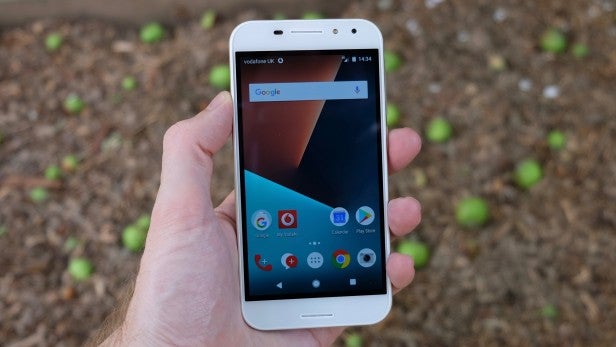 Equally encouragingly, I didn’t notice any of the response issues that some experienced with last year’s Vodafone Smart Prime 7 at launch. Indeed, my one real gripe with the Vodafone Smart 8’s screen is the ugly black border that surrounds it. It’s one of the most telling signs that this is a cheap phone.

Talking of signs that you’re dealing with a cheap phone, the Vodafone Smart N8 runs on some very humble silicon. While the eagle-eyed and tech savvy will be able to tell as much within a few minutes of using the phone, most casual and first-time users will have a perfectly decent experience. We’re looking at a MediaTek MT6737 CPU here, which is a quad-core processor clocked at 1.25GHz. It’s a decidedly low-end chip that’s evidently being used as a cost-saving measure on Vodafone’s part.

General performance is adequate despite this fact, although if you happen to be stepping down from a more premium handset then you’ll instantly pick up on some slight but consistent pauses and hitches during use. It’s nothing critical – just minor stutters when moving to a new screen or scrolling through your calendar entries, or a slightly-too-long pause when loading up a web page in Chrome.

Part of this can probably be attributed to the Smart N8’s 1.5GB allotment of RAM. In general, 2GB tends to be the minimum level at which you can hope for a smooth Android performance, but you’d need to double your money – such as on the Wileyfox Swift 2 or the Moto G5 – to get such a spec. Indeed, even the £100 Moto E3 can only scrape together 1GB of RAM, so you’re more than getting what you pay for here.

Geekbench scores of 532 for single-core and 1522 for multi-core suggest a considerable improvement over the Vodafone Smart Prime 7 with its 331 and 1,070 – although it should be noted that there’s a margin for error there due to the move from Geekbench 3 to Geekbench 4 over the past year. 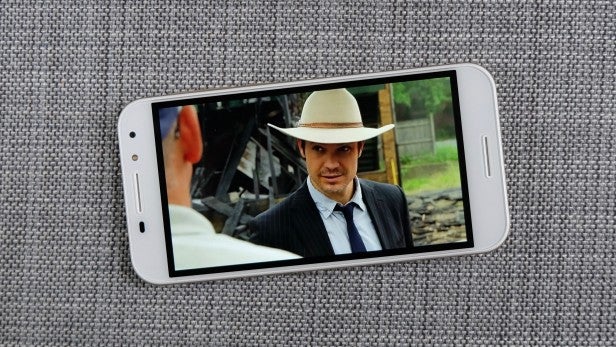 In terms of specific real-world tasks that stretch the N8 hardware, recent online first-person shooter Guns of Boom was surprisingly playable here. Performance became a little stuttery when the screen got busy, however, and the game caused the handset to get rather hot. It was clearly pushing the Smart N8 to its limits.

Elsewhere, the graphically lush battler Oz: Broken Kingdom loaded up alright, but tended to slow down when the real pyrotechnics began. Less demanding 2D fare such as Guns Of Mercy ran just fine. Basically, you wouldn’t want to buy the Vodafone Smart N8 if you’re a committed mobile gamer, but most of the games on the Google Play Store should be available to you for the odd bash.

One spec that’s an undeniable improvement here is the Smart N8’s storage. It comes with 16GB as standard, which isn’t a huge amount in the grand scheme of things, but is good for an entry-level phone. Both the Moto E3 and the Vodafone Smart Prime 7 had just 8GB, which is borderline unusable without microSD augmentation.

Speaking of which, it’s worth reiterating that there’s a microSD slot here – although it will accept only up to 32GB of additional storage. That’s a little measly, but I doubt the target audience for the Smart N8 is going to be hardcore media consumers.