1980s retro styling aside, this all-in-one system delivers a solid sonic performance that will elevate the audio of any budget TV. Connections are limited, and DTS Virtual: X processing can’t work miracles, but overall this soundbar offers great value for money

Vizio might not be a familiar name to some, but the company is the second-largest maker of TVs in the US, and the largest manufacturer of soundbars.

The Vizio SB362An is its first foray into the UK soundbar market, with a competitive price that leverages off the back of those hefty economies of scale.

The SB362An is a 2.1-channel all-in-one soundbar, with forward-firing stereo speakers and a pair of built-in woofers. Not surprisingly, given its price the  features are limited. But you do get optical digital, Bluetooth and support for DTS Virtual:X, allowing this soundbar to elevate the sound of any average TV.

The Vizio SB362An has an unusual design; it’s best described as 1980s sci-fi chic. In fact, the soundbar looks like it fell off the Battlestar Galactica, with its angled end-plates and hexagonal shape.

There’s a wrap-around black fabric grille that covers the top, front and rear, and build quality is fairly good considering the price point. You have the option of simply placing the soundbar in front of your TV, or wall-mounting using an included template and brackets. 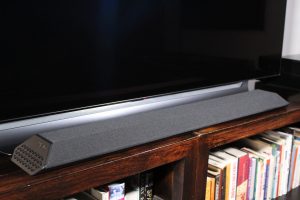 There are a series of triangular holes at its ends, although they appear to be purely decorative since there are no side-firing drivers. On the right, as you face the SB362An, sit some basic controls that are also triangular in shape. These controls comprise power on/off, source, Bluetooth (hold down for pairing), and volume up/down. 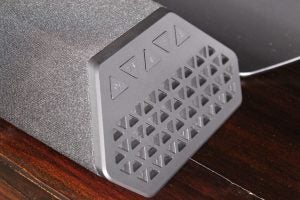 The included remote is better than you’d expect for a budget soundbar – it’s fairly big, well made and comfortable to hold. All the controls are located in the upper half of the unit, with power, input and Bluetooth at the top.

Beneath these controls are buttons for volume and playback, and under those you’ll find buttons for DTS TruVolume, mute and engaging DTS Virtual:X. Finally, there are buttons for adjusting the bass and treble, as well as choosing between two EQ modes (Music or Movie). 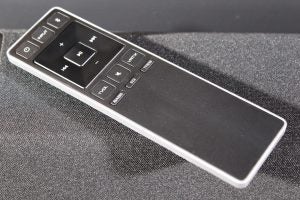 The Vizio SB362An is hardly feature-packed, but you wouldn’t expect that from a budget soundbar. The main emphasis is on sound quality, and to that extent the SB362An is surprisingly well apportioned. Each of the two forward-firing speakers includes a 2.5in full-range driver and a matching tweeter. There are also two 3inh woofers to handle the lower frequencies. 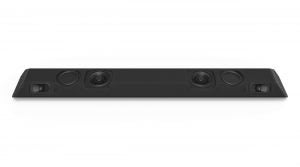 Regardless of which installation you choose, the SB362An is designed to produce a sound that’s bigger than its relatively small size would suggest, making it ideal for TV screen sizes up to 55in. In addition, the height shouldn’t block the screen and the black fabric finish won’t reflect it either, ensuring the Vizio doesn’t detract from the picture.

The SB362An supports Dolby Digital, although its decoding is obviously limited to 2.1 channels. It also includes DTS Virtual:X, which creates a virtual surround experience using psychoacoustic processing. You can toggle this on and off using the VRT:X button on the remote, and while the mode doesn’t create a genuine surround experience, it does give the audio greater presence.

Other features include the DTS TruVolume mode (TVOL on the remote), which is intended to deliver a consistent and comfortable volume level. This is useful when watching commercial TV channels with advert breaks.

There’s also the Equaliser mode, with a choice of Music or Movie settings – the latter is the default. You can toggle between the two using the EQ button on the remote, and the music mode emphasises the two channels, while the movie mode boosts the bass. 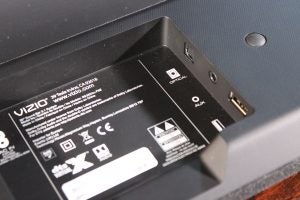 The physical connections are located in a recessed area on the underside of the soundbar. There’s space here to run the cables through, thus allowing the soundbar to sit flat on a cabinet or flush against a wall. The connections are fairly basic, with only an optical digital input, a 3.5mm analogue input, and a USB port for music playback from a thumb drive (WAV and MP3 only).

There’s no HDMI connection, so you can’t benefit from ARC (audio return channel) or CEC (consumer electronics control). However, the optical digital connection works well. Vizio helpfully includes optical, 3.5mm to 3.5mm and RCA stereo to 3.5mm cables in the box, and there’s also built-in Bluetooth for a wireless connection.

The Vizio SB362An is a piece of cake to set up: place the soundbar in front of your TV, and for the highest-quality audio simply connect the two using the provided optical digital cable.

The more solid the surface on which you place the Vizio, the better the sound quality – but you also have the option of mounting against the wall. If you want to pair the SB362An with a Bluetooth device, just hold down the dedicated button on the remote control or at the side of the soundbar.

The soundbar is equally easy to operate on a day-to-day basis, largely thanks to the surprisingly effective remote control. The only real issue with the SB362An is that it doesn’t have a proper display, just a series of LEDs located in the centre of the leading front edge of the soundbar.

These LEDs use different permutations to indicate the various modes and settings, but if you can remember them all then you deserve a medal. 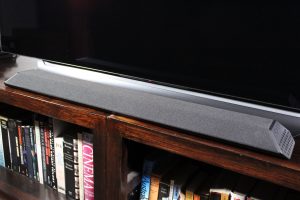 The SB362An might be a budget soundbar, but it sounds surprisingly good. The fact that Vizio has used decent tweeters, mid-bass drivers and woofers is undoubtedly a factor, and the configuration of the speakers ensures a sizeable soundstage.

There’s also a decent amount of amplification, although Vizio doesn’t specify how much. However, the soundbar has sufficient grunt to fill a medium-sized room.

In fact, you really need to drive the SB362An quite hard before the amplification runs out of steam, with the sound becoming strained and brittle. However, if you stick to a sensible volume level then you’ll be rewarded with an accomplished stereo performance that benefits from good imaging, some nice detail retrieval, and a well-defined mid-range. The higher frequencies are also nicely delivered, and remain free of sharpness or sibilance. 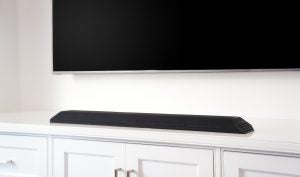 The basic two-channel design makes this soundbar a great all-rounder, whether you’re listening to music, catching up on your favourite TV show, or watching the latest Hollywood blockbuster.

Thankfully, the lack of a centre channel doesn’t appear to affect the intelligibility of dialogue, and the SB362An does a good job of spreading music and effects either side of the screen. There are no surround channels, but the DTS Virtual:X mode gives the audio greater three-dimensional depth.

The obvious limitation of this soundbar is in terms of its low-end extension. Put on a film such as Godzilla: King of the Monsters and the lack of serious bass impact is immediately obvious. In fairness, the Vizio does a pretty good job for a single-unit solution. However, compared to a soundbar that uses a separate subwoofer, there’s a distinct lack of low-end slam.

That gripe aside, this is a surprisingly effective budget soundbar that makes for a great all-in-one system.

Should you buy the Vizio SB362An?

If you’re looking for a cheap and cheerful soundbar that can boost the audio performance of your adequately priced TV, the Vizio SB362An is just the ticket. It’s competitively priced and reasonably well made. While the design is a bit 1980s sci-fi, it will slot neatly in front of your TV or on the wall.

There’s no support for HDMI, but you get optical digital and Bluetooth, plus the remote is better than expected at this price. Crucially, it actually performs well, with a sound that’s bigger than you expect. There’s a detailed delivery, with enough power to fill a medium-sized room.

The stereo imaging is good, the mid-range well defined, and dialogue remains clear. The bass could be better, but it isn’t bad given there’s no separate subwoofer. The soundbar can decode Dolby Digital, and while the DTS Virtual:X can’t work miracles, it does open up the sound.

You’ll struggle to find a better soundbar that’s cheaper than the Vizio SB362An, but there are a number that come close. The Wharfedale Vista 200S is a good example, and although it costs a bit more at £179, it does include HDMI-ARC and a separate wireless subwoofer.

Another option is the Polk Command Bar. Not only is it impressive sonically, but it also has a separate wireless subwoofer. There’s an HDMI input and an output with ARC, and you also get Amazon Alexa built-in. Best of all, the Command Bar will only set you back £249.