Please Note: While this is an in-depth review of the Vivo Nex S, we haven’t yet given it a score. This is because the phone isn’t yet set up for UK or US users, and it’s already significantly better today than it was when it first arrived in the Trusted Reviews offices in June. We’ll wait for it to launch with software that’s fit for purpose before we give the Vivo Nex S a review score.

What is the Vivo Nex S?

You might have heard of Vivo and the Vivo Nex S only quite recently. This is because ads for the Chinese smartphone manufacturer have been plastered all over World Cup 2018 hoardings. This is a company that isn’t afraid of making a big splash – and with good reason. The Vivo Nex S is the most interesting smartphone I’ve used in years.

It has a true all-screen design, a fingerprint scanner built into the display, great battery life, and some of the most powerful hardware components found in any current phone – and this includes heavyweights such as the Samsung Galaxy S9 and iPhone X. Where the OnePlus 6 impresses when it comes to bang-for-buck, the Vivo Nex S shoots for the stars with innovations we’ve never seen on any phone before. Although, the equally exciting Oppo Find X is following hotly on its heels.

The question is whether the Nex S delivers on its promise; and the answer is, yes – broadly. It isn’t perfect by any means, not least because it isn’t set up for US or UK consumers. It shouldn’t really be bought by anyone who lives outside China, at least until the software is updated significantly for an English-speaking consumer.

It’s also lacking features that are now familiar in flagship phones, such as wireless charging and water-resistance – but these issues don’t concern me as much. The Vivo Nex S isn’t available from well-known retailers, but can be bought in the UK for around £640.

The Vivo Nex S comes with a huge 6.59-inch screen that dominates the front of the phone. The bezel is millimetre-thin all round, except at the bottom of the Nex S, where it’s a little thicker. Still you get more screen here than you do on the Samsung Galaxy S9 Plus for only a little extra height and girth. In fact, it’s very similar in size to the iPhone 8 Plus, but that device has only a 5.5-inch screen.

The Vivo Nex S measures 162 x 77 x 8mm. Yes, this is a massive phone, but it isn’t unusable. It’s 6mm narrower than the Nexus 6, which was the last phone I used that I found to be just too big for comfort.

At 199g it’s heavy, too – heavier than almost all of its competitors. However, I like the reassurance of a heavy phone, and the extra 10 or so grams don’t hugely matter.

I also like the 3D glass rear that curves with your palm as you hold the device. It isn’t a million miles away from the latest Samsung Galaxy phones or even the Moto G6, and like those phones the Nex S feels classy.

There are no physical buttons on the front or rear of the phone. Instead, you get a power and volume rocker on the right of the device and a Jovi AI assistant button on the left. Jovi is the name of Vivo’s AI software. 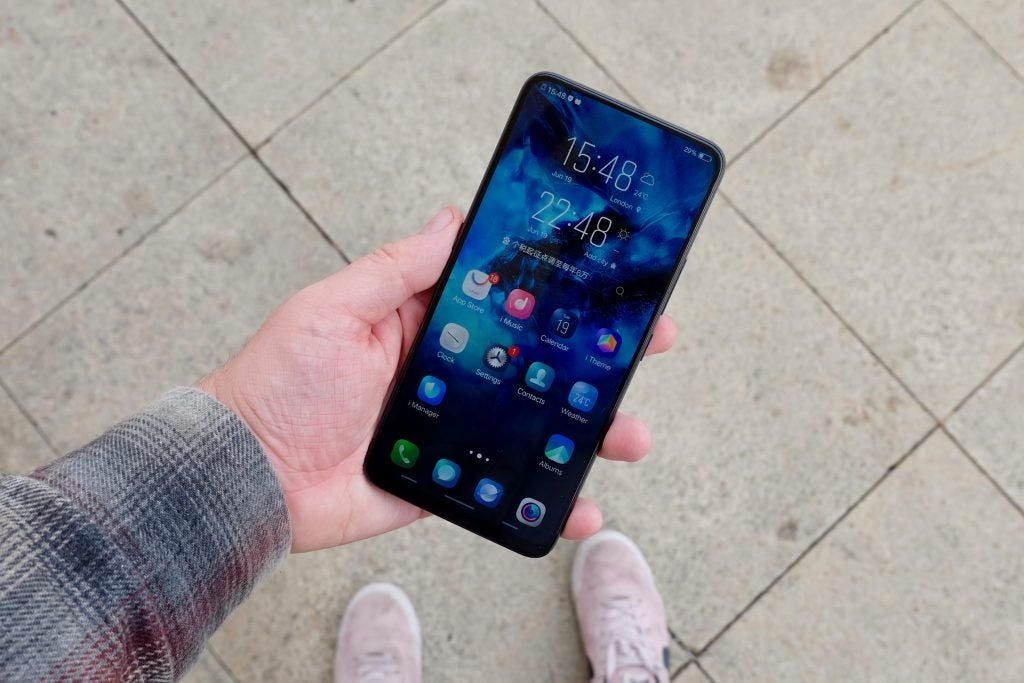 The buttons are easy enough to get to, but I found the AI button too easy to press with the phone in my pocket, which resulted in pausing calls, music and podcasts for a few seconds every time. It wouldn’t be such an issue if  the AI assistant could understand English, but it can’t. It also isn’t possible to change the button’s function or even disable it like you can with the Bixby button on the Galaxy S9.

The first headline feature of the Vivo Nex S is the hidden selfie camera. Instead of living in a large bezel or notch, similar to the iPhone X or OnePlus 6, the front-facing camera on the Vivo pops up from the roof of the phone.

This is a neat solution to the issue of hampering the screen, and it feels well put together – but it also looks vulnerable to drop damage. This is a bigger problem than you might initially believe: on rare occasions, the camera popped open with the phone in my pocket, and didn’t close – even with the screen off. 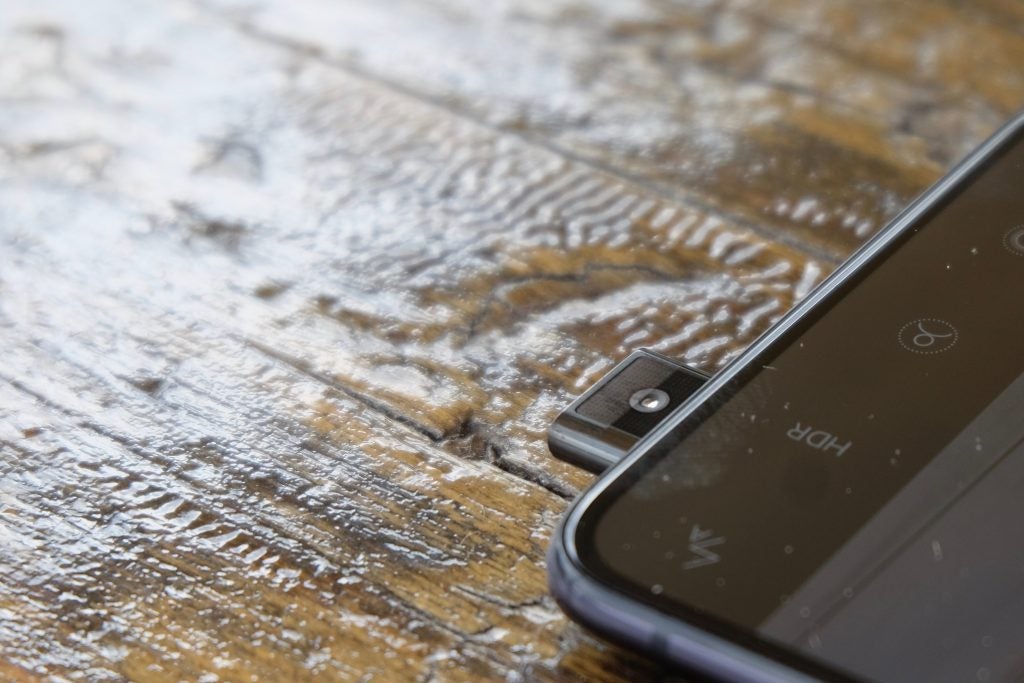 Vivo has packed a huge 6.59-inch screen into the Nex S, but it isn’t just its size that matters. The Super AMOLED display pops with colour and vibrancy and is plenty bright, too. Even in London’s unseasonably sunny summer, I haven’t encountered any issues seeing what’s on-screen, and it’s no more reflective than any other flagship out there.

Sharpness, too, is excellent. The 1080 x 2316 pixel resolution with its 388 pixels per inch (PPI) may not match the Galaxy S9 Plus’ 529ppi, but unless you manage to cram the Nex S into a VR headset, you won’t notice a difference.

There are a couple of issues, however. The first is that the screen is a little oversaturated, particularly when it comes to red and yellow hues. In my opinion it could do with a little toning down, but there are those who prefer a screen that’s steeped in colour.

It’s a shame that we can’t have the best of both worlds. There’s no screen settings to tweak, or preset display modes – other than brightness and Eye Protection. That’s Vivo’s version of night mode, reducing the amount of potentially harmful blue spectrum light in the evenings.

The screen also hides the Vivo Nex S’s second headline feature: a fingerprint scanner concealed under the display. A faint fingerprint appears near the bottom of the screen when you move the phone or touch the screen. This lets you know where to rest your finger – and when you do, a bolt of Matrix-style green electricity looks like it’s powering a circuit board.

It’s a wonderful bit of future-tech that’s falling slightly short of the mark. When it works, it’s fast and stylish. The issue is that the miss rate is a little too high, meaning you’ll need to type in your PIN several times a day to get access to the phone. I’ve yet to figure out the issue. Sometimes, it will work fine in bright sunlight; sometimes, it won’t. At other times, in the dark, it will refuse to unlock, but the following evening it will work a treat. Perhaps software tweaks will improve matters. 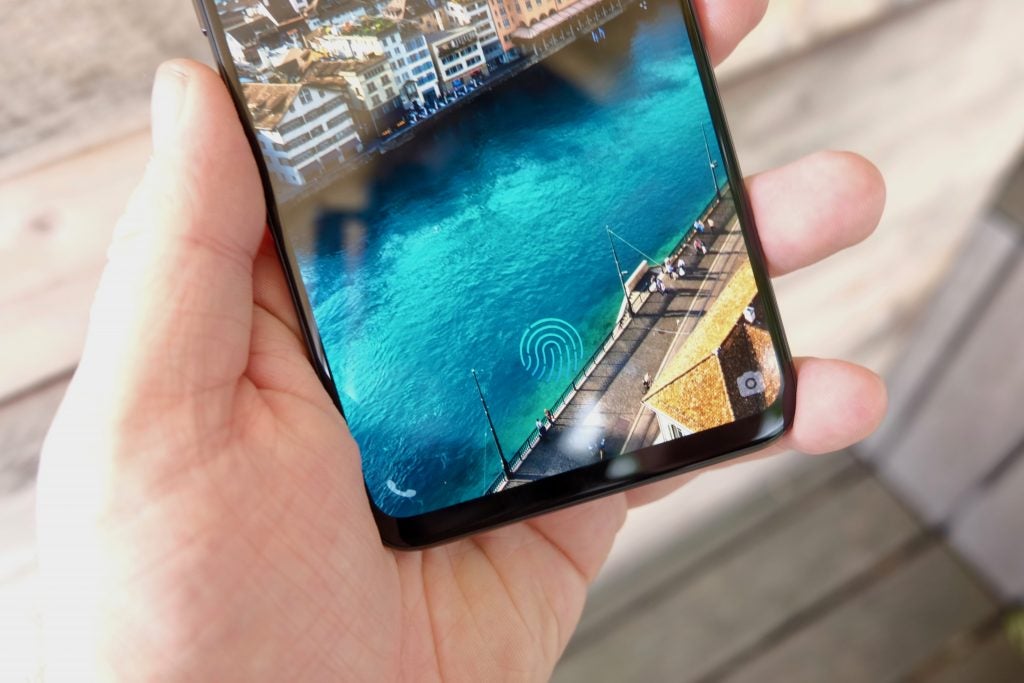 Then there’s the question of how secure it is compared to traditional fingerprint sensors. I do wonder whether it will ever support the likes of Google Play and banking apps.

The Vivo Nex S’s magic screen has one last trick to pull – it’s also the speaker. Instead of a speaker grille that takes away valuable screen real estate, the display works as a sound amplifier.

Vivo calls this ‘Soundcasting Technology’, and it works. Voice clarity is solid during calls, and it’s also quite loud for a phone. You can happily watch some of your favourite programmes on the the Vivo Nex S’s huge screen, if you don’t want to use headphones.

It’s a little flat when listening to music; it can’t compete with the likes of the stereo speaker-toting iPhone 8 Plus in that respect. Still I’d take the small hit in sound quality in exchange for all that extra screen any day.

If you do want to plug in a pair of headphones then you’re in luck. The Vivo Nex S comes with a 3.5mm headphone jack, as well as supporting Bluetooth 5.0 for those who have turned to the wireless side. It packs a solid DAC, too, so sound quality using headphones is impressive.