What is the Vivitek QUMI Q5?

The QUMI Q5 is a very stylish £500 ‘pocket’ LED projector with a high brightness of 500 ANSI Lumens, an HD resolution and a surprisingly long feature list for such a portable device. 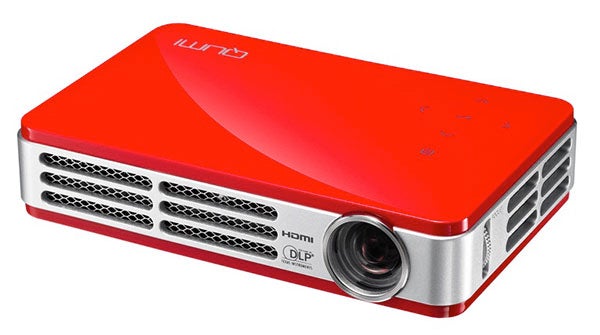 If there’s a cuter projector than the QUMI Q5 we haven’t seen it. For starters it’s strikingly small, using a ‘Pico’ LED DLP optical configuration to deliver its projected images from a box that’s just 10.2cm deep and 16cm wide. It’s light too, only burdening your jacket pocket to the tune of 499g.

Its curved corners and low profile are easy on the eye as well, but its real show-stopper is its thick, ultra-glossy top sheet, which is available in no less than five different colour options: black, white, blue, red and yellow.

Despite the small space available on its rear, the QUMI Q5 manages to squeeze in a decent suite of connections. Particularly handy is a v1.3 HDMI input able to handle both PC and video feeds, immediately raising hopes that the Q5 will be able to do decent double duty as both a business and home entertainment projector. 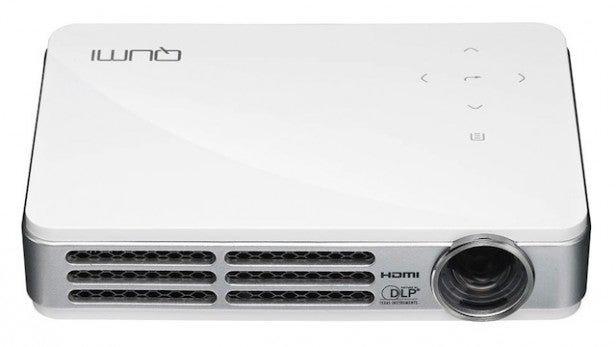 There’s also: a USB port that can be used for direct, cable-free playback of multimedia files and documents stored on USB memory devices; a universal i/o port you can use for connecting pretty much anything so long as you get the right adaptor cable; a 3.5mm AV input; and a 3.5mm audio output.

You can even connect your laptop, phone or other smart device to the QUMI Q5 wirelessly if you stump up more cash for the optional Wi-Fi dongle.

If you’re paying attention you’ll have noticed earlier that we mentioned that the QUMI Q5 can play documents direct, with no PC required. This is because it carries built-in Office Viewer software, able to parse PowerPoint, Word, Excel and PDF documents.

The QUMI Q5 can be controlled via a small but effective and – that word again – cute little remote control, or by helpfully illuminated buttons on its top edge.

As with almost all DLP projectors these days the QUMI Q5 can deliver 3D playback via the DLP Link system. We weren’t provided with any glasses for testing this, however – and in any case, experience suggests that 3D doesn’t tend to work particularly well on ultra-portable projectors due to their lack of brightness.

Not that the Q5 is likely to be as lacking in brightness as many of its peers. For its claimed light output of 500 ANSI Lumens is one of the higher figures seen to date from the pocket projector market. This raises the prospect of its images remaining viewable even if there’s some ambient light in the room (a particularly handy trick for a presentations projector), as well as increasing the potential size of images it can deliver.

The last specs worth mentioning in this section are the QUMI Q5’s decent 1280×800 native resolution (giving a PC- rather than video-friendly 16:10 aspect ratio), a promising claimed contrast ratio of 10,000:1, and a colossal 30,000-hour lamp life. This latter trademark feature of LED lighting technology essentially means that the lamps last for the full life of the projector; you’ll never have the expense and hassle of changing one.

Getting an image from the Q5 on your screen or wall is pretty straightforward. You just point it in the right direction, turn it on and – since it has no optical zoom – move it backwards or forwards to get the image size you want. Then there’s just a simple focus wheel beside the lens.

You’re even provided with an effective auto keystone feature that gets the edges of the image straight for you with no need to waste time mucking about with the manual keystone option.

For form’s sake we should mention that the Q5 does provide a degree of digital zoom, but we’d never recommend that you use this since it tends to make the image look noisy and soft. 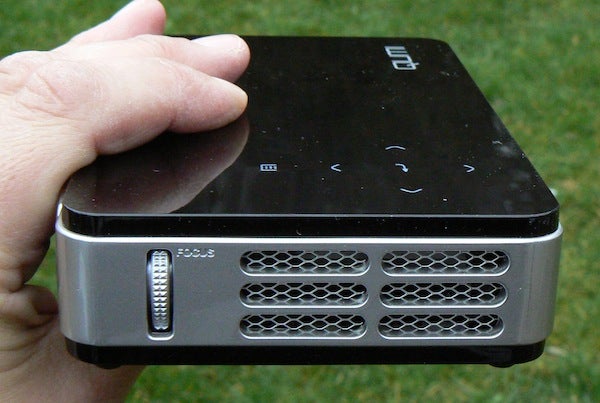 The Q5’s onscreen menus carry a startlingly long list of picture fine tuners. The simplest starting point is the wide range of picture presets, which include Movie, Game, TV, sRGB, Bright and Presentation options – as well as a couple of user settings.

This varied range of presets again points towards real ambition on the Q5’s part concerning the sort of material it’s willing to work with – and in doing so potentially helps justify that rather high £500 price tag.

Beyond the basic presets, calibration options include the DLP Brilliant Colour system for boosting colour saturations, colour space and colour temperature controls, and a selection of gamma presets that underline the potential multi-purpose flexibility of the projector by including Video and PC settings.