Pocket/pico projectors are a great idea, there’s no doubt about that. Being able to carry around in your pocket a display device capable of producing images up to 90in across at the drop of a hat is brilliant. The feats of technological miniaturisation involved with Pico projectors appeal strongly to our inner geek, too.

However, the vast majority of pico projectors have a ‘little’ problem. Namely that they’re rubbish. Or at least, they’re rubbish if you value picture quality in any way whatsoever. Some of the smallest models we’ve seen are so short of brightness, for instance, that they struggle to produce a picture where you can even see what’s going on. 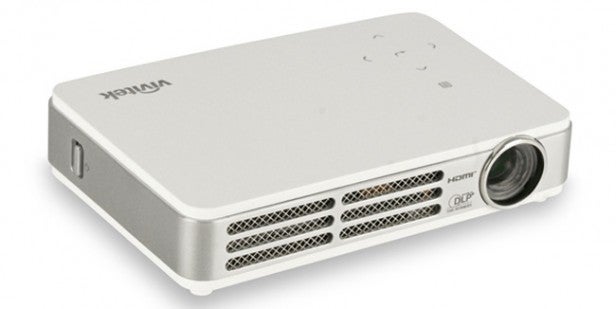 Cue the Qumi (pronounced Q-me) Q2. This Vivitek model has supposedly been designed and built from the ground up to address the usual quality issues, backing this claim up with such impressive stats as a 300-lumen brightness output capable of driving an image of up to 90in, and an even more startling 2500:1 contrast ratio. Plus, remarkably, the Qumi is 3D-Ready, if used in conjunction with a DLP-Link system.

This is all despite the fact that the Qumi is very much still pocket-sized. It measures 160(w) x 31(h) x 100(d)mm in its cotton socks, and weighs just 617g – and it ships with a carry pouch to protect it from damage from all the other junk you probably have tucked away in your pockets.

As well as being small, the Qumi is also really rather lovely with its low profile and its gleaming and impressively robust white and grey bodywork (a black version is also available).

At the heart of the Qumi, as you would expect, lies an LED light source and a Texas Instruments Single Pico DLP optical system. The life of the LED light – and, effectively, the projector – is quoted at 30,000 hours, while the chipset delivers a native HD WXGA resolution of 1280×800.

As usual with Pico projectors there’s no optical zoom facility; the throw ratio is locked at 1.55:1 (distance/width). There is a pleasingly ‘tight’ focus wheel down the projector’s right side, though, and the projector is equipped with keystone correction and digital zoom tools. As ever, though, you should bear in mind that Keystone and digital zoom tools inevitably distort the image. So avoid them if you can.

Tucked under a removable panel on the Qumi’s rear is a satisfying roster of connections. These kick off with a mini HDMI input, for which a handy – if extremely short! – HDMI-to-mini-HDMI capable has been included.

There’s also a Universal I/O port able to take VGA/component video inputs via an optional adaptor, plus a 3.5mm composite video input, a 3.5mm audio output, and USB and MicroSD inputs. No self-respecting pocket projector should now come without Apple support, of course, so the Qumi comes with cabling to support most types of iPod, iPad and iPhone.

Then there’s it’s Office Viewer functionality, via which it can directly open Microsoft Word, PowerPoint, Excel, .txt and Adobe PDF files without needing a computer.

The Qumi ships with a very small but quite pretty remote, via which you can access the projector’s onscreen menus. Unfortunately the projector doesn’t respond particularly sensitively to this remote, and the onscreen menu text is too small to read easily from any sort of distance. But neither problem is truly unbearable.

The menus are sensibly organised when you get close enough to read them, and their options suggest that somebody has really sat down and thought about the sort of things a normal business or casual home user might actually need on a Pico projector. So it is that you get a sensible selection of themed picture preset modes, including, Movie, Presentation and Game settings. Plus you get simple Video, PC, Mac, Chart, and B&W gamma settings. As for colour adjustments, you get just basic colour space and temperature settings.

Some people may take issue with the lack of colour/contrast fine tuning available, but so far as we’re concerned this is a convenient product aimed at a convenience market, so keeping things helpfully simple makes perfect sense.

So far, so good. But things get even better once you actually start to watch the Qumi, as it produces easily the best picture quality we’ve ever seen from a pocket projector.

For instance, its brightness is superb. We were able to stretch the image right up to a good 80in in a dark room and still have a picture with real punch. Or alternatively we managed to run an image of around 60in that was perfectly watchable even with most of our test room lights on. This is, of course, a very handy talent indeed for anyone thinking of using a Qumi in a typical business presentation environment.

For the absolute best results we’d suggest going for an image of around 60in across in a darkened room, at which point you’ve got a brilliant combination of dynamism and genuine size. But really the fact that we’re able to even discuss so much flexibility with the Qumi’s images says all you need to know about its light output versus the vast majority of its dim and drab peers.

What’s even more remarkable about the Qumi Q2’s brightness is that it’s delivered without damaging black level response nearly as much as we would have expected based on previous pocket projector experience. Dark parts of the picture genuinely look quite dark rather than being hidden behind clouds of low-contrast greyness – a fact which contributes further to the picture’s dynamism, and opens up the Qumi as a genuine option for watching films at home if you decide to bring it back from the office for the weekend.

We tried this ourselves, leaving tests with a variety of business and computer sources for a while to indulge in a couple of Blu-ray movies, and the degree to which we enjoyed watching them on the Qumi is unprecedented in the pocket projector category. 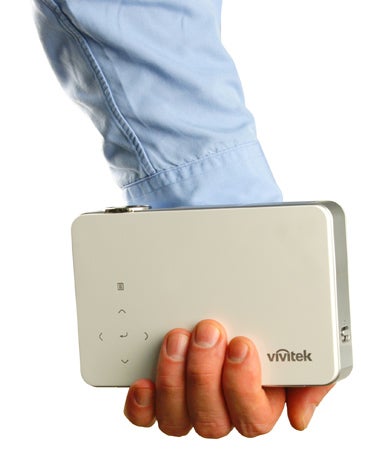 Contributing further to our enjoyment of PC and Blu-ray – and TV, actually – viewing alike is the excellent sharpness of the Qumi’s pictures. HD and WXGA sources look definitively HD on the Qumi rather than the soft, imprecise mess you get with plenty of rival Pico models. In fact, the Qumi’s sharpness is almost as important to the large size of image it can comfortably deliver as its brightness.

Turning finally to the Qumi’s 3D capabilities, it needs to be stressed that we’re talking about the DLP-Link system here. So it will only take in 3D images from DLP-Link sources – essentially PCs equipped with suitable video cards. This isn’t too much of a problem for business users if they fancy doing some 3D presentations, or 3D PC gamers. The only way to connect a 3D Blu-ray player, though, is to use a DLP Link ‘adaptor’ such as Optoma’s 3D-XL, making 3D viewing a tortuous and expensive process that it’s hard to imagine any ‘living room’ users bothering with.

The idea of watching 3D on the vast majority of pocket projectors would be laughable, as their images simply wouldn’t be bright enough to survive the inevitable dimming effects of the 3D glasses. But the impressive brightness of the Qumi really does make 3D viewing surprisingly engaging, certainly if you can live with the image not being much bigger than 50-55in so that brightness levels remain high.

Aside from the remote control/menu size issues noted earlier, the only other negative comments we would raise about the Qumi’s performance would be a) that it sometimes runs very noisily in Normal lamp mode, and b) that its built-in speaker really does sound incredibly puny, leaving you requiring an external sound source for all but the most audio-light of business presentations.

Although we’ve been exceptionally impressed by the Qumi’s features and performance, there’s been a silent elephant sat in the room that we can’t just ignore, much as we’d like to. And that’s the Qumi’s £499 price. This is much higher, of course, than the price of the vast majority of other Pico projectors.

And herein lies Vivitek’s gamble. It’s betting on there being a previously untapped market of people who want the pico projector form factor along with genuinely high quality performance in one package, and will be willing to pay extra for it.

Only time will tell if such a market really exists,. But based on our experience with the Qumi – especially its ability to do quality home as well as office duties – we’re pretty sure it does.