Sadly, hopes that the H5098 might be a serious movie projector selling for ‘casual’ money aren’t backed up by its picture quality. 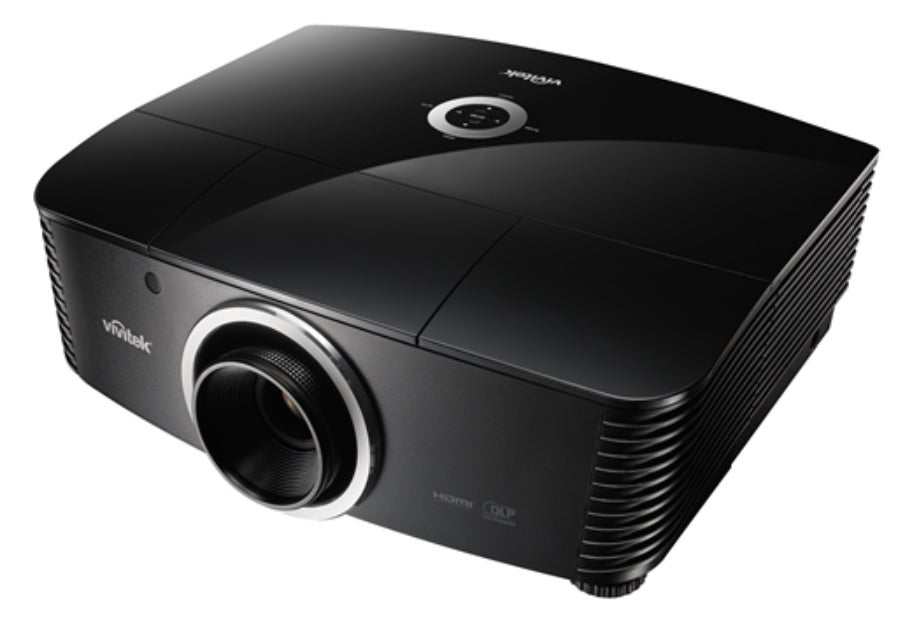 The H5098’s strikingly curvaceous design looks cute, regardless of whether it’s mounted on a coffee table or ceiling. Straight edges and sharp corners are studiously avoided, clearly marking it out as a ‘domestic’ rather than office projector.

While it looks sweet, it isn’t particularly well built. The black bodywork feels noticeably plasticky for a projector that until recently sold for around £2200. Hopefully, this isn’t an external indicator of low-quality innards.

The H5098’s remote control isn’t much of a looker, but it’s actually pretty easy to use. The buttons are large and sensibly laid out, and feature bright backlighting to aid use in dark movie rooms.

The H5098’s compatibility with a range of different lenses makes it more adaptable to different room and screen sizes than any other projector in its class.

Meanwhile, horizontal and vertical image shifting  is provided by two knobs hidden under a flap on the projector’s top.

The H5098 carries gamma and colour temperature presets, as well as a colour management system – which is good news for professional installers. Most typical H5098 buyers are best advised to stick with the Movie and Game presets, however. Just make sure you always use the Dynamic Eco lamp setting to optimise the projector’s contrast. 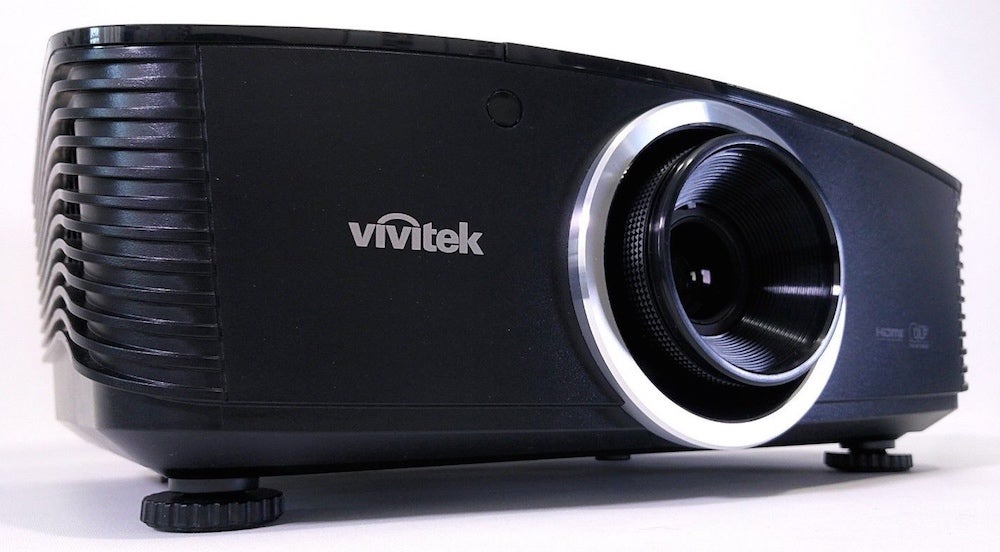 I need to kick off this section by reflecting on a couple of things the H5098 actually doesn’t have. Namely, any sort of 4K resolution playback or any support for high dynamic range; it’s HD and standard dynamic range only.

This is potentially awkward now that 4K projectors – such as the recently reviewed Optoma UHD40 – can be had for as little as £1300. That said, if the H5098 can deliver a superior HD performance, it should still find a market. After all, resolution isn’t the be-all and end-all of projector picture quality.

With this in mind, it’s worth reiterating that the H5098 launched a few months back at around £2200. So you have to hope it has the performance capabilities to make its current £1495 price look good value.

The H5098’s claimed maximum brightness of 2000 lumens is promisingly bright for a non-HDR projector, especially since it’s partnered by an even more promising claimed contrast ratio of 50,000:1.

The H5098’s connections are highlighted by two HDMI ports (one with MHL support) and a PC VGA port. Custom installers will be pleased to find a 12V trigger output, and an RS-232 control port. AV historians, meanwhile, will lap up the H5098’s unexpected composite and component video inputs. Even if they almost certainly won’t actually use them these days.

Unlike most sub-£1500 projectors, the H5098 carries a fairly wide-ranging video-processing system. This includes options for providing more punch to the brightest parts of the image, adjusting skin tones to give them a more natural look, and even introducing frame interpolation to enhance the appearance of motion.

Honestly, I didn’t really find any of these processing tools worth bothering with. So while you’re free to experiment with them, don’t expect them to make an earth-shattering difference. 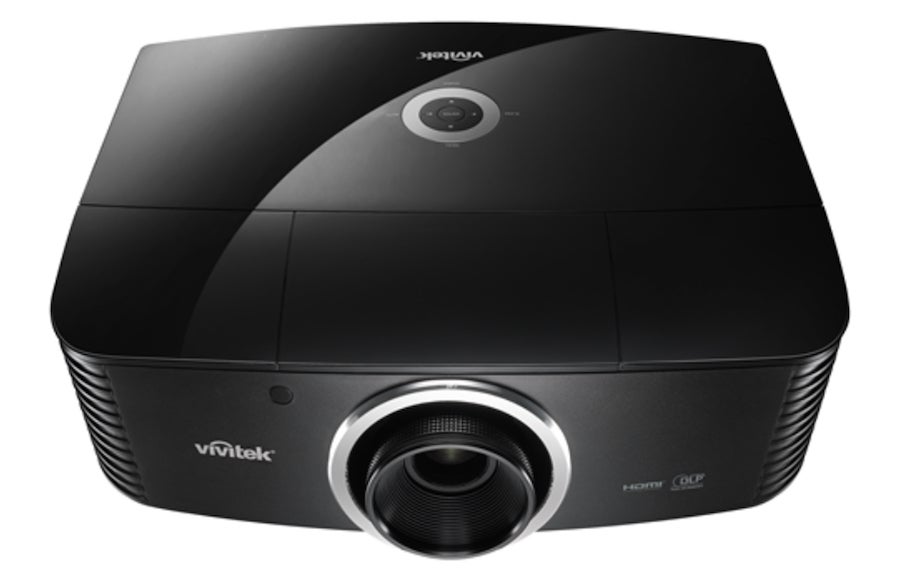 Sadly, the H5098 doesn’t get off to a particularly good start. For instance, it’s apparent that black-level performance is poor. Dark Blu-ray scenes display a pall of grey where you’d hope to see black. There’s some crushing out of shadow detail, leaving numerous dark picture areas looking hollow and artificial.

It turns out that the H5098’s RGBRGB colour wheel can’t stop pictures suffering from noticeable rainbow effect, either. When a bright element appears against a dark backdrop, you can clearly see red, green and blue striping flitting over the bright element.

To be fair, it does take quite extreme contrast content to reveal this rainbowing. Also, some lucky people actually don’t see the rainbow effect at all. If you’re susceptible to seeing it, however, there’s no doubt that when it does show up on the H5098, it can look quite aggressive.

Look past this duo of weaknesses and the Vivitek H5098 has some genuine strengths. Its colour performance is particularly good: tones right across the standard dynamic range palette it supports look rich, gorgeously balanced, and emphatically natural.

As well as being important in itself, this colour prowess helps the H5098 get every last drop of sharpness and detail from its Full HD resolution. This in turn helps pictures enjoy a lovely sense of depth and solidity. Except for when the projector’s black-level shortcomings kick in, that is.

Having praised the H5098’s sharpness, I need to stress that it’s still only an HD level of sharpness. Native 4K projectors, and even the ‘pseudo’ 4K projectors now flooding the DLP marketplace, can look more detailed still. Although this new wave of affordable 4K rivals can’t match the Vivitek’s colour definition.

The H5098 displays a premium touch where motion is concerned. Action scenes and camera pans are handled with real authority, avoiding judder and blurring. Nor is there significant evidence of single-chip DLP’s potential issues with fizzing noise over moving skin tones.

In addition, the H5098 is relatively free from the fizzing noise in dark areas that can be another trait of single-chip DLP projectors. And it can get bright enough to sustain enjoyable viewing even if you can’t fully black out your room.

Its colour finesse, brightness and impressive (by HD standards) sharpness make the Vivitek H5098 a strong-looking gaming display. As with its video playback, however, the good news for gamers is tempered by a couple of problems. First, the lack of shadow detail in dark areas can be a real problem in some games. Second, I measured the time the projector takes to render its images at 100ms – even using its Game preset. This inevitably disadvantages you when playing any games based on reaction speeds.

One last important performance point to touch on is running noise. The H5098’s cooling fans make a bit more of a racket than is ideal. Especially when using the Dynamic Eco lamp setting that delivers the most effective pictures.

To be fair, the fan noise isn’t deal-breakingly loud. The tone of the noise is smooth, too, reducing its distraction potential. Nonetheless, placing the projector away from your seating position is still worth considering when selecting which lens to use. 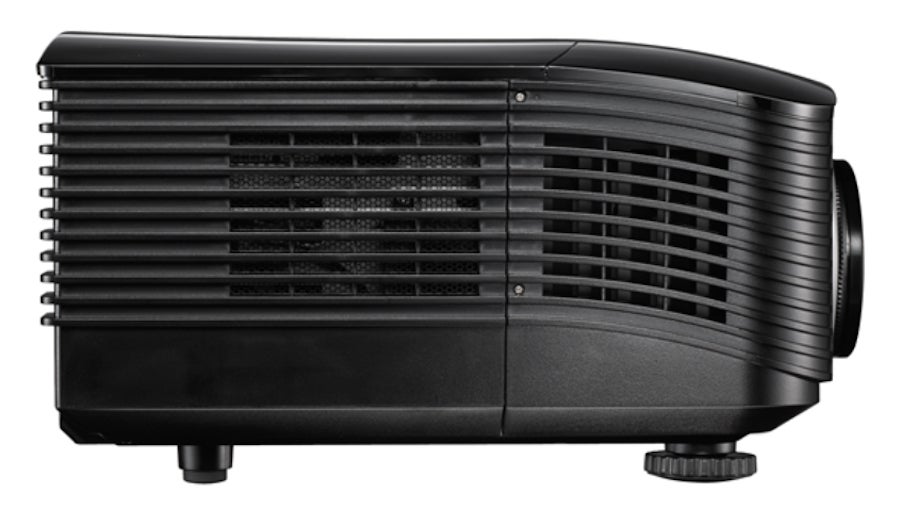 The H5098’s compatibility with a variety of lenses is a great find on such a cheap projector. Vivitek’s premium HD movie machine boasts excellent colour and clarity for its money, too.

Sadly, though, its uninspiring black level performance seriously damages its home cinema credentials. Especially when you can now pick up 4K projectors (albeit with similar contrast limitations) for less than the H5098.

Alternatives to consider would be the recently tested Optoma UHD40 and BenQ W1700 ‘4K’ DLP projectors. Or, if you want to stick with premium HD, the excellent Sony VPL-HW45ES is now available for around £1800.

There remains a place in the market for premium HD projectors – sadly, the H5098 doesn’t quite fit into it.