Vivitek’s attempt to ‘break’ the UK has met with rather mixed fortunes so far. Its ultra high end H9080FD, the first projector we’ve seen to use three LEDs as its light source, blew us away. But the brand’s ultra low-end H1080FD, despite catching our eye with its knock-down £850 price, was rather underwhelming.


To be fair, Vivitek has been tinkering with the H1080 since I saw it, and is promising to send me the tweaked version for a reassessment soon. But in the meantime it’s hoping to prove that it really ”can” do budget as well as high end with the DLP-based H1085 – a step up model from the H1080 that still costs a mere £900.


First impressions of the H1085 are pretty good. It’s a reasonably attractive box, for a start, with its glossy black, boldly angular exterior cutting quite a smart dash on your coffee table or projector mount. Oddly, the black finish makes it look slightly plusher than the white finish found on the H1080FD.

The only catch with the design is the light that the spills from the large grilles down both of its sides. Still, to be fair I personally didn’t find this light spillage noticeable when actually watching a film; it just stands out when you look directly at the projector rather than the film/game it’s projecting.


One side point worth raising here is that the H1080’s design and layout has much in common with BenQ’s recently tested and similarly priced (£999) W1000, reminding us that although there are a startling number of projectors around right now, they all start out from quite a limited number of places. Though as both BenQ and Vivitek would doubtless be quick to point out, surface similarities merely hide the inner differences that each brands’ respective engineers are paid to achieve.


This perspective is given extra weight, in fact, by the way Vivitek has been able to get stuck into the H1080 in order to – hopefully! – deliver a much improved performance by the time we see an updated ‘production line’ sample.


All of this talk is deeply interesting, of course (!), but let’s now get back to the H1085’s specifics – starting with the fact that as with the H1080, it’s superbly well connected for its money. Its two HDMIs, for instance, is in line with projector’s costing 20 times as much, while other highlights include a dedicated D-Sub PC port, an RS-232C control jack for system integration, and even a 12V trigger output for driving external kit – most likely a motorised screen. This latter tool is really unusual to find at the sub-£1k price level.

You may notice from the abstract of the rear panel that the H1085 also has a stereo audio input that feeds a built-in speaker. This feature is also shared by BenQ’s W1000, and although the sound it produces is inevitably puny, I’d still say it’s a worthwhile feature to find on a really cheap, ‘casual use’ projector.


Heading into the H1085’s onscreen menus, meanwhile, also raises a sense of familiarity thanks to their similarity to those of the recently tested BenQ W1000. But this is no bad thing, since aside from the text being a touch small, the presentation and organisation of the projector’s features is pretty tidy.


There are a decent number of tweaks to get your teeth into, as well – provided you don’t stick with any of the picture presets, that is. For if you choose one of these, almost all the other tweaks of note are greyed out.


Most people reading this website will likely prefer to choose one of the three provided ‘User’ picture modes, which can store your personalised settings for different source types. For instance, you might want to use one user-created setting for Blu-ray, one for standard def sources, and one for console games or PC use.

If you really don’t want to get involved in calibrating the H1085 yourself, the Movie mode is definitely the one to stick with for Blu-ray, thanks to its warmer colour palette and richer black levels. Though for console games you might want to go for Normal instead, with its greater dynamism.


Anyway, back to the picture calibration options the H1085 makes available. And one pleasing point right away is that each User mode allows you to select which of Vivitek’s own built-in presets you want to base your calibration on. This can take a bit of the initial legwork out of your efforts.


From here you can, of course, tweak the brightness, contrast, colour, tint and sharpness settings – though actually I’d suggest you treat all of these options with extreme care, as they’re a touch ‘brutal’. The sharpness tool, in particular, is probably best left completely alone (at its 0 default).


More interesting fine tuning includes a passable flesh tone adjustment, a clever but mostly unnecessary noise reduction system, a handy multi-level Gamma adjustment sliding bar, and best of all, an ‘HSG’ Adjustment that lets you adjust the gain, hue and saturation of all six of the primary colours (red, green, blue, yellow, cyan, and magenta) supported by the six-segment colour wheel.

So extensive are the H1085’s adjustments, in fact, that apparently it can be calibrated by an Imaging Science Foundation (ISF) engineer – a major feature boost over the H1080. However, at the time of writing I was unable to access the ISF setting, and couldn’t find anyone not already off for Christmas at Vivitek who could help me out. Maybe it’s in a service menu or something?


The only other really handy things are the facility to knock all overscan off the picture – essential in getting the best from HD sources – and an auto keystone adjustment, which does a surprisingly nifty job of automatically calculating the level of digital image manipulation required to compensate for the likelihood of your projector being positioned somewhat below or above the centre of your screen.


And when we say likelihood, we mean it. For sadly – if completely expectedly for its money – the H1085 doesn’t sport any optical image shifting, leaving many people with keystone correction as the only way of getting the edges of their picture perpendicular. 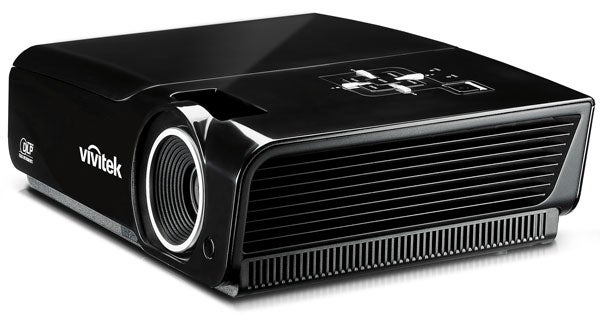 Since keystone correction is essentially a distortion of the picture, obviously I’d recommend that you try and minimise the amount of it you have to use by getting the projector as close as possible to the optimum height in relation to your screen. But at least the keystone correction algorithms Vivitek is employing seem pretty solid as such things go.


The H1085’s level of optical zoom is a touch limited too, but again this is hardly unusual in the budget projector world. In fact, the H1085 is far from the worst offender we’ve come across in this respect.


The final thing I should do before assessing the H1085’s performance is look for other differences (beyond the already quoted if unproven ISF support) between the H1085 and the slightly cheaper H1080. Particularly important could be the fact that the colour wheel is a 3x affair, rather than the 2x spinner found in the H1080 I reviewed (though I gather the revamped H1080 also has a 3x colour wheel). This has the potential to greatly reduce the rainbow effect that troubled us so much on the H1080. Fingers crossed.


Other improvements find the maximum brightness upped to 2,000 Lumens from the H1080’s 1,600, and contrast upped to 5,000:1 from 4,000:1 – both potentially key components in a more satisfying image, provided the higher brightness and contrast can be made to work with rather than against each other.

One thing becomes apparent with the H1085’s pictures right away, and that’s that they suffer way less with the rainbow effect than those of the H1080 I tested.


My favourite test sequence for spotting ‘rainbowing’ is, as regular readers will know, the opening black and white sequence from ”Casino Royale”. (Although any number of text-heavy game menu screens, like the player lists in the pre-game lobbies of ”Modern Warfare 2” online, also work well.)


And with the H1085 I found myself substantially less affected by the familiar stripes of pure red, green and blue flitting around over the bright parts of the picture than I’d expected to. The issue certainly isn’t completely invisible; flitting my eyes over the screen definitely reveals it. But crucially it’s now low-level enough to seldom be a real distraction to the majority of people.


As always, I should say that some people are more susceptible to the rainbow effect than others, so there may still be a few folk who can’t live with the H1085’s level of the problem, and should consider an LCD model like Epson’s impressive TW2900 instead. But I really don’t think this situation will apply to many people.

The H1085 also greatly outguns the H1080 with its black level response, as dark scenes suffer less with the slightly grey, crushed, detail-light look noted with the cheaper model. What’s more, as hoped the H1085’s greater brightness works in harmony with the enhanced contrast range to make images during dark and bright scenes alike look more punchy and engaging, even after calibration.


The H1085’s post-calibration colour palette looks more consistently accurate than that of the H1080 too, while detailing and sharpness are at least as acute. In fact, the extra ‘snap’ to the picture created by the boosted brightness and contrast performance arguably makes the H1085’s HD pictures look slightly crisper.


Aside from the residual rainbow effect mentioned earlier, the only other real problems I have with the H1085 are that it runs rather noisily if you make the mistake of leaving the lamp in its Boost mode; that there’s noticeable (though not unbearable) judder during 1080p/24 viewing; and that dark parts of the picture are slightly ‘alive’ with the greyish green dot crawl that’s still common with DLP projectors. Oddly, though, while this must certainly impact black level response to some extent, you only really become conscious of its existence if you get really close to your screen, or when a scene contains a lot of low-level green colouring.


These really are exciting times to be buying a budget projector. For as with a number of rival models we’ve seen recently, while the H1085 certainly doesn’t entirely shake off the inevitable shackles of its low price, it’s still astonishingly watchable and ambitious for its money. In fact, for me the way it manages to deliver brightness and contrast while still reining in DLP’s rainbow effect actually makes it the pick of the current sub-£1k projector crop.