If there’s one thing we can’t get enough of at TrustedReviews, it’s products that make our minds boggle. Kit that apparently defes the established laws of physics. And it’s fair to say that Vivitek’s D795WT projector fits squarely into this ‘brain bender’ category. Even though in one sense what it does is actually quite simple…

The D795WT’s trick is that it gives you colossal images from absurdly small throw distances. As in, you can get a 90in image from it even when it’s sat less than a foot and a half away from your screen or wall. Getting similar sized images out of normal projectors would need you to sit them anywhere between 3 and 10m away, depending on their lens configurations.

The advantages of the D795WT’s extraordinarily short throw distance are obvious. First, they don’t have to be accommodated right in the middle of the room like many normal projectors. Also, they mean you no longer have to worry about getting special long cables for connecting the projector to your source kit – or moving your source kit into the middle of your room next to the projector. 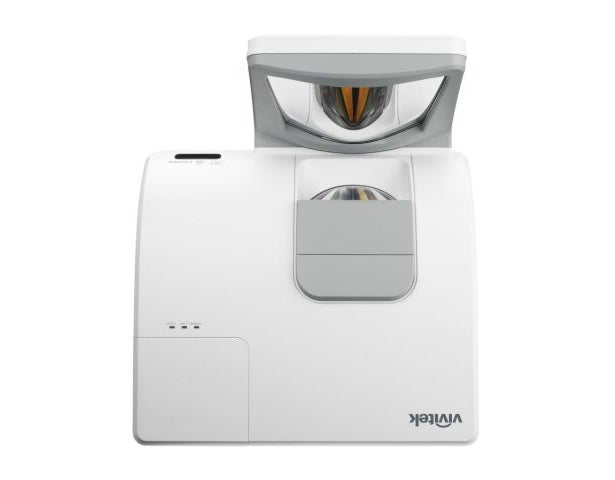 Minimising throw distance also reduces the potential for ambient light to reduce the image’s brightness. And finally the presence of the projector right next to the image helps if you’re having to use the projector’s built-in speakers, since it means the sound appears to be connected to the picture, rather than some spot three feet behind and above you.

How does the D795WT deliver its amazing image size/throw distance ratio? Mirrors. In particular, right in front of the lens sits a large, convex and aspheric mirror that bounces the image emerging from the projector’s optics back over the projector’s top and onto your screen or wall.

Simple though this procedure sounds on paper, though, it’s traditionally proved very difficult to ally such mirror dispersal technology with really high or flexible image quality. Partly because of geometry issues associated with the mirror system, but mostly because the projector engines at the heart of ultra-short throw projectors tend to be based on LCD tech optimised specifically for business presentations with no thought to catering for a potentially wider market.

The D795WT, though, uses DLP technology, immediately raising greater hopes that it might be a genuine ‘crossover’ short-throw model with as much domestic as business potential. 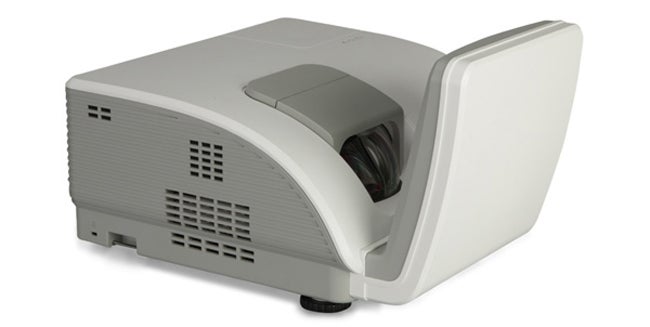 This potential dual appeal isn’t done any harm, either, by the fact that the D795WT is 3D-Ready (via DP Link system), or by its eye-catching price. We’ve seen it going for only a few quid over a grand, which really doesn’t seem bad at all for what’s on offer. Provided, at least, that the projector manages to deliver some quality to go with its convenience.

The need for a mirror directly in front of the lens does make the D795WT rather an odd-looking beast, especially as the chunky mirror sits so dramatically at odds with the sultry curves of the main bodywork. But the glossy white finish helps, and the mirror appendage at least feels robust.

The D795WT’s apparent home as well as office ambitions continue with its connections, which include an HD video-capable HDMI, two VGA PC inputs, a VGA output, an RS-232 port for external control, an RJ-45 port for network connection, composite and S-Video inputs, and a USB port for the direct connection of computers.

The first sign of trouble with the D795WT comes as you try to set it up. Getting the picture to simply appear is easy enough, but getting it to appear with all of its edges straight and at the right size for our test room screen is a totally different matter. We played around with the projector’s position, keystone correction tools and digital zoom settings for a good half hour before we got something we were really happy with. And even then there was a slight downward slope to the picture’s upper left corner.

A degree of distortion is probably inevitable given how ‘hard’ the mirror is having to work to spread the image so far, but that doesn’t alter the fact that it’s slightly distracting not to have pictures looking perfectly rectangular.

While it might take effort to get the D795WT working, though, the results don’t diminish in the slightest from its image size achievements. In fact, having set the projector to its widescreen mode, we had to actually push the projector so close to our (heavily bordered) 85in projection screen that it was touching its frame and use the digital image reduction tool before we could see all of the D795WT’s picture. Amazing.

In reading the D795WT’s specs, we’d been a bit alarmed to note that its claimed 3000 Lumens of brightness was actually a higher figure than its claimed 2500:1 contrast ratio. This type of brightness/contrast balance usually points to a projector that’s focussed almost exclusively on delivering business presentations in bright boardroom environments, and which won’t look at all convincing with video or gaming applications. Thankfully, though, the D795WT proves an exception to the rule, with its various presets adjusting pictures so effectively and extensively that its multi-purpose credentials remain intact. 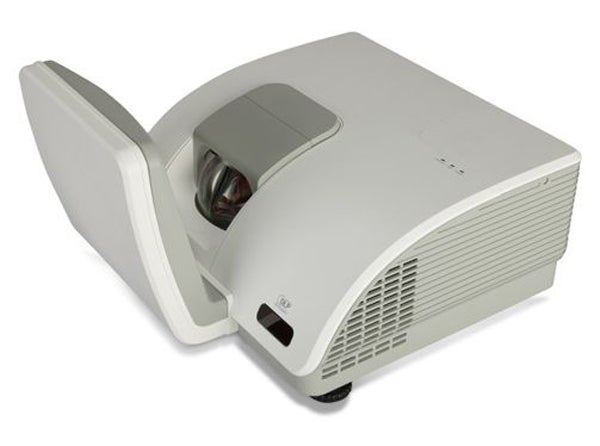 If you actually do just want to use it for a presentation, then the Presentation mode powers up the brightness dramatically and pushes colours out with the sort of tone and intensity that suits PC use. But crucially, if you opt for the Movie preset, the image does a total U-turn, pushing contrast ahead of brightness to deliver a surprisingly convincing black level response and, most unexpected of all, a colour palette that actually looks video-like. There’s a touch more blue in the image than we’d ideally like, but we wouldn’t consider this in any way a deal breaker on a projector with a focus on practicality like the D795WT.

Also surprising is how sharp and detailed the D795WT’s video pictures look with HD sources. For despite the potential for distortions caused by the aspherical mirror, the picture looks emphatically HD for the most part – at least on a par with budget ‘normal’ projectors.

Pictures in movie mode still look punchy and bright despite the effort put into emphasising contrast, and noise levels aren’t bad at all. There’s a little fizziness, but nothing you wouldn’t expect to see on any affordable DLP projector, and DLP’s rainbow effect only crops up on very rare occasions – basically where there’s a small, very bright object appearing against a black backdrop. In other words, neither issue is remotely serious.

Other strengths include some clean, natural motion reproduction, and a cannier touch with shadow detail reproduction than expected.

Switching to the D795WT’s game mode pushes colour saturations higher and makes the tone cooler, as you’d expect. What’s more, the projector’s short-throw design proves particularly handy when playing a Nintendo Wii, for it means you can leap about like nutters in front of the screen without having to worry about a) getting in the way of the projector beam or b) knocking a normally positioned projector over!

Selecting the Presentation mode, meanwhile, as noted before, does wonders for the appearance of PC presentations by shifting the colour tone, slightly improving sharpness, and sacrificing black level in favour of boosting brightness considerably.

The D795WT’s short-throw technology does cause a few problems, though – problems which tend to be emphasised when in PC mode. For starters, while most of the image looks unexpectedly crisp and sharp, the edges look slightly softer. There’s also a little horizontal line structure in the picture if you’re watching up close, but this reduces to the point of being pretty insignificant from what we’d consider a typical viewing distance.

Finally, there’s a very slight brightness ‘hotspot’ around a foot or so wide in the centre of the bottom edge caused, so it seems, by some light from the mirror reflecting onto the projector’s glossy white bodywork. This might mean Vivitek would be better using a black or at least matt finish on future short-throw products.

Finishing up with a brief word on the D795WT’s sound, it’s predictably hardly the stuff of home cinema dreams. But on the other hand it is louder, cleaner and less distorted than that heard from most projectors, and is actually entirely acceptable as an accompaniment to a casual gaming/movie session or an office presentation.

Verdict
It’s not often that ultra-convenient technology manages to go hand in hand with good performance standards, but Vivitek’s D795WT is a rare exception. Its slight sharpness uniformity issues and potential for slightly curved or sloped image edges will doubtless be a compromise too far for serious film or gaming fans, but for a product designed first and foremost to fulfill a practical requirement, the D795WT’s performance is actually much better than expected.