What is the Vive Wireless Adapter?

One of the biggest bugbears of the HTC Vive virtual reality headset? Wires. There’s nothing more immersion-shattering than tripping on a cable in a middle of a shootout or halfway up your Mount Everest ascent. Fortunately, Vive now has an accessory that looks to eradicate that issue: the Vive Wireless Adapter.

Once you’ve installed the wireless adapter onto the top of your Vive headset, you’ll no longer need to be plugged directly into your computer like something out of The Matrix.

While the TPCast HTC Vive Wireless VR Adapter has been offering this wireless haven for a decent while now, the official Vive adapter promises better performance and support for the Vive Pro – although you’ll need to invest in an extra adapter, which isn’t cheap.

There’s no doubt that the Vive Wireless Adapter improves the experience of virtual reality then, but it isn’t without its niggles. And with prices starting from £299, it isn’t cheap either.

I’m not going to lie, the Vive Wireless Adapter looks a little odd. With the adapter installed and the headset strapped to your face, you end up looking like some sort of alien Teletubby. That said, looking daft while wearing a VR headset is by no means a new thing.

But while I can tolerate looking like a prat, I’m less impressed with the impracticality of the design. I like to use over-ear headphones with the Vive, but with the wireless adapter jutting out, it becomes virtually impossible to put on some headphones without feeling like you’re playing Jenga on top of your head. As such, you’re essentially restricted to wired in-ear buds for audio.

This is only an issue for the vanilla Vive, mind. The Vive Pro’s built-in headphones mean you needn’t worry about balancing an extra pair of cans on your noggin. 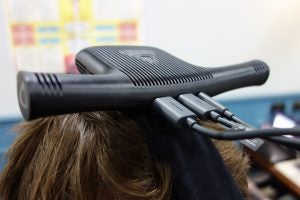 The Vive Wireless Adapter has a weird design, which makes it awkward for wearing headphones

Another thing that’s a little bit awkward is the battery pack. While the bundled holder allows you to just clip it to your belt, or slip it into your back pocket, the long dangling wire that connects it to the headset can become annoying when you’re waving your arms around mid-game. Of course, it’s still a much better alternative to the standard wired option, but still.

Thankfully, the the adapter doesn’t weigh much at 129g. It’s easy to forget that it’s sitting on your head. And thanks to the straps that secure it to the headset, there’s no need to worry about it flying off after a few vigorous head shakes.

The Vive Wireless Adapter isn’t a plug-and-play accessory. As is the case with the Vive headset itself, initial setup demands a fair bit of fiddling and it’s pretty fussy with regards to the hardware with which it will work.

For starters, you need to install a PCIe WiGig card in your computer. This not only immediately rules out laptops, but it’s also a little daunting for those who aren’t fluent in computer geekery. 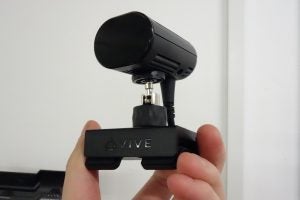 That said, it isn’t a complicated process, and Vive’s online instructions are as clear as anything you’d find in an IKEA manual. You simply slot the WiGig card into a PCIe slot on your motherboard and then plug your wireless box into that.

Then, you simply secure the adapter to the top of your Vive headset, plug in the relevant cables (HDMI, USB and power connector) and then download the Vive Wireless app. Once it’s set up, just switch on the adapter and fit the headset over your head to start playing.

Note: we used the same computer to test the Vive Wireless adapter as we did the Intel Core i9-9900K and Nvidia RTX 2080 graphics card. Here are Vive’s official minimum requirements for the Vive Wireless Adapter:

The Vive Wireless Adapter performed flawlessly. I spent hours playing the likes of The Lab, Super Hot VR and Fruit Ninja, and never once experienced so much as a hiccup.

Being detached from the computer was liberating. I could move, jump, duck and dive without feeling a tug on my head. Having to no longer step over a cable when moving around the room helped significantly in terms of immersion. In all honesty, I think I’ll struggle to return to the standard setup after having experienced such freedom. This is probably the most game-changing VR feature since the Oculus Rift’s Touch Controllers, and is clearly the way forward for future VR headsets. 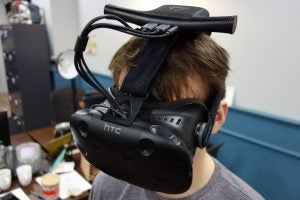 I didn’t notice any lag during my experience with the adapter, which is important considering even the slightest delay can be a sure-fire way of bringing on vomit-inducing headaches. This is thanks to Intel’s WiGig technology, which promises a premium VR wireless experience that operates in the interference-free 60GHz band. This means lower latency and better performance.

The Vive Wireless Adapter supports a play area of up to 20ft x 20ft. That’s superior to the TPCast’s rival Wireless Adapter that can only serve 16ft x 16ft. Well, I say “only”, but that’s still perfectly fine for most UK living rooms – unless you live in Buckingham Palace.

If I’ve got any gripes in terms of performance, it’s that the Wireless Adapter can get a little hot. This doesn’t make the experience uncomfortable, though; it’s far enough from your face that you’re unlikely to be affected. You have to literally reach up and touch the adapter to realise it’s getting toasty, so to call it a flaw really is nitpicking. 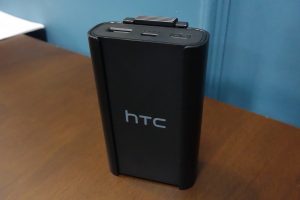 The battery pack can be charged via a USB-C cable

Vive claims that the Wireless Adapter’s battery life is up to two and a half hours, and we matched that figure almost exactly during testing. It sounds short on paper, but that’s impressive length considering it’s streaming video to the headset. Plus, few would really want to spend that much time in a virtual world without a break. Although the TPCast Wireless Adapter does claim a significantly superior 5-hour battery life for comparison.

The Vive Wireless Adapter battery pack can detach from the headset and uses USB-C to charge up. A charger is bundled in the box; but it’s still really handy having a common charging port as you’re bound to have plenty of compatible cables sitting around your home. It does take a lengthy time to charge the power bank to full capacity, however. A couple of hours left on charge didn’t even fill the tank halfway.

Why buy the Vive Wireless Adapter?

If you already have a Vive or a Vive Pro headset, the Wireless Adapter offers a huge step up for immersive experiences. It’s hard to fault in terms of performance.

The problem is, it’s expensive. Incredibly expensive. With the base model costing £299, it’s even more pricey than a PlayStation VR headset. Personally, I wouldn’t pay that much for the adapter. There’s no doubt that it improves the experience considerably, but it certainly isn’t an essential accessory. This is very much a luxury item for those who aren’t worried about throwing around their cash.

It’s also frustrating that it won’t work with laptops. Given that more and more gaming laptops are being released with VR compatibility, it’s a bit of a head-scratcher that Vive hasn’t looked for an alternative solution to include both markets – especially since the third-party TPCast HTC Vive Wireless VR Adapter successfully uses a bundled router for wireless transmissions instead.

At the very least, the Vive Wireless Adapter is a fantastic first look at an exciting new feature that will almost certainly be incorporated into future VR headsets. But for now, you’re going to have to pay a proper premium to take the Vive’s immersion to the next level.