The Vive Cosmos Elite is a capable VR headset, but it doesn't do enough to justify its premium £900 price. The impressive room-scaling, motion-tracking and high screen resolution combine to ensure this headset offers one of the best VR experiences yet, but its laborious setup, wired limitations and fussy space requirements are so frustrating that it takes a lot of willpower to even start playing. The Cosmos Elite may appeal to developers and hardcore gamers, but most people will prefer the convenience of the Oculus Quest.

The Vive Cosmos Elite is HTC’s latest premier virtual-reality headset. It aims to offer buyers the best specs ever seen in a VR headset, and is being marketed as the ultimate, no-compromise option for hard-core gamers.

By all accounts it’s a very capable headset that’s more than good enough for gamers and developers alike. But costing more than twice as much as its closest rival, the Oculus Rift S, it loses its shine somewhat, even in the top-end PC gaming market it’s targeting.

Add to this a cumbersome setup process, and it means it’s the cable-free Oculus Quest that remains Trusted Reviews recommended VR headset for most people.

The Vive Cosmos Elite looks pretty much like every other PC VR headset from HTC. It comes with a cabled main headset that sports the same cyber-punk look as the regular Cosmos, alongside two base stations and wand controllers.

The only difference between it and the regular Cosmos is that it comes with, on paper, improved tracking thanks to a nifty preinstalled faceplate and sensor setup. The plate, according to HTC, offers inside-out tracking and improved room-scaling accuracy when paired with the included base stations.

Elsewhere, the design changes are more subtle and include basic upgrades. These include reworked earphones that, according to HTC, have been tweaked to offer better audio, “on-form-fitting” ergonomics, and upgraded higher resolution 2880 x 1700 lenses. The latter form the headset’s key selling point, beating the Rift S’s 2560×1440 resolution.

Upped resolution and improved audio and tracking are impressive, but for a headset that’s twice the price of its nearest rival, the lack of obvious changes is disappointing. The base stations here are identical to those accompanying the previous-gen Vive, as are the controllers. 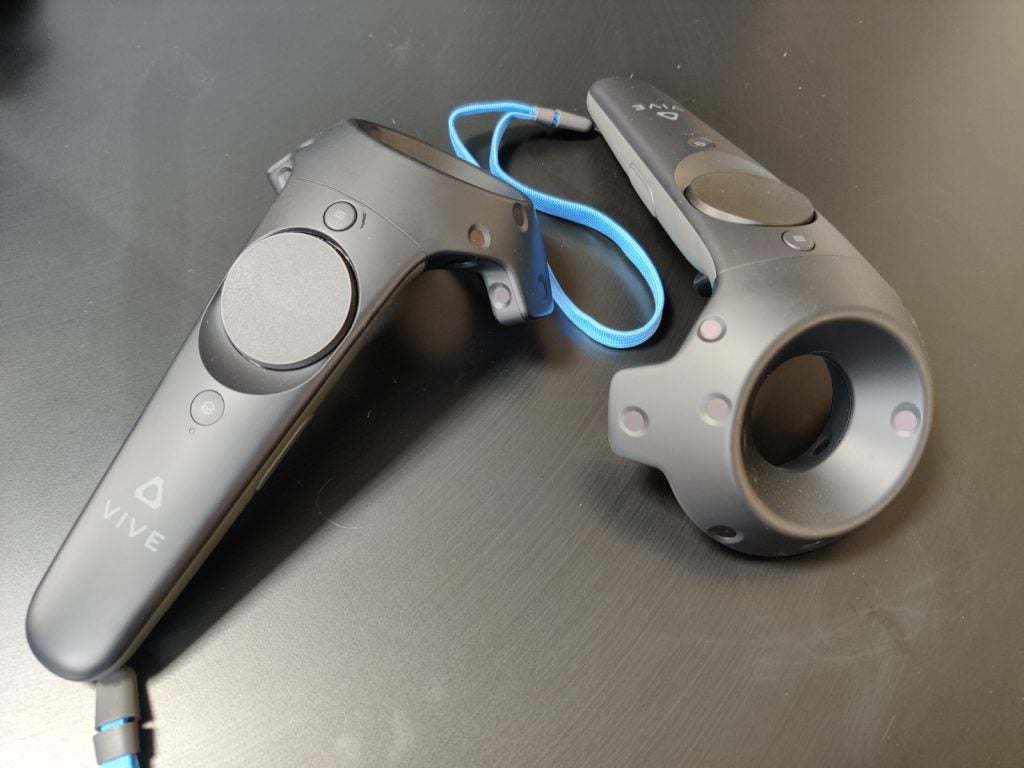 Here at Trusted Towers, we’ve never been completely sold on the Vive’s wand controllers. They certainly provided the first-gen Vive with a clear edge over the Oculus, which only worked with Xbox controllers at launch. But since the release of the Oculus Touch, the Vive wands have felt fairly clunky.

The button configuration is intuitive, but they’re heavier and chunkier than the Touch. This, alongside an elongated design, makes them feel less comfortable and immersive than their Oculus rivals.

In addition, I remain to be sold on the controllers’ grip buttons and touch pad inputs. The grip controls work okay, requiring you to squeeze the wands when you want to grip something in VR, for example. But their actuation point and placement can make them difficult to use for people with small hands.

By comparison, the Oculus Touch’s trigger-grip button is much easier and intuitive to use. The touch pads that sit on the controllers’ front work fine – but, again, aren’t as easy to reach or use as the console-like joysticks deployed on the Touch.

The standard Vive Cosmos saw a fantastic controller upgrade, closely imitating the Oculus Touch. Bizarrely, the Vive Cosmos Elite does not come bundled with those more advanced controllers, instead opting for the original wands which is a very bizarre move from HTC.

The fact Vive hasn’t managed to streamline the Cosmos Elite’s setup process is also a little disappointing. For starters, before you even begin, you’ll need a fairly powerful gaming PC. You can see the Vive Cosmos Elite’s minimum specs below.

Next, you need to plug the headset into the included adapter, connect it to the power socket and attach it to your PC through USB 3.0 and DisplayPort inputs.

Following this you need to download the Vive setup software and follow a series of on-screen instructions. This tasks you to place the base stations on opposite sides of the play area at heights of roughly 2m and then map out your play area using the wands.

The software’s step-by-step guide is helpful, but the process remains a faff nonetheless. The base stations still need to be powered into a mains socket and placed at least 5m apart. In most living areas this means you’ll end up having to physically screw them into the wall using one of the supplied fittings.

In addition, the system requires a fair amount of space if you want to take advantage of the headset’s advanced room scaling capabilities. Specifically, a minimum 6 x 6ft of floor space – which is more generous than the size of most living rooms in London. 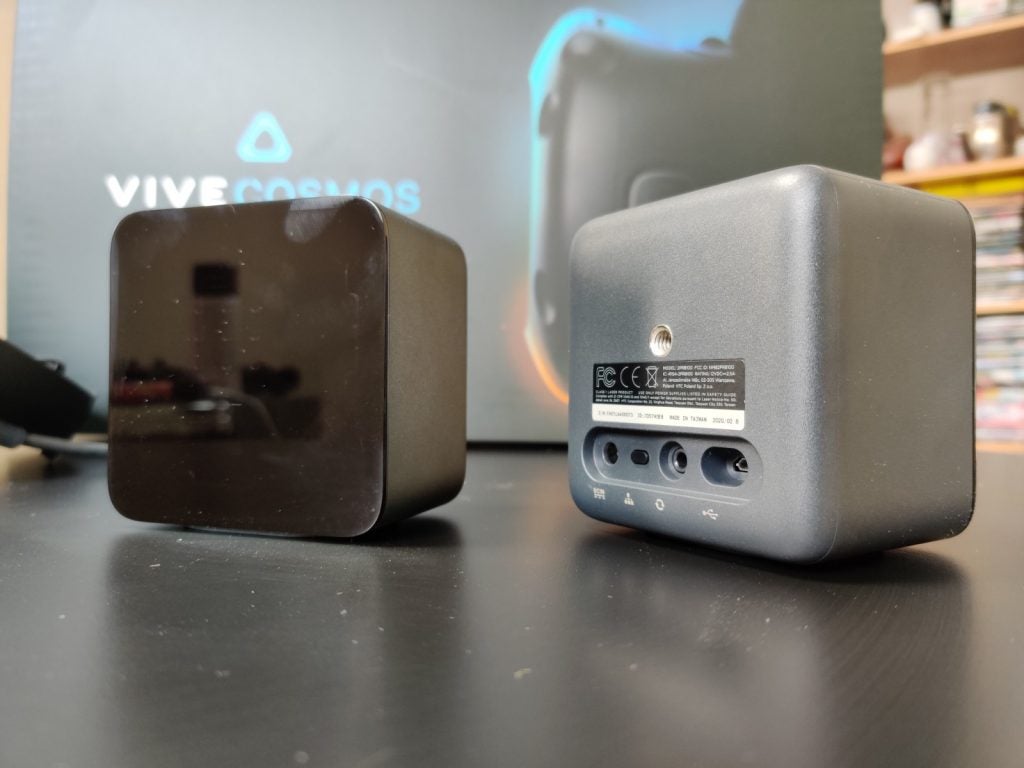 Apps and games – Overlap of two stores causes some frustration

Once all the above is achieved, the system will log you into Viveport, to which HTC is offering six months “Infinite” free access, alongside a copy of Half-Life: Alyx, with every Vive Cosmos Elite. Viveport Infinite is a subscription service similar to Microsoft Game Pass. It grants you exclusive access – and discounts – to a free library of content on a subscription basis.

The software is fairly intuitive, following the same approach as Microsoft Mixed Reality, featuring a VR room with menu screens on the walls. The selection doesn’t match Oculus’s offering, but many of the main games are present – outside of a select few exclusives such as Robo Recall, which remains one of the best VR arcade shooters around.

Matters only become more confusing when you attempt to calibrate the playzone or switch to a game in Steam VR. Bizarrely, the playzone setup and calibration for the wands is still handled by Steam VR. As such, you’ll be jumping between the two. The same is true if you want to access a game that you purchased on Steam rather than Viveport.

This is annoying, since there’s huge overlap between the two stores. If a title is available on Viveport, you’ll often find it cheaper on Steam. This means if you don’t have a subscription then Viveport feels like a bit of a pointless addition.

I’m also not sold on the base station and controller firmware update process – not that you’ll have to do this often, but when you do the process is laborious, tasking you to plug each part into the PC using the included micro-USB cables and manually update them via Steam VR, rather than Viveport.

Through testing I found the software was also fairly prone to crashes, requiring the process to be run several times before finally working. 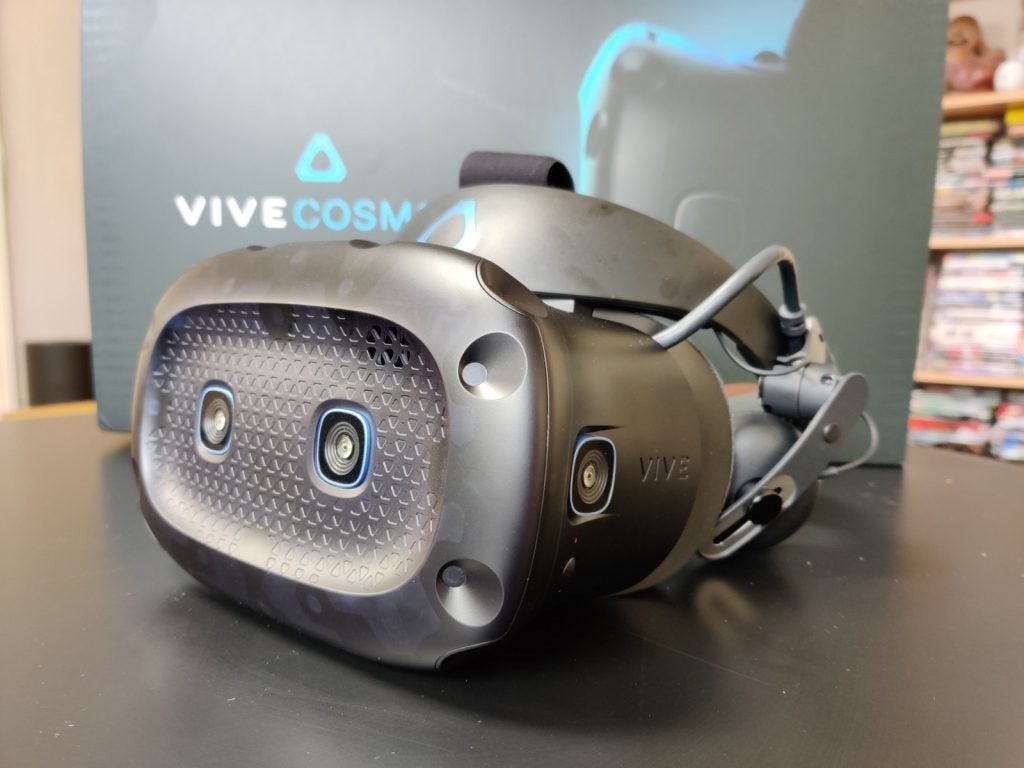 Thankfully, once you get things working the Vive Cosmo Elite is a very capable VR headset. The increased resolution works wonders to remove the screen-door effect – where the lines between pixels are visibly noticeable – that plagued early VR headsets. It ensures that once the headset is on comfortably and you’ve adjusted the focus, every detail of VR games looks razor-sharp.

The only time you’ll experience any issues is when you come out of VR. The headset comes with a hinge design that lets you pop up its front part if you just need to quickly get your bearings while playing. It’s a great feature, but I found myself having to regularly refocus the headset every time I used it.

The use of the original base stations also means that, unlike the regular Cosmos that takes a page out of the Windows Mixed Reality playbook and relies purely on the headset’s own camera and sensors, the Elite’s hand-tracking is for the most part excellent.

Playing Half-Life: Alyx, I never suffered any serious hand-tracking issues and generally enjoyed a wonderfully immersive VR experience. The same was true when painting in VR and country-hopping in Google Earth.

The setup process is fairly laborious, but if you have enough space then room-scaling works a treat; the Vive accurately picked up my movements in my VR play area. This isn’t true of most entry-level VR headsets.

Despite all of that, the elephant in the room is that a cabled VR connection is going to impact the level of immersion. Although the supplied 16ft cable is long enough to avoid dog-on-lead accidents, it’s heavy weight means you’ll constantly be aware of its presence, and feel it rubbing on your neck. As happened with the first-generation Oculus, I still managed to garrotte myself playing Arizona Sunrise trying to dodge a zombie – the mother-fudger came out of nowhere. 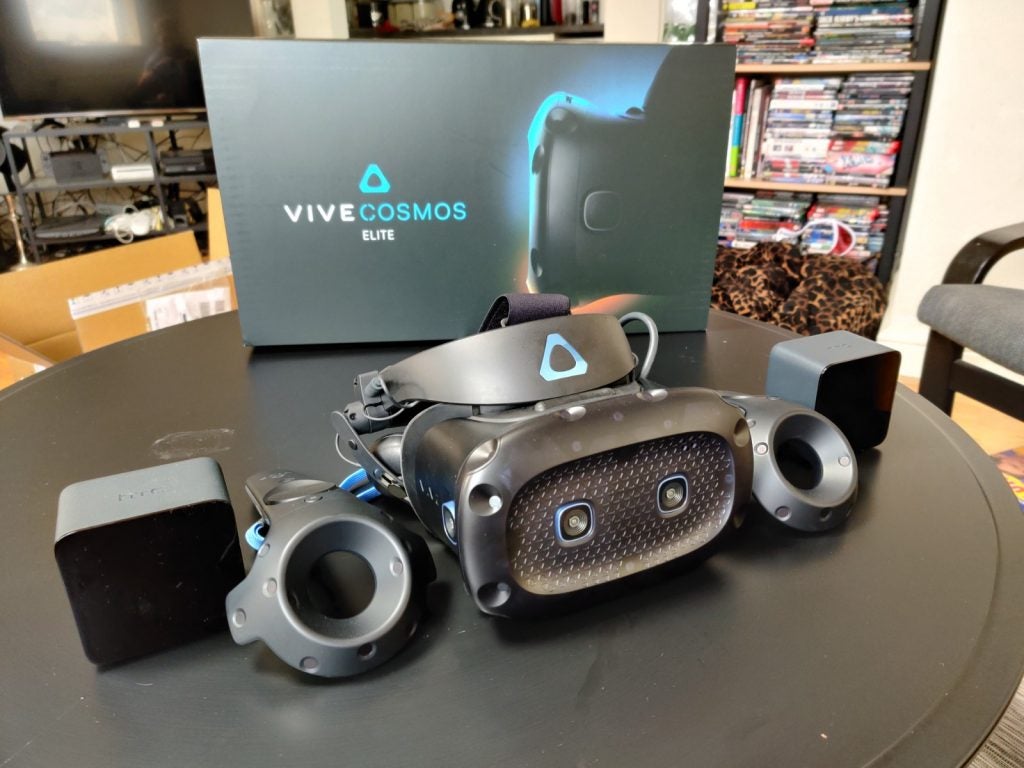 You should buy the Vive Cosmos Elite if…

You shouldn’t buy the Vive Cosmos Elite if…