Trying to upset the established browser pecking order is tough. Microsoft has had almost a year to push its baked-in Windows 10 Edge browser, but has thus far failed to capture more than a small percentage of the market.

Vivaldi, then, has its work cut out. It’s a web browser powered by the Blink engine, which is the same core used in Google Chrome and open-source, Chromium-based browsers. This is important, as it means there’s no need to mess around trying to get websites to work with Vivaldi. But the rendering engine is the least interesting part of the browser; it’s the tiny percentage of the screen that sits around every webpage that makes Vivaldi truly brilliant.

Think of Vivaldi as a Chrome web browser that’s already loaded with extensions, but ones that you actually want to use. I’ve been using Vivaldi for a month since it was released as a complete piece of software, but regular updates mean that it will likely change and improve in the months that follow.

This is a browser for tinkerers, and those not satisfied with the limited experiences you’ll find on any other unmodified web browser. The Settings menu contains more buttons than you’d find on any browser, and while to many it will be complete overkill, the sheer volume of configurable options means there’s very little recourse for someone who complains that things aren’t set up as they like.

If you’re an Opera user, you’ll already be familiar with some of the in-depth functionality available and, in truth, Vivaldi does feel like Opera with a new engine and some extra features. But to me this is no bad thing. 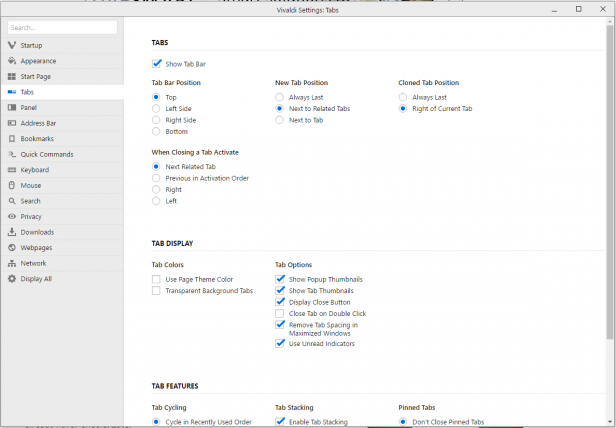 One excellent example of the extent to which items are configurable is having the ability to change the way tabs are laid out when Vivaldi is maximised: either snug at the top of the screen or with a gap of a few pixels, so you can easily grab the status bar. The wealth of customisation options show this software is concerned about the user experience.

Like Opera, there are gesture-based shortcuts that enable you to hold down the right-mouse button or the Alt key, and move your cursor to perform a dozen basic tasks including Back, New Tab and Stop. I found it difficult to incorporate these into my daily workflow, and they don’t work particularly well with a touchpad; it’s disconcerting to perform a touchpad gesture and still see the cursor move, even though you don’t want it to.

There are “rocker gestures’ too – also in Opera – that let you hold down one mouse button after the other to perform back and forward commands. Hold right, click left, let go of right and you’ll go back; do the opposite and you’ll go forward. It’s super-efficient.

There are dozens more keyboard shortcuts that you can assign to all manner of more advanced functions, including Vivaldi-specific actions. To begin with it can be a touch overwhelming; Vivaldi could really do with a “tip of the day” feature that slowly introduces you to its advanced features.

It all begins from the Speed Dial start screen – another hark back to Opera. It’s a handy way to organise your most frequently visited pages, plus it can be customised with colours and backgrounds, but it isn’t a game changer.

The real meat of Vivaldi comes from its arsenal of productivity features. By far the best is the ability to stack tabs on top of one another. This is achieved by dragging one tab to another, at which point Vivaldi will combine them,. You can cycle between them by clicking on a slither of a button at the top of the tab. 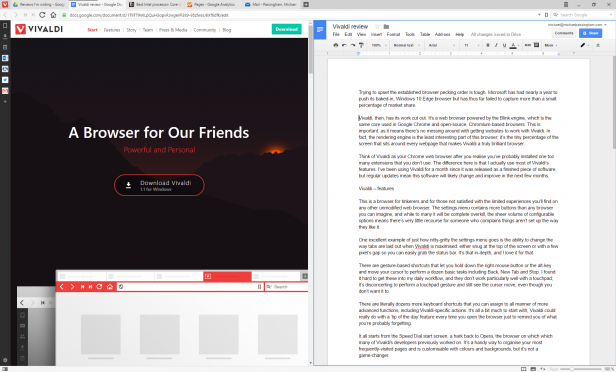 You can also automatically combine tabs from one domain into a single stack, so you don’t end up with tens of Airbnb or TripAdvisor tabs open while you’re researching your next holiday, for example. It works in a similar way to Windows 10’s taskbar; you can hover your cursor over the stack and get a preview of the tabs currently in that stack, and then click on the tab you want.

Even better, you can tile the tabs so that they sit alongside each other. So if you’re working with reference material and typing into a Google Doc, for example, you can just place them both side by side within Vivaldi, without having to create a new window for your research material.

It can be fiddly and it isn’t perfect; the biggest irritation is that there will be only one address bar between both pages, so you have to select the right page before attempting to navigate away.

Cooler still is the addition of a side bar, which lets you pop out web pages – called Web Panels – whenever you fancy. This is handy for webmail clients such as Gmail, news websites such as the Guardian and Twitter, or any other website that’s responsive to the size of the browser being used. 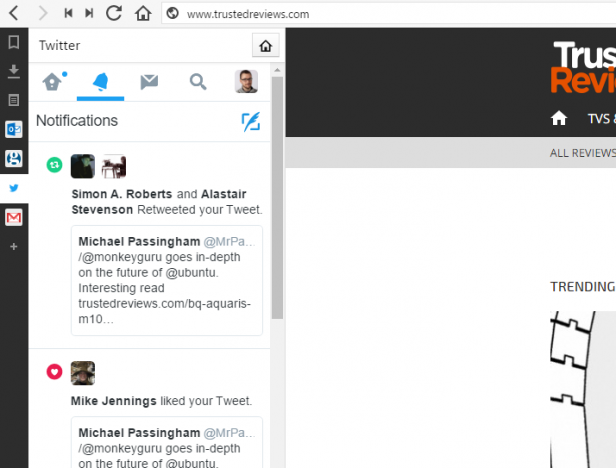 Web Panels are great for quickly checking emails and news

Gmail, for example, opens as a mobile version, making it easy to quickly run through emails before switching to a your full Outlook tab. It would be nice if these sidebar tabs would pop out into full tabs when you double-clicked them, but that’s perhaps a feature for the future.

Also in this sidebar you’ll find a note-taking utility, which lets you quickly highlight text on a page and add it to a note that, when clicked, will take you to the web page. It doesn’t go so far as to highlight the relevant text on the page, however.

There are other smaller touches that make Vivaldi a joy. For instance, the loading bar provides details of the size of the page you’re trying to load as well as the number of elements it’s loading.

Another is the simple way Vivaldi handles downloads in the sidebar, letting you pause and retry downloads quickly and easily. The ability to rewind to the start of the domain you’re navigating is also brilliant: if you go down a rabbit hole on the site you’re on, for example, simply hit the rewind button to go back to the homepage or the page on which you entered the site.

It handles history searching in the address bar better than Google Chrome and it feels faster than Firefox; it was always incredibly easy to find a page simply by typing a keyword from the page title.

Not enough features for you? You can add extensions from the Chrome Web Store as you can in Google Chrome.

It’s not all there, though. Performance does sometimes feel a little sluggish with so many things going on at once; I occasionally had to close everything and start again as the browser chugged to a halt while trying to write an email with five seconds of keyboard lag. It’s also annoying that you can’t drag items from the Downloads folder onto pages – into Google Drive, for example – or onto the desktop. It also isn’t possible to break a tab off into a new window simply by dragging it; you have to right-click on it and open a new window, which takes longer and also requires the page to be reloaded.

I also conducted one scientific and one unscientific test to see whether my own feelings about Vivaldi were realised with quantitative data.

In the JetStream benchmark – which tests a browser’s ability to handle complex JavaScript – Vivaldi tied with Google Chrome, was faster than Firefox and Opera, but all four were beaten soundly by Microsoft Edge.

In my second, even less scientific test, I timed how long it took to fully load the Guardian homepage. In this test, Vivaldi was the slowest at nearly 6 seconds, with Firefox beating Chrome, Opera and Edge to the punch.

Interesting figures, but none from which I’d be happy to draw a conclusion at this stage.

Vivaldi is a superb browser for power users. However, it may take time to get your head around, and you may never use all of its features. Chrome and Firefox start off as quick, blank canvasses and perform all the better for it. So while I’ll continue to use Vivaldi at work, for home use I’ll be sticking to the simplicity of Chrome.