We recently looked at the Vita Audio R1, which is a single speaker desktop DAB radio, and we found it to be simply without equal for sound quality when compared to other devices of its size. However, there was no denying its diddy proportions and use of a single speaker limited its maximum volume and also resulted in more intricate and dynamic music getting a little muddled. So, it’s no surprise that Vita Audio has bulked out its range with the R2 to cater for those that require a bit more oomph from their desktop radio.


At its core then, the Vita audio R2 is simply a larger, stereo version of the R1 so it has both DAB and FM radio tuners, two front mounted sockets for plugging in headphones and external music sources, and the same superb build and sound quality. However, there’s also a few bonus additions thrown in that make the extra £60-£90 for the R2 that much more of a digestible price hike.


First and foremost, is the addition of a cute little Infra Red (IR) remote control. The second bonus is the inclusion of a second line-input, which can be used to plug-in and amplify your mp3 player or any other additional audio source. The third and final supplement is a number of equaliser settings, including a 3D wide stereo sound, that enable you to adjust the tonal quality of the R2 to suit your preference. 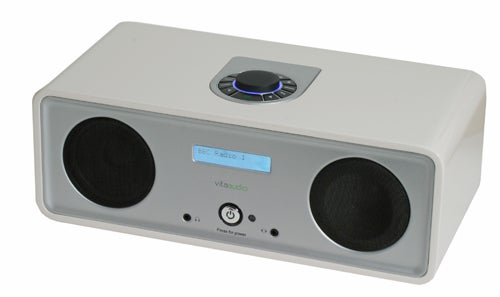 The model we’ve received for review is the Ivory white lacquered version, which actually demands a £30 premium over the otherwise identical wood veneered model, costing as it does £249.99. Having seen the superb quality of the walnut veneer used on the R1 we reviewed, the idea of paying a premium for a shiny version of either model does seem a bit galling – lovely though the finish is. One simply has to assume the lacquering process costs more to do and this cost has to be passed onto the buyer to keep the product profitable. What is without doubt though is the design and construction of the R2 lends it a commanding air that immediately puts you in mind of a quality product.


The drivers in the R2 are the same 3.5inch ones used in the R1 so, in case you were wondering, the R2 isn’t any taller than the R1, indeed it is considerably shorter as the LCD display and jack sockets are mounted in-between the two speakers as opposed to above. The exact dimensions are 340mm x 170mm x 120mm (W.D.H) so it has a fairly considerable footprint that means it will be a little large for many people’s bedside tables and may struggle to tuck-in between the toaster and kettle in your kitchen.

Vita Audio’s signature RotoDial control system sits centre-stage on top of the radio and it looks and feels as good as ever. The volume knob is tactile and accurate, the buttons are responsive, and the layout is simple and intuitive. However, we still maintain that it could be infinitely better if the dial was used for multiple context sensitive functions like manually tuning the radio, scrolling through programme information, or adjusting the alarm time (think iPod interface) rather than it simply being a volume dial and snooze button. The layout looks like that’s what it should do so why not embrace it? That said, knowing how many companies can mess up the simplest of controls, we’d probably rather see an overly simple interface that works rather than a clever one that doesn’t. 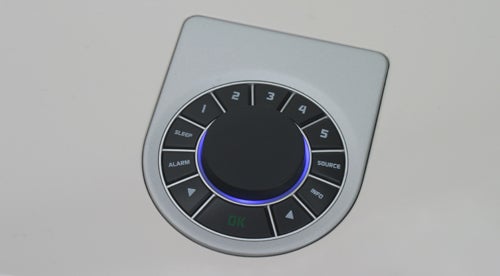 We do have one particular gripe with the controls though, they really should be backlit. When using the radio at night it’s impossible to see which button you’re pressing and with them all being the same shape you can’t tell just by feel alone.


Conversely, we also had a problem with the fact the display and blue ring around the volume dial never actually turn off fully, even when in standby. What’s worse, though, is when set to sleep mode, these lights don’t even dim to their standby levels so they positively light up an otherwise dark room. If you’re a light sleeper this will be an insurmountable problem.


The five buttons numbered 1 to 5 are for switching between and setting station presets. Each button can hold one FM and one DAB favourite and recalling the station requires just a short press. To set the station, you tune to the station you want, hold down the preset button and wait for the confirmation message – it really couldn’t be simpler. 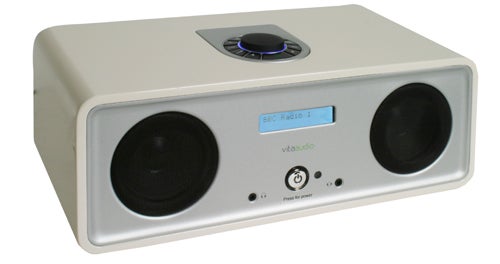 The R2 includes alarm and sleep functions though there’s only one time setting for the alarm – so you’ll need to remember to change the time or turn it off at the weekends. Also the choice of alarm sounds is limited to just Buzz or Radio so there’s no soothing natural sounds like on the Pure DAB Tempus-1 S. For sleeping you can choose from 15 to 90 minutes at fifteen intervals.


The Info and Source buttons both work in similar fashions; tapping them will cycle through the list of options and, once you’ve found the one you want, you simply stop tapping. The information options are comprehensive including date and time, programme information, data rate, and signal strength among others, which is good but par for the course on a modern DAB. The Source button scrolls through the various audio options, namely DAB, FM, Aux1, and Aux2.

To navigate all the menus you use the Up and Down arrows, which also double for changing stations, and tuning the FM radio, while selecting options is done with the OK button. It’s all very simple and only the briefest of glances at the manual is needed to pick it up. That said, there are noticeably fewer options than on many other DAB radios. Indeed that’s something of a feature of the R2. 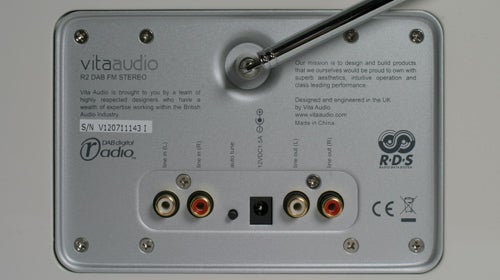 While on some radios you can get recording facilities, battery power, Electronic Programme Guides (EPG) for planning your weekly listening, and larger screens that can display more text at once, the R2 is really very basic in terms of functionality. Whether this is a primary concern is very much going to depend on your listening habits. However, when you can get this functionality in radios costing £100 less, the lack of sophistication is quite apparent. As with the R1, we personally feel the limited functionality probably wouldn’t put us off buying one but we would really rather see this introduced sooner than later.


Round the back you’ll find two sets of Phono sockets labelled ”line in” and ”line out”. The former provides an extra input that’s just perfect for plugging in an external dock for your personal music player – leaving the front mounted jack socket free for temporarily plugging in other devices – and the latter means you can use the R2 as a DAB radio for you Hi-Fi. An Auto-Tune button also lets you manually retune the radio, which is useful if you’re trying to find the optimum position for your radio for it to up the most services or if you want to add a new station. 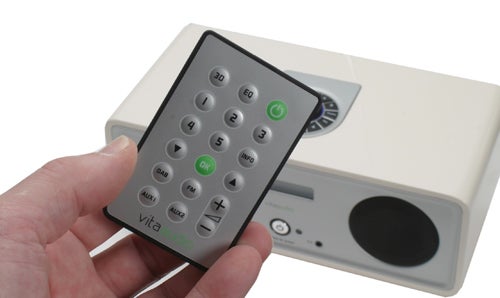 The remote is one of those generic ones that uses little popper buttons hidden under a single printed plastic surface so it doesn’t exactly ooze class. Moreover, it’s reliance on a button cell battery for power means picking up spares when it runs out of juice is a particular pain. That said, the remote feels nice in the hand, is lightweight, and it replicates nearly all the functions that the radio can perform. What’s missing is control of the Alarm and Sleep functions and in their place the EQ and 3D buttons have been added. These two functions aren’t actually available without the remote, which seems a bit of an oversight considering how tiny the remote is.

The EQ button cycles through three choices of Low, Normal, and High and adjusts the music accordingly. Likewise the 3D button toggles on and off the stereo enhancement effect.


Now, normally we steer well clear of such settings as we find they seldom improve sound quality. However, on this occasion we could quite happily listen with any of the options selected. Quickly switching between the Low, High, and Normal settings does highlight the differences making you think Low sounds muffled and High, a bit shrill, but once you’ve become accustomed to each they’re all acceptable.


Even more impressive is the 3D setting that spreads out the soundstage far wider and deeper than the R2’s size would ever have you believe it was capable of. Instruments are easier to pinpoint, vocals are projected out towards you, and ambients seem appropriately distant and surrounding. For more intimate listening we’d recommend you keep it turned off as the effect doesn’t work so well at low volumes. For when you want to crank the volume up, though, this is a useful way to create a more room-filling sound. 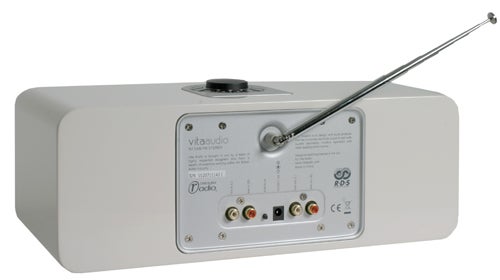 Of course, while the addition of effective sound enhancements is welcome, it’s the overall sound quality that is most important, which is way Vita Audio will be relieved to hear me tell you the R2 does indeed sound superb. Where the R1 was great for close-quarters listening, the R2 can truly fill a room with luscious, warm, powerful sound that, regardless of genre, complexity, or tempo is an utter pleasure to listen to. Bass is strong and defined, mids are punchy and smooth, and the clarity at the top end is exceptional.


In fact, the only problem we could find was not with the R2 itself but with the inevitable noise from a poor quality radio signal. With the amp so wonderfully reproducing every nuance of the signal, whistles, pops, and high frequency chatter are also accurately blasted out at you with full force. In FM mode, there is an option to switch to mono mode to compensate for this slightly but this is compromising in its own way. Ultimately, you should probably check the quality of the DAB signal in your area before plumping for such an expensive device.


The Vita Audio R2 is the perfect solution for anyone who wants a stylish, compact DAB radio that doesn’t compromise on sound quality and has the power to deliver enough volume to fill a sizeable room. It may not have some of the features of other devices and, at this price point, this inevitably affects its overall score. If, however, you’re simply after a DAB radio that sounds great, then look no further.