TV on your mobile is the next big thing, or so they say. I’m not talking little clips of this and that, either, but full blown live programmes, just as you’d expect to see on an ordinary telly.


Virgin Mobile is first out of the starting blocks with real broadcast TV to your mobile with its exclusive Lobster 700TV. Inevitably Virgin Mobile has coined the word ‘tellyphone’ though this only covers part of the deal, as TV is coupled with DAB digital radio.


What’s doubly interesting about the Lobster 700TV is that it is a Windows Mobile Smartphone – Virgin Mobile’s first. Now, my initial thought in this respect is that there was a conflict here. Live TV is a consumer focussed offering, while Windows Mobile Smartphones are aimed more at professional users or at consumers who are keen on keeping a handle on their lives with Outlook PC sync.


It seems like an odd marriage but I guess the choice has been driven because Windows Mobile Smartphones tend to have faster processors than other handsets, and therefore are more capable of handling TV data. Additionally, HTC the manufacturer of the Lobster is a Windows Mobile partner.


My second thought about all this is what watching TV on your mobile might cost. If you want to pay as you go then the Lobster 700TV alone will cost you £199, with the first 90 days of mobile TV free then a fee of £5 a month. Contract customers fare a little better but mobile TV is only completely free if you take a contract of £25 a month.


The Lobster 700TV is large. At 140g it is almost as heavy as Orange’s 148g SPV M600, a more feature rich Windows Mobile Pocket PC Phone Edition device. Physical dimensions are comparable between the pair too with the Lobster 700TV officially coming in at 111.2mm tall x 58mm wide and 23.8mm deep compared with the SPV M600’s 108 x 46 x 19mm. The 58mm of width is a maximum measurement and takes account of the protrusion on the right side that houses the TV and radio on/off switch, and, presumably, the tuner.


Overall, the Lobster’s size has been put to good use as far as the control buttons are concerned, with large number pad buttons, and for a Windows Mobile Smartphone, relatively huge Home, Back, Call and End buttons. The softmenu buttons are thin and long, but I didn’t find them a problem to use. The Navigation button is rather nicely shaped with three square corners and one rounded one and again it is large. Sitting alongside the 3, 6 and 9 keys are markings that indicate you can use these keys to move up and down channels, pause and move between TV and DAB radio. 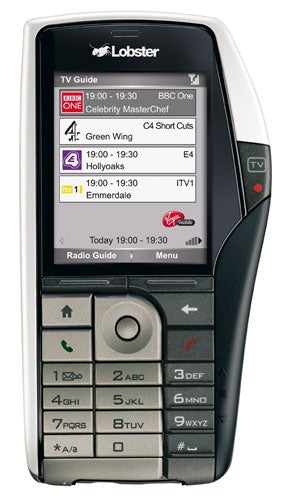 I’m not delighted with the build quality. As already noted, this is a HTC made device, and usually that company does a good job when it comes to build, but here things feel a little less solid than usual. The casing looks like the plastic it is, and the numberpad buttons, while nice and large, have a lot of movement in them, almost as though they might come off.


Bluetooth is built in but is neither infrared nor Wi-Fi (the latter is still rare for Windows Mobile Smartphones). The handset is Tri-band GSM, and there is a 1.3 megapixel camera on the back with neither flash nor self portrait mirror to give its low megapixel count a lift. HTC could easily have made the large silver surround for the lens double as a self portrait mirror but chose instead to inlay grooves into most of it.


What irritates me most in terms of technical specifications though, is the memory expansion system. The press information Virgin Mobile distributed with my review handset did not even mention memory at all – perhaps they think it is something device users aren’t bothered about.

Nonetheless, with the handset reporting 71MB of available storage out of the box, if you have any intention playing digital music through Windows Media Player you are going to want to add memory.


The expansion medium selected is microSD cards. Regular readers will know I am not the greatest fan of this format because it is so very tiny. I’m doubly irritated in the case of the Lobster 700TV to find that the slot is not only under the battery but also under your SIM card. Yep, you need to power down, take the battery out and take you SIM out to swap cards. What on Earth is HTC thinking of, designing a memory expansion system like this when end users are likely to want to hot swap cards to get music in and out of their handset?


Still I guess what you really want to know about is the TV and DAB radio capabilities and performance. The service comes courtesy of BT Movio. TV-wise you get BBC1, ITV1, Channel 4 and E4. But note: Channel 4 is just showing its Short Cuts service, a made for mobile TV channel, and the BBC service is available only on a 12 month trial basis. Some American, film and sports content will be missing according to BT’s announcement of its Movio service. 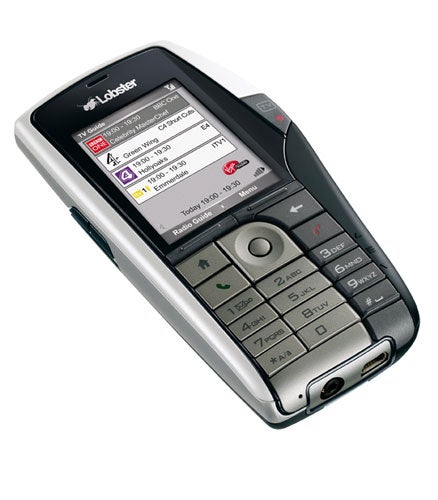 For both TV and radio you have to have the stereo headset plugged in, as this contains the antenna. It is truly annoying that this has a 2.5mm jack with no provided converter to 3.5mm, and that the jack is on the bottom edge of the casing. As for performance, I had no trouble picking up TV broadcasts – though I didn’t have an opportunity to test the system in fast moving situations such as when on a train.

Rendering to the screen was fine once the initial buffering processor was completed, which only took a couple of seconds. There were some periods when the handset re-buffered data, but these were few and far between during testing. Broadcasts seem to be about 20 seconds behind what I was able to pick up on an ordinary TV.


The seven day programme guide isn’t as neatly implemented as I’d have liked – you have to scroll through time in half hour slots. So if you want to see what is on tomorrow at the same time you are watching now, you need to do quite a lot of pressing of the navigation button, which takes time and is quite annoying. You can set reminders to watch a particular channel at a particular time.


When it comes to DAB radio I had access to not far short of the maximum of 50 stations in my test area in deepest South London. The number available to you will depend on where you live, just as it does with DAB generally. Meanwhile, the TV On/Off button doubles as a provider of quick access to interactive services provided via the Web where these are available.


I did two battery tests on the Lobster 700TV. An ordinary MP3 rundown test playing music from a miniSD card and with the screen forced to stay on gave me eight and a quarter hours of music and battery life, which is on the upside of average. I also did a continuous TV playback test and got a shade over three hours of viewing from a full battery. You are, then, going to have to limit your viewing while out and about.


I am in two minds about the Lobster 700TV. Yes, it has all the capabilities of a Windows Mobile Smartphone, with TV and DAB radio thrown in. But the number of TV stations it handles is small – which is why I’ve given it such a low value rating – and I can’t really see myself wanting to squint at its screen for long. Surely nobody is that addicted to TV that they can’t video something to watch later on a bigger screen? 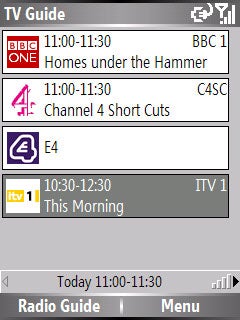 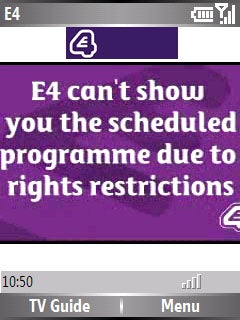 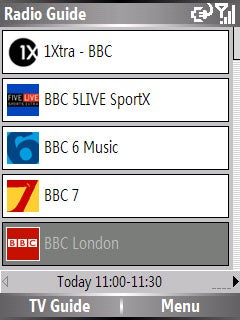 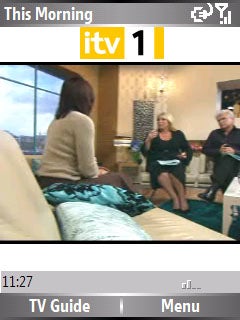 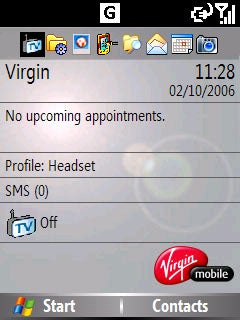 These are images from the camera. 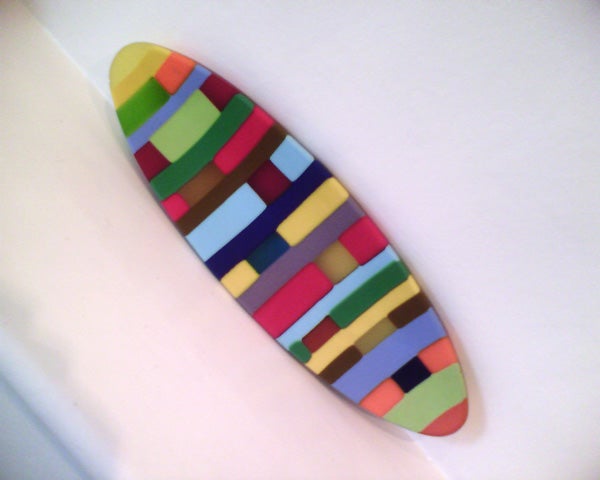 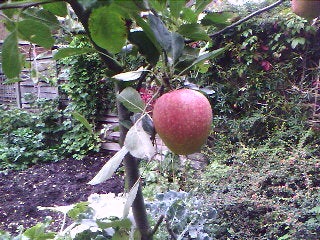