The Virgin Intelligent WiFi Pod is a solid option for Virgin Media customers with Hub 3 and Hub 4 routers looking to boost Wi-Fi speeds and stability around the house. Easy to set up, coverage has been better, wireless range extended and there have been fewer connection drops. For many, this is an easier (and cheaper) upgrade compared to buying an entirely new mesh system

With more people staying indoors, home Wi-Fi has taken a battering. People are using the web to socialise more, game, hold meetings over Zoom, as well as stream video and music.

That’s meant once reliable speeds and coverage aren’t quite as robust. Virgin Media has been lagging behind the competition, providing just a single router and optional wireless boosters that run over your home’s power lines. Today, it has a new solution for better Wi-Fi: the Intelligent WiFi Pods.

The aim of these ‘Pods’ is to extend the reach of Wi-Fi within the home and make speeds more reliable and faster. Available to Virgin Media customers with the Hub 3 and Hub 4 routers, is the Pod the Wi-Fi saviour you’ve been looking for?

The WiFi Pods are part of Virgin’s rollout of its Intelligent WiFi Plus service, available to Virgin customers with Hub 3 and Hub 4 routers. As part of the Plus service, you get a WiFi Pod for an additional £5/month. There is no one-off fee.

Virgin Ultimate Oomph and Gig1 customers can, however, sign up at no extra cost. There’s some room for confusion between Virgin’s Intelligent WiFi and its WiFi Plus service. The former is a free update to Hub 3 and 4 routers that automatically sorts out any Wi-Fi kinks.

The Plume powered Virgin WiFi Pod is a hexagonal-shaped device (I am tempted to call it The Hex in reference to Wandavision), and its inelegant shape makes for an awkward fit alongside another plug.

If you’re using an extension you’ll want one with at least three sockets. Otherwise set-up is a case of plugging the Pod in and waiting – it’ll automatically ‘see’ your router settings and network conditions, joining and extending your wireless network wirelessly, creating a mesh network. 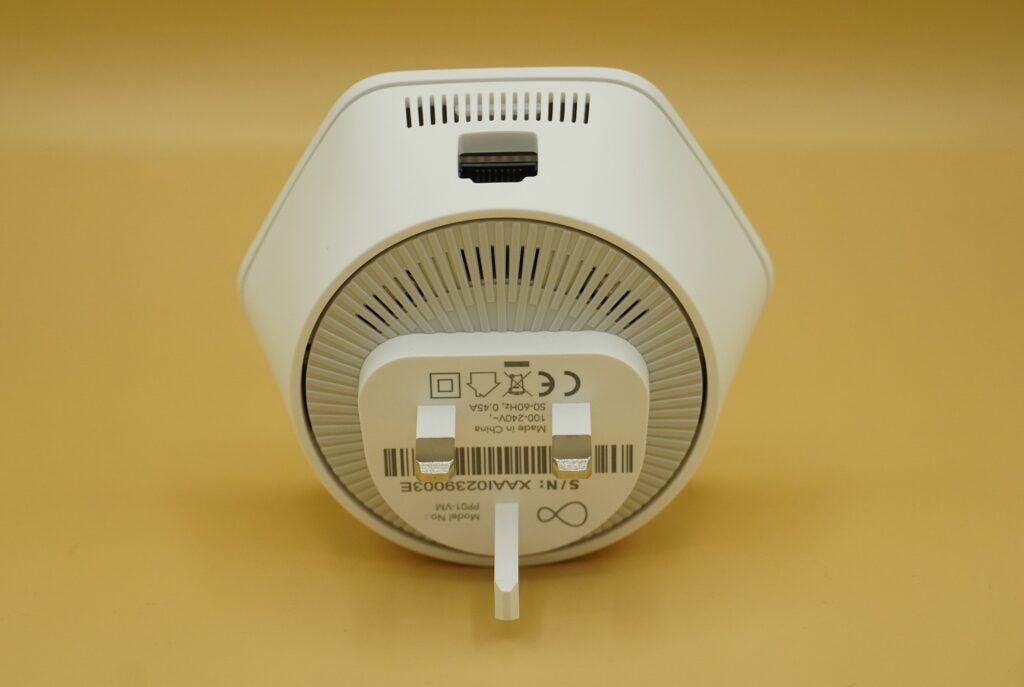 Virgin says the best area for placement is a) out in the open and b) around halfway between the router and the blackspot area, though obviously there’s room for adjustment depending on the location of mains sockets. Two additional WiFi Pods can be added for those with bigger homes.

Despite its inelegant shape, in use the Virgin Intelligent WiFi Pod is elegantly simple. There’s an Ethernet socket for a hardwired connection, while visual touches are restricted to a red Virgin logo on the top surface and an almost imperceptible LED light. All going well, for the majority of the WiFi Pod’s lifespan you won’t see the light in action. It pulsates during set-up, blinks when it is improving the Wi-Fi signal and once it’s done it turns solid before turning off completely.

That process can start up again if there’s a change in the Wi-Fi environment, or if the Virgin Hub has reset itself. If you find it’s blinking consistently and for longer than usual – as happened to me on one occasion – I’d suggest rebooting the main Hub to get them back in sync. If you spot any other LED colours or notice it didn’t blink during set-up, you may have an issue. If so the Pod can be replaced at no extra cost. 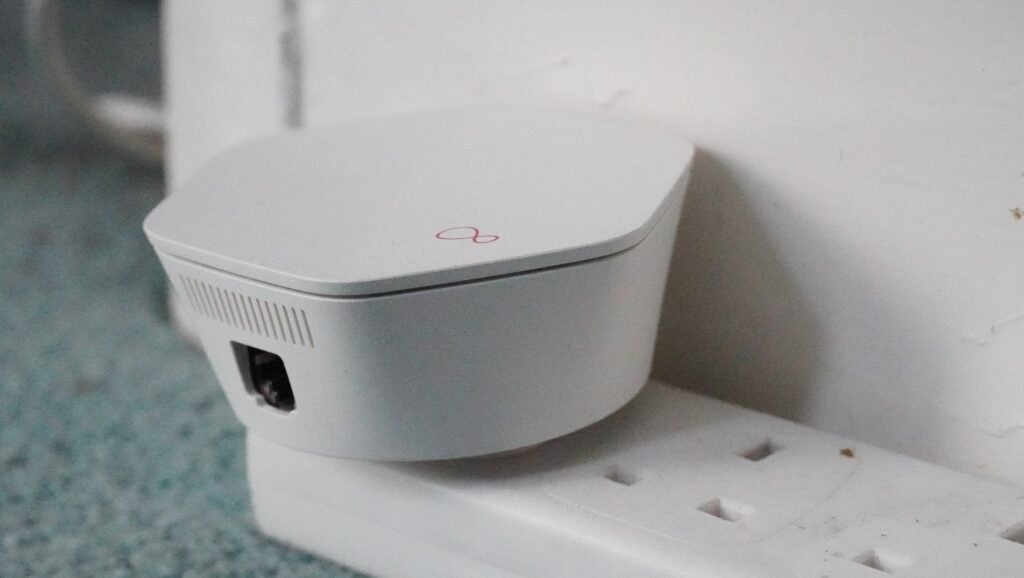 With support for in-home roaming, devices are pushed to the closest port of Wi-Fi access whether that’s the Hub or Pod. Adaptive Band Steering indicates which frequency range out of 2.4Ghz and 5GHz a device should be on. There’s also the Virgin Connect app (iOS/Android) to check on the health of the home Wi-Fi as well as search for any blackspots.

A few more extra things to note about the WiFi Pod. As it creates a mesh Wi-Fi network with the router, there’s the chance for interference with other mesh systems such as Sonos, although that can be avoided by hooking your Sonos system up to Wi-Fi. I haven’t encountered any issues, but then my speakers aren’t in close proximity to the Pod either. It also means it can’t speed up the performance of Sky Q boxes/mini boxes as they have their own Wi-Fi connection they converse in, although you can follow our guide to fixing Sky Q connectivity issues if you do want to run the system over this mesh network. Scanning Virgin’s Troubleshooting section and there can be issues with Ring doorbells, too. Virgin suggests a manual re-connect if the doorbell won’t re-connect on its own.

Having had the WiFi Pod plugged in for nearly six weeks, the performance is what the Wi-Fi Doctor ordered.

The weakest area in the house is on the first floor and out towards the rear garden (the Hub is closer to the front of the house). Wi-Fi connections would become noticeably weaker here.

With the WiFi Pod plugged in, speeds jump to an average of 69Mbps upload and 75Mbps download. That is a solid increase, reaching levels in the furthest part of the house similar to those from a couple of metres away from the router. You can check our list of the best Wi-Fi extenders for other options in boosting your home Wi-Fi.

It is an improvement, but this isn’t the fastest wireless mesh system. Here, Virgin uses dual-band wireless technology (speeds not disclosed), rather than a tri-band design, such as with the Netgear Orbi RBK50, where one wireless channel is dedicated for communication between satellites. In practice, tri-band systems are much faster.

Virgin is also using the older Wi-Fi 5 technology, rather than Wi-Fi 6, as used on the far more expensive Orbi RBK852. While Wi-Fi 6 devices are still in the minority, the technology is more future-proofed and adds even faster speeds.

If you wanted better Wi-Fi with Virgin in the past, the only option was to stick the Hub into modem mode and upgrade to a mesh system, meaning additional boxes and clutter. The Virgin Intelligent WiFi Pod is a simpler, more integrated option that works with your existing router, building a wireless mesh network. For me, stability has improved in weaker areas, coverage is better and there have been fewer connection issues.

Virgin Media customers suffering from less than average speeds around the home can look forward to boosting it with the WiFi Pod. It comes at a cost of £5/month, and in the short-term that’s easy to accept; over the course of a few years it might sound a little too steep. If you want to boost reliability, it’s a good upgrade, but if you want much faster speeds, opt for a different mesh system.

You should buy the Virgin Intelligent WiFi Pod if…

You shouldn’t buy the Virgin Intelligent WiFi Pod if…