Though we love netbooks like the excellent Toshiba NB200, one of our major complaints with most of them is that they only offer VGA video outputs. This is despite innovations like nVidia’s ION introducing support for digital video outputs. It’s not just netbooks either; even some budget laptops and desktops still suffer from the lack of a digital video output. Quite aside from wanting digital quality, with some monitors now eschewing analogue altogether in favour of DVI, HDMI and DisplayPort, this can be a real problem. Thankfully, VillageTronic’s ViBook+ provides a solution. 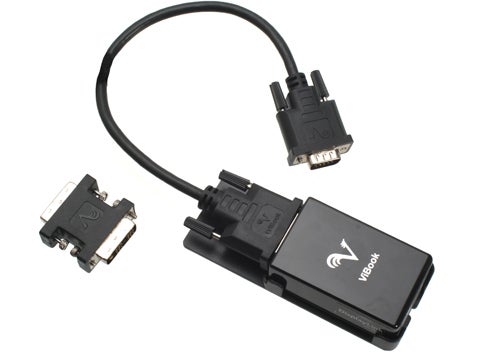 This little device uses a technology called DisplayLink (not to be confused with DisplayPort, which is a connector standard) to output a digital video signal through an ordinary USB 2 port. It does this by compressing the original signal by means of a software-based virtual graphics card, reducing the bandwidth to a level which USB can cope with. It then decompresses it again using a chip on the device itself. The result is a standard DVI signal seemingly being outputted from a USB port. This is all done in real-time and you can run resolutions up to Full HD (1,920 x 1,200) – the cheaper ViBook can handle up to 1,680 x 1,050 or 1,600 x 1,200.


Since the last time we looked at a DisplayLink product, the impressive Toshiba Dynadock U10, the technology has been updated to work with MacOS as well as Windows, though Linux users will have to wait a bit longer yet. 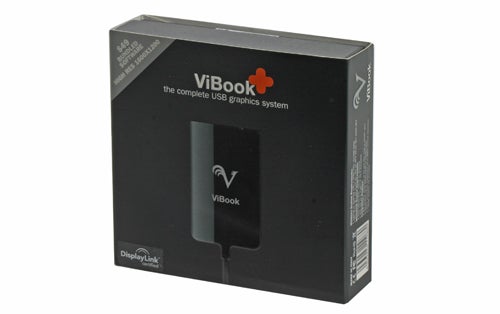 We must say the ViBook+ is very attractively packaged. Inside the embossed box you get a software CD (the cover of which doubles as a quick-start guide), USB to Mini USB cable, short VGA to DVI adapter cable (both ViBook-branded cables come with Velcro cable ties), a male-to-male DVI-out adapter and of course the ViBook+ itself with included VESA mounting bracket and screws. Basically you get all the accessories you could need or want aside from possibly a DVI to HDMI adapter. The included VT MultiDisplay software (which we’ll get to in a bit) is a nice addition as well. Of course, this is no less than you would expect given the roughly £116 asking price (it’s actually €129 direct from VillageTronic’s website with free shipping, which is cheaper than from any UK retailer we have found).

The ViBook+ itself is a small rectangular box measuring 4.4 x 7 x 2.2cm (WxDxH) and weighing a solid 88 grams. It’s well-built and fairly attractive, though as always its glossy black exterior does pick up fingerprints and dust easily. Its base, which naturally rests against the back of most monitors you plug it into, consists of a matt surface covered in small extrusions with four rubber feet to prevent damage.

Its Mini-USB input is recessed very far into the device, making insertion a little fiddly and leaving the circuits inside exposed. This would be more of a concern were it not for the aforementioned ViBook-branded USB cable, of which the mini USB plug is moulded to fill this gap perfectly. This makes it a very tidy solution, looking almost like the cable is permanently attached. The DVI output, meanwhile, has two screw holes so you can attach any cables or adapters securely.


Before installing the device you’ll need to install the driver, as – unlike with most DisplayLink devices – there’s no embedded driver in the ViBook+ itself. Another slight niggle is that we needed to download the latest driver for smooth operation with Windows 7 – despite the software’s auto-update claiming we didn’t need to update.

VT MultiDisplay is an interesting piece of software. Developed by VillageTronic, it sells for $49 (around £30) on its own so it’s a significant value-add, though only if you like the features it brings. It allows you to manage windows, wallpapers, taskbars and screen savers over more than 10 monitors! It’s impressive stuff, especially given that you can have separate display profiles for each of these. VT MultiDisplay adds new buttons to windows that let you instantly maximise a window across all displays or snap it to a single one, allows you to stretch a single picture across all displays as desktop wallpaper or have a different one on each, gives you individual taskbars for each screen and the list goes on.

There are a few caveats, however: it didn’t work properly on one of our test machines, and certain features (such as Mirroring, which will duplicate the main display or a portion thereof on any number of secondary monitors) won’t work with Vista or Windows 7. Hopefully VillageTronic will be updating the software as soon as possible, but for now only Windows XP users will get the best out of it. It must be said that navigating around the options also isn’t quite as intuitive as it could be. Handy as it is, we hope VT MultiDisplay isn’t adding too much to the cost of the device since many users won’t even need it.

Back to the ViBook+, with the latest driver it worked flawlessly first time around on XP, Vista and Windows 7. Best of all, it does everything it says on the tin, including Full HD 1,080p video playback without a hint of stutter! This is especially impressive as it’s something no other DisplayLink device we’ve looked at has yet managed, and really shows off the potential of the technology. 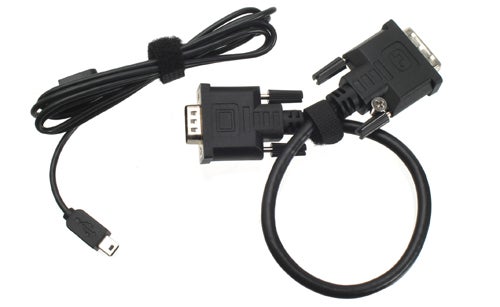 One down-side here is that you need a processor that can cope, with VillageTronic recommending a 1.8GHz CPU as minimum. Indeed we tried this feature on a Dual Core 1.3GHz Intel CULV-based laptop and the experience was quite simply a juddery mess. Still, it’s great news for those with adequate computational power but no digital video output, as the ViBook+ will quite happily output to your Full HD TV with a simple DVI to HDMI adapter. Just keep in mind that it can’t handle HDCP, so if you went for the Blu-ray option on that Sony VAIO-VGN-NS30E-S you’re still out of luck. 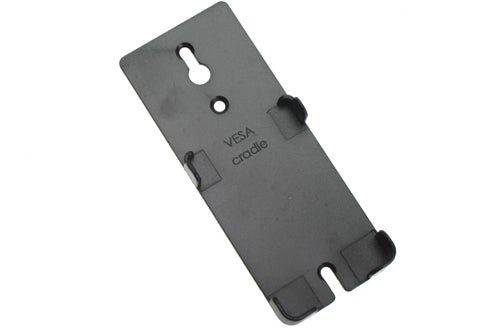 Overall then, the ViBook+ is attractive, well-made, eminently portable and very easy to use, giving computers that lack it a digital video output and allowing ones with only a single connector to run a second display – all backed up by a generous three-year warranty. However, at £116 its high price point does limit its appeal, especially since it’s hardly the only DisplayLink product out there. Toshiba’s Dynadock U10, for example, gives you Ethernet, a 6-port USB hub, VGA and DVI video outputs as well as audio connections over a single USB cable for around the same money. Of course, though fine for everyday tasks it doesn’t handle HD video very well, is far bulkier and requires an external power source, so it’s a matter of horses for courses. 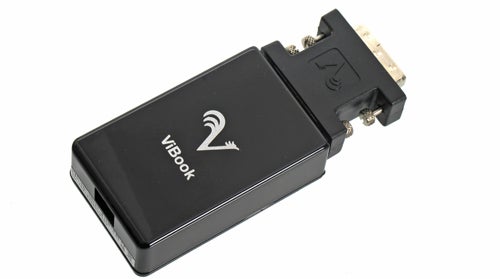 
VillageTronic’s excellent ViBook+ really shows off the potential of DisplayLink technology, but on a product that already has niche appeal its high price unfortunately precludes it from the recommended award it would otherwise receive.