With the short cable, body that gets a bit too hot, slightly loose carpet glider and a short cable, the Vileda Steam Mop gets a fair things wrong. Yet, for these annoyances, what the steam mop does well is clean, and we found that this is one of the best machines for cleaning hard floors. Carpet performance was good too, although the mop did leave behind a few fibres from its cleaning cloth that we had to vacuum at the end.

The Vileda Steam Mop packs in a powerful steam heater, triangular head with tilt and pivoting neck, and variable steam power. It’s robust, simple to use and even has an attachment to steam clean your carpets.

The Steam’s cleaning performance on hard floors is among the best, giving a smear-free finish, and steam production is outstanding. The short cable, lack of cable clips and several operational quirks take some getting used to, but, for very effective steam mopping at under £100, the Vileda is a great choice.

Vileda is perhaps the most famous name in floor mopping thanks to TV commercials that anyone over 40ish will remember fondly. Yet those ads were for traditional ‘bucket and chuck-it’ mopping, and things have moved on. The current Vileda Steam steam mop is bang up to date with chemical-free, bacteria-busting steam cleaning for a variety of floor surfaces, including carpet.

This robust feeling steam mop offers an impressive 1550Watt steam heater, variable steam output and a good size floorhead with a triangular shape. That is claimed to ease your way into corners, but I can’t say we have ever had an issue getting rectangular heads to fit neatly into a right-angled room. 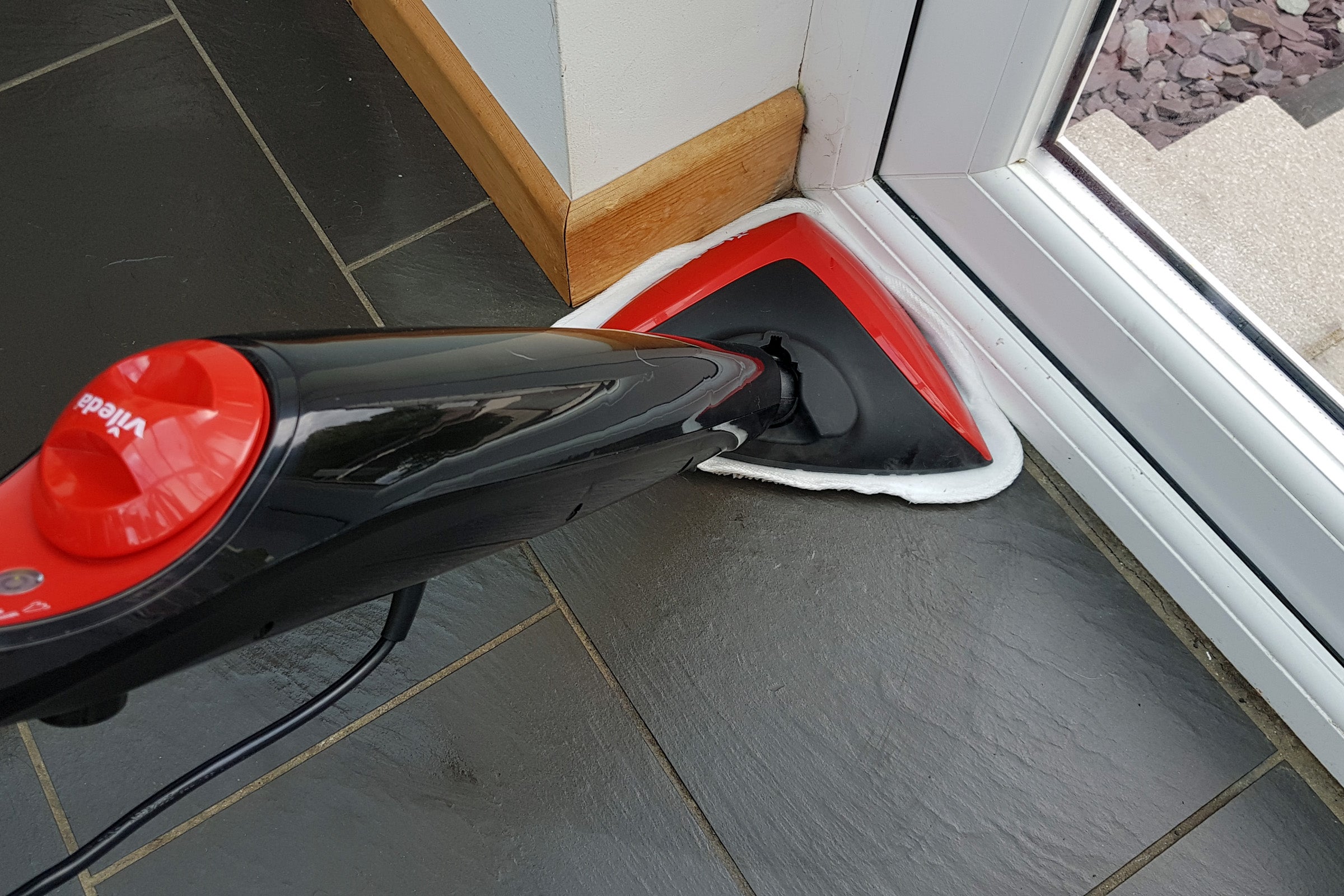 The machine is packed tightly into its colourful box yet requires little assembly. The robust steel-tube handle clips firmly into the top of the body, and the floorhead pushes home at the other end. If you do feel the need to disassemble it,  you will need a screwdriver to release the handle, muscles like Schwarzenegger to pull the head back off and a black belt in origami to fold the thing back into its box. Suffice to say, it’s designed to be left set-up and ready to go.

The first thing you notice is that the Vileda is quite a tall unit. The grip part of the handle is around 125cm up. That has the effect of putting the floor head quite a way out in front of you in use. Despite the solid feeling build, it’s sensibly lightweight though. Filled with water (cable trailing) it tipped our scales at 2.25kg. Empty and with the cable would onto the handle to put it away, it went 2.5kg. 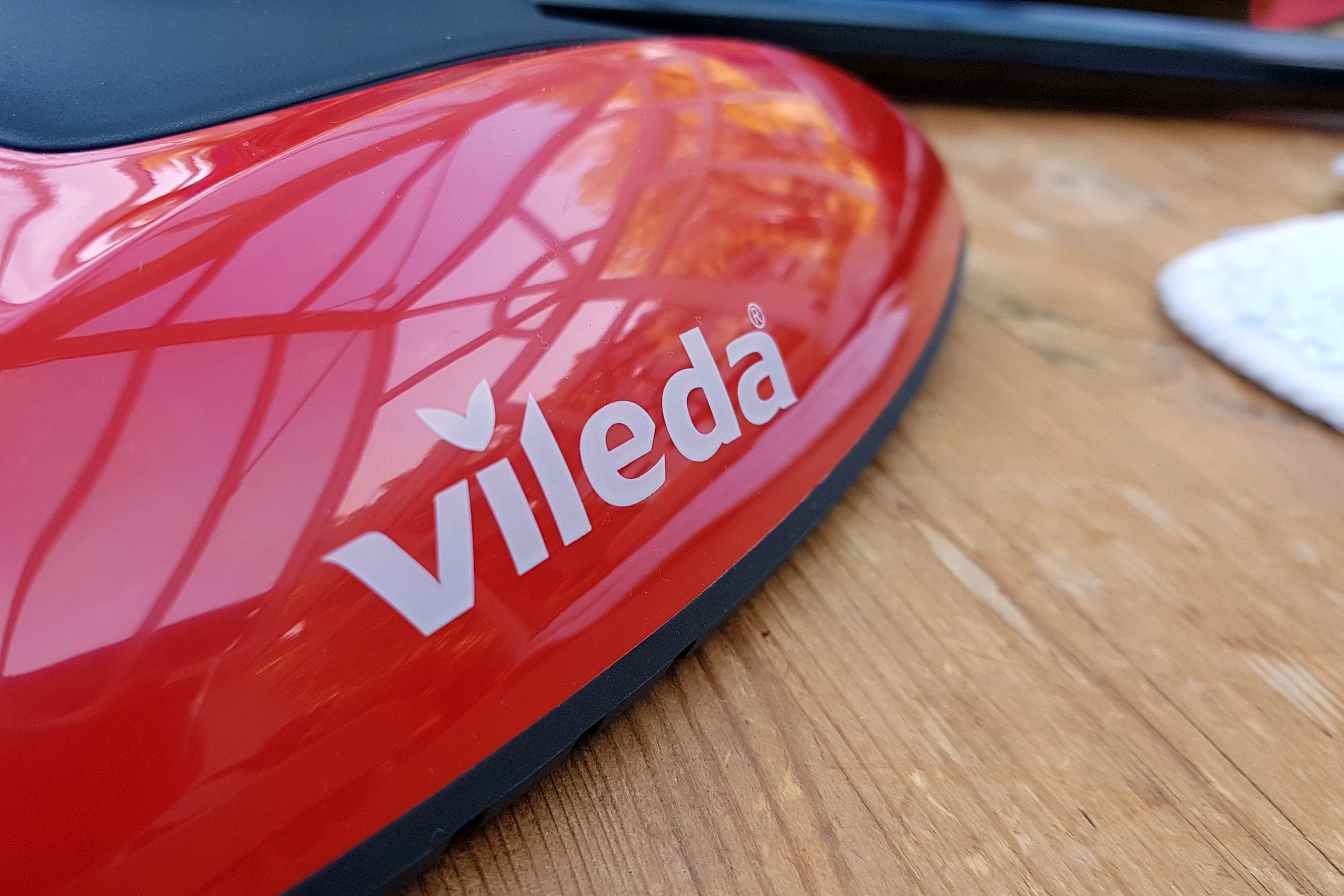 The cable itself goes a less-than-generous 5.9m in length. That is OK for small kitchens, but if you want to move any further afield expect plenty of plug-socket swaps. It is also an awkward length for the winder, with a hanging tail that won’t quite go back around the top hook. There are no cable clips either, so it swings about at knee-bashing height when you carry the mop from the cupboard.

The controls are simple enough. You get a big screw-on filler cap, on/off switch on the back, and a Min to Max steam control on the front. 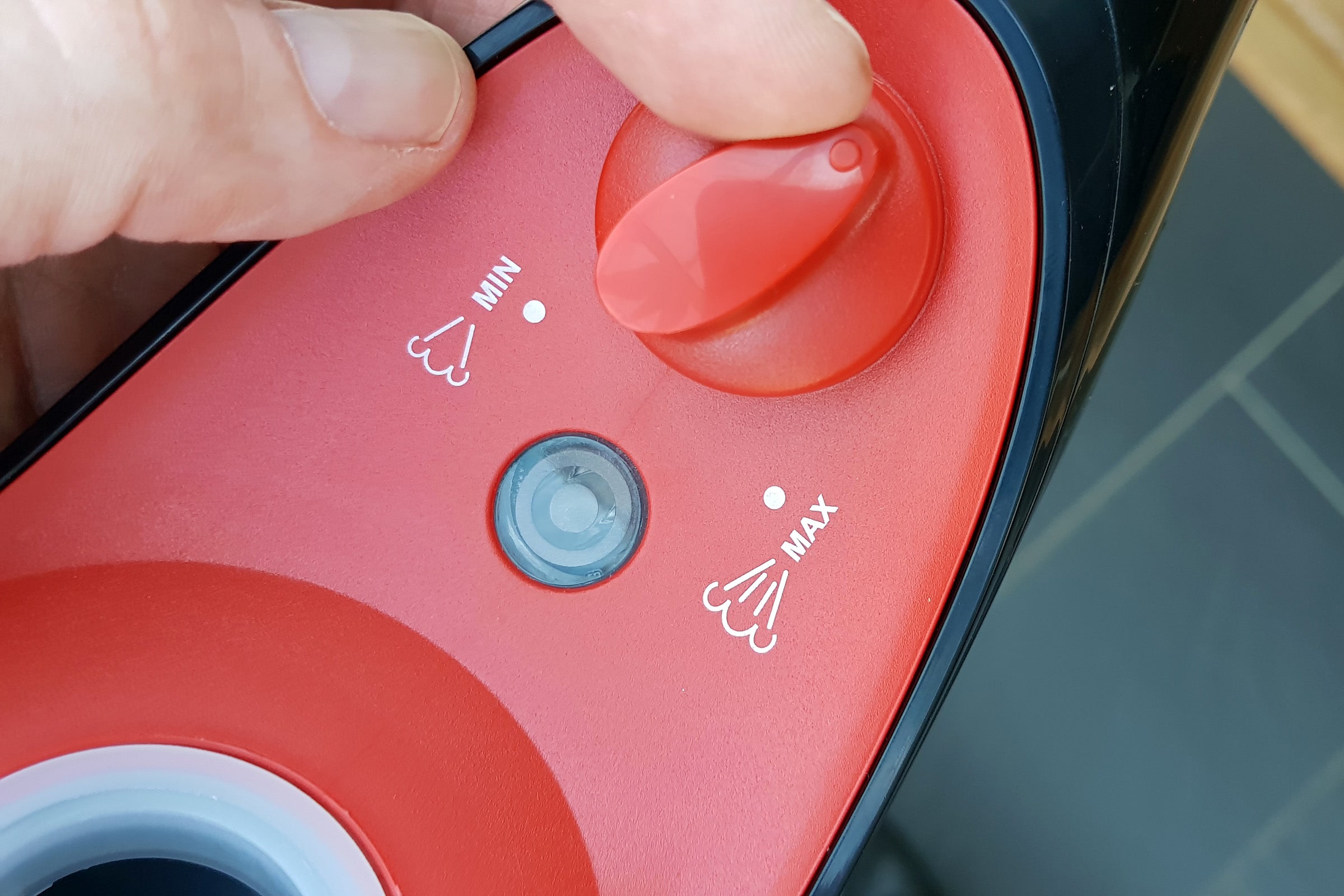 At the business end, the triangular floor head is a good size, and its fully articulating ball-and-socket neck gets a big thumbs up for manoeuvrability. The microfiber pads attach by six hook and loop pads underneath. These hook onto the pad material itself, as opposed to specific strips of loop tape, making it a bit of an art to getting the pad on evenly. As the pads are a centimetre or two bigger all round than the head, there is plenty of fitting latitude though. 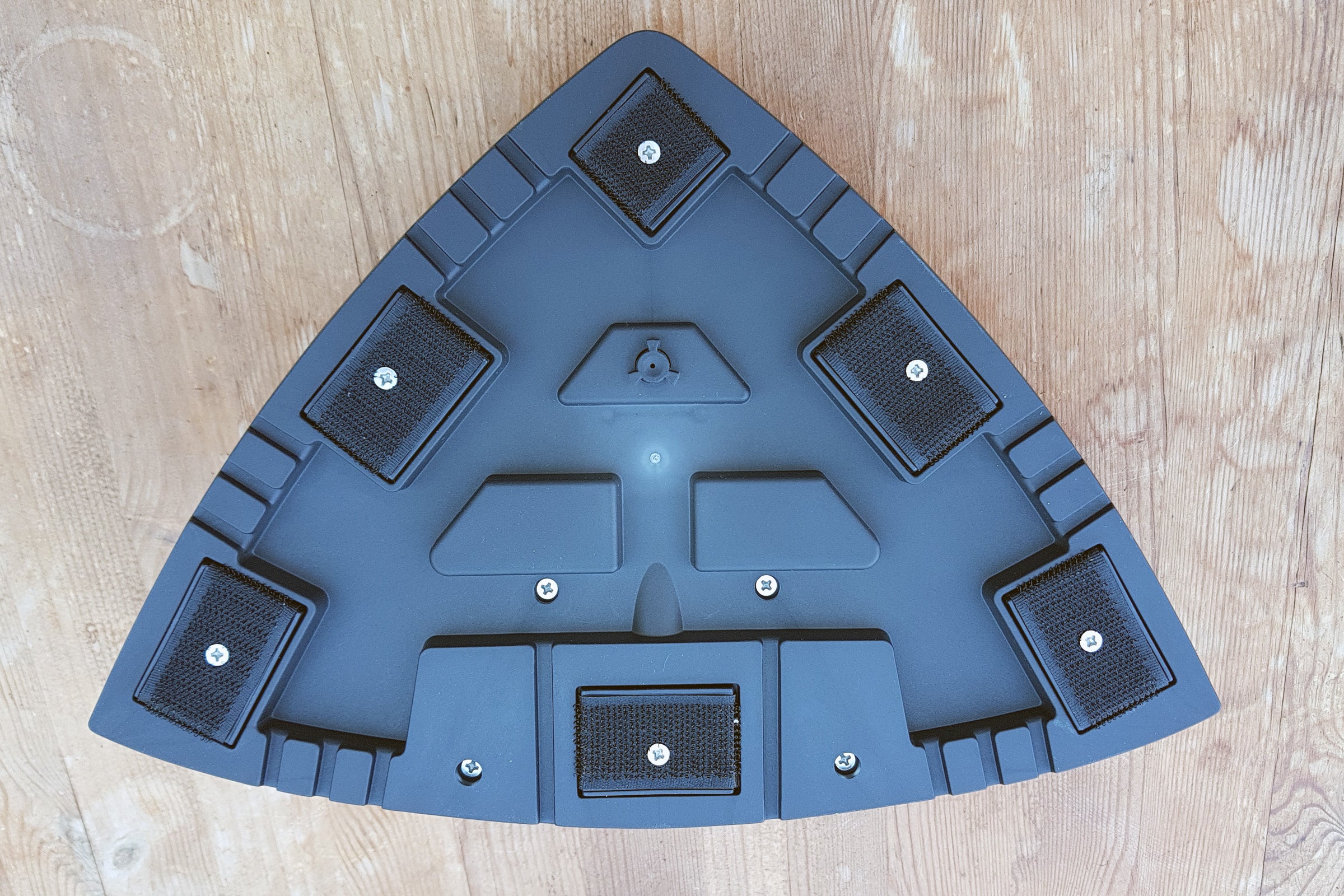 The carpet glider attachment fits over the pad and holds onto the floorhead with light pressure from clips on each of its three sides.  With or without pads and gliders, the machine stands upright on its own, which should help stop it leaping out of the cupboard at you. 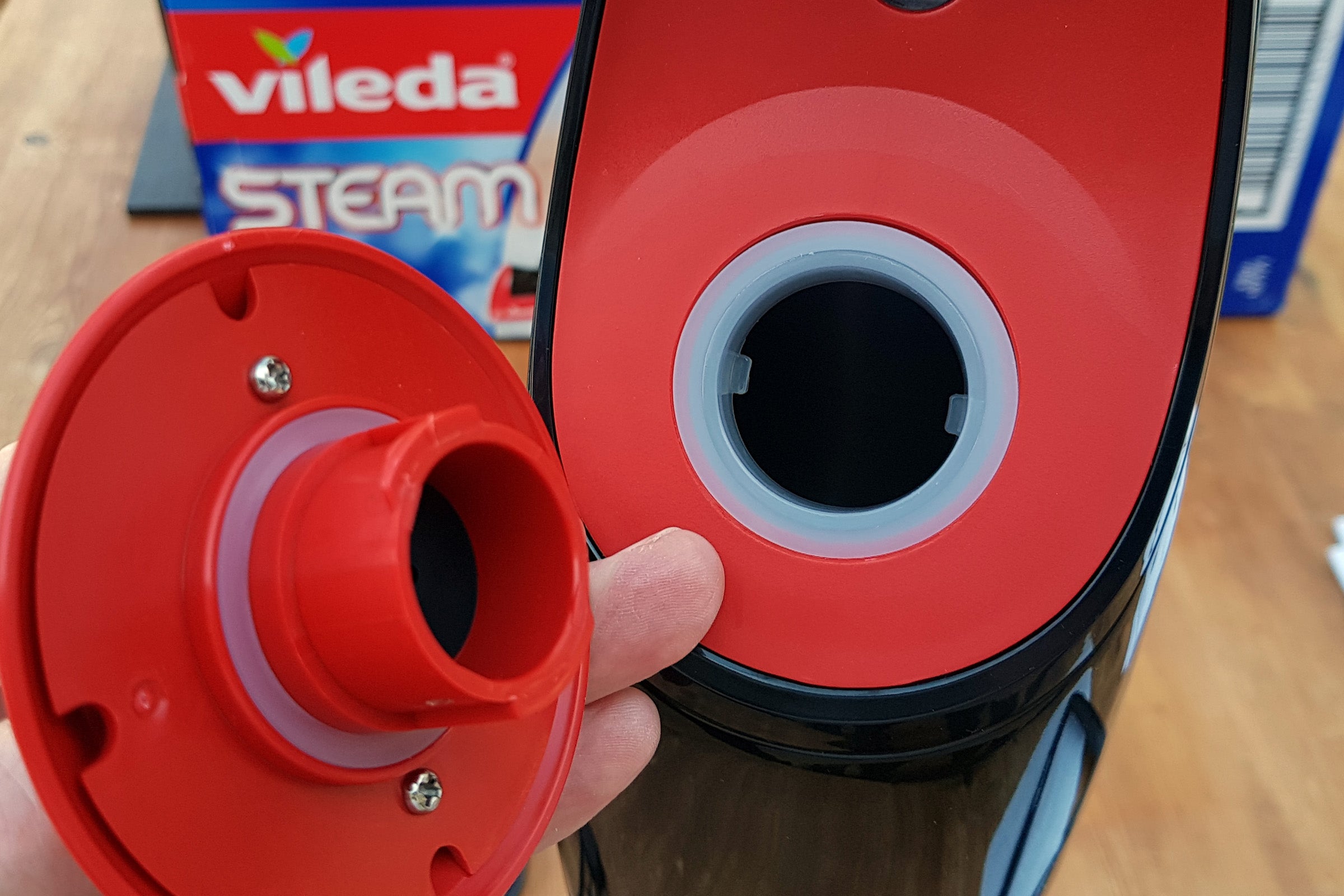 The large filler cap is a welcome addition to the Vileda’s talents. It has a big grip section that helps removal and pulls away to reveal a decent-sized filler opening. The tank is 400ml in capacity, and the supplied measuring jug is just 200ml. Go figure. Two trips to the sink later and the Vileda Steam was full. 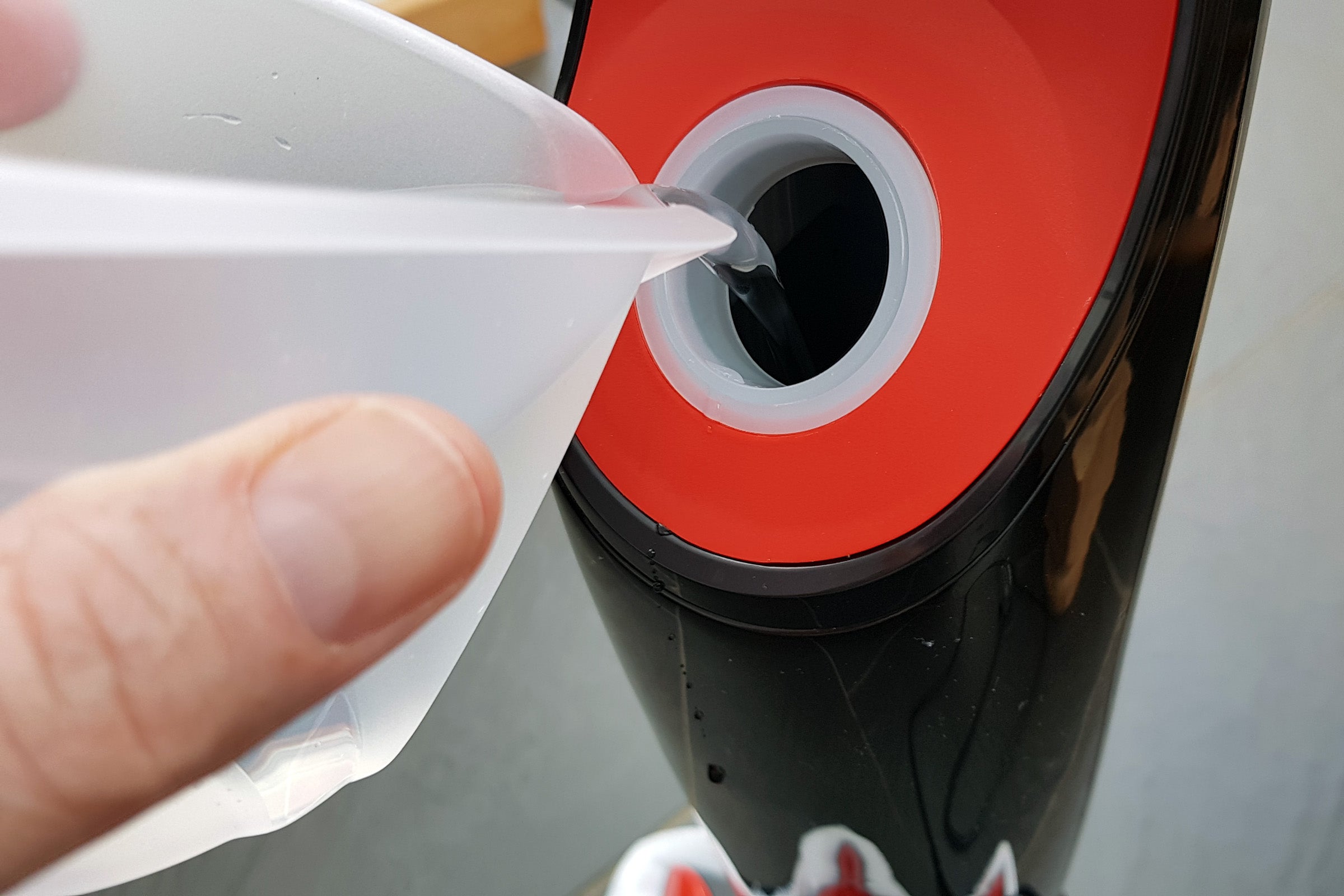 Plugged in and switched on, you get a green light on the front to say things are working. There are some pumping, clicking sounds and, in less than a minute, the floor head is steaming well. 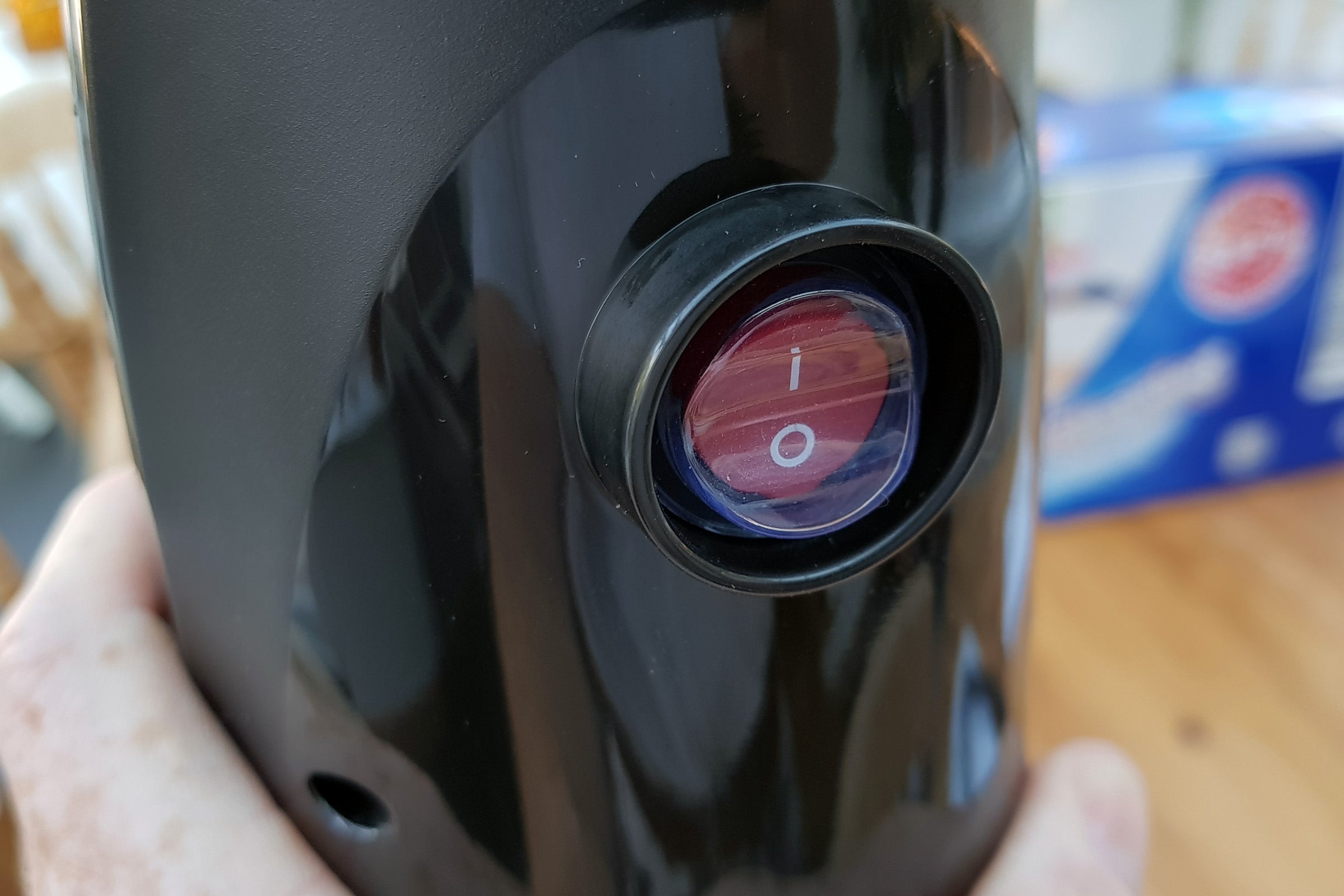 A word of caution, though. Unlike many steam mops we have tested that switch off the steam when the machine is fully upright, the Vileda steams all the time. If you leave it standing upright, say to move some furniture, it constantly steams into the floor, and for robust surfaces like ceramic tiles that isn’t going to be an issue. Yet for laminates or wood floors with a sealant coating, I can’t see that doing the surface any good at all. 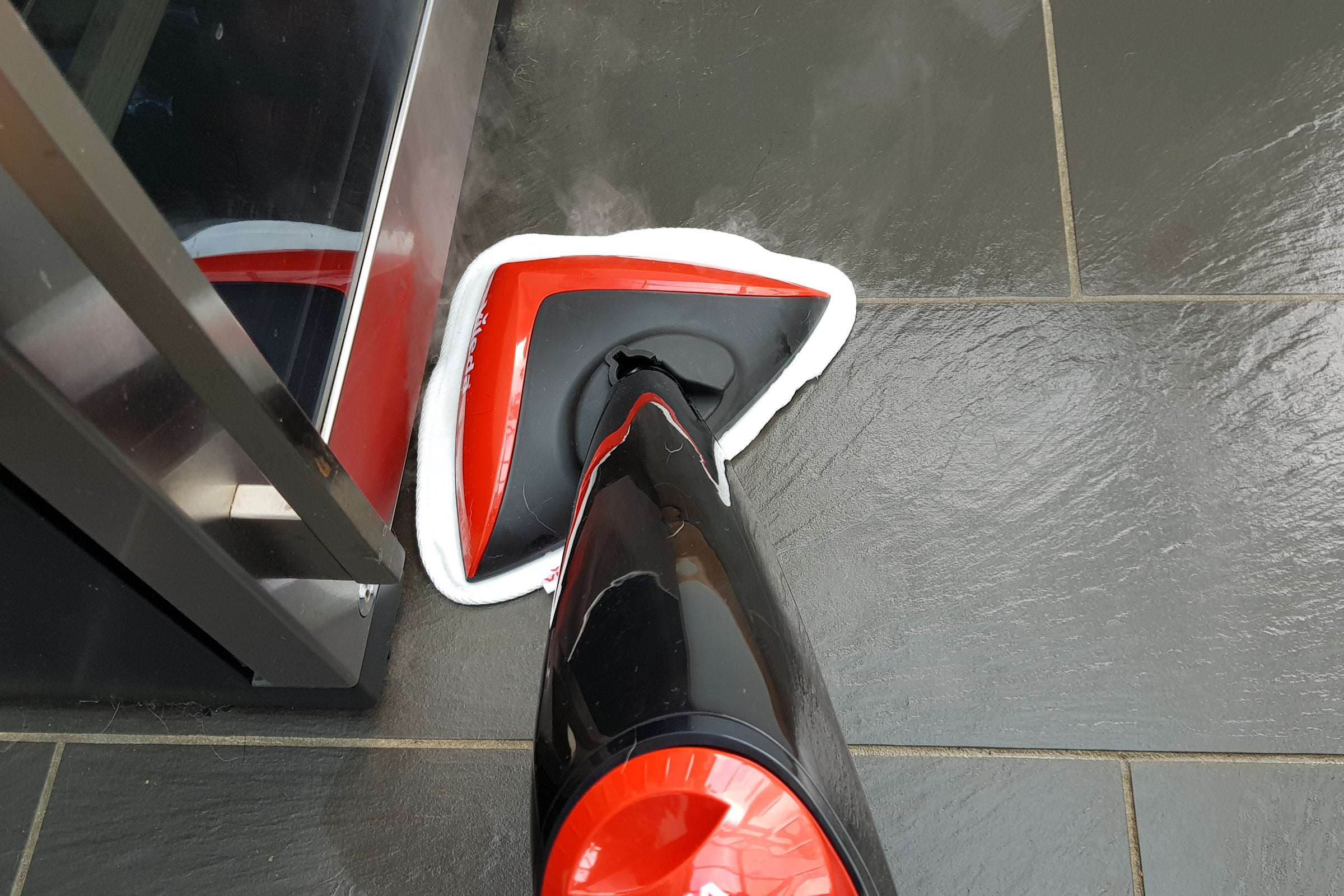 The upshot is that you need to physically switch off the machine if you are pausing – even for a minute. Switching back on, you need to wait 30 seconds or so before it is steaming again.

What isn’t a fault is the Vileda’s steam production. Even on the minimum setting, it has enough steam to address lightly soiled, smooth surfaces like laminates. The steamed finish was very clean, without any smears or stains. This suggests Vildea has nailed the combination of steam production and mopping ability to produce a very clean finish. 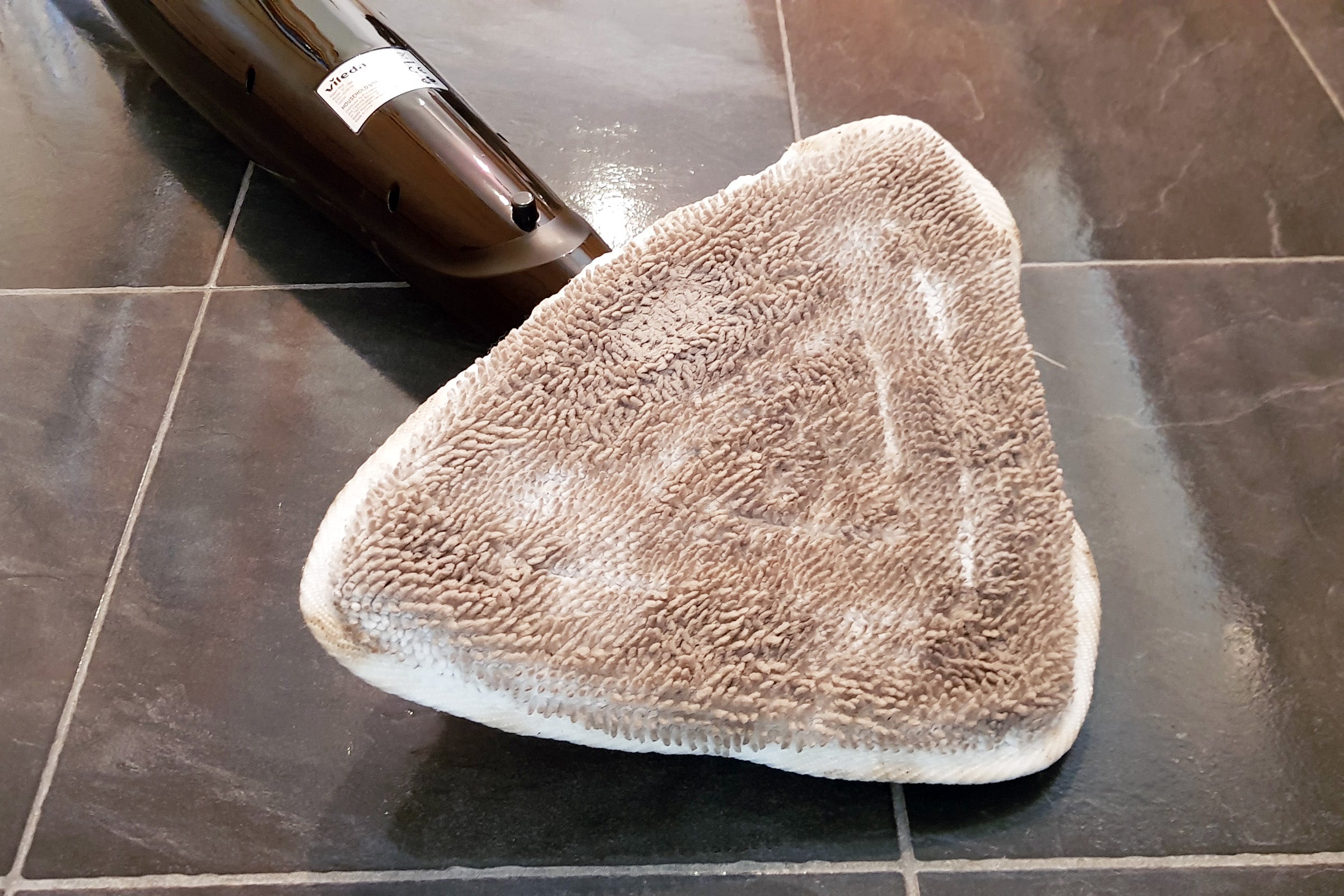 The machine’s height seems to give it a nice balance in hand, and it slides around well. The extra movement afforded by the ball-and-socket neck of the floorhead gives you extra scope to manoeuvre the head around on stables and into corners. While it doesn’t ‘steer’ like a vacuum cleaner, it does allow you to wiggle the floorhead into spaces without having to change the direction of the whole machine. 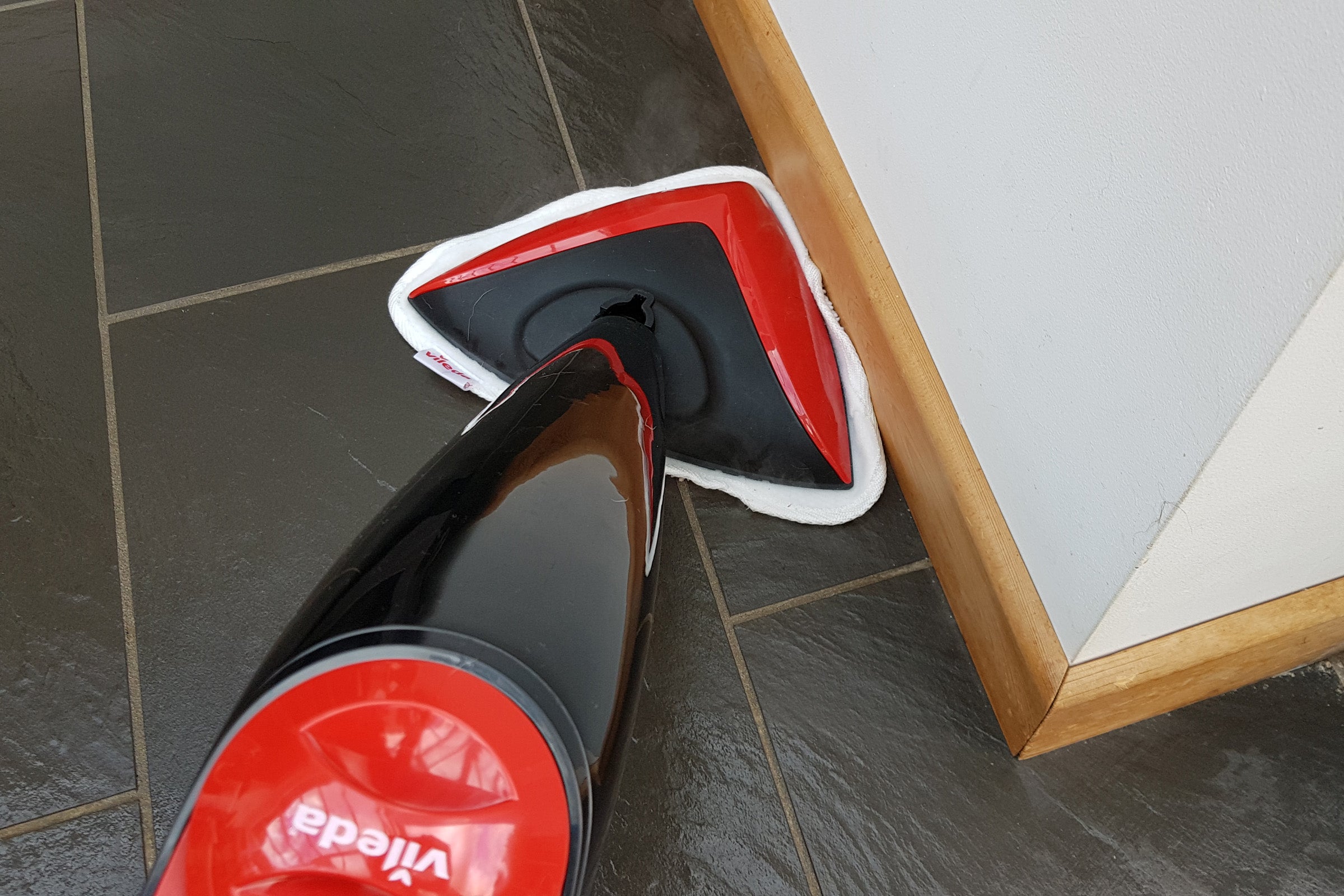 The short cable continued to annoy though. Having already bashed the plug into my knees while carrying the machine and proving too short to clean much without swapping plug sockets, there was a usability niggle too. The cable emerges from the middle/back of the Vileda’s body, and there is no clip up the handle to secure it when in use. You have to physically hold the cable to stop it getting in your way when cleaning. 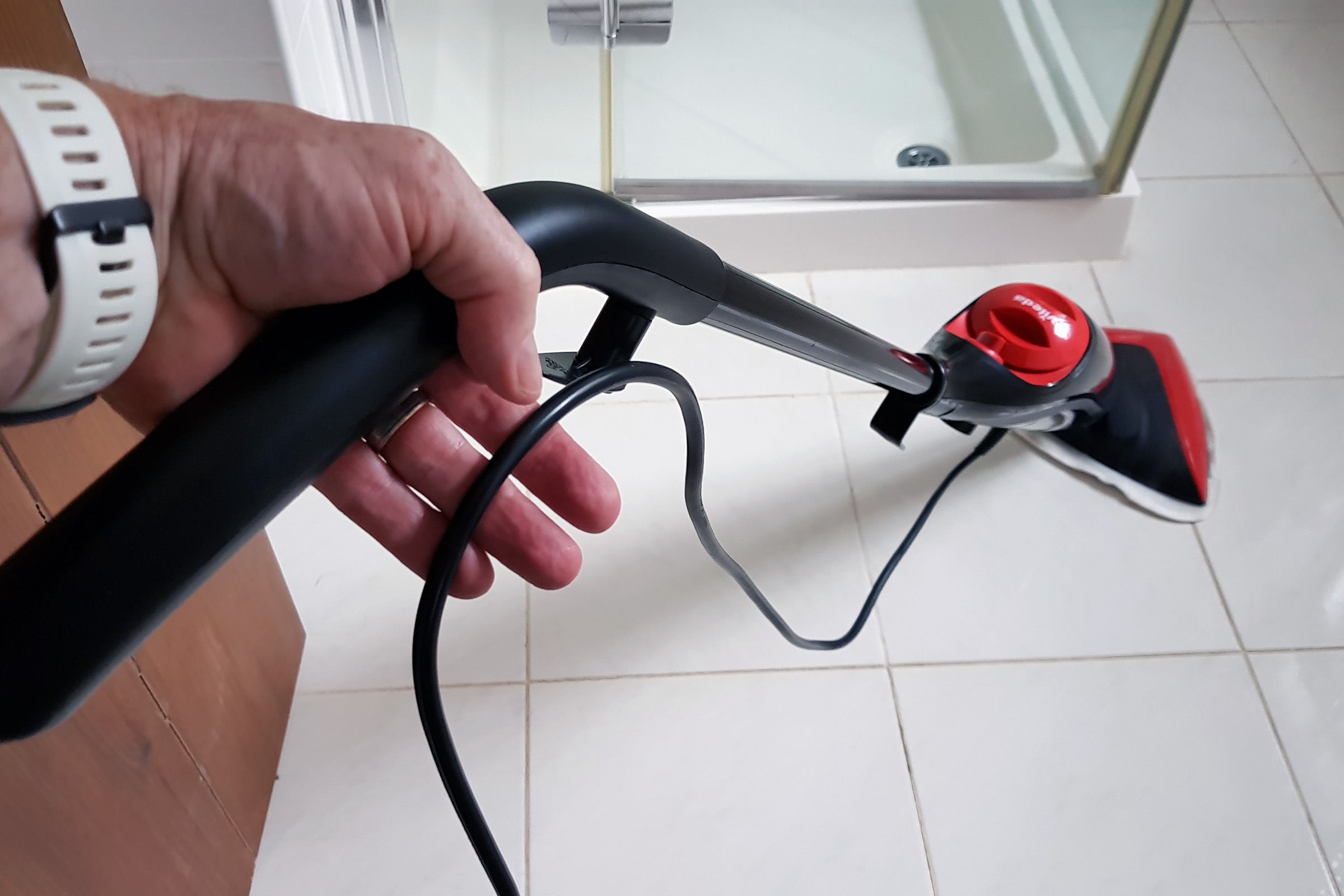 For riven tiles and more textured surfaces, the Vileda works best upwards of its mid power setting. Steam production is very good, although the range between minimum and maximum settings is not that marked. It glided very nicely over the tiles, and the floorhead’s pivoting neck made it easy to turn into corners. 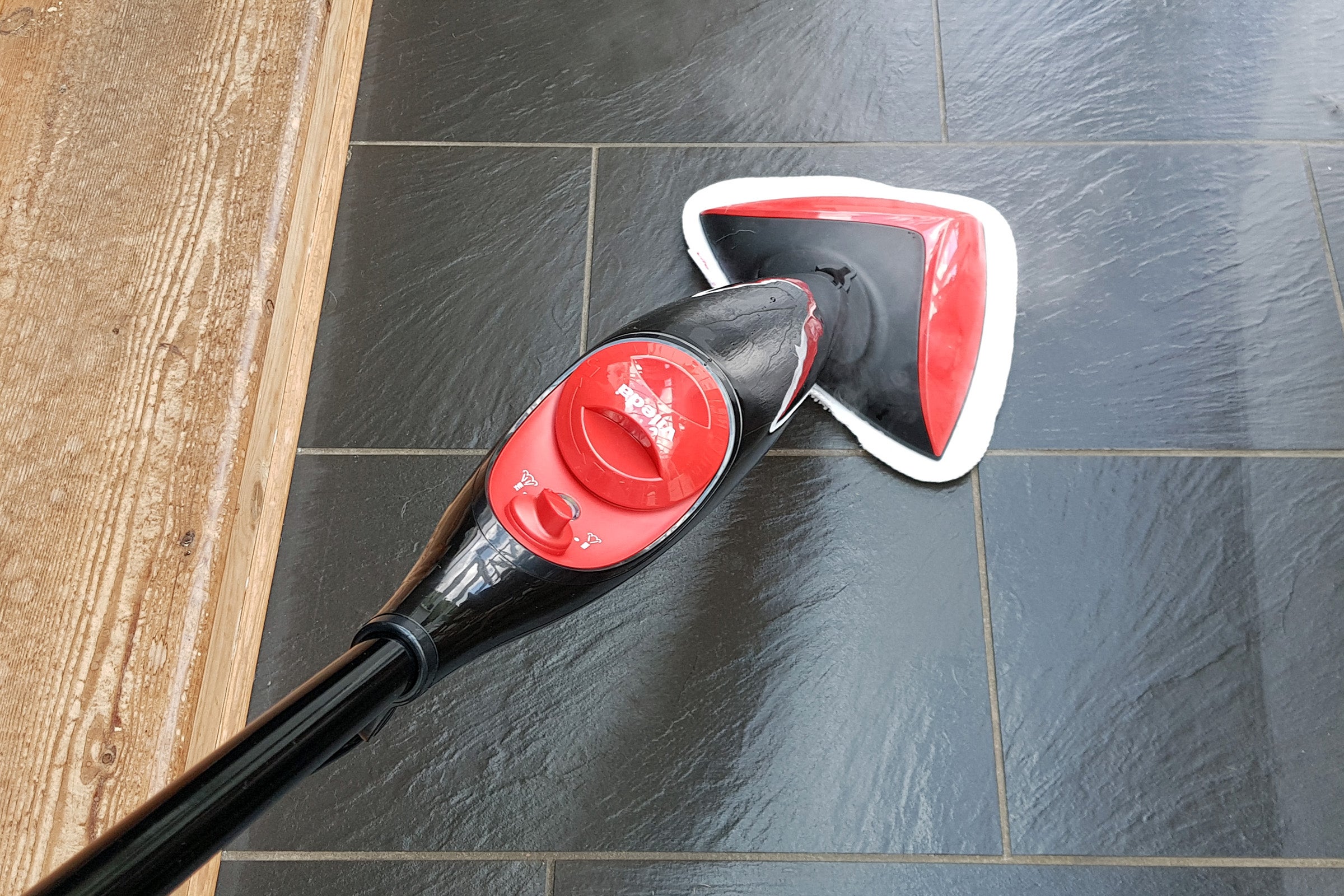 The significant overhang of the mop pad showed an unexpected advantage too. The excess material folds up as you push into the skirting, allowing you to get very close to the room edge. There is no danger of the floorhead’s hard plastic edges scuffing up skirting paint and cleaning goes right to the perimeter with ease. 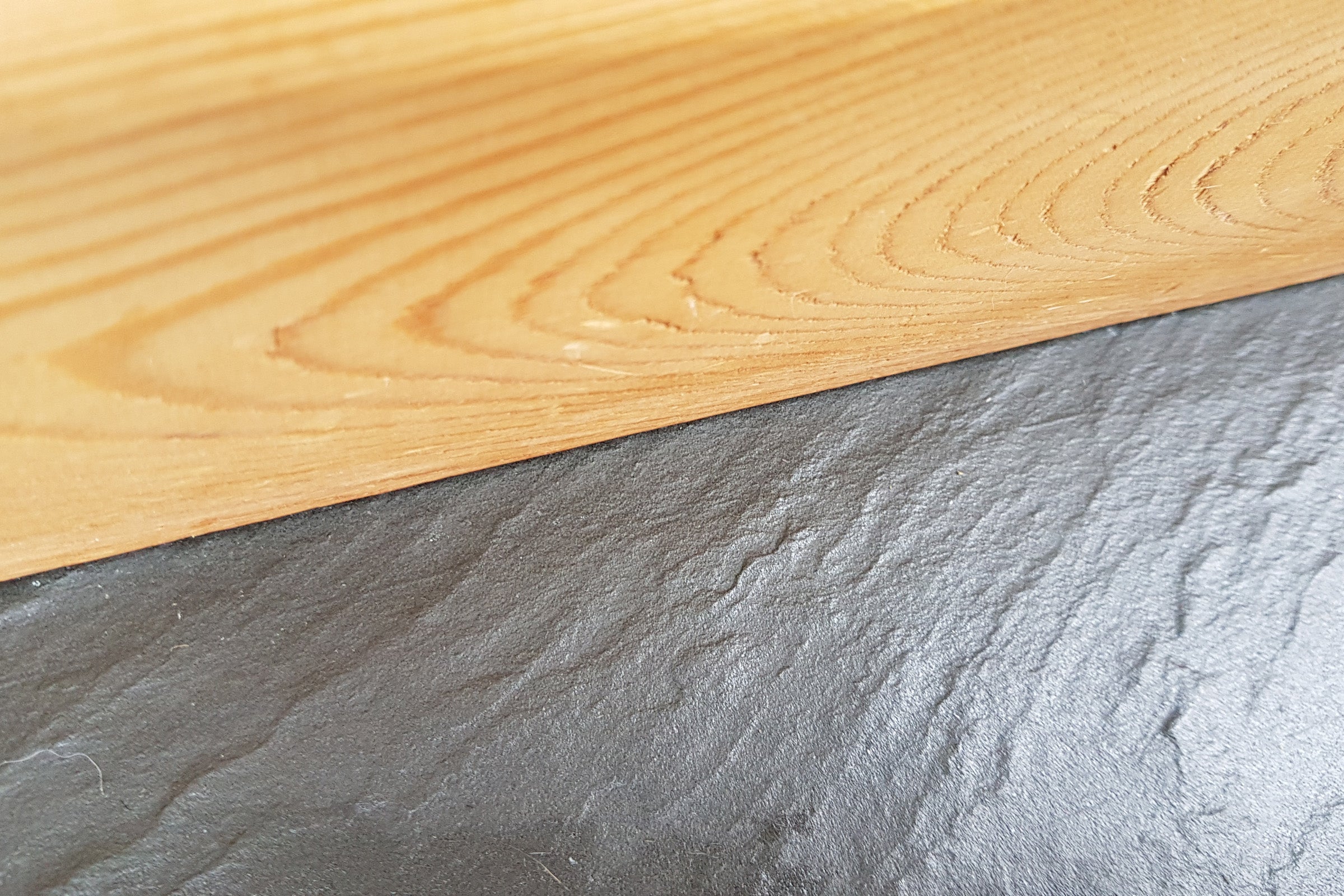 Given a tough test of spilt coffee and a muddy boot stain, the Vileda Steam wasn’t remotely phased. 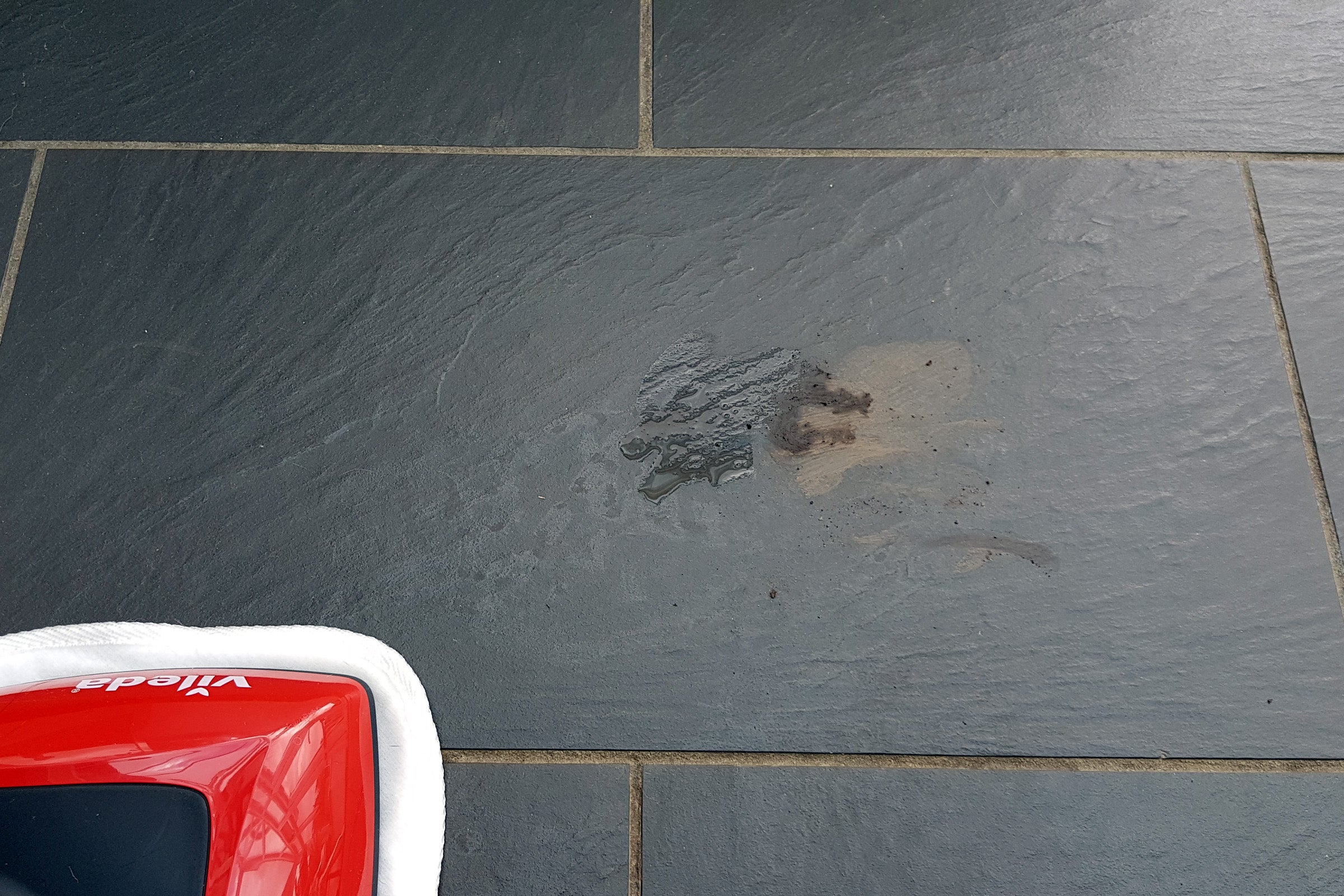 We went over the area twice on the highest steam setting, which delivered great results. Both stains were removed completely, and the resulting finish was top-notch, with no smearing or watermarks. 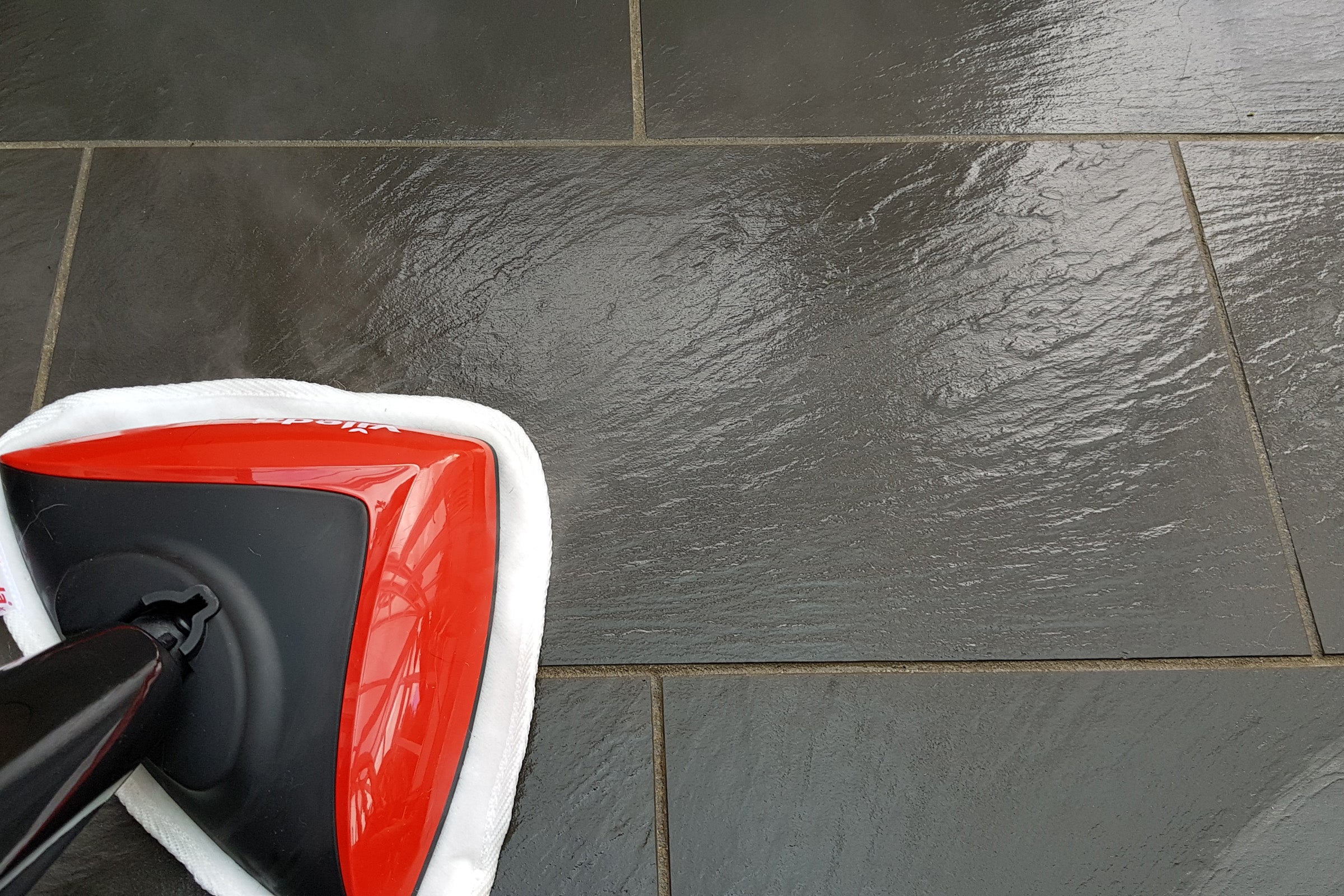 Moving onto our test carpet, the slightly insecure carpet glider actually stayed on most of the time when in use. Only picking the machine up and roughly manhandling it caused the glider to fall off. We suspect that propensity may get worse as the clips loosen over time. We maxed out the steam power to drive the cleaning vapour into the carpet pile and moved at a much slower pace than we would on hard floors. 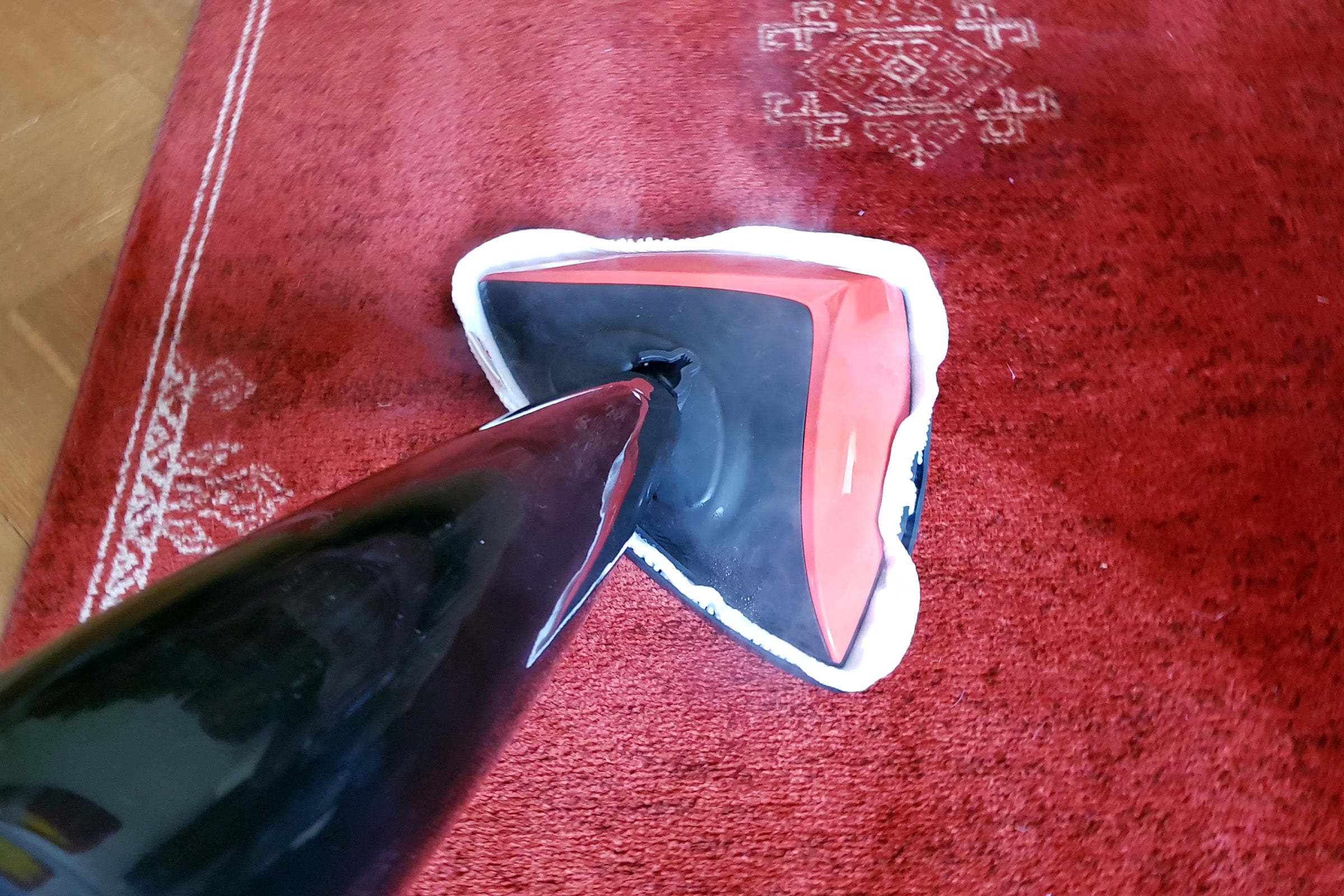 On the main rug in the living room, where our dogs sit most evenings, there was a fair bit more resistance to moving that we had experienced on hard floors. The heavy pile seemed to grip onto the Vileda’s microfibre cloth. Moving slowly, steam was clearly getting deep into the pile though, as the odour of ‘damp and steamy dog’ was clearly evident.

After covering the rug, flipping the machine over revealed a fair bit of grime from the pile. 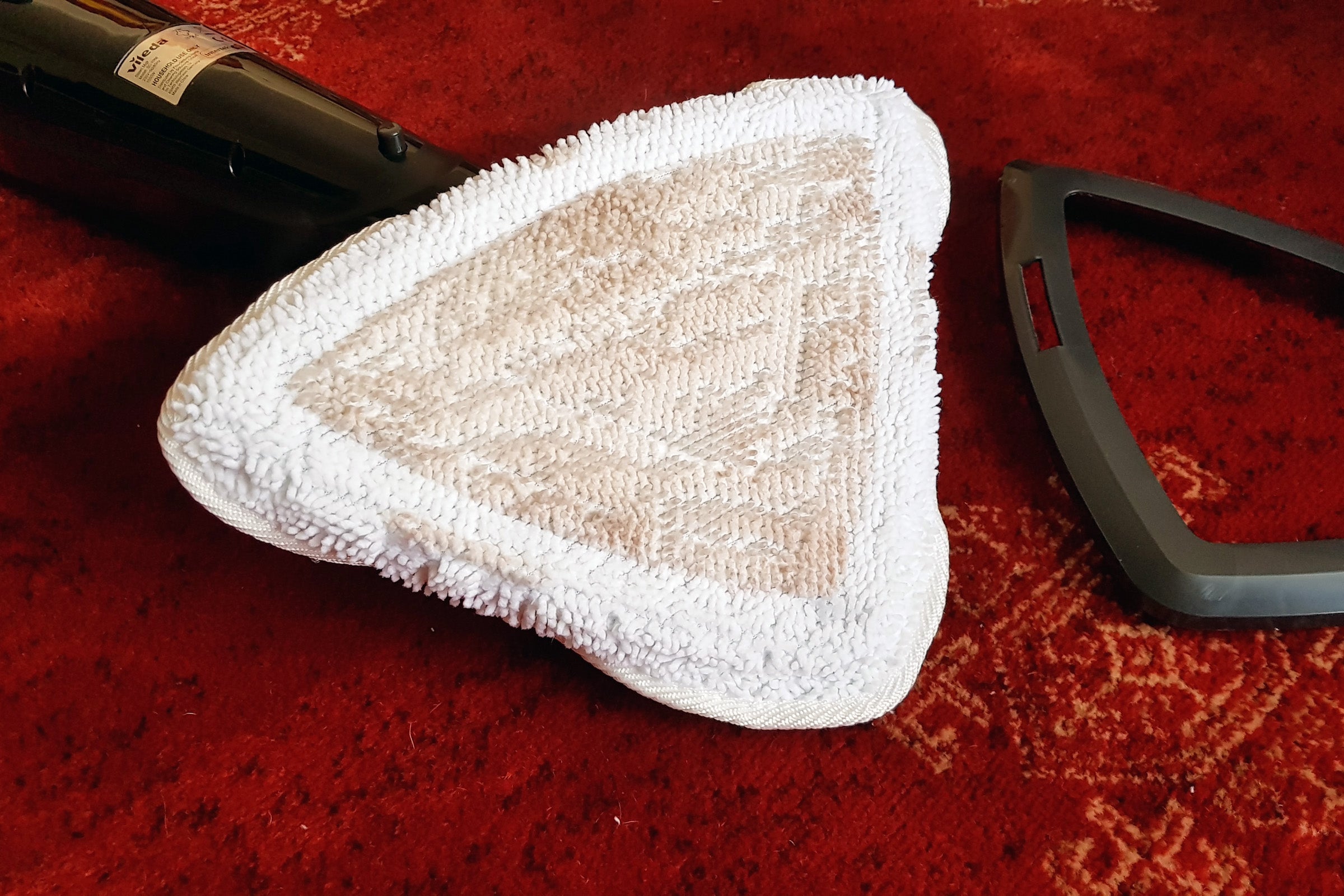 We did note however that the mop pad had shed a few lint pills of its own fibre. The manifested as small white flecks of material on the carpet that we had to vacuum up afterwards. It wasn’t obviously degrading the mop pad but do budget for regular pad replacement if you are aggressively steaming carpets. 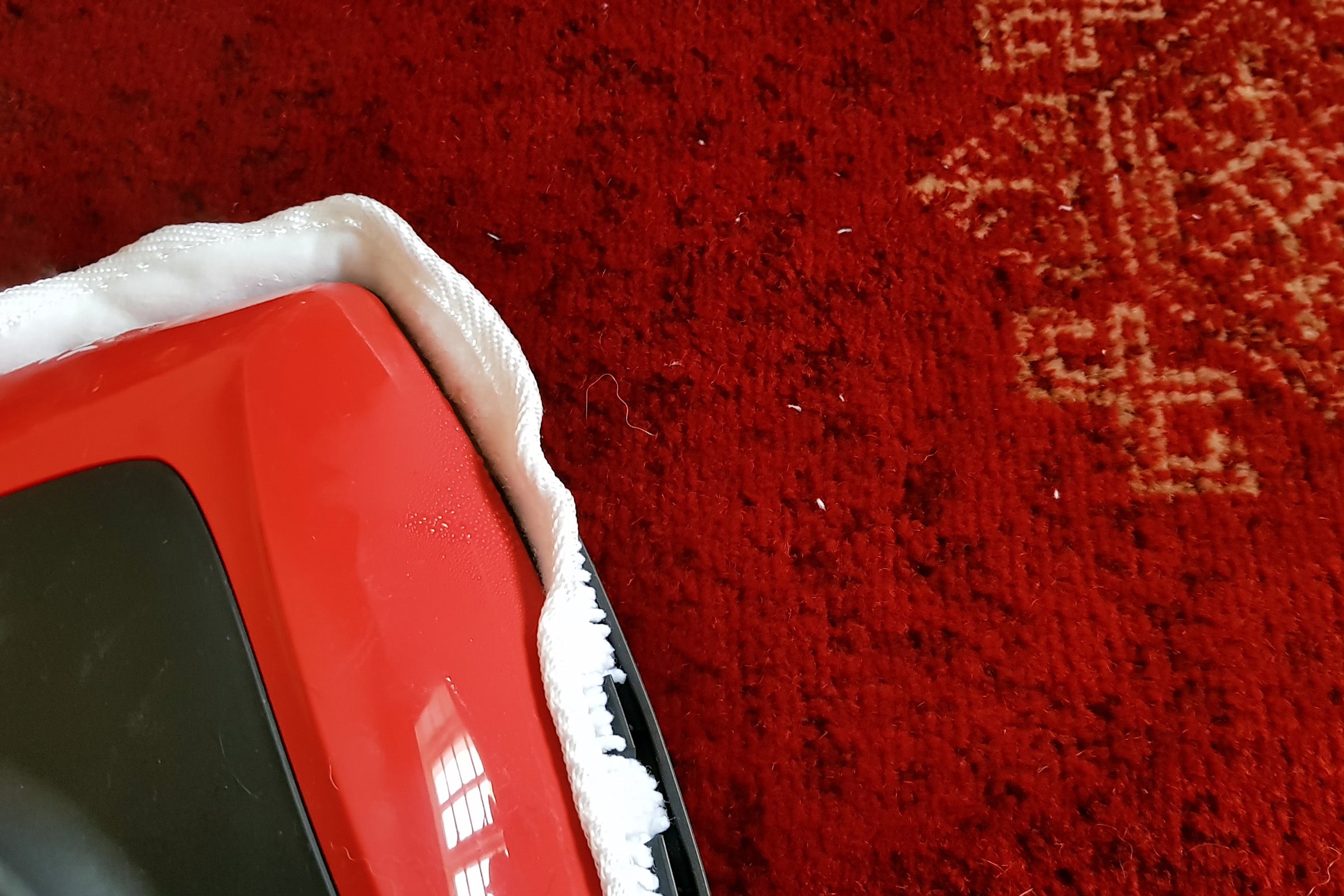 The Vileda steam is undoubtedly a serious and very effective stem mop but one final note of operational caution. The Steam’s body, from about halfway down, gets very toasty hot when you have been cleaning for a while. It’s not enough to burn, but you will certainly know about it if you grab that section of the appliance after a long steam session. 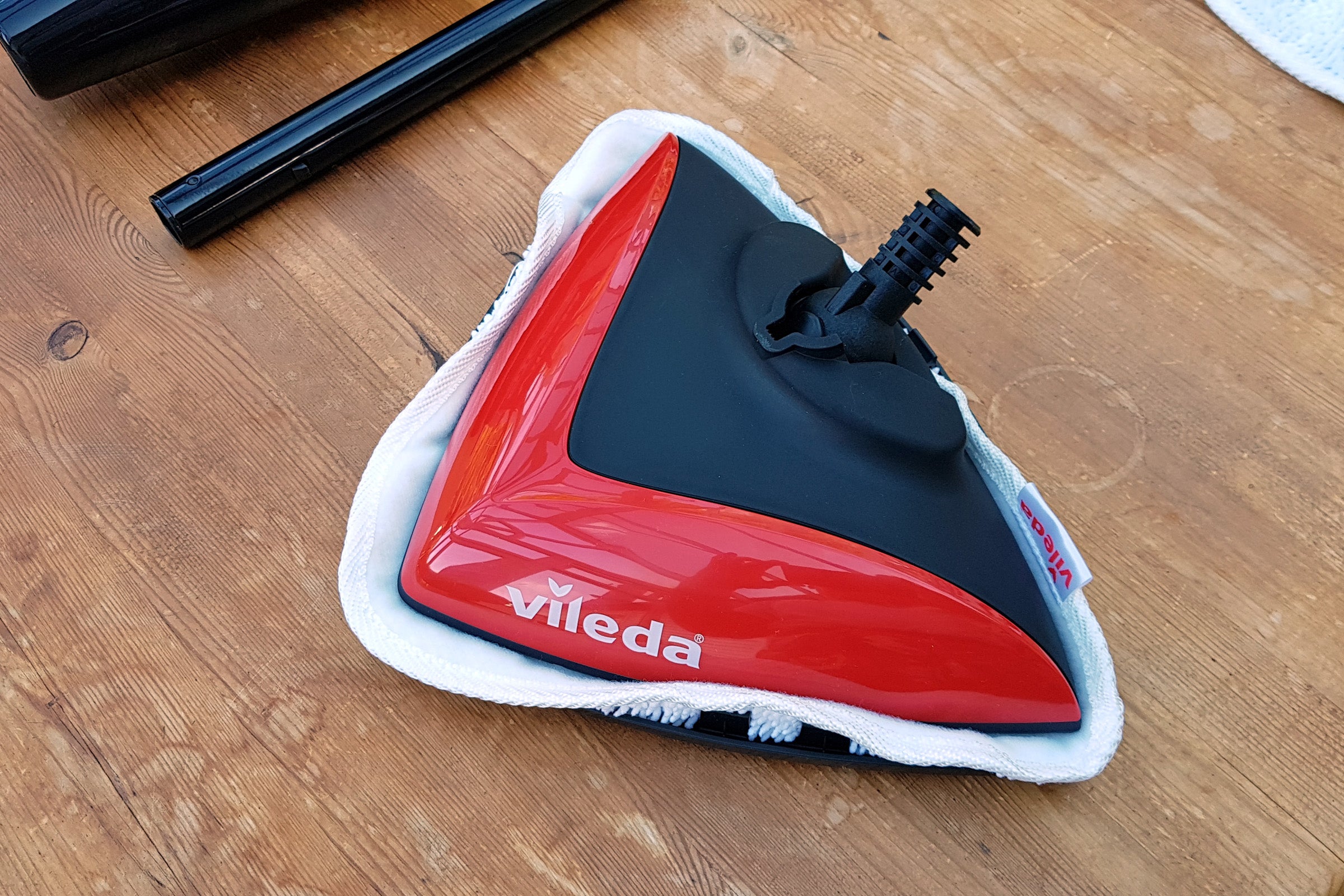 Should you buy the Vileda Steam Mop?

In cleaning performance alone, Vileda’s long-standing mop experience shines through. The steam cuts through grime on a variety of hard floors and delivers a buffed, smear-free finish is very quick time. The floorhead shape, articulating neck and oversize pads all help make cleaning more efficient. Yet it is not without caveats.

The cable really lets the side down, being too short and lacking any clips to secure it in use or when stored. Further gripes include the half-size filler jug, not so variable ‘variable steam’, the loose carpet glider frame and the main body getting very hot in use. The lack of an automatic switch off when the machine is temporarily parked upright is perhaps more of a concern. It is almost certainly going to affect sealed or waxed surfaces and, as sure as eggs are eggs, you will eventually forget to turn it off manually when you park it to shift some furniture. Get used to the Vileda’s quirks, however, and it delivers properly top-notch steam mopping performance.