This is ViewSonic’s attempt to produce a hardcore monitor for gaming, and it tries to tick every box that you’d expect. There’s no denying the ViewSonic’s feature list: it’s a 4K panel with AMD FreeSync, it’s littered with gaming modes, and it boasts tremendous image quality.

There’s ample appeal to the ViewSonic’s key specs. The 3,840 x 2,160 native resolution across a 27in diagonal delivers an enviable pixel density of 163ppi. That’s sharp enough to deliver stunning detail, but it’s also so dense that you’ll need to use Windows settings to increase the size of text and icons.

Scaling works well with some of Windows’ features – icons, text and graphics all look crisp – but some third-party applications still aren’t comfortable with scaling options. That means that the odd bit of software will look tiny or blurry, or may leave broken bits of page furniture.

It’s the same density level as the Asus ROG Swift PG27AQ. That key rival doesn’t just share the same resolution and screen size as the ViewSonic – there’s barely any difference between the two at first glance. 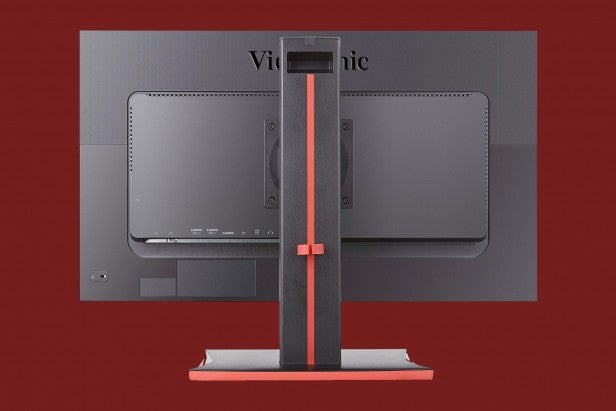 The ViewSonic’s key gaming feature is AMD FreeSync. This technology synchronises graphics card output with monitor refresh rate to ensure that games run smoothly, and it works extremely well: games run with butter-smooth framerates and without juddering or tearing.

The only way to really evaluate syncing features is to watch gameplay alongside a screen that doesn’t have one of the market’s two options – but once you’ve observed such smooth playback it’s thard to go back.

The ViewSonic’s FreeSync is countered by the Asus, which includes Nvidia G-Sync. Both features function in the same way, but I prefer AMD’s hardware. FreeSync is an open, free standard that’s already used by AMD, Intel and several other companies, while Nvidia’s G-Sync remains proprietary – it costs monitor manufacturers extra cash to use it, and it only works with Nvidia graphics cards.

Essentially, if sync tech matters to you, you’ll have to commit to one brand or the other to get a good experience.

Both monitors use these syncing features at refresh rates of 60Hz, which means they can output butter-smooth gameplay at 60fps or below.

Both monitors also use IPS screens. That’s the favourite technology among high-end gaming panels right now, and it’s easy to see why: great colour accuracy and viewing angles are a hallmark of these monitors, and both are also likely to have good contrast.

The ViewSonic has a cable-tidying loop, four USB 3 ports, an audio jack and plenty of display outputs: three HDMI 2.0 connectors, a DisplayPort jack and a mini-DisplayPort plug.

That’s only a couple more ports than the Asus, and that’s not the only area where the two panels cross paths. Both have screen modes designed for different genres of game, and both are proper 10-bit screens capable of displaying more than a billion colours. They’ve also each got pairs of 2W speakers. 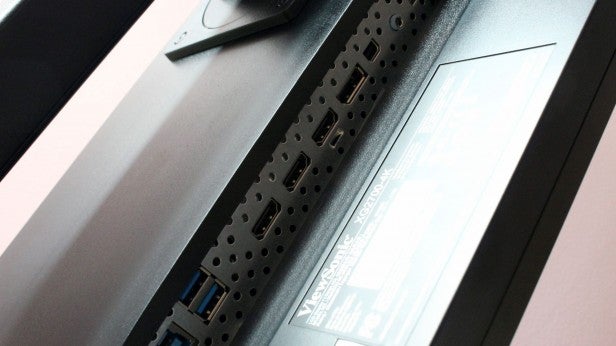 There are only minor practical differences. The ViewSonic has a headphone hook while the Asus doesn’t, while the Asus fights back with crosshair, timer and FPS counter overlays.

The ViewSonic loses out on the scales and in design. Its 8.4kg heft is more than a kilogram more than the Asus, and it’s just not as slick-looking. Its matte black plastic is plain aside from a few red accents, and its bezels are noticeably thicker than those on the Asus.

The ViewSonic comes with its stand already attached, and the base screws in easiliy enough. Once that’s done, though, the XG2700-4K diverges from its main rival – this panel has touch-sensitive buttons on the front of its bezel, while the Asus deploys a rear-mounted row of physical buttons and a small joystick, which is much easier to use.

The menu looks basic and is a little slow to navigate, but it’s packed with options. Hotkeys switch between display inputs and user-defined screen modes, and the main menu has loads of options, from view modes and multi-picture settings to advanced options like input lag alterations and black stabilisation.

ViewSonic’s screen impresses with its versatility. There’s 120mm of height adjustment, swivel and tilt options and a portrait mode position – and it’s compatible with VESA mounts. That’s the same set of options as the Asus.