Like televisions, the marketing blurb for computer monitors is frequently full of red herrings. The Viewsonic VX2453mh-LED claims to offer a frankly ridiculous 30,000,000:1 contrast ratio, which should give it blacks darker than the charred heart of Satan himself. Retailing for well under £200, we don’t think this budget 24in 1080p monitor will quite reach such deliciously demonic depths, but the truth isn’t too bad either.

The Viewsonic VX2453mh-LED is a budget monitor with a TN-type panel, common to the vast majority of affordable computer screens. Its connectivity and design are good for the price though. 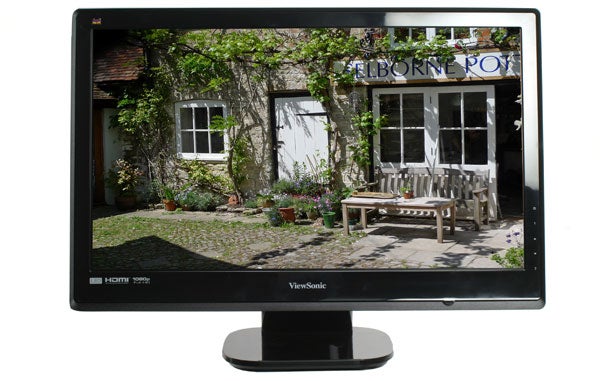 Happy to double-up as a display for your Xbox 360 or PS3 as well as a computer, there are two HDMI sockets on its back as well as a good old VGA connector. The front is glossy black plastic, surrounded by a non-glossy plastic border. This simple design is spoilt a little by the conspicuous “LED”, “HDMI”, “1080p” bright white logos, and the similarly bright control markings on the right side of the bezel.

They blast away the learning curve involved in navigating around the monitor’s simple on-screen menu, but make sure that it’s not going to challenge the best from Samsung in the style stakes. 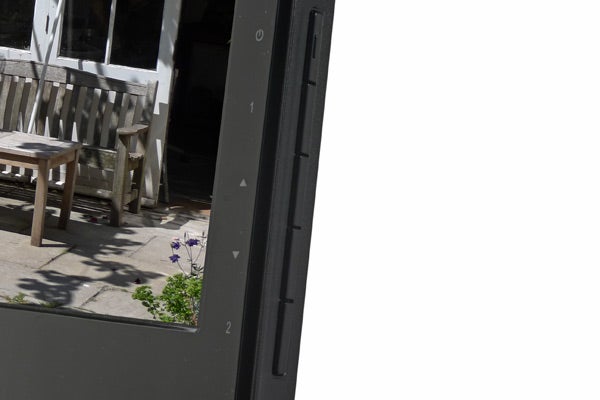 Between the glossy and matt parts is where the speaker outputs live, quietly pumping-out their predictably tiny output. There’s a 3.5mm auxiliary jack input, to let you use your own audio source for the speakers if you wish, but the sound is so weak we can’t imagine many using the internal speakers, apart from emergency situations. Some SRS software is bundled to give the impression of surround sound when using the built-in speakers, but like trying to make a sculpture out of particularly runny chocolate milkshake, it’s a pointless endeavour. The VX2453mh-LED is impressively slim given it still includes speakers though, helped in this respect by the smooth moulded plastic back.

The stand only tilts – you can’t move the monitor up and down – but there’s a reasonable 30-degree forward and back movement. More interesting though is the stand’s secondary arrangement. 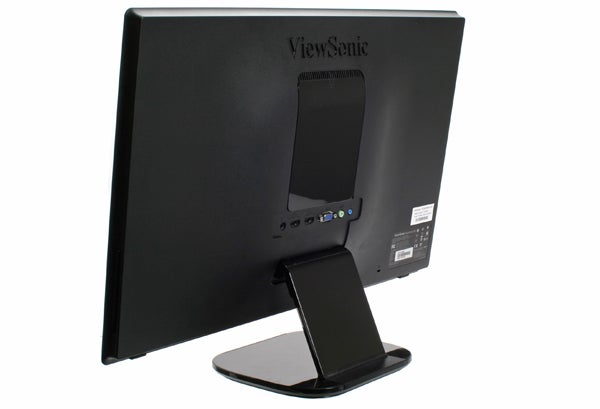 Unscrew the flat base, push the arm away from the monitor panel and the rubberised bottom of this arm lets the VX2453mh-LED sit flush on whatever surface it sits on, like a gigantic photo frame. This orientation will come in handy if you want to use the monitor in somewhere other than the study.

With a claimed 30,000,000:1 contrast ratio and 2ms response time, the Viewsonic VX2453mh-LED should in theory be just about the best-performing monitor we’ve ever seen. It’s not of course, no surprise when it retails for under £150, but it’s not bad.

Typical of a TN-panel, colours are not immensely vivid, but within its own arena, the Viewsonic can certainly stand up to rivals like the Samsung Syncmaster B2430H, but you’ll get better colours from a PVA panel like BenQ’s EW2430. Viewsonic’s claimed contrast ratio is of course nonsense – the actual 1000:1 contrast figure is much closer to the mark. 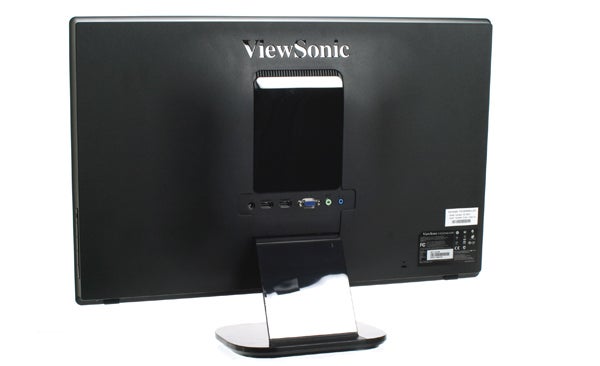 The LED backlight is powerful, and mostly even. There’s some slight bleed in the top corners, but this wasn’t visible at all in everyday usage – only when looked-at carefully from within a darkened room.

Viewing angles are good for a TN-panel model too. Horizontal angles are great, the picture still eminently viewable from the claimed 160-degree position. Vertical performance is predictably a little less impressive, with some contrast shift when viewed from below, but again this is to be expected with a panel of this type. In normal usage, viewing angle limitations shouldn’t encroach on your viewing.

The Viewsonic VX2453mh-LED is designed to play along happily with both computers and consoles, and this is where some potential pitfalls crop up. Within the settings menu, each HDMI has different scaling options for AV equipment and computers. 1080p signals won’t scale properly when using a PC when in the default AV mode, but switch to PC mode and it’ll work perfectly – it just seems a little odd that the default is set to AV here.

When using the sRGB mode, the Viewsonic monitor consumes roughly 19.7w of power, which drops closer to 18.5w when normal brightness and contrast settings are used with the other colour temperatures. Naturally, this figure will go up if you shove up the brightness and turn down the contrast, but it marks this out as a fairly eco-friendly model. 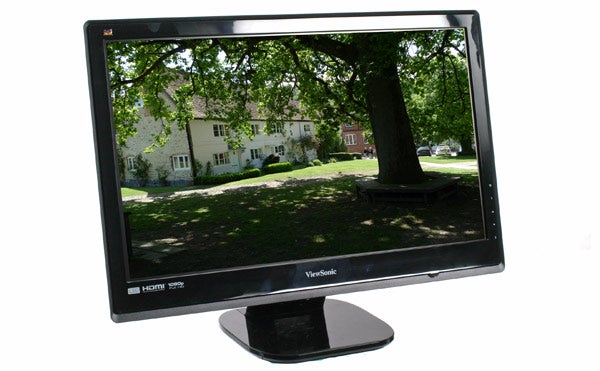 Samsung, Ilyama and BenQ all have attractive 24in models available at this price, but not all of them offer HDMI sockets. This Viewsonic matches other TN models on image quality, and has the bonus of being able to switch to a much less geeky-looking setup thanks to its convertible “book stand” base.

Offering decent image quality at a low price, the Viewsonic VX2453mh-LED enters an aggressive part of the market with an aggressively-specced monitor. The 30,000,000:1 contrast ratio is of course nonsense, but the dual HDMI inputs and a stand that lets it sit flush with a work surface or stand up like a standard computer screen give it a few worthwhile advantages over budget rivals.