One can’t help but feel slightly ambivalent about ViewSonic. In many regards its monitors have a great pedigree, but it has always suffered in the knowledge that the likes of Samsung, Dell and BenQ seem to punch just a little too high for comfort. But, that’s no reason to dismiss ViewSonic out of hand and this 24in LCD has all the raw attributes to be a very good monitor.


As with all monitors of this size it has a 1,920 x 1,200 native resolution, which provides support for 1080p content and allows for two A4 pages to be set side by side at 100 per cent zoom. It uses an 8-bit P-MVA panel, sports a 1,000:1 contrast ratio, claim an 8ms grey-to-grey response time and an excellent 500cd/m2 brightness rating. Connectivity wise there’s an HDCP compliant HDMI port, Component, S-Video, Composite, D-Sub and finally a 3.5mm audio jack for the internal speakers. 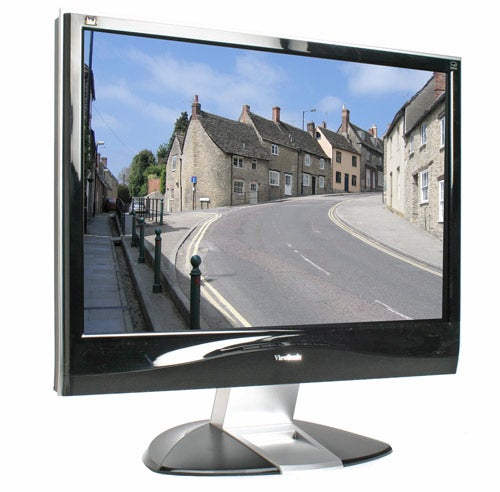 You’ll notice one thing missing in this list, DVI. Thus, in the box the VX2435wm comes with a DVI to HDMI cable for a digital connection. In one sense it’s quite a smart move, HDMI is obviously a smaller connection though the general trend recently has been for monitors of this size to have an HDMI port in addition to the usual DVI and D-Sub ports.


Given that this monitor has been marketed as an all round workhorse, providing connectivity for your PC, Xbox 360, PS3 and whatever else, then the absence of a DVI port is rather curious. How, one might ask, would one connect a PC and a PS3 at the same time? With difficulty would be the answer, or perhaps by using an HDMI switcher box such as the Belkin Pure AV HDMI 3-to-1 or the AV Tool AVT-5941 Four Port HDMI Switcher. Of course, for the extra money spent on a switcher one could just as easily spend more on a monitor with a separate HDMI port, the stupendous BenQ FP241W springs to mind. 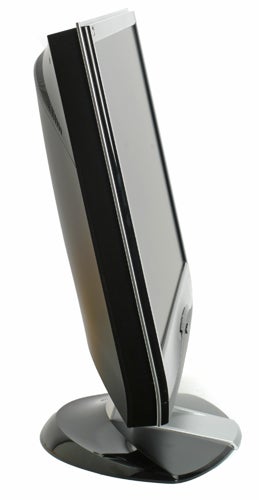 At around £460 online, the VX2435wm is competitively priced compared to the far more expensive BenQ. Moreover, connection considerations aside on paper this a very well specified monitor. Response time is within expectations, but the 500cd/m2 brightness is excellent and while the 1,000:1 Contrast Ratio may not seem astounding it’s a genuine figure and not enhanced by any “Dynamic” processing – the value of which is severely debatable. The lack of any USB hub is little disappointing, but not critically so.

In design, ViewSonic has some history of innovation, as it has demonstrated with its range of ViewDock monitors which incorporate iPod docks. Indeed, though the VX doesn’t have an iPod dock the legacy of the design is still present with the silver central section of the stand. To be frank, this is one of the few aspects of the ViewSonic that looks and feels cheap, which is a shame. 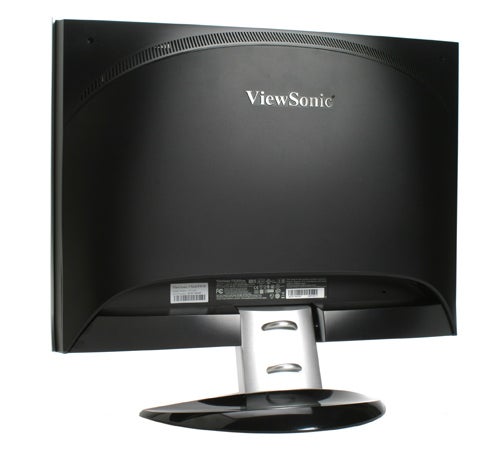 Otherwise, the VX2435wm is a decent, though not stunning, looking monitor. The majority of the display is finished in a glossy piano black, which is okay though it doesn’t come close to the quality of finish found on the Samsung SyncMaster 226BW. If anything, it seems as though ViewSonic is desperately trying to make it look stylish without ever doing anything to deserve such an accolade.


ViewSonic often fits superior in-built speakers compared to its competitors, and the VX2435wm is no exception. That said, that doesn’t make them anything special and though they produce good dialogue, anything more demanding is best avoided.


On the back things really take a turn for the unusual. Whereas the great majority of monitors simply group all the connections horizontally along the back, on the VX2435wm they are grouped vertically either side of the connection housing, which is then covered by a massive plastic backing. The way the connections are arranged makes it possible to feed the cables down easily into the cable tidies on the back of the stand, which is great if you like to keep things neat. 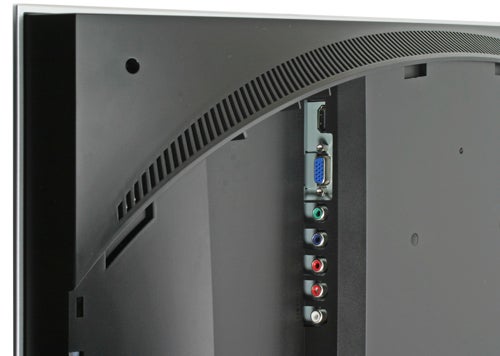 But, there are problems. First, the HDMI port has been placed right in a corner and can be real pain to access. Also, the back panel is exceedingly large, and is awkward to remove. I found subtlety was to be avoided, and giving it a good yank normally provided the desired results. Still, some kind of less violent mechanism would be desirable and would make the whole process of accessing the connections a good deal easier.


The most disappointing aspect of the design, however, is that lack of adjustability. Whereas competitors such as the Dell Ultrasharp 2407WFP feature the whole gamut of rotate, pivot, height and tilt; the VX2435wm only has tilt. For me, this is a real problem especially considering the Dell is now available at almost the exact same price and also has USB ports and a 9-in-2 card reader. Arguably the Dell is also slightly better looking, benefiting from a simpler, less fussy design. In any case at this price the Dell is the natural competitor to this ViewSonic, and in adjustability and features it trumps ViewSonic’s effort.

As with any good monitor the ViewSonic features a good selection of colour configurations, allowing for individual adjustments of Colour, Brightness, Contrast and Colour Warmth with sRGB, 9,300K, 7,500K, 6,500K and 5,400K settings available. There’s also a choice of OptiColor modes, with Standard, Text, Cinema, Game, Portrait, Scenery and Vivid to choose from as well as a choice of Skin Tone settings from Nature, Reddish and Yellowish. 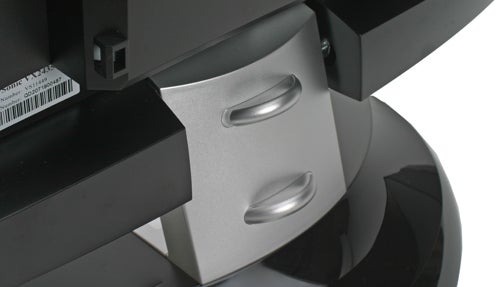 This is a fairly comprehensive list of options and as an added bonus there’s support for 1:1 pixel mapping. However, testing revealed that the monitor only did this accurately over D-Sub and not over Component or HDMI. When outputting 1080p over HDMI or Component with 1:1 pixel mapping enabled, the display added black bars all round the image. Considering 1080p (1,920 x 1,080) shares the same horizontal resolution as the native resolution of this display, there should only be bars at the top and bottom of the display.


Going through the DisplayMate tests the VX2435wm performed very well indeed. Colour reproduction was very impressive, producing good results in the Colour Tracking and Colour Scale tests, particularly in the high and low end of the spectrum. There was some evidence of compression in some of mid-range colours where the difference in tone is very subtle, but nothing very serious.

Where the panel struggled, however, was in the Grey-Scale Compression and White-Level Saturation tests, where the more challenging examples were noticeably compressed. Happily, the Colour Purity and Screen Uniformity tests showed superb consistency across the panel, with no backlight bleeding or shading evident.


Playing back HD content on the VX2435wm is suitably impressive. Visuals are sharp, colourful and action is smooth. The display doesn’t feature any kind of high contrast glossy coating, so black levels aren’t as impressive as on some displays, but they’re still good enough and only a discerning eye will spot the very slight greyness that appears from time to time.

Compared to the Dell Ultrasharp 2407WFP the ViewSonic marginally outperforms it in the image quality stakes but not by an awful lot. It’s marginally brighter, and ever so slightly more vibrant but the Dell does have a faster response time at 6ms grey-to-grey.


In which case there isn’t a great deal between the two, and making a choice is difficult. Though the ViewSonic has marginally better image quality, the Dell trumps it in most other departments providing more features and far superior adjustability. HDMI could be claimed to be advantage in the ViewSonic’s favour, but since its presence is at the expense of a DVI port the difference is negligible – one could after all use a DVI-to-HDMI adapter to the same effect on the Dell, which is also HDCP compliant. 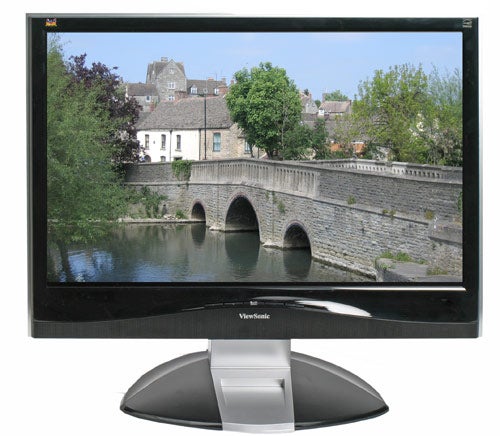 Ultimately, in an ideal world everyone would ignore both those and go for the BenQ FP241W, which is now available for £545. Obviously, if you don’t have that kind of money then you’ll have to go with something else, in which case this or the Dell are probably your best options. Which you go for will depend on your needs, though in my mind the Dell is still a marginally better investment thanks to its superior adjustability.


ViewSonic has done some good things with this 24in display. Most importantly, image quality, though not flawless, is very good, with strong colour reproduction and a bright display. It’s in design however, that it lets itself down, with a disappointing level of stand adjustability that pales in comparison to its competitors.