Of all the various sizes and native resolutions available in the widescreen LCD market, it seems as though the 20 to 22in display is becoming as close to a popular standard as one can get. Obviously the larger displays with 1,920 x 1,200 resolutions, or the even larger 2,560 x 1,600 30in screens, offer more desktop real-estate, but what’s offered by 1,680 x 1,050 models is a nice balance between viewable area, physical size and price.


As such, it’s no great surprise to see that this particular segment of the market is well supplied and highly competitive. We’ve looked at a number of 1,680 x 1,050 displays predominantly featuring either 20in or 22in panels, though one particularly outstanding 21in model, the Samsung 215TW, remains a firm favourite. 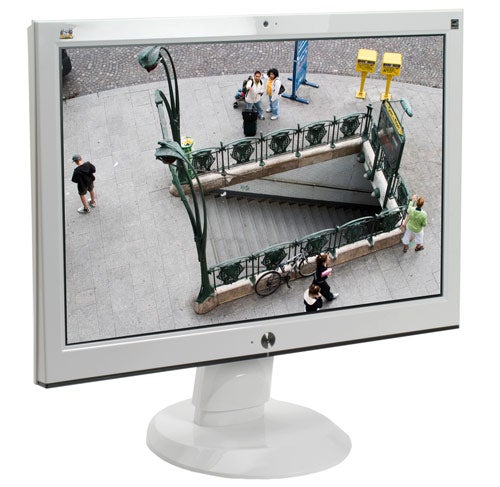 If anything, though, it’s the 22in displays that are the most appealing. Though they offer no more viewing area in real terms, the extra one or two inches of diagonal size is a palpable improvement. The last 22in ViewSonic LCD we looked at was the VG2230wm, which at the time – December 2006 – was a creditable effort. However the market has moved on rapidly since that came out, and ViewSonic has responded by updating its 22in offerings with the VX2255.


Our sample is the piano-key white edition, the VX2255wmh, while there’s also a piano black edition with the ‘wmb’ model suffix. If anything we prefer a black finish, but glossy white isn’t without its appeal and Apple users will certainly appreciate the potential synergy. For its part this ViewSonic isn’t as ornate as the rather overpriced Apple displays, but the design is still attractive. 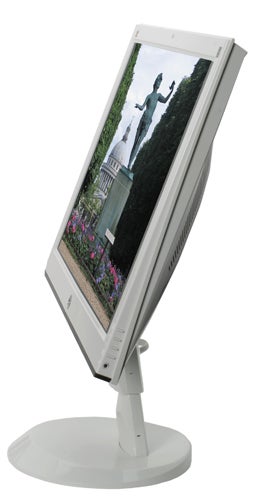 For this model, ViewSonic has done away with front facing speakers, and as such the VX2255wmh is noticeably slimmer and sleeker than other ViewSonic displays. This doesn’t mean there aren’t speakers though, just that they’ve been moved to under the edge. This is no bad thing, especially considering speakers are hardly a key feature for most users and sound quality is predictably poor.


Moving back to the overall design, it’s good to see ViewSonic providing a little more by way of adjustability with this model. The last ViewSonic monitor we looked at, the VX2435wm, lacked significantly in this department, and was a major contributing factor to it not receiving an award. There are no such problems with the VX2255wmh, with 80mm of height adjustment, tilt and 360 degree panning. The panning is particularly nifty, utilising a plate underneath the stand that provides a beautifully smooth and easy to control action.

On the front there’s one large silver power button, with the status light just below set into a black strip. This black strip is quite a nice touch, and provides a little balance to the otherwise entirely white exterior. OSD controls are situated on the outside of the right edge, with icons on the front. The buttons are noticeably more spread out than on older ViewSonic models, and are consequently easier to operate by touch alone.


Another key feature of this display is the inclusion of a 1.3-megapixel camera at the top, while there’s also a built-in microphone to the left of the power button. This makes it ready for video calls, video messaging and Skype, while the inherent adjustability of the display makes it easy to align when using the camera. It’s never going to be a defining feature, but it’s a useful thing to have and tidier than having a web cam hanging off the top of your monitor. The camera itself is of decent enough quality, though there is some minor flicker to be seen. The microphone, however, struggles to pick up speech from a normal seated distance without Mic Boost turned on. As such the audio quality is rather muffled, and for regular video messaging a proper headset would be essential. 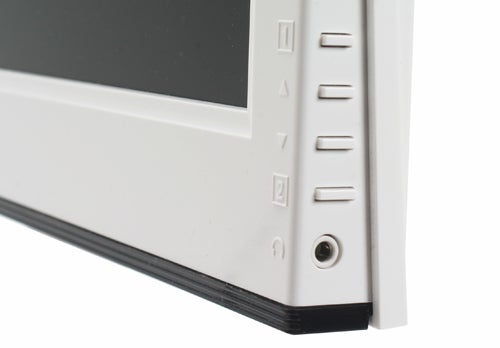 This ViewSonic uses a TN panel, the cheapest of the various LCD technologies used on consumer products. As a general rule these panels boast good response times, but suffer from mediocre viewing angles – and this is the case with the VX2255wmh. A claimed 5ms off-on-off response time will please the box tickers, but colouration suffers at relatively minor angles and brightness drops off considerably beyond 45 degrees.


Other aspects of the panel specification are solid, but hardly outstanding. A quoted 700:1 contrast ratio is fairly average, as is the 280cd/m2 brightness rating. Connection wise things aren’t out of the ordinary either, with D-Sub and an HDCP capable DVI for video, a Line-in for audio and a headphone jack located on the right edge below the OSD control buttons. The audio quality from the headphone jack is pretty decent, though it’s placement on the right is somewhat misguided since the great majority of headphones have wires leading into the left cup. As result when using the headphone jack wires will trail across your keyboard, which is hardly ideal. 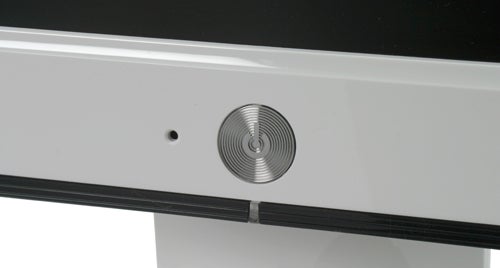 Package contents includes UK and European power cables, a VGA cable, DVI cable, Line-in cable with audio and microphone connections, a USB cable for the camera, Quick Start Guide and monitor drivers on CD. Nothing is missing that ought to be in there, and ViewSonic has been wise enough to make all the cables white to match the monitor. It’s worth noting that out of the box every surface of the glossy plastic finish is protected by clear plastic sheets, which must be removed individually. These obviously protect the monitor very well, but removing them all is rather time consuming and makes setting up the display a bit of a faff – better safe than sorry though.

Upon connecting the VX2255wmh and firing it up, initial impressions were low key. Just in general use it’s clear that this isn’t the most vibrant of displays, with an ever so slightly muted, washed out appearance. At the very least, though, it wasn’t badly calibrated or radioactively bright like the Dell 2707WFP or 3007WFP-HC were. This meant the only real calibration required was adjusting the brightness and contrast to get it just right.

This required entering the OSD, which is best described as functional. ViewSonic doesn’t seem to have updated the basic layout or appearance for a great deal of time and it does look a little dated compared to some. Still, regular ViewSonic customers will appreciate the consistency and it’s not pointlessly showy as some have become.


The full gamut of predefined colour temperatures of 9300k, 7500k, 6500k, 5400k and sRGB are available to select, while you can also adjust the colour as you see fit. Another useful feature of the OSD is a non-native warning, which tells the user when the display is set to a resolution that isn’t its native 1,680 x 1,050. Experienced users need not be concerned, it can be turned off, but for less experienced users it’s a nice touch – the support staff will certainly appreciate it.


Playing HD video content on the VX2255wmh proved a mostly pleasurable affair. Motion was predominantly smooth, with no appreciable ghosting during action scenes. Though by no means outstanding, the image produced was sharp and detailed enough to be pleasant to watch. Considering the price and target market one can’t ask much more than this, and general consumers should enjoy what they see. 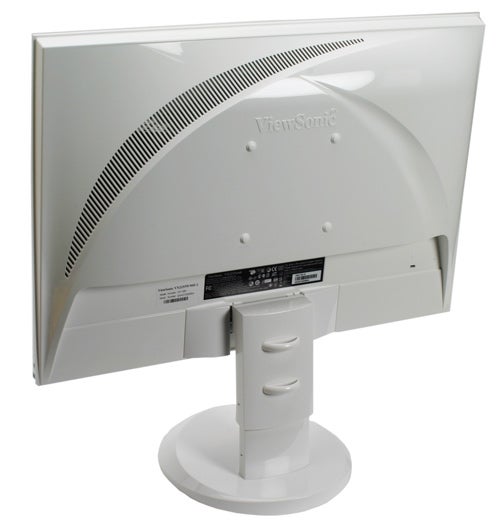 If any specific complaint can be made it must be made of the black levels. Though not terrible, darker scenes tended to be slightly washed out and as such more challenging scenes lacked a little depth and atmosphere.


For gaming we first fired up Trackmania Nations, a fast and colourful racer which is both a good test for gaming performance and an after-hours office favourite. Again, the ViewSonic dealt with the motion very well though it wasn’t the most colourful rendition of the game we’ve ever seen.


For a more sinister gaming experience Quake 4 was the way to go. It’s hardly a classic, but its dark environments are another good test of a monitor’s abilities. In this case performance was sufficient, though uninspiring. The darkness of the environments was fairly well conveyed, but as with the HD video content there’s a distinct lack of depth and detail and the immersion suffers for it.

Next up were the DisplayMate monitor tests, which are always a thorough workout for a monitor and a great indicator of quality. In the Dark-Grey Scale the lack of sufficient contrast was very evident, with some quite severe compression on the darker end of the scale. A yellowish tint also appeared in mid-range shades, though this can sometimes be evened out. However, the White-Level saturation test also demonstrated a problem with grey colour tinting, with some of the lighter shades showing evidence of a blue tint – especially when in the sRGB colour mode. The brighter ends of the spectrum were predictably compressed, though not to the same extent as in the Dark-Grey Scale.


More worrying were the Colour Purity and Uniformity tests, which showed a distinct lack of consistency across the display. The extreme edges were noticeably shaded, while Dark Screen showed obvious backlight bleeding from the top and bottom of screen – particularly to the right of centre at the bottom. 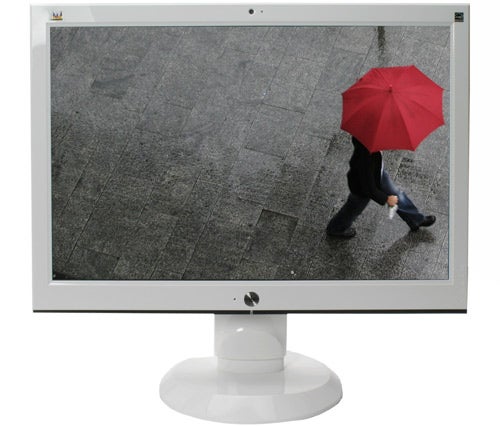 Happily, the Colour Scales test was far more pleasing. The VX2255wmh still isn’t the most vibrant, but it produced the whole scale very well with good drop off at both ends of the scale and no discernible compression. This may make the ViewSonic a good choice for the amateur graphic artist who wants decent colour accuracy, but who can’t afford the excessively pricey professional panels such as the 26in NEC MultiSync Benny looked at back in April.


That said, even if this were the scenario the ViewSonic isn’t the best choice you can make. At this resolution – and we make no apology for harping on about this – Samsung’s 215TW is still the best deal by some margin. Although it’s an inch smaller than this ViewSonic, it’s not that noticeable and what you get is a monitor with superb image quality, superior viewing angles and colour accuracy, extensive adjustability and superb connectivity. Moreover, having been prohibitively expensive for a long time – for the record I bought it in January and it cost £370 – it’s now available for only £228, the same price as this display.


Ultimately, the Samsung 215TW once again overshadows a 22in display, and even if that weren’t the case, the VX2255wmh still isn’t the best 22in out there. Samsung’s 226BW trumps it in both attractiveness and image quality, while the HP w2207 which we’ll be reviewing shortly sports an even better design. It’s unfortunate for ViewSonic too because this isn’t a bad display, it’s just not as good as some of the competition at this price point.