LED backlighting is gaining ever more traction in the display market, and ViewSonic has provided us with yet another contender, the 21.5in VX2250wm. This affordable TN-based monitor offers dual inputs, a slim profile, integrated speakers and a (by now standard at this size) Full HD/1080p resolution, not to mention a ludicrous 10,000,000:1 claimed dynamic contrast ratio. Let’s see how it holds up. 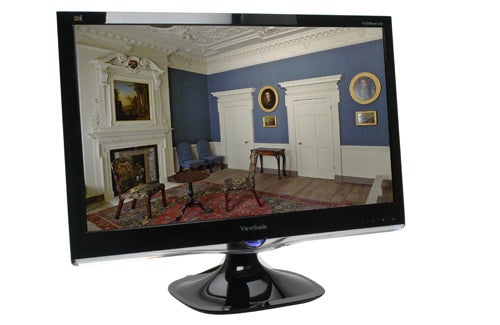 As usual with budget monitors, the VX2250wm comes in two parts which are easy to assemble: just place the base on a desk and click the monitor and stand into it, secure a thumb-screw and you’re done. As you might already have guessed adjustability is limited to tilt, but again that’s par for the course.


The monitor sports VGA, DVI and 3.5mm audio connections (the latter feeding its integrated speakers), which are facing downwards so they’re not the easiest to access, but at least ViewSonic provides cables for all of them. Some might bemoan the lack of HDMI, but you can hook up HDMI cables to DVI with a cheap and simple adapter, and adding the extra digital input would have hiked this monitor’s price up.

There’s no power brick to worry about either as the VX2250wm’s transformer is integrated into its chassis, meaning it takes a standard kettle lead. Build quality is decent enough though it’s not the best we’ve come across, with the occasional bit of creaking here and there. At a mere 3.5kg, it’s quite light though.


When it comes to design the VX2250wm is reasonably attractive. Despite its potential for high maintenance, we really like the high-gloss black finish, especially when combined with its subtly tapered bezel and slim edges. This is all offset by a transparent strip at the base, which works well but is ruined somewhat by the awkward-looking power button. A transparent blue-backlit affair with a sharp chrome trim, we can’t quite put our finger on why it doesn’t work, but the somewhat clunky stand certainly doesn’t help. 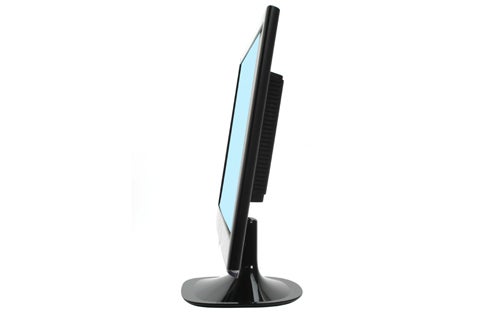 Overall, we’d say the likes of the BenQ V2220 easily beat this ViewSonic in the design stakes, but it’s still a decent-looking display. However, being a practical lot we’ll always prefer the more durable matt finish exhibited by the Samsung SyncMaster BX2240 and BenQ V2410T.

Aside from its physical power button the VX2250wm’s controls are all touch-based and marked rather blatantly on the front of the bezel, though at least this makes them easy to see. Thankfully, the four touch-controls are well-spaced, logical and very responsive indeed, with the lightest contact registering instantly. The first ‘button’ calls up the OSD and exits menus, while the second selects and doubles as input switcher. The up and down ‘buttons’ call up the volume and brightness/contrast menus respectively. 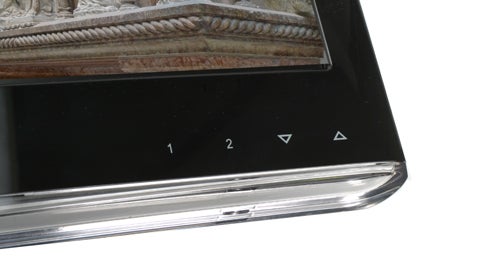 ViewSonic’s slightly dull OSD is at least easy and reasonably intuitive to use, though it could really have done with a splash of colour to relieve its three-tone blue, white and black livery. All the basic adjustments are present, including an sRGB mode, various colour temperatures, the option to turn dynamic contrast on or off and an ECO mode.


However, it’s not nearly as extensive a selection as found on some rivals, with the main caveat being its lack of picture mode presets. To some users this could be a blessing in disguise as such modes tend to be poorly configured by default, but if configured properly they can become very useful.


Being LED backlit helps the VX2250wm to be very frugal. After calibration it averaged 15W in normal usage and with Dynamic Contrast activated maxed out at 19.1W. Activating its Eco Mode, meanwhile, resulted in an impressive maximum power consumption of 13W. 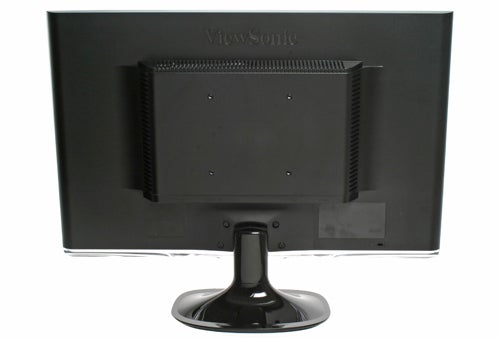 We rarely get good performance from integrated monitor speakers, but the 2W stereo speakers in this ViewSonic put on a surprisingly impressive show. That’s not to say they can match even a budget pair of standalones or the integrated efforts of an all-in-one such as the MSI Wind Top AE2220 Hi-Fi, but for a display this thin and light they produce some half-way decent bass and a high volume level. This means the action in films comes across with adequate oomph, though a slight muddiness across the range means you’re still better off using external speakers or headphones.

Naturally the most important element of any monitor is its image quality, so let’s see how the ViewSonic VX2250wm does. It’s based on TN-panel technology, sports a fairly average response time of 5ms, a Full HD (1,920 x 1,080) resolution and – thanks to a its LED backlighting – a claimed dynamic contrast ratio of 10,000,000:1, with a more realistic native figure of 1,000:1. Admittedly, perceived contrast is aided by a dynamic contrast system that actually works well enough that we would recommend turning it on for entertainment material, but it’s still a whole continent away from the ludicrous dynamic figure. 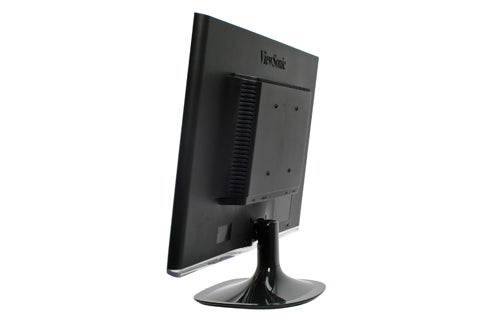 Oddly enough, the VX2250wm’s major image strengths are also its primary weaknesses. To clarify this with examples, it offers more dark detailing than we would usually expect from a TN-based display, occasionally revealing subtleties that some competitors can’t in films and games (which generally tend to emphasise dark tones). However, it does so at the cost of whites becoming greyer than we’re used to.


Another example is viewing angles, which are simply superb horizontally and from above. The latter is especially surprising for a TN panel, which normally suffers from sharp contrast and colour shift if viewed from above a narrow ideal angle. Conversely, the VX2250wm’s performance in this regard when looking from even slightly below is very poor indeed. To get the best out of it your line of sight needs to be positioned higher than is really ideal, but unless you stack magazines under your monitor that’s likely to be the case anyway. 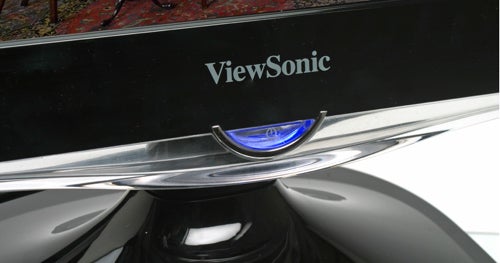 Ultimately, in both examples the benefits far outweigh the disadvantages. Combine this with decent sharpness, no sign of backlight bleed and minimal banding only noticeable across green shades, and you have a pretty good performer. The only other factor is pixel shimmer due to badly regulated voltages, but while unusual even on a budget display, this is not an issue most users will come across often.


Overall then, how does the ViewSonic VX2250wm hold up to the competition? At £160-odd, it’s in the same price bracket as the BenQ V2410T, which not only offers 24 inches of screen real-estate but also a rugged matt finish and, most importantly, full adjustability including height, tilt, swivel and pivot. Admittedly its image quality is inferior, but either screen will do fine for daily use and productivity. 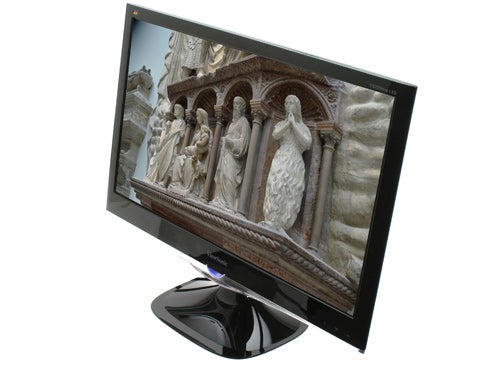 Only when games and films are thrown into the mix does the VX2250wm offer a real advantage, though if you can afford another £40 you can get the Samsung SyncMaster F2380 (the bigger, Full HD cousin of the award-winning F2080), which will beat it in every regard except frugality. However, if your budget is limited and integrated speakers are something you’re after this might just be the monitor for you.


Despite its foibles, the VX2250wm offers a few select image quality highlights that few budget LED-backlit monitors can match and speakers that tend toward decent. However, ViewSonic has priced its latest 21.5-incher a bit too high compared to some of the better-featured (albeit speaker-less) competition for it to win our hearts.