19in widescreen monitors, it would seem, have recently become something of an endangered species. Of course this is hardly surprising, considering that for the space or budget constrained, the 20in form factor offered a much higher resolution of 1,680 x 1,050 over the standard 19in 1,440 x 900 while only adding one inch.


At the beginning of this year, however, ViewSonic changed the rules of the game by introducing the VX1940w, a 19in monitor sporting a 1,680 x 1,050 panel. Since then, other big names like Iiyama and Asus have also gotten in on the higher resolution 19in gig, and the VX1940w was starting to look a little long in the tooth. And it’s that fact which brings us to the new ViewSonic VX1962wm ‘ Super HD’ monitor.


Apart from updating the marketing to include that ambiguous Super HD moniker, ViewSonic has also doubled the contrast ratio from the previous model’s 3000:1, added SRS stereo speakers, and most importantly, given the display a major redesign. 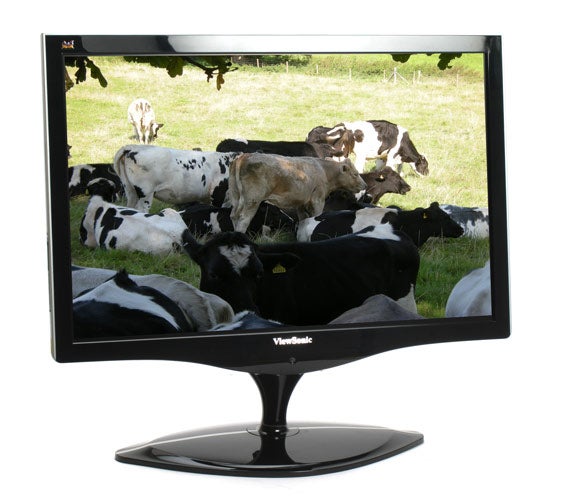 The VX1962wm comes in two parts, which slot in really easily once you get the hang of it. We found the best way was putting the base on your desk and then popping the monitor’s leg into it. Finally, you need to tighten a screw, though thanks to a handy clip you don’t need any tools.


From the moment I took the base from the box, its surprising weight (thanks to metal combined with very thick plastic) gave it a sense of solidity that few monitors below £150 can match. And though the rest of the display doesn’t feel quite as solid, overall build quality is certainly nothing to complain about. Despite the base, overall weight is kept to a minumum, and this is a monitor you can easily move about with one hand.

Its incredibly sleek and streamlined design also means it looks better than most monitors – in fact, its chassis is by far the smallest (looking) I’ve come across since the days of 15in LCDs.


The entire screen is finished in glossy piano black, with a silver trim around the top and sides of the slim bezel making it seem even thinner. There’s also a grey line bisecting the base and monitor’s leg, which doesn’t really add much to the design, and would have looked far better if it had matched the bezel’s silver trim.


Aside from this one niggle, the visual design of the VX1962wm is very attractive. The base is a tapered oval shape, which in combination with the stripe reminds me of an American football, while the stand’s leg is an incredibly slim rounded column.

You might already have guessed that there is little adjustability available here, with only tilt on the menu. But we won’t criticise ViewSonic too much for this, since it’s common at this price point and screen size.


The screen’s chassis, meanwhile, is shallow and smoothly curved, and VESA mounting holes at the rear are covered with discrete rubber plugs. Thus the VX1962wm looks fairly attractive from the back too, though its cables aren’t hidden. Speaking of which, cable management is rudimentary, with the usual weak plastic clip providing just about enough room for two wires to be routed through it.


Connectivity is fairly standard, consisting of VGA, HDCP-compliant DVI and 3.5mm audio to feed the monitor’s twin 3W speakers. To its credit, ViewSonic provides cables for each of these.

As already mentioned, the bezel is narrow even along most of the bottom, except for a bulge displaying the ViewSonic name, a small round blue LED which doubles as the power button, and the control buttons along the bottom edge. Before we get onto those, I just want to quickly mention the ViewSonic logo. Found in the top-left corner, the three birds are in my humble opinion by far the friendliest logo in the technology industry, and certainly the most colourful (they’re Gouldian Finches in case you were wondering – ed.).


Anyway, back to the buttons, these are of the physical kind, and are marked by unobtrusive icons at the monitor’s front. In fact, these are so unobtrusive that you’ll need very good light to even see them in. Thankfully, thanks to a logical layout you won’t need to. The first two buttons act as select and back, while the next two scroll between options. They also act as shortcuts, with the first calling up the OSD, the next switching between inputs, the next calling up volume, while the last grants access to brightness and contrast. 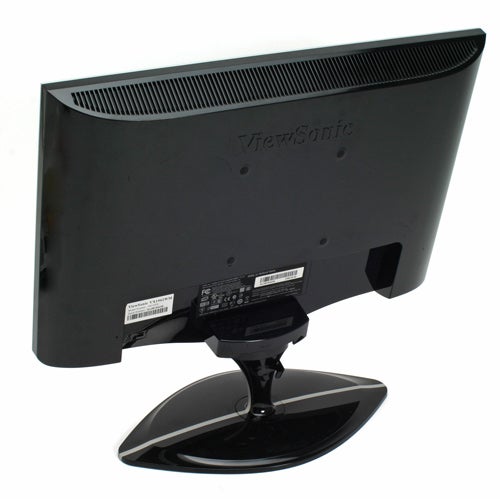 Funnily enough, considering the Iiyama ProLite E2207WS was the most recent monitor I’ve reviewed, this ViewSonic features an (initially) very similar OSD. It’s basic and small, but colourful and fairly logical. Options are quite extensive , including the usual adjustments such as sharpness and colour balance. But by far the most interesting ones are to be found under Manual Image Adjust.


Here you can switch Dynamic Contrast between the native 3000:1 and dynamic 6000:1, though as ever these figures should be taken with a generous helping of salt. You’ll also find aspect ratio controls, which allow you to switch between 4:3, Fill Aspect Ratio (intelligent stretch) or Full Screen (to be avoided since it might ‘cut bits off’ the image).


The most unusual adjustment concerns response time, which you can switch between Standard, Advanced and Ultra Fast. Ultra Fast takes the VX1962wm down to the usual 2ms gery-to-grey time, but there are cases where reducing overdrive is a good thing, as especially on 6-bit TN panels it can adversely affect image quality.

So how does the all-important image quality of this 19in beauty measure up? Put simply, very well. Let’s get the fairly minor negatives out of the way first; there is enough backlight bleed along the screen’s bottom to be noticeable, but only if you’re looking for it. Banding is also present, but again it’s only bothersome under rare conditions.


Text is fairly sharp, and greyscale performance is strong. While this ViewSonic doesn’t match up to PVA or IPS based displays, it did manage to distinguish most of the subtle tones at both the dark and light ends of the scale. Amazingly though, the VX1962wm counteracts the biggest traditional weakness of TN panels; namely poor viewing angles. Seriously, the viewing angles on this monitor have to be seen to be believed. The only exception is when viewing the panel from below, but even here you have to be at an extreme angle for them to become poor. From any other angle, colours and contrast stay excellent no matter how far you move – great stuff ViewSonic!


These strengths make this an excellent entertainment screen if you can put up with the small size. Games and movies look great, especially for a cheap TN. Even turning on Dynamic Contrast is quite viable, since it does deepen blacks without costing much in the way of dark detail – although whites will lose some of their impact. 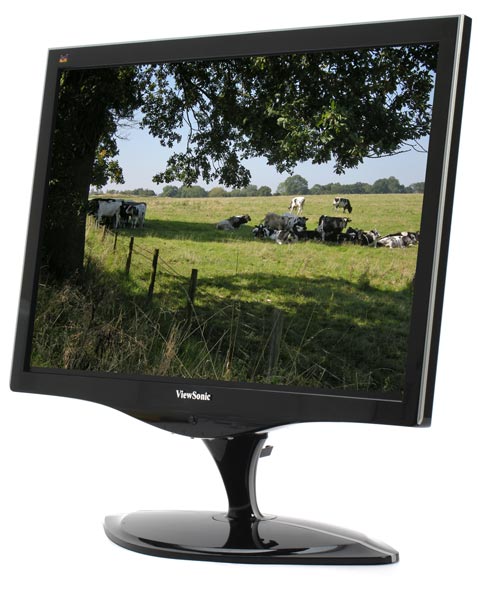 Finally getting onto the fancily marketed SRS Wow HD speakers, it’s the usual story in that you’re better off using even cheap external speakers or a pair of headphones. However, despite a distinct lack of bass and distortion at high volume levels, they’re usable if you keep the volume moderate.


When it comes to direct competition, this is somewhat limited since 19in monitors with a 1,680 x 1,050 resolution are still relatively rare. The VX1962wm beats its predecessor solidly, but unless you’re severely space or weight constrained, the real competition lies in 20 or even 22in displays. Here the fully adjustable BenQ G2200WT 22in makes a strong case for itself. However, the ViewSonic’s far superior visual design and viewing angles, together with a £33 lower price tag, mean it’s still a highly compelling option.


With the VX1962wm, ViewSonic has produced a very stylish 1,680 x 1,050 19in monitor, which puts in an excellent image quality performance to match its attractive looks. While you do pay a premium over other, lower resolution 19in models, if this is the size you’re after then you won’t regret buying this beauty.