In case you hadn’t noticed, the tech world is going touchscreen. Large-screen phones and tablets are making the masses more comfortable with touchscreens, and Windows 8 is set to make touchscreen PCs seem normal. The ViewSonic VSD220 Smart Display is fully signed-up to the touchscreen revolution. It’s a multi-touch display with an integrated Android computer that will also act as the monitor for a Windows 8 PC.

The ViewSonic VSD220 Smart Display’s unusual abilities aren’t things you’d notice from a glance, though, because in most respects it looks like a simple lifestyle-inflected display. There are no great big bulges on its back and its Android brain fits under the hood – the only additional box here is the power adapter. 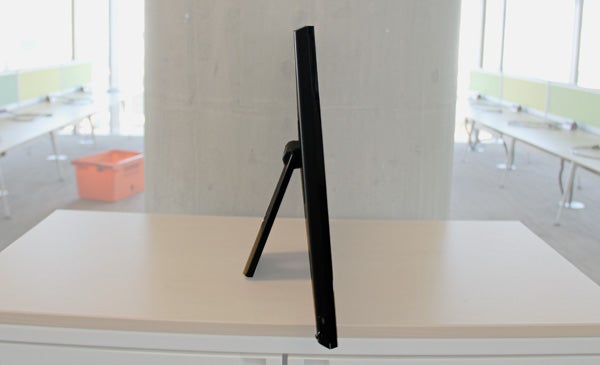 Its screen is 21.5 inches across, making it computer monitor-sized rather than something to make the focal point of a living room. Its design straddles the worlds of work and leisure. Its angular black frame is serious and fuss-free, but it uses a picture frame-like kickstand rather than a more officious pedestal stand.

The bottom of the ViewSonic VSD220 Smart Display’s stand is finished with rubber, supplying enough friction to let you angle the screen as you wish. Fully upright or near-horizontal – either is no problem, and readjusting only takes a second. The entire rear plate can be removed for wall-mounting too. 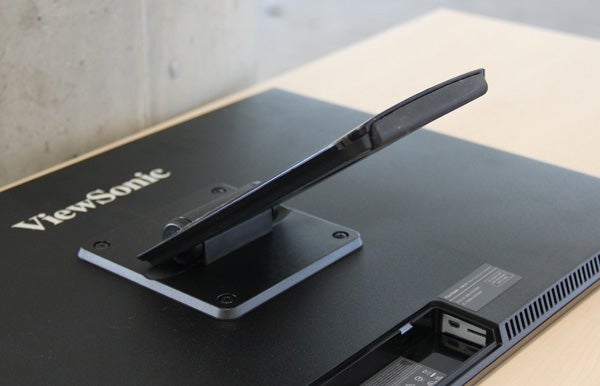 This lets it fit into places other than the office easily, but the ViewSonic VSD220 Smart Display build and looks aren’t quite on-par with some of its more expensive all-in-one PC alternatives. 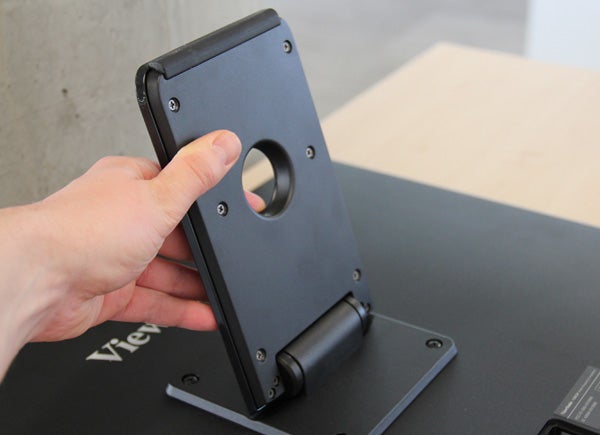 Its frame is all-plastic, even the brushed metal-effect strip at the bottom that wants to will you into believing it’s a little classier, and it’s not exactly stunningly pretty. It’s no Sony Vaio Tap 20, but it costs a fraction of the price.

The ViewSonic VSD220 Smart Display costs around £100 more than a similarly-sized touchscreen monitor, and the extra outlay buys you Android. As the Android system is fully built into the display, no other hardware is needed to make the VSD220 work.

Within the fairly slim shell of the ViewSonic VSD220 Smart Display are a 1GHz dual-core Texas Instruments OMAP 4430 processor and 1GB of RAM that powers the Android 4.0 Ice Cream Sandwich operating system. It has 8GB of internal memory, and integrated Wi-Fi to give you easy access to all the Android basics – web browsing, email, the Google Play app store and so on.

There’s also a front 1.3-megapixel webcam for video chat, Bluetooth and basic internal speakers. You’re not going to want to play music through them, but for the occasional YouTube clip they’ll do the job.

The ViewSonic VSD220 Smart Display’s on-body connectivity opens-up its usefulness much further. There’s a microSD slot to let you jam in a memory card, two USB ports on the right edge for plugging-in a mouse or keyboard, a 3.5mm headphone jack and an Ethernet port.

All these help the ViewSonic VSD220 excel as a giant Android tablet, but there’s also a microUSB port on the left edge that lets the
display work as a touchscreen interface for another device, and a
microHDMI video input on the rear. You can plug in a Windows 8 PC if you
like, or even a games console. 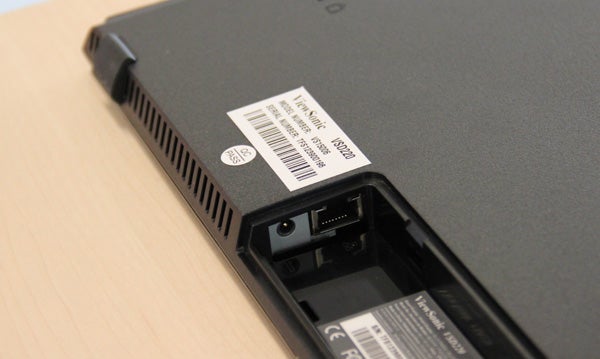 ViewSonic makes it easy to switch between roles as an Android computer and a “slave” monitor easily, with an OSD (on-screen display) shortcut plugged into the persistent Android nav bar.

There are three key ingredients to making an Android system work. You need the right interface to control the system with, the right version of Android installed and enough power to get it running properly.

The ViewSonic VSD220 Smart Display performs respectably on all fronts. With a two-point multi-touch optical touchscreen, you can perform the two-fingered gestures that have become a key part of any modern touch-operated system. The most obvious is the pinch-to-zoom gesture, used throughout Android. 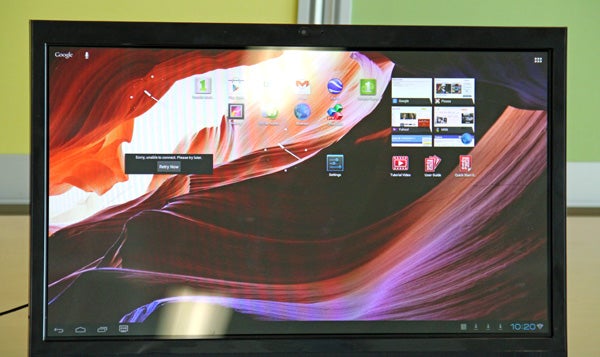 The version of Android used here is Ice Cream Sandwich 4.0, with just a few slight alterations. ViewSonic’s main change is the OSD overlay, giving input and screen controls. Other than that, Android here behaves just as it would in a 10-inch Android tablet.

Impressively, the Android UI doesn’t feel as if it has been unnaturally crammed into the ViewSonic VSD220 Smart Display, thanks to its core scalability. Unlike iOS, which tends to look odd when blown up to this size, Android Ice Cream Sandwich looks and feels relatively at home on a 21.5-inch screen.

However, there is the core issue that using the ViewSonic VSD220 Smart Display as you would a tablet feels quite laborious. There’s a lot of moving your hand from one side of the screen to another, and next to the small movements demanded by phones and tablets, the arm-waving required here feels like an awful lot of effort. And we’re not just saying that because we’re interminably lazy.

The screen is coated with toughened glass, but its surface is higher-friction than that of most tablets and smartphones, which doesn’t help either.

Escape from the Android UI by loading up an app and the situation often improves – a session of Angry Birds Star Wars on the ViewSonic VSD220 Smart Display is just as fun as you’d hope. Although the CPU used here is not powerful compared even to budget tablets like the Google Nexus 7, the dual-core 1GHz OMAP 4430 is powerful enough to make most popular Android games run at full speed. 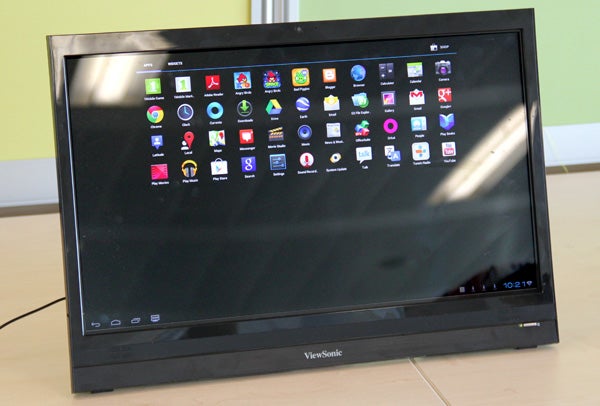 Many of the most graphically intensive games – first person shooters, for example – are not at all suited to being played on such a large touchscreen anyway.

There are jerky moments in day-to-day navigation of the Android interface, though, and they make us wish ViewSonic had equipped the Smart Display with Android 4.1 Jelly Bean, which significantly greased the cogs of the system.

What’s arguably more important is that ViewSonic has packed-in the majority of Google’s own apps. The Google Play app store is here, as are Gmail, Google Earth, Google Maps, Google Talk and others. The only significant omission from the Android staples is Google Navigation, which would be pretty useless in a GPS-less device anyway.

The inclusion of these services is a sign that this is a good-quality device. Getting these services on-board requires full Google certification, which is expensive and therefore often avoided by makers of lower-cost Android gadgets. We did encounter a few bugs, though, especially when exploring the Google Play app store. Some patience is required.

The Android UI lets you turn the ViewSonic VSD220 Smart Display into a hundred different things, though. It can be a Netflix portal, an internet radio, an easy Microsoft Office workstation, a web browser, a hugely over-specced weather station and plenty more besides.

At 21.5 inches across, the ViewSonic VSD220 Smart Display is the size of a standard computer monitor. Aside from the multi-touch optical touchscreen tech that’s built into the bezel, its display looks a good deal like that of the computer monitor too.

It uses a 1080p panel of the TN type, still the most common sort found in low-cost screens. The benefit of TN screens is that their response times are quick, eliminating motion blur issues. They’re not so hot on most other fronts, though.

The ViewSonic VSD220 Smart Display’s picture quality is unremarkable. Colours aren’t particularly lively, areas of black have a slight blue-ish tint to them and if you view the screen from underneath, contrast shift robs the image of any presence. Of course, this is not a screen that you’re meant to look at from below, and horizontal angled viewing only causes some loss of brightness. 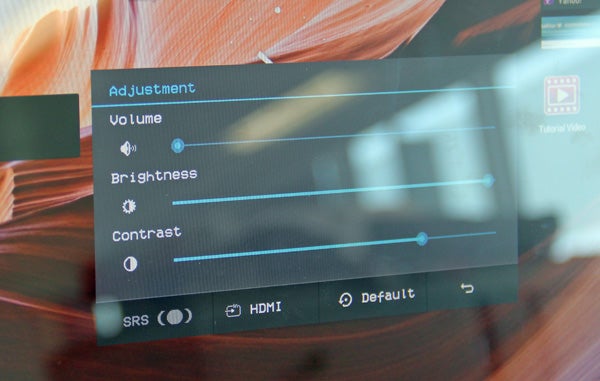 This sort of performance is standard for a screen of this type, but it’s not the only kind of touchscreen you can get at the price. The Dell ST2220T uses an IPS panel and similar optical touch technology, but doesn’t have any Android goodies – it’s a dumb monitor.

Here’s the issue – there’s not much out there like the ViewSonic VSD220 Smart Display. This makes it on one hand an interesting device, but it also makes quantifying its worth tricky. If you just want a touchscreen monitor to use with a Windows 8 computer, you can get non-smart alternatives for around £100 less. And if Android is the main draw, it feels better within a tablet. 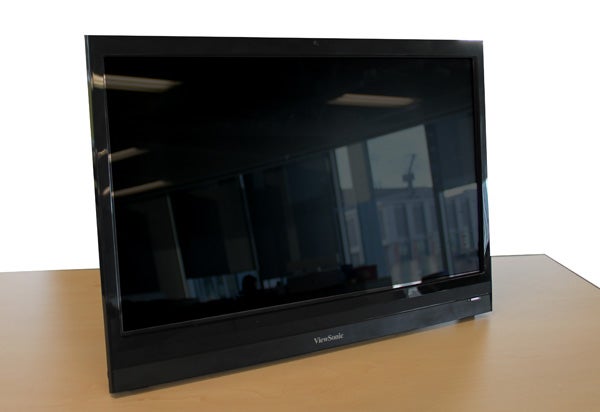 Do you want both a touchscreen monitor and an Android box for the house? The ViewSonic VSD220 Smart Display is a surprisingly good entry, given the quality of some of ViewSonic’s past Android tablet efforts, and even if you don’t like the feel of using such a large touchscreen, mouse input is only a minute away.

The ViewSonic VSD220 Smart Display arrives at an opportune time. It’s a smart monitor that can be used on its own as an affordable Android-based all-in-one PC, or with a computer as a Windows 8 interface. Thanks to its decent multi-touch optical screen, it can handle basic Android tasks well too. However, as the display quality isn’t that hot and Android can be hard work on such a large screen, it’s not quite the perfect solution.