Traditionally ViewSonic has been associated with monitors, but recently the company has been diversifying and one of the most recent results is its VPC100 – a 19in All-In-One PC. Its sleek black chassis houses an 18.5in screen running off the usual netbook/nettop specifications, including a 1.6GHz Intel Atom processor, 1GB of RAM, a 160GB hard drive and niceties such as a card reader, optical drive and Wi-Fi.


Despite very similar internal specifications to previous Atom-based all-in-one (AIO) PCs we’ve looked at, such as Shuttle’s XVision X50 and Asus’ Eee Top, the ViewSonic is a very different machine. For one, both of those machines had touch-sensitive 15.6in screens where the VPC100 sports a non-touch 18.5in display. Its design is also dramatically different, dropping the smaller AIOs’ Apple-esque white finish for a piano-black and elevating the PC’s base off the desk with a fairly elegant stand. 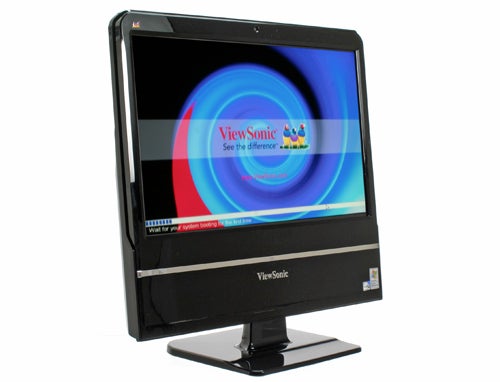 Starting off with the bundled peripherals, things look pretty grim though. First of all, they’re both PS2 instead of USB, which while hardly a great problem is a tad unusual in these modern times. Second, while it might look nice with its combination of matte keys against a glossy background, the ViewSonic-branded keyboard is unequivocally the worst desktop keyboard I have ever used – and I’ve come across some terrible examples in the past.


Feedback is lousy. Most of the keys are noisy and clacky in a cheap, flimsy way, except for the Enter key which is just mushy. It’s the layout that will really drive you mad, though. À la the worst netbook keyboards, the right-shift key is tiny, and with the up-cursor right beside it you’ll often move up when you meant to capitalise. Then there’s the lack of dedicated End, Page Up/Down, Home, Insert and Delete keys. No spacing on the F-keys and undersized function keys on the left are the sour icing on the mouldy cake. 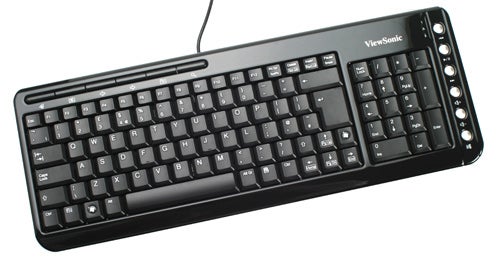 ViewSonic’s optical mouse is a comparative marvel, which is to say that it is adequate. For an ambidextrous model it’s comfortable enough. Though a tad on the noisy side its two buttons offer good feedback while the rubberised, notched two-way scroll wheel also does the job. However, compared to any number of cheap mice available on the market, it’s nothing especially noteworthy.


Still, peripherals can easily be replaced, so let’s hope the PC fares better. Assembly is as easy as can be: merely attach the stand to the ViewSonic’s base and tighten a single screw – you don’t even need a screwdriver as it has a hinged clip for this very purpose, which means it’s as simple to disassemble as put together. The base also has a metal plate for extra strength and feels very solid indeed. 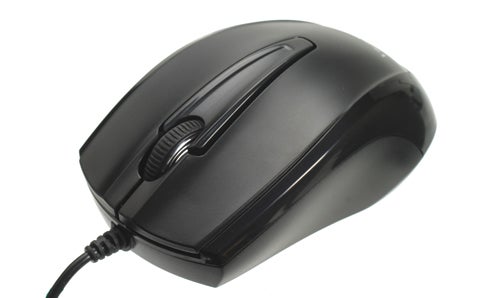 Though the rest of the machine isn’t quite as well-built, with some flex around the optical drive area, nonetheless it’s well up to standard overall. It’s not a bad-looking AIO-PC either, despite the slight dissonance between its rounded top and square-edged lower section. The entire chassis is glossy black, broken only by a tasteful faux-chrome strip near its base and the ViewSonic logo. This strip houses the power button, distinguished by an etched power icon unobtrusively backlit in blue.

Connectivity isn’t the VPC100’s strong suite. Two USB ports on the side and two around the back is quite poor, especially when compared to the smaller Eee Top which offered six – though of course you do get two PS2 ports here. There’s also a memory-card reader supporting xD, SD/SDHC, MMC and Memory Stick along the side, microphone and headphone jacks on the back together with a Gigabit Ethernet port. While this is a failing with most affordable AIO-PCs, we would also really like to see some kind of video input, especially since at 18.5in the ViewSonic would have been quite usable as a small TV. 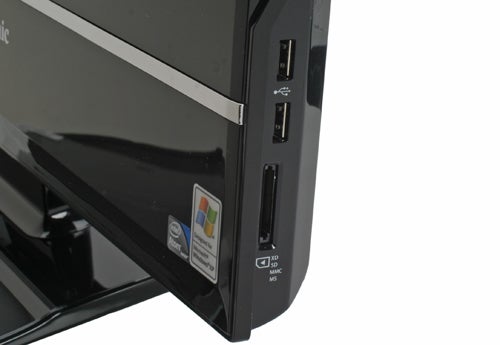 The optical drive is a tray-loading eight-speed DVD-Rewriter as opposed to the slot-loading models more frequently used on AIOs. This in itself is no bad thing, as it not only helps keep costs down but can read mini CDs and the rectangular ones which some people use as business cards. However, it’s difficult to open, and quite a bit of pressure is required on the small and shallow eject button. This in turn leads to the whole PC shaking on its stand after you try to open the drive, which is annoying and not exactly characteristic of a high-quality product. 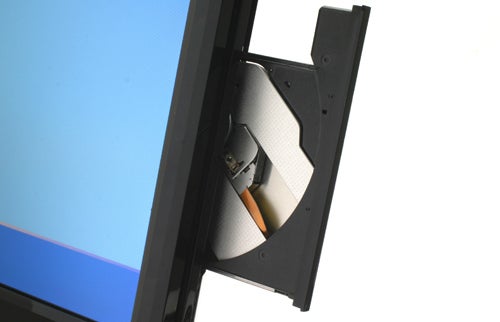 As already mentioned, the slim chassis (3.5cm at its thickest) houses a single-core Atom N270 processor running at 1.6GHz. Backed up by only 1GB of RAM and Intel’s GMA 950 integrated graphics, this provides enough power for the everyday tasks, simple games and SD video that most people will require from a PC such as this (and will even manage 720p video if using an efficient codec), but keep in mind that high-quality HD video and intensive multitasking are a no-go.


Remember that in terms of internal components you’re basically looking at a netbook here. In line with this, the 160GB hard drive is no surprise. You might expect more on a desktop machine, but to keep the chassis slim ViewSonic has stuck with a 2.5in drive, and to be honest anyone who is satisfied with the general performance of an Atom probably won’t need more storage than this.

Integrated Wi-Fi is another nice touch even if it is only up to 802.11g. However, the main advantage of the underpowered components is that they should not only help with your electricity bill but also allow the VPC100 to remain remarkably quiet when it’s turned on. In fact it’s one of a very few PCs that can be classified as near-silent.


Since this isn’t a touch-screen machine, you essentially get the same Windows XP experience as you would on a netbook. There’s a minimum of software installed, with NTrusted Reviews Maker for burning discs and Trend Micro Internet Security on hand to hopefully prevent virus infections. Webcam AP also lets you have some fun with the 1.3 megapixel webcam and microphone integrated in the top of the screen’s bezel.

One area where you would expect the VPC100 to excel given ViewSonic’s pedigree is its screen and though by no means class-leading it does actually perform better than some monitors we’ve had through the labs. It’s a bit low on dark detailing but colours are bright and engaging, text is sharp and viewing angles are reasonable. Only the screen’s resolution is a cause for disappointment, which at 1,366 x 768 is lower than we had hoped, but largely sufficient for most needs. 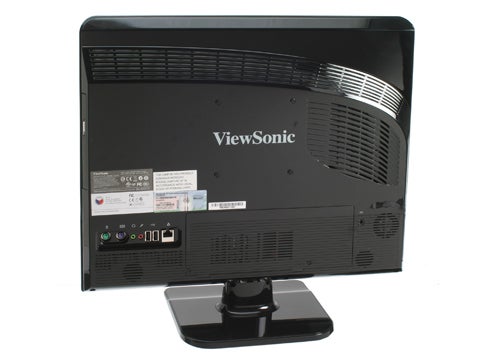 For integrated efforts and considering their measly 3W rating, the stereo speakers aren’t too bad either. Though they have a very low maximum volume there’s no distortion, trebles are fairly clear and there’s even a modicum of bass; certainly adequate for everyday activities and YouTube, though listening to music and films is better done using headphones or external speakers. 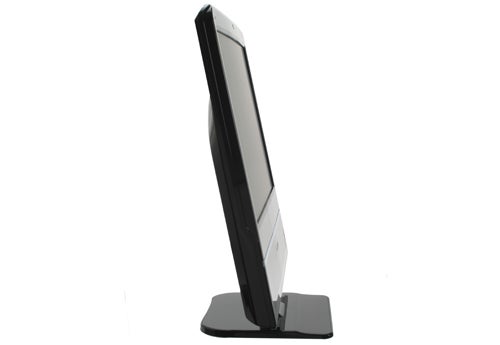 Whether the VPC100 is good value is anything but straightforward. At £375 it’s far cheaper than other Atom-based AIOs we’ve reviewed, but lacks a touch-screen. Its strongest competitor is thus Acer’s Aspire Revo, which can be bought with the aforementioned VX1962wm 19in monitor for around £360 – giving you a better, higher resolution screen and far more powerful PC (thanks to nVidia’s ION chipset allowing playback of Full HD material and even some 3D games) with more memory and connectivity for less money. The only thing this package is lacking is an optical drive, though an external USB unit is only around £30. Of course part of the appeal of the VPC100 is that it’s a real AIO, but with the tiny Revo monitor-mountable it’s not necessarily that big a difference. 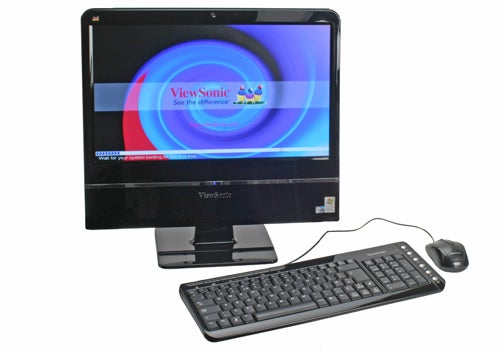 If you must have a true AIO and don’t care about touch-screen, the ViewSonic VPC100 is definitely worth considering as it’s one of the cheapest machines of its type available. Competitors from the likes of Lenovo, Avaratec and MSI might be slightly better specified, but demand considerable premiums.


A fairly attractive and well-built machine, ViewSonic’s VPC100 19in All-In-One PC is slightly let down by its terrible keyboard, limited connectivity and weak internals, but makes up for it by being very affordable. However, if you don’t insist on a super-slim all-in-one, it’s worth looking at the alternatives first.