I’ve always liked the ViewSonic VP range of monitors – they achieved an impressive balance of great screen quality, pleasing design and well considered ergonomics. In fact the design and ergonomics of the VP range were second to none, which was surprising considering how long ViewSonic kept the design static. But now the VP range has been updated, with the VP930 being the first of the new breed to make its way into the TrustedReviews lab. Of course the big question is, how does this new model compare to the outgoing one? 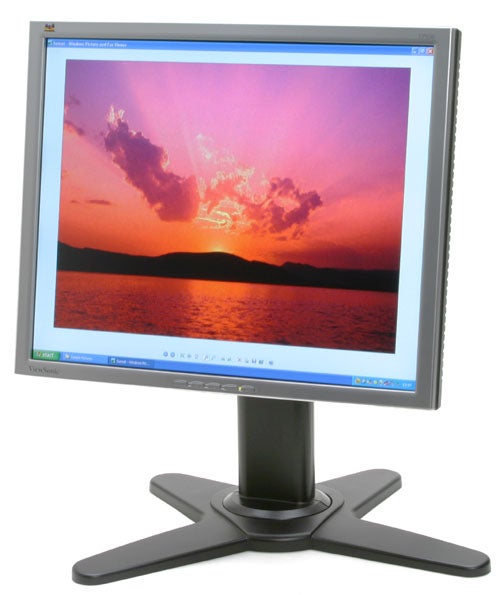 The most obvious change is the stand. The VP range always used a trademark stand incorporating two large angled feet pointing towards the user. This made for a very steady base, while also not taking up masses of desktop space. The new design still has two feet pointing towards the user, but also has two corresponding feet pointing the other way – the result is a kind of X shaped footprint. I imagine that the new design is meant to offer greater stability, and there’s pretty much no way that this screen will topple over no matter what angle you push it from. However, I can’t say that I ever had any problems with previous VP monitors falling over.


The main column design has also been changed and the screen now slides vertically up and down two rails – the previous VP monitors used a telescopic central column to facilitate vertical movement. I loved the dampened vertical movement on the old VP monitors, but the movement on the VP930 is even lighter – you can literally move the screen up or down with the pressure from one finger. 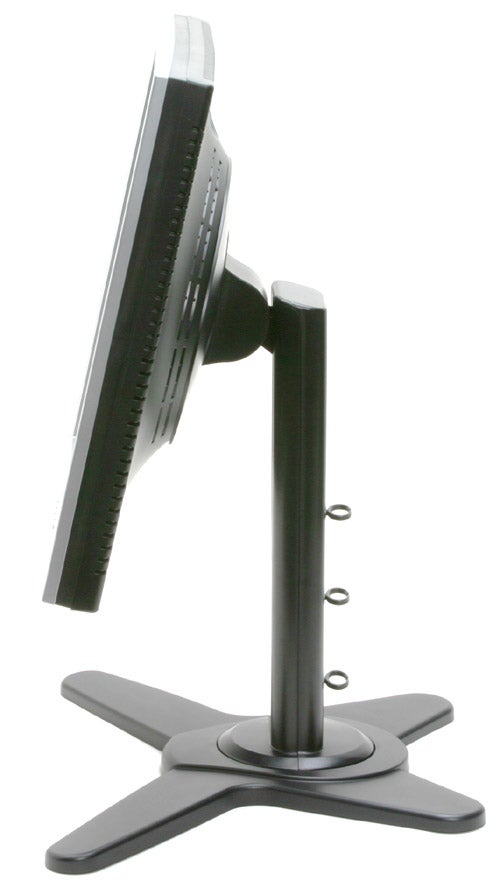 The panning motion is also superb – you can turn the screen around in almost a complete circle. ViewSonic quotes a 270 degree movement for the panning, but it definitely seems to be more than that in use. You can pivot the screen into a portrait mode too and ViewSonic has maintained its OSD party trick – the OSD will switch from landscape to portrait as you move the screen.

The central column has three cable tidies – as with the previous VP monitors, these do a good job of keeping your cables in check. However, I did find that when I tried to pull a cable free, the tidy came out of the column – it was easy enough to put back in though.


Connection options are generous for a 19in 1,280 x 1,024 monitor. At the rear you get one DVI port and two D-SUB ports – this means that you could connect three PCs to this screen and switch between them. There’s a one button input-select on the front fascia, so you can easily switch between inputs. Also at the rear is a standard power connector and a “hard” power switch. 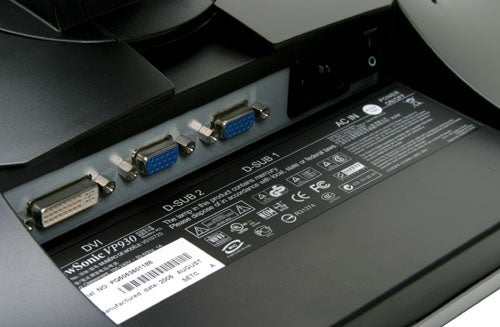 The silver bezel surrounding the screen is slim and has a nice rounded finish to it. As usual, branding is subtle with a ViewSonic logo in the bottom left corner, the model number in the top right and the trademark Gouldian Finches in the top left.


There are five buttons on the front fascia. The power button is self explanatory, while the 1 button will bring up the OSD, The two arrow buttons will then navigate through the OSD, while the 2 button will make selections. The 2 button also doubles as an input select button, while pressing either arrow button while not in the OSD will bring up the Contrast adjustment. 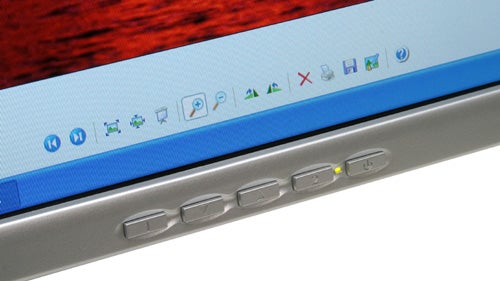 Unlike many of the super-low response time monitors that have hit the streets recently, the VP930 uses a proper 8-bit panel – that means you’re getting the full 16.7 million colours as opposed to 16.2 million. ViewSonic quotes an 8ms grey to grey response time, which equates to 20ms using the old off-on-off measurement. To be honest though, I don’t really put too much stock in response time – I play a lot of games and I’d be hard pushed to see any difference between a 4ms and 16ms display. In fact I played several games on the VP930 and it performed brilliantly, but to be fair that’s not what the VP range is all about.

ViewSonic’s VP range has always been about style, features and image quality. The VP930 definitely has the first two covered, but how does it manage in the image quality stakes? Well to be honest, it’s not as good as I was expecting it to be.


Now, image quality can be a subjective thing, and what one person deems to be good, isn’t necessarily going to please someone else. This is why we use DisplayMate to highlight strengths and weaknesses in monitors. Unfortunately DisplayMate did manage to highlight some shortcomings in the VP930. The Dark Greyscale test proved to be an issue for the VP930 where it failed to bring out the low intensity greys no matter how much adjustment I tried. 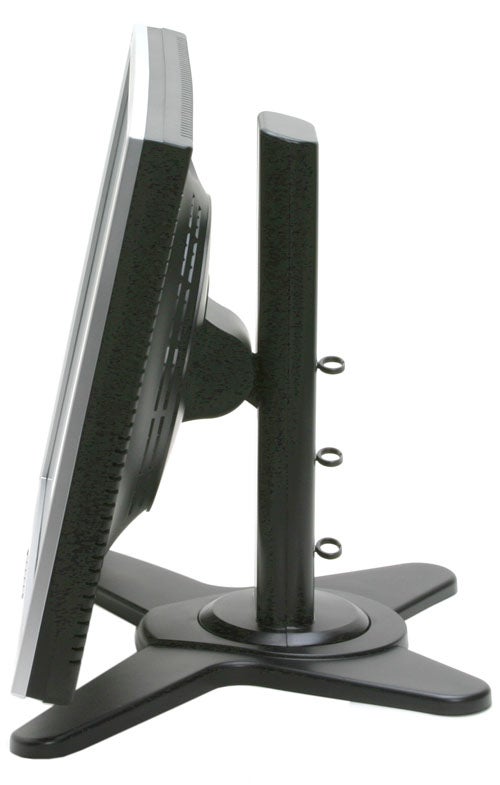 The problems with greyscales became more apparent as I pushed through the tests, with tinges of green and pink clearly visible on the 64 step greyscale test. The 256 level intensity colour ramp test also showed signs of compression at the low intensity end of the scale. The VP930 also struggled on the colour scales test where the drop off at the low intensity end was uneven – if I tried to bring out some extra detail at the low end, the result was compression at the high end.


To be fair though, these shortcomings didn’t seem to creep into day to day use. I’ve been using the VP930 for the past couple of weeks as my main display and it has performed admirably, even when doing Photoshop work. It is a shame though that previous VP monitors have sailed through the DisplayMate tests without breaking a sweat.


In the box you’ll find both D-SUB and DVI cables, as well as a standard kettle type power lead. There’s also a quick setup guide, a user guide and installation software CD and a disc containing a utility called PerfectSuite.

PerfectSuite is quite a useful application that will help guide novices though monitor setup and balancing the brightness and contrast for the best possible image. Unfortunately, even after following the steps in PerfectSuite the VP930 couldn’t make it through the DisplayMate obstacle course unscathed. One feature that I really liked in PerfectSuite is the ability to set auto-pivot. This means that as soon as you rotate the screen into portrait mode, your desktop will reconfigure automatically – very cool. 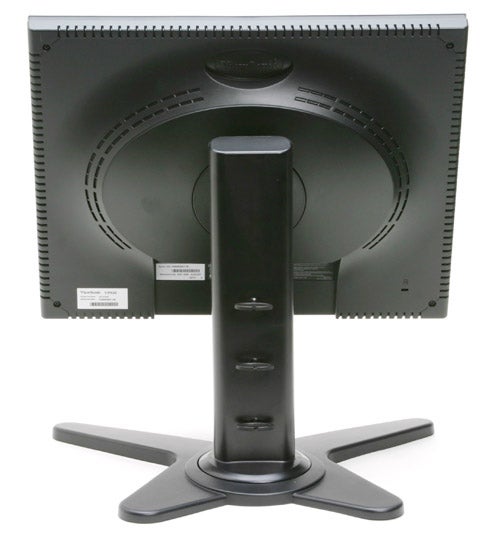 A somewhat stranger feature in PerfectSuite is the “Theft Deterrent” option. This allows you to password protect your screen, so that if someone steals it they won’t be able to use it on another PC. I’m not quite sure how this will deter any thieves because they won’t know about it – in fact the first time they will realise that the screen is password protected is after they’ve stolen it and plugged it in somewhere else. Something tells me that the thought of a thief having a useless screen will be little consolation to me while I have nothing to work on. Perhaps it should be called a thief annoyance feature, rather than theft deterrent.


With a price of £377.86, the VP930 is more expensive than the outgoing VP191s that it replaces, while not exhibiting the same level of image quality. There’s no doubt that the VP930 retains the design, features and build quality of the previous VP series screens, but it’s just a shame that it stumbled in the DisplayMate tests.


The VP930 is a beautifully designed 19in monitor with more features than you could shake a stick at. The price is high, but you’ll soon forgive that when you see the connection and adjustment options. Unfortunately the image quality is just not up to the high level that ViewSonic set with previous VP displays.