There are many factors that go into what makes a good monitor. Once you decide on a size and budget you have to look at the panel type, resolution, connectivity, adjustability and extra features. Just one step below 30-inch screens often costing over £1,000, 27-inch IPS displays with a fantastically-high 2,560 x 1,440 resolution are the cream of the affordable crop.

Coming in at around £580, the professionally-oriented ViewSonic VP2770-LED costs around £20 more than Samsung’s rival S27A850D (SA850 27in), but does offer greater adjustability, more connectivity, and uses a later-generation panel that’s been factory calibrated. 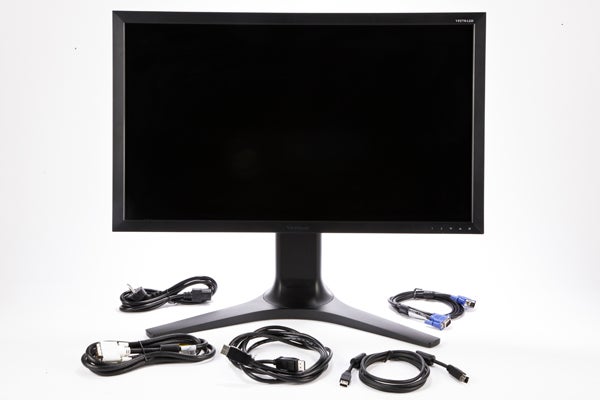 In fact, on paper ViewSonic’s entrant has it all: an LED-backlit, 10-bit IPS panel, tuned presets, more video connections than you can shake a very long stick at (even VGA!), a built-in USB 3.0 hub, and full adjustability including tilt, swivel, height and pivot. Even the included cable selection is generous, and ViewSonic throws in a 3-year warranty to boot. Does this make its VP2770-LED the bargain it appears to be?

The VP2770-LED is a monitor that means business, and as such doesn’t make any apologies for its business-like looks. Every bit of this monitor is covered in lightly textured matt black plastic, meaning it’s easy to maintain and doesn’t particularly show off fingerprints or dust.

ViewSonic also gets brownie points for making the entire bezel relatively thin and perfectly uniform, with its logo imprinted quite subtly and an unobtrusive blue power LED. While the VP2770-LED’s chassis will never be a showcase like that of the designer Samsung Series 9 S27B970D, that’s not what most high-end monitors are (or should be) about. 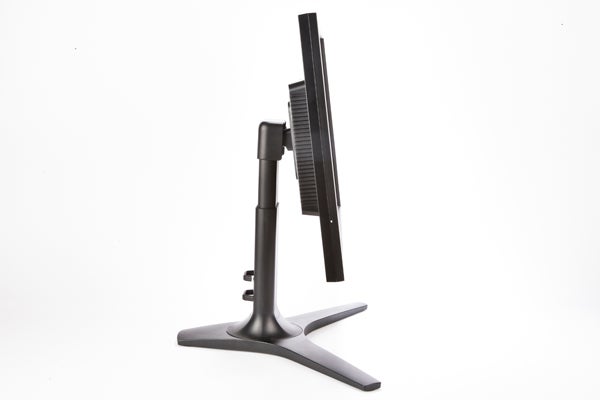 Build quality throughout is good. The plastics used are thick and there’s no creak or give anywhere, except for one small panel in the stand leg’s centre that’s hardly likely to come into contact with anything. Assembly is easy and secure, only requiring the base to be attached to the stand with a simple thumb-screw. A holding pin needs to be removed to allow height adjustment.

When it comes to adjustments, the VP2770-LED is playing to win. It offers the usual 25-degree tilt and a very welcome 90 degree pivot, in addition to superb swivel in both directions. What gives the VP2770-LED an edge though is its incredible height adjustment, which takes the bezel’s base from 10cm at its lowest point to a whopping 25cm off your desk. Mind you, most high-end 27-inch displays can be adjusted much lower, but we far prefer the extra height. 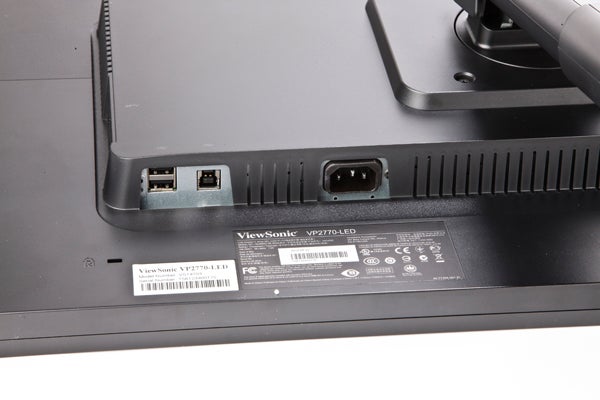 Adjustments on this ViewSonic are not quite as smooth as on some rivals but offer a reassuring solidity. Just be careful to ensure the screen is positioned high enough when attempting to pivot.

Connectivity is likewise top notch. On the video side of things you get to choose between DisplayPort, HDMi 1.4, dual-link DVI and even VGA. There’s a 3.5mm jack to output audio from HDMI, which is great when hooking up a gaming console or media player. Thankfully, ViewSonic hasn’t wasted space and money trying to integrate speakers. Finally there’s a four-port USB 3.0 hub, which is always a nice addition – especially since dedicated USB 3.0 hubs are far from cheap. 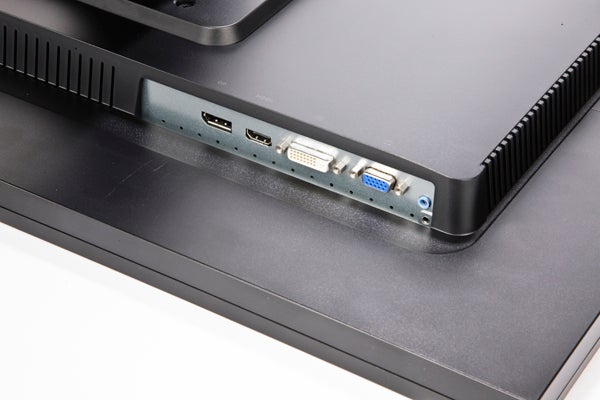 ViewSonic provides pretty much every cable you might need with its VP2770-LED monitor, including VGA, DVI, DisplayLink, and USB 3.0.

Its controls present our first minor gripe with the VP2770-LED, as they’re touch-based rather than physical, with all the inherent issues this brings. First off, it’s difficult to distinguish between controls in the dark, as there’s no physical feedback and ViewSonic hasn’t implemented the backlighting that made the Samsung Series 9 S27B970D’s ‘buttons’ so easy to locate. Then too, the touch controls aren’t quite as sensitive as the best ones we’ve come across, and if you press quickly they might not respond. Still, these issues are hardly unique to the VP2770-LED.

Shortcuts are fairly well-assigned: ‘1’ opens the menu, ‘2’ switches to the next active input, the down arrow gives direct access to volume control while ‘up’ lets you switch between the monitor’s factory settings or three different user ‘profiles’. 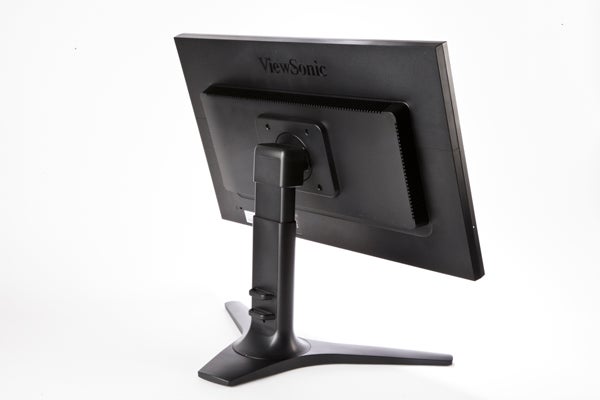 Where ViewSonic’s OSD is concerned, it’s a slightly grim and basic monochrome affair without a speck of colour – even when adjusting RGB values – nor is it context sensitive. All the options you might want are there, but they may require a little digging, and it’s not always obvious where a certain setting will be found. While we’re moaning, we would also like to have seen actual colour temperatures rather than just Bluish, Warm and Cool labels – especially since this monitor is, according to ViewSonic, aimed at imaging professionals rather than the average consumer.

Along with the majority of recent high-end 27-inch monitors, this screen uses white LED backlighting. This makes it more affordable compared to RGB-backlighting but means it doesn’t support an extended colour space – yet it still manages a very respectable 78 percent AdobeRGB and of course covers the entire sRGB spectrum. 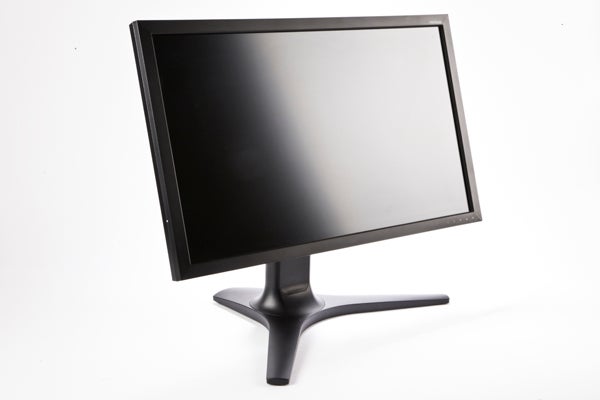 As you might expect from a display that has been factory calibrated, out-of-the-box settings are very good. Mind you, the standard default comes with the usual eye-searing maximum brightness, but just tone this down and you have an excellent basis for a great colour and settings profile. The sRGB preset is also well calibrated, with natural colours and a nice brightness setting, but manual brightness and contrast control are unfortunately disabled.

The ViewSonic VP2770-LED’s good news continues when it comes to panel quality. Blacks are deep for an IPS/PLS display, and even the darkest shades are clearly visible without destroying subtlety in whites with perfectly smooth gradients across colours. 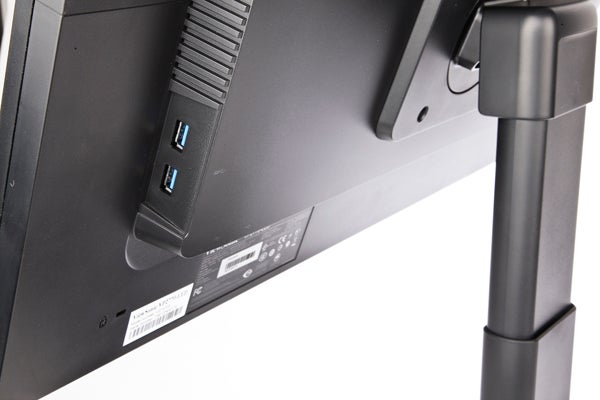 Backlighting too was relatively even with only the merest hint of backlight bleed from the right, but this was so minimal you wouldn’t notice unless specifically looking for it. The semi-matt anti-glare finish this monitor uses also successfully eliminates most reflections but doesn’t produce that slightly grainy look that the matt filters on IPS panels frequently do. Viewing angles, meanwhile, were almost flawless as you would expect from IPS/PLS. Only the slightest shift occurred at vertical extremes.

Getting to gaming, ViewSonic quotes a response time of 12ms GTG which seems on the conservative side as we noticed little ghosting or blur, and for gaming this is at least as good as rival 27-inch monitors offering the same resolution. In other words, unless you’re a hard-core FPS gamer, the VP2770-LED shouldn’t cause any issues. 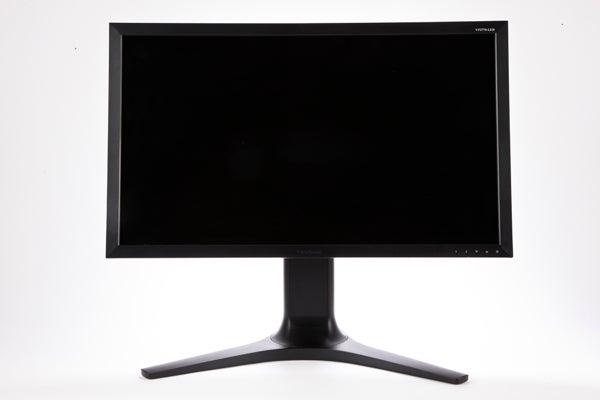 At around £580 online and with that price likely to go down as availability increases, the VP2770-LED presents excellent value. The Samsung S27A850D might be a bit cheaper but doesn’t offer as many connections, doesn’t come precalibrated, and its panel simply doesn’t hold up quite as well.

A more interesting rival is the new Dell UltraSharp U2713HM, which can easily be found for under £500. We’ll be reviewing this monitor soon and will let you know our thoughts then, but in the meantime, it’s important to note that the Dell shares connectivity, general panel characteristics, resolution, and even factory calibration with its rival, but lacks the ViewSonic’s (simulated) 10-bit colour depth.

ViewSonic used to have a reputation for making some of the best LCD monitors around, and with the VP2770-LED it’s regaining some of that ground. This high-resolution 27-inch display offers a superb panel with excellent colour characteristics and good factory calibration, set in a fully adjustable chassis with generous connectivity. The VP2770-LED is not perfect thanks to an outdated OSD and imperfect touch controls, but you won’t need to use these often and they don’t detract from what remains an impressive premium display.