Initially, you might think the ViewSonic VP2250wb to be an ordinary 22in monitor, but a quick glance at its £250 price tag reveals it should be anything but. After all, for this kind of money you can get the 24in Iiyama ProLite B2403, which offers identical adjustability and inputs, in addition to a higher resolution and more screen real estate. Even the panel technology is the same: TN+Film in both cases. 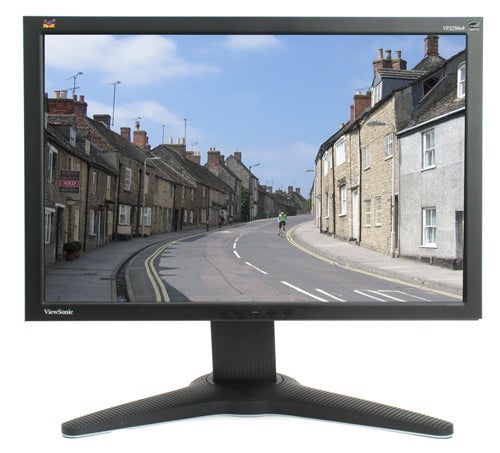 What makes the VP2250wb special, though, is that it is part of ViewSonic’s recently refreshed ProSeries; monitors for ‘top professional users’ – mainly in the fields of graphics, digital design and engineering. Apart from supposedly class-leading ergonomics and a comprehensive 3-year warranty, the real ace up the ProSeries’ plastic sleeve is extended/wide colour gamut – in this case 106 per cent. For those who are not familiar with what that means, the percentage refers to the standard NTSC colour gamut, of which sRGB is a sub-set. So here we have a panel that should be able to display the full NTSC range and more, theoretically leading to richer, more precise colours.


In general, I am sceptical concerning the use of wide gamut technology in TNs, largely due to concerns about poor viewing angles and the colour shift it generates. On paper though, the VP2250wb certainly has the specifications to make this a graphics professional’s dream, including a 3000:1 dynamic contrast ratio (1000:1 native) and claimed 170 degree viewing angles. So let’s find out how ViewSonic’s effort holds up in the real world. 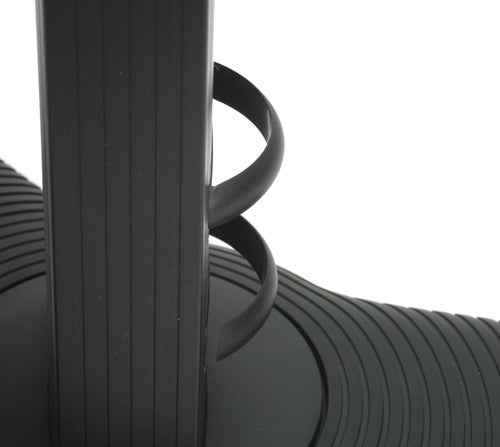 First impressions are certainly positive. The monitor arrives in two easy to assemble parts: one the panel and attached spring-action leg, the other comprising an impressively heavy and sturdy base. Indeed, it’s instantly obvious what market ViewSonic is trying to appeal to, since everything about the VP2250wb ”screams” industrial.


There are none of the curvy, mirror-finish shenanigans you’ll come across on many screens. Instead, you get a reassuringly rugged, chunky monitor finished in hard-wearing, matte black plastic; with obvious, square buttons unashamedly glowering from the middle of the lower bezel on either side of the solid, chunky LED (which is distractingly bright, but at least blue) that doubles as the power button.


Thanks to the amazingly heavy base it is almost impossible to move, unintentionally or otherwise. The base has three very long legs lending it excellent support and a rubber layer on the bottom plus 5 rubber feet, meaning no matter how often the VP2250wb gets moved, it will never damage your desk.

To complement its business looks the VP2250wb has excellent ergonomics, where decent tilt and height-adjustment are joined by a remarkable 120 degrees swivel and full pivot. Adjustments are smooth, and while not as effortless as some, they’re proportionately solid. Inputs are no more than what you might need or expect, consisting of a single analogue VGA and HDCP-enabled DVI, although there’s a nice surprise in the form of a four-port USB hub.

For multi-monitor use (an important consideration for the target market), the VP2250wb features a ThinEdge(TM) design – and while the bezel ”is” quite thin all around, since when were thin edges worthy of a trademark? It also comes with all needed cables, including USB A-B. So far, ViewSonic’s most recent professional 22in LCD reminds me of Rambo: it will do everything without a hint of subtlety or style but will do it thoroughly, which is exactly what professionals will want.


Unfortunately the OSD is one area where the ‘industrial’ theme gets carried a bit too far. I don’t mind a chunky monitor, but the menus have no business looking like they came from the Stone Age. Especially annoying is that the option to switch dynamic contrast on or off is buried beneath a layer of menus, or at least it would be annoying if you’d ever want to turn it on, which you won’t since it’s not particularly effective. ViewSonic seems to realize this, though, and has it switched off by default. 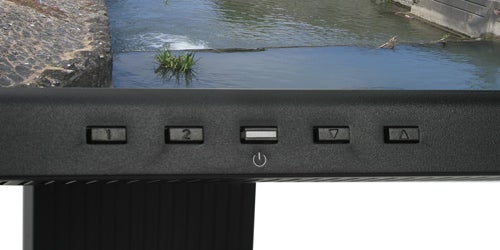 Still, it’s not all doom and gloom. While menus are not particularly intuitive, they’re easy enough to master and three of the four buttons act as helpful shortcuts. The one on the left beside the power button acts as an input switch, while ‘up’ and ‘down’ give direct control over brightness and contrast respectively.


Another nice touch is the ability of the OSD to pivot with your screen. This is accomplished in hardware without the need for drivers or user interaction.

Obviously, the OSD also offers a large selection of colour temperatures and most intriguingly, modifiable overdrive – or at least that is what we assume the menu means by adjustable response time settings. There are Standard, Advanced and Ultra Fast modes, which should oscillate between the ViewSonic VP2250wb’s 2ms (maximum overdrive) and unknown native response times. The optional (since it is nice for gaming) elimination of overdrive is, in my opinion, a necessity for any TN monitor with ambitions towards graphics use. 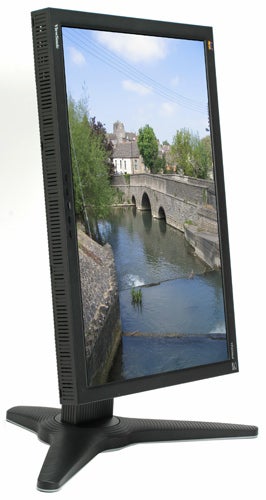 Another rare enough feature (though the scenarios in which it might prove useful are limited) that we find in the VP2250wb is reverse interpolation, or downscaling. Essentially, this means that feeding the 1680 x 1050 panel a 1920 x 1200 feed does not result in the usual black screen or out-of-range warning, but in a usable desktop. And the monitor helpfully throws up a notice for half a minute, politely informing you that you might want to change the source to match the panel’s native resolution.


But the one area where a monitor with professional aspirations obviously needs to excel is in terms of image quality and while the VP2250wb is good, it might not be quite good enough. First impressions were very encouraging indeed, with excellent viewing angles, and the Windows desktop practically leaping off the screen thanks to rich, vibrant colours. In fact, you could easily be forgiven for thinking the panel was some form of PVA or IPS. 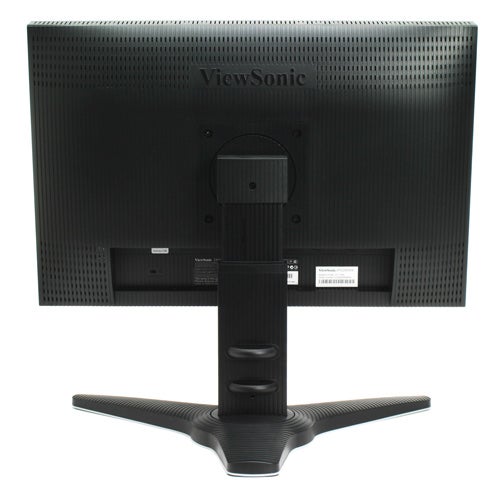 However, minor problems start with these very viewing angles. Although they are undoubtedly very good for a TN panel, and perfectly adequate during normal use, there is a slight colour shift that might make it unusable for your intended purposes. As I said, it is very minor, and will only change a hue of purple to a slightly different purple value. But for graphical professionals it might be enough of a difference to matter.


Contrast is generally outstanding, and again unusually for a TN the VP2250wb breezes through our gray-scale tests without any problems, easily differentiating between dark blacks while displaying pure whites. There is absolutely no evidence of banding and the whole experience is very vibrant, eschewing the usual faded colours that can affect TNs after re-balancing for accuracy.

However, this particular ViewSonic not only suffers from uneven backlighting, but some of the worst backlight bleed we at TR have seen in a while. There is a simply unlikely amount leaking from the top and bottom edges of the monitor, again a problem for the VP2250wb’s intended market and this one more serious.


The last point of note for the graphics professional is ViewSonic’s included software, which consists of a driver, digital user guide, and PerfectSuite Plus calibration tool. PerfectSuite Plus offers reasonably extensive adjustments and calibrations for your new monitor, though nothing you couldn’t buy separately. Again, one can’t help but feel that the options are not quite extensive enough for professionals, who will probably prefer their own specialised calibration hardware anyway. 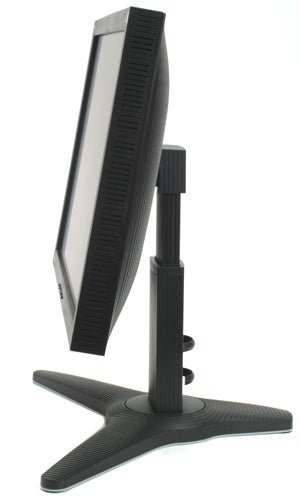 For entertainment though, the VP2250wb is generally ideal. Unfortunately, there is no 1:1 pixel mapping, or indeed any aspect ratio settings at all. But I can hardly fault the monitor for that, considering it is designed for non-entertainment use.


Overall, watching a movie is a really stunning experience. Colours jump out at you, while – despite the previously mentioned backlight bleed issues – excellent dark detailing lets you see more than most 22in monitors. There is no shimmering or other artefacts, apart from those inherent in the source. Similarly, games are a joy to play, with the whole experience delivering a lot of punch, and no signs of ghosting. 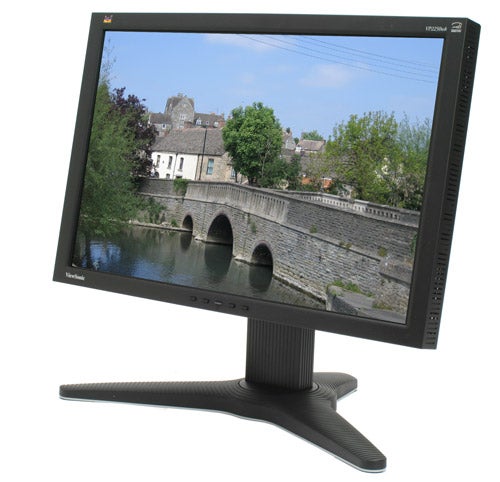 
With the VP2250wb, ViewSonic has designed a monitor that falls short of the high expectations its marketing might suggest, since slight colour shift and bad backlight bleed means professionals may be better off looking elsewhere. But if you are a casual graphic designer, this monitor will do you proud. And, considering it is only £40 more expensive than the 22in Pebble, you get superior ergonomics and build quality supporting a great screen for general use, especially for gaming and movies.