After the debacle that was ViewSonic’s VMP30, we’re cautious about the company’s new VMP74 Full HD Network Media Player. Like the VMP30 it promises to be one of the better media players around, but anyone who read the review of the older model will know it was impressive on paper yet failed spectacularly in practice. Let’s see if the VMP74 (known as the VMP75 in the US) can restore our faith.


Its spec-sheet is certainly enough to stir plenty of anticipation. Along with support for less common video file formats such as MKV and MOV, it offers eSATA connectivity, wired networking, YouTube, BBC iPlayer and Samba, and even internet browsing with mouse and keyboard support.

Included in the neatly packaged box is a colour quick-start and connectivity guide, a plain 1.5m HDMI cable, 3.5mm to composite video and audio cable, a slightly large power adapter and full-size remote with batteries. This is a decent bundle as it includes everything you really need to get started.


Unlike its predecessor’s sweet combination of brushed metal and soft-touch plastic, the VMP74 is a predominantly piano-black plastic affair, meaning fingerprints, dust and scratches accumulate easily. It’s a fairly anonymous and simple piece of design, but that’s really what you want and the compact dimensions (132 x 101 x 28mm) and solid build quality are very pleasing. Moreover, as there are no moving parts, the VMP74 is totally silent and only gets slightly warm in operation. 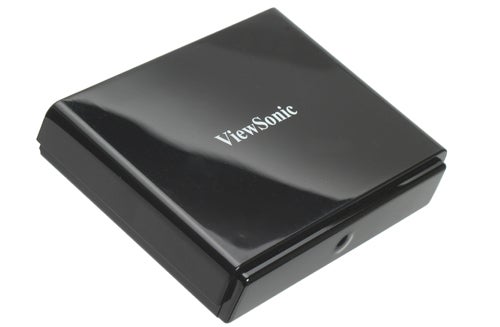 All the connections and the power button can be found on the rear I/O panel. Here you’ll encounter a small, tactile green power button and a fairly generous range of audio, video and data connections. HDMI 1.3 is joined by a 3.5mm AV output for composite video and audio, which gives a distinct advantage in that it can also function as a headphone jack, and there’s an optical digital audio port thrown in for good measure. We would have liked to have seen high definition component video-out for those with older televisions, but the VMP47’s AV connectivity is still vastly superior to VMP30’s.


Separate USB and USB/eSATA ports provide ample data connectivity, though their close proximity means a large device will block the other port. ViewSonic isn’t alone in offering eSATA, as the Asus O!Play Air HDP-R3 also features it, and it’s a good addition when dealing with large files provided you have compatible storage. Unlike the HDP-R3 ViewSonic’s flagship unit doesn’t offer a memory card reader, but you can always hook one up over USB.

Despite its titled emphasis on networking, the VMP74 doesn’t offer Wi-Fi either, instead relying on an Ethernet port. However, you would have trouble streaming Full HD video files over Wi-Fi anyway, and wireless functionality can be added through a separate USB dongle if you want it, with a list of compatible dongles available from ViewSonic.

Much like the A.C. Ryan Playon!HD Mini, this ViewSonic bundles a full-size remote. Unfortunately it’s far less attractive than the small, muted matt black affair that accompanied the VMP30, with a glossy top leading to plenty of fingerprints and white buttons giving a slightly toy-like impression. However, it’s also far more practical. It runs on AAA batteries so you can easily use rechargeable ones, its layout is spot-on with each button logically positioned and clearly marked, and it lies comfortably in the hand with its matt underside offering a secure grip.


Turning the VMP74 on reveals an attractive side-scrolling main menu with large, colourful icons. While not quite as sharp and clean as the interface found on the Western Digital WDTV Live HD, it’s nonetheless one of the better interfaces around, even if we do wish ViewSonic had gone for two rows of four rather than one continuous line of eight icons. 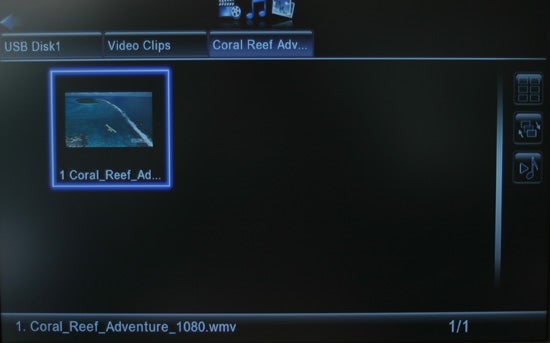 Tabbed folder browsing is an especially neat touch and one we haven’t come across before. It makes switching instantly to anywhere in a long directory string child’s play, and we hope other media players will adopt it. Another great feature is that pressing the ‘info’ button at any stage changes the folder view, similar to Windows or OSX, with several views offering video previews within icons which load reasonably quickly. These touches raise the ViewSonic’s interface above that of most rivals.


There are plenty of options in the ‘Setup’ menu, where you can alter video, audio and network/sharing settings, as well as media playback (like choosing your preferred audio or subtitle language for ‘DVD’ playback, or adjusting slide show transitions and timing). For display settings you can choose various resolutions, aspect ratios and turn scaling on or off. Interestingly, you can also alter brightness, contrast, hue and saturation – even when connected over HDMI. Audio settings allow you to choose between analogue or digital output, and to select DTS, AAC, Dolby or WMA Pro throughput. 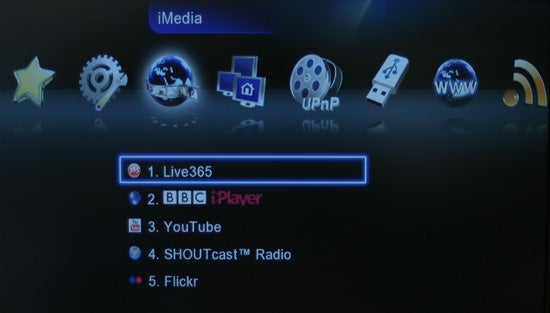 Next up is ‘iMedia’, which gives access to the VMP74’s online services that comprise BBC iPlayer (the US gets Netflix instead), Live 365 and SHOUTcast (online streaming radio), YouTube and Flickr. You can access most websites and services through the built-in browser, but it’s nice that dedicated modules are provided. iPlayer, for example – which uses the BBC’s ‘big screen’ browser interface – works very well indeed once you get past some sluggish menus.


ViewSonic’s media player is unique among those we have reviewed in offering a usable web browser. Navigating and text-entry using the included remote is clunky and slightly frustrating, and the virtual keyboard doesn’t help much – but fear not; USB keyboards and mice (including wireless sets) are supported. Unsurprisingly web page rendering can be a little slow and formatting can be inconsistent, but provided you use peripherals rather than the remote it’s an alternative.


One other feature that adds some unique flair to the VMP74 is a weather applet that’s always visible on the main screen (along with the time and date). Superfluous, maybe, but nice all the same. The RSS reader, meanwhile, works pretty much as expected. ‘Terastation’ provides access to network shared folders and the VMP74 is UPnP compatible, so you can pull media from a NAS box or PC connected to the network. 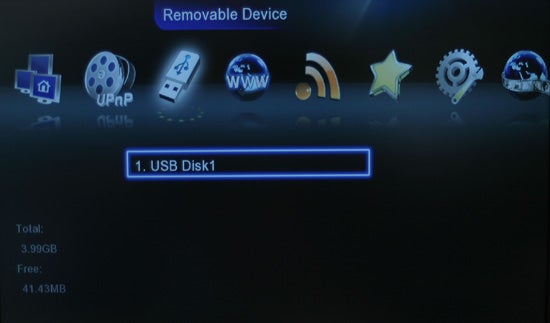 There’s a ‘Favourites’ menu where you can set up background music to have your preferred tunes playing while browsing, watching slideshows, etc. Last but not least, ‘Removable Device’ lets you browse external storage connected locally over USB or eSATA, with support for FAT, FAT32 and NTFS. In another nice touch, you’re given the used and free capacity of any device without needing to go into sub-menus.

Format support is abundant, as the VMP74 utilizes the same Advanced Sigma Designs 8655 processor that can be found in both the Eminent EM7075-DTS and Western Digital WDTV Live HD. For video you get AVC-HD, H.264, MPEG1/2/4, VC-1, WMV9, DivX and Xvid in most containers, including AVI, ASF, ISO, M2TS, MP4, MPG, MKV, MOV, TS, TP, VOB, WMV, IFO and DAT with SRT, SMI, SSA, AAS, IDX, SUB and TXT subtitles (meaning it supports more subs than any other player we’ve looked at). 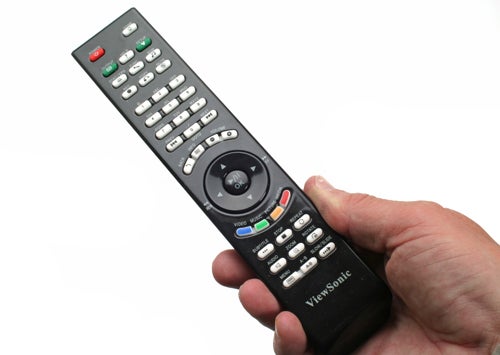 The 8655’s only significant video limitation is its lack of RMVB and FLV support, so if those are something you want you’ll have to opt for the Asus O!Play Air HDP-R3 or the award-winning A.C. Ryan Playon!HD Mini. Audio-wise the VMP74 will let you play MP2/3, OGG, WMA (Pro), WAV, AAC and FLAC, and it supports Dolby Digital or DTS pass-through. Finally for photos and images it will show JPEG, BMP, TIFF, GIF and PNG.


The best news is that, unlike ViewSonic’s ill-fated VMP30, its VMP74 actually does what it says on the tin. It played back all our video test files without issue – the only minor exception being two slight audio stutters in a 1080p .MOV trailer. Not a completely flawless performance then, but near enough as to make no difference for most users.

To sum up, this media player has more features overall than any other barring A.C. Ryan’s Playon!HD Mini, and it’s the only one we’ve come across that allows you to comfortably browse the internet. Unfortunately, at £140 it also demands a significant premium over most other media players, including the £90 Playon!HD Mini. To be honest, at this price we would seriously consider getting a tiny Atom-based PC like the Acer Aspire Revo instead, versions of which are available for as little as £160. If you do want a dedicated device or your budget won’t stretch that far, the Playon!HD Mini is still our player of choice.


Sleek and stylish both inside and out, the compact ViewSonic VMP74 Full HD Network Media Player is versatile in its features, format support and connectivity, and generally performs well. Unfortunately it just misses out on a recommendation by dint of its high price.