Competition in the media player market is really heating up. Where once features like H.264 playback were exceptions and you were lucky if the device had an HDMI port, nowadays true 1080p playback and support for containers like MKV is fast becoming the rule. Join us as we find out if new entrant ViewSonic’s VMP30 holds its own against the likes of Western Digital’s WD TV and Asus’ O!Play HDP-R1.


Things certainly start of well with the media player itself. While not as tiny as the WD TV Mini, this is not some cut-back device. Going by the spec-sheet it’s easily as powerful as the O!Play HDP-R1 yet measures just 121 x 101 x 27.5mm while weighing a mere 138g. 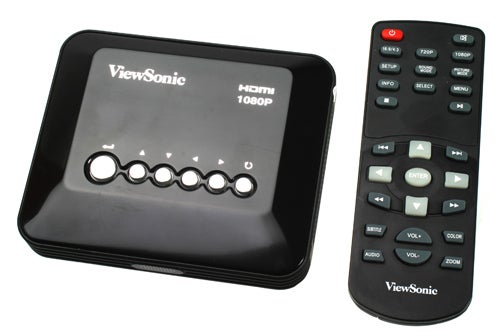 Build quality is another area where it exceeds expectations. The solid main body is constructed using lovely soft-touch plastic and the top is glossy black aluminium. This does of course pick up finger-prints, but unlike plastic equivalents won’t scratch as easily. The VMP30’s only remotely unattractive feature is an admittedly unobtrusive green LED behind a chequered panel on the front.


Unlike most diskless media players we’ve seen recently, the VMP30 has a full set of controls on the device itself so you can manage it fully without the included remote. However, while visually unobtrusive, the silver buttons are the one exception to the otherwise excellent build quality, as they’re loose and clicky.

Connectivity, all of which is found at the unit’s back, is minimal. ViewSonic has gone completely digital, with HDMI for video/audio and a proprietary co-axial digital audio output that requires the provided adapter cable to plug into your equipment.


While perfectly adequate if you’re using the VMP30 with a modern television, the lack of analogue audio outputs will be a real problem for those looking to use this media player with a DVI-only monitor (DVI can take an HDMI video signal with a cheap adapter, but doesn’t carry audio) and owners of older televisions lacking digital connectivity are also out of luck. At least ViewSonic does provide a decent quality wire-braided HDMI cable with gold-plated connectors. 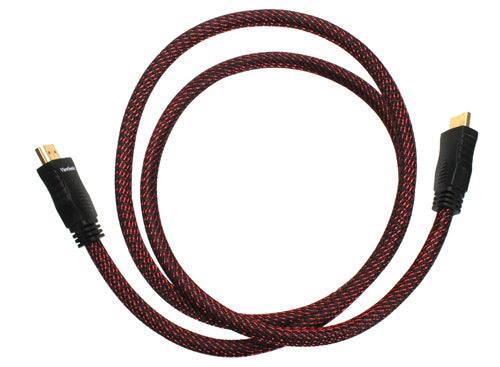 One unusual but welcome touch is the VMP30’s integrated card reader, which can take the usual assortment of SD/SDHC, MMC and MS/MS Pro. It’s handy being able to slot a memory card straight in to view your photos and movies, though we would probably have preferred a second USB port.

Unfortunately the VMP30’s remote is a bit of a mixed bag. On the positives side it’s constructed using fairly solid matte black plastic and is reasonably comfortable. Button layout is logical with clear labels and while not backlit, the main navigation buttons glow in the dark, which is a useful and unusual addition. 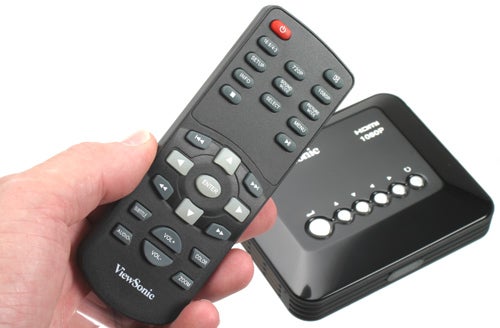 On the negatives side, the remote inexplicably eschews the ‘back’ button found on the main unit, making navigation more tiresome than it needs to be. We also can’t help but wish the remote used AA or AAA batteries (allowing you to use rechargeable ones), rather than a CR2025 cell battery.

Getting back to the media player itself, a clear and comprehensive colour Quick Start Guide includes all the basic information you could want, including how to set the device up, supported formats and ViewSonic’s contact details, though the digital user guide is not online yet.


Time to check out what’s most important though: how it performs. First off the visual interface is nicer than most – at least aesthetically. Underneath the polish hides a similarly-clunky interface as found on the Emtec Movie Cube or any of a dozen other examples. Though it’s slightly more intuitive thanks to its simple, logical layout, it simply can’t match up to the smooth experience offered by Western Digital’s WD TV and the like due to its lack of indexing into a local library. Instead you must select media by the usual Photo, Music and Movie categories. 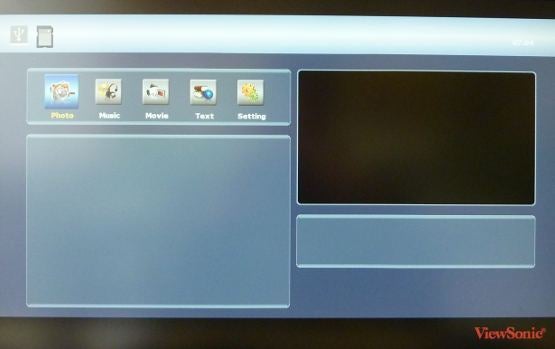 There’s also a fourth category marked Text. ViewSonic’s media player is the first we’ve come across that will display any document with the extension ‘.txt’ as black letters against a blue background. However, the usefulness of this feature is debatable. Last on the list is Settings, which is so simple that the VMP30 is a doddle to set up.

ViewSonic’s VMP30 claims compatibility with an admirable number of formats. It might only support JPEG, BMP and PNG for photos and music is limited to MP3, AAC, AC3, Real Audio and WMA (unfortunately there’s no FLAC, OGG, Dolby or DTS compatibility here), but at first glance video support makes up for this. ViewSonic’s little unit can supposedly handle MPEG 1/2/4, RealVideo and H.264 at up to Full HD resolution, meaning it will play TS, VOB, AVI, Xvid/DivX, DAT, RM/RMVB, MOV and MKV video files at up to 1,080p with SRT or SSA subtitles.

Indeed, a selection of standard definition MOV and MKV files played just fine, as did RMVB. It was when we started getting into HD territory that things began looking grim; a 1080p MOV video displayed severe artefacts before completely crashing the VMP30. At this stage it’s worth mentioning the small physical on/off switch at the base of the unit, which we were forced to use a lot during testing as the media player would crash on a regular basis and even the remote’s power button wouldn’t affect it.


Reckoning a 1080p MOV might be pushing things, we consequently tried a 720p MOV, which crashed after running with artefacts and stuttering. A 1080p MKV refused to play altogether and the VMP30 has an annoying habit of just playing the next file it can handle instead of telling you there’s a problem. A 720p MKV played a few seconds before crashing, as did a 720p MP4. Basically every HD file we tried (including DivX and AVI) displayed severe artefacts, stuttered, skipped, froze or just crashed the whole unit. 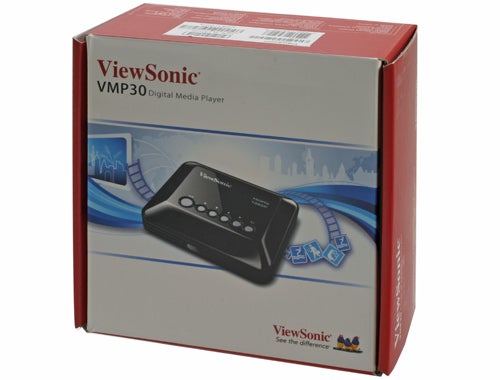 Thinking this might be a problem with early firmware, we contacted ViewSonic, who informed us that no updates are planned. However, we were told that the maximum bit-rate the VMP30 could handle for H.264 and MPEG-4 files was 20Mb/s. Frankly this is incredibly low and makes the player unsuitable for most common HD video files. It did explain our failed tests though, as crashes generally occurred at points where the variable bit-rate went above this figure.


With its impressive overall build quality, decent looks and small footprint plus claimed support for so many video formats, we really wanted to like ViewSonic’s first media player – especially since with an MSRP of £60 (and street prices likely lower) it would have represented excellent value for money. Unfortunately, the niggles with the remote and interface, combined with the VMP30’s complete inability to play back the HD formats it claims to support in most real-world scenarios, make it one to avoid. 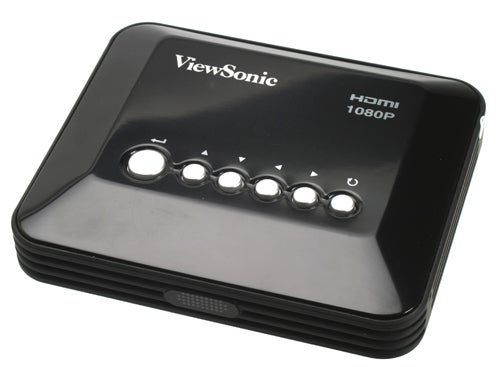 In effect it’s somewhat similar to the WD TV Mini, which costs the same but simply doesn’t claim to play the HD files the VMP30 does. Additionally the Mini supports more audio and image formats than the ViewSonic and has a more polished interface, but on the other hand the VMP30 supports more standard definition video formats and offers a digital video output, so choosing between the two depends on your priorities.


Ultimately, though, we wouldn’t go for either. Unless ViewSonic manages to fix the VMP30’s issues, the original Western Digital WD TV or better-featured Asus O!Play HDP-R1 are still the way to go if you’re looking for a media player.


Despite the ViewSonic VMP30’s positive first impression, there’s little to like here as, contrary to its claims, the unit can’t realistically handle high definition video files.