ViewSonic showcased several new products at the event we attended yesterday, but the most exciting of these were undoubtedly the American company’s new tablets, the ViewPad 7 and ViewPad 10. Both offer attractive looks, more features than you could shake a stick at and some nice extras, so should the Apple iPad and Samsung’s Galaxy Tab be shivering in their metaphorical boots? As we’ve already given you an extensive look at the ViewPad 7, we’ll instead concentrate on the ViewPad 10. 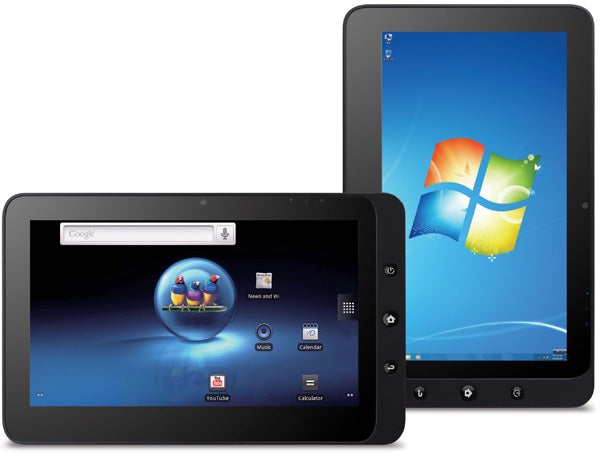 In terms of specifications, the ViewPad 10 is actually closer to a netbook than a mobile phone. As its name suggests, it features a 10in screen, making it slightly bigger than the 9.7in display of Apple’s famous tablet. Unfortunately its resolution isn’t as high at 1,024 x 600, but this is hardly surprising as it is identical to that found on practically every netbook and affordable tablet around. Potentially its most exciting feature though is that is will dual boot into either Android or a full-fat version of Windows 7!


In terms of looks and design, the 10 is one classy device. Its glass-fronted screen is perfectly integrated into a glossy black bezel vaguely reminiscent of the iPad’s, with a brushed aluminium back completing its premium look and feel. The bezel is kept clean but for three menu buttons, subtle status indicators and an unobtrusive 1.3megapixel webcam. It felt very sturdy in the hand too, though as a result is quite heavy at 835g (the Wi-Fi iPad weighs only 680g). 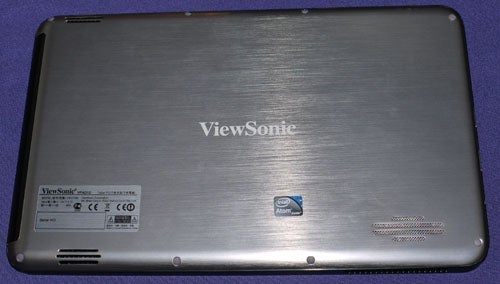 When it comes to specifications there is quite a bit of power under the hood. For processing duties we have an Intel Atom N455 CPU, which runs at 1.66GHz and is almost identical to the N450 found in most netbooks (like the Samsung N230). The main difference is that it actually uses more power, consuming 6.5 instead of 5.5 Watts – go figure.


It’s backed up by 1GB of DDR3 RAM and Intel’s integrated graphics, again equivalent to most netbooks. However, for permanent storage there’s a 16GB SSD. While not great by portable hard drive standards, this is plenty for a tablet and means no moving parts, less heat, no vibration and a higher likelihood of your precious data surviving – not to mention longer battery life. You can of course add more storage (up to 32GB) using the microSD card slot.

Connectivity, meanwhile, is good by tablet standards. Two USB 2.0 ports allow you to plug in anything from external storage to peripherals, while a mini-VGA port can output video to a TV or monitor. On the wireless front we have both Wi-Fi N and Bluetooth 2.1, though no 3G (that’s reserved for the Android-only ViewPad 7).

Where the ViewPad 10 – and indeed the vast majority of other tablets – really can’t compare with the iPad is in screen quality. Rather than the latter’s IPS panel, with its excellent viewing angles and great contrast, here we’re back to good old TN. This manifests itself in relatively poor viewing angles lesser contrast and colour. That said, from the right angle, it’s still quite nice to use.


An inbuilt G-sensor automatically orients the display to landscape or portrait. The capacitive multi-touch screen is sensitive and feels pleasant, and we had no problem navigating our way through Android. 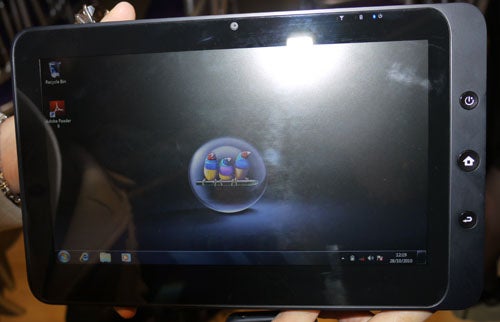 Unfortunately, you’re restricted to Android version 1.6, which is truly ancient by now. This is not ViewSonic’s fault; it’s actually a restriction imposed by Intel on any device that uses its processors. We can only hope the chip-maker will ease this requirement, as otherwise you may be permanently stuck with an outdated OS – though you can always try to ‘hack’ a newer version onto the ViewPad, of course. One limitation you won’t get around is the lack of access to the Android App store, though you can still install applications manually.


To switch between operating systems you’ll need to reboot the tablet. Things are looking brighter on the Windows 7 front, as you don’t get some cheap Starter Edition, but rather the fully featured Home Premium version. This is by no means as smooth an experience as Android, however. It’s not that the hardware can’t cope, it’s that Windows was never designed from the ground up to be navigated by touch. However, this situation is much alleviated if you’re near a desk, as you can simply plug a mouse and keyboard in to use Windows the ‘way it was meant to be used’.

We were given no battery life figure for the ViewPad 10, but with a 3,200mAh capacity battery, we can guestimate you would get at least five hours of use out of it. Unfortunately, the bigger tablet doesn’t come with a protective leatherette case like its smaller sibling.


Pricing is intriguing. At £499 MSRP, it is (shock, horror) more expensive than the Wi-Fi only iPad. However, while its build quality and screen might not be up to the same standard, it does offer a boatload more features and options, which cost a lot of extra money on Apple’s tablet – if they’re available at all. Also, the fact that you can actually use this ViewPad as your main PC (if you’re a light user, and when hooked up to a monitor, mouse and keyboard) does give it a significant advantage. Nonetheless, at that price we still think it’s too much. 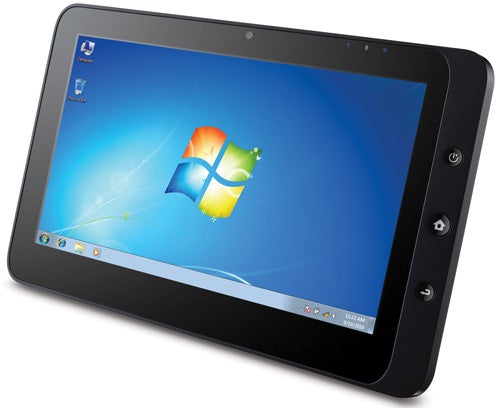 However, if you already own an old netbook, ViewSonic also runs a cool trade-in scheme, which we already talked about earlier today. Though the rebate of £135 also needs to cover postage, you’ll still be getting the ViewPad 10 for under £400, which makes it a much more tempting proposition. However, purely as a tablet, we are more taken with the ViewPad 7, which we will give you additional details about along with those of a new projector, 3D camcorder, and 3D monitor in an upcoming article covering the rest of Viewsonic’s showcase.