Those who follow the technology industry will know that ViewSonic has long been associated with monitors, both CRTs and more recently LCDs. As that market has become increasingly difficult, however, the company has sought to branch out into a number of new segments. We’ve already seen some fruits of its labour, such as the VPD400 Portable Media Player, VPC100 All-in-One PC and the VMP30 Digital Media Player, but the ViewSonic ViewBook Pro we’re looking at now is the first laptop we’ve seen from the company. 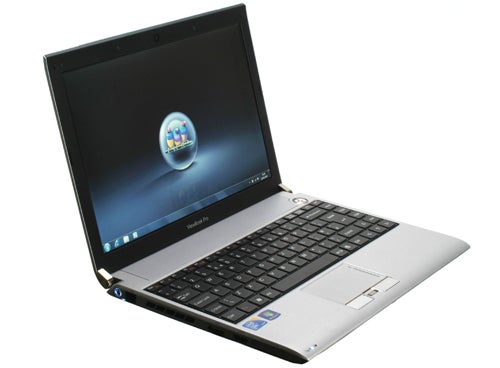 It’s a 13.3in portable laptop which, despite weighing just 1.65kg and measuring 17-25mm thick, features an integrated optical drive. Clearly ViewSonic has taken some liberal inspiration from several quarters in creating the ViewBook Pro. Its name, of course, is somewhat reminiscent of Apple’s MacBook Pro and even the packaging and the ViewBook’s promotional website (US version) have more than a little bit of Cupertino about them. Subtle it is not.


Unsurprisingly, however, ViewSonic isn’t in the position to ape Apple where the actual laptop is concerned. Here it has taken its cue from the Toshiba Protege R600, known for being the lightest laptop in the world back when people actually cared about such statistics – it’s all about being thin these days! This is probably a better fit as ViewSonic’s stated target market is “professionals”. 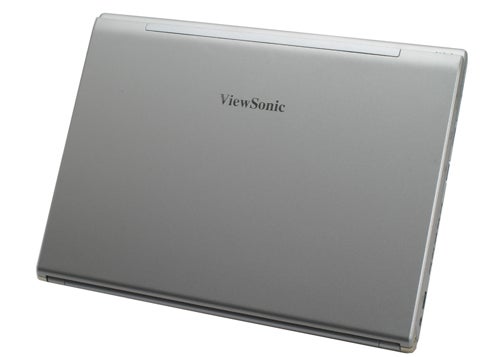 As such the design of the ViewBook Pro is really quite conservative. Our version is shod in matt silver inside and out, though there’s also a black version that actually retails for some £23 less. This all-silver cladding is only interrupted by the black screen bezel, which is attached to the body of the machine via two faux-chromed hinges. Some well-placed curves and the exceedingly slim 25mm height create a nice sense of sleekness, but otherwise it’s merely a solid, as opposed to exciting, chassis.


It also shares the slightly flimsy, tacky feel of the Protege R600. Its plastics feel thin and slightly coarse, while there’s a segment on the top edge of the screen that you can easily lift up with your fingernail. In fairness, however, the ViewBook Pro feels reasonably well screwed together, albeit with one or two little quirks. Moreover, considering it houses an integrated optical drive – not a given where slim, ultra-portable laptops are concerned – the ViewBook Pro’s 1.65kg weight is very low. 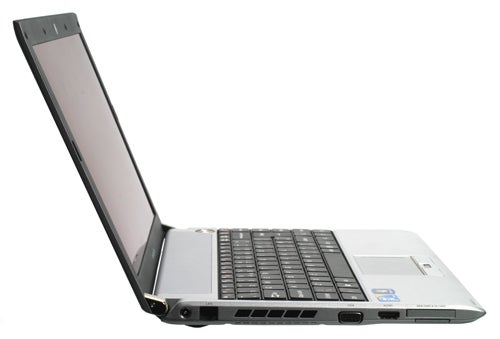 To emphasise the ViewBook Pro’s more professional outlook, ViewSonic has also included a couple of security features. One is the obvious fingerprint reader that’s nestled between the two touchpad buttons, but the other is more left field – a theft alarm. It’s activated using a button that occupies one quarter of the otherwise circular power button, which then locks the laptop (still running) until you enter your password. If your laptop is moved when in this mode an alarm sounds, alerting you or anyone in the vicinity. It’s pretty crude and we wonder how effective or useful it really would be, particularly as the machine must remain on for it to work, but it might do enough to scare someone off.

Inside the somewhat plagiarised chassis it’s no surprise to see one of Intel’s increasingly popular CULV processors. It’s an Intel Core 2 Duo SU7300, which has two 1.3GHz cores sharing 3MB L2 Cache. This is one of the faster CULV options, but it’s paired with only 2GB of DDR2 RAM and a 32-bit version of Windows 7 Home Premium. Upgrading could prove tricky, too; there’s only one SODIMM slot and there’s a warranty voiding seal over one of the (many) screws. This machine is crying out for an access panel for the RAM. 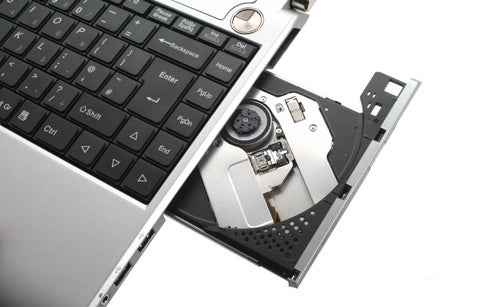 For storage you get a generous 320GB, 5,400rpm hard drive, which benefits from fall detecting motion sensors to aid hard drive protection. Other sundries include Wireless-N Wi-Fi and Bluetooth 2.1 +EDR, though the wired networking is of the slower 10/100Mbit variety. Graphics is the usual frugal yet weak Intel GMA 4500M, though the 13.3in screen it powers bucks the modern trend in sticking with a 16:10 aspect, 1,280 x 800 native resolution.


Connectivity on the ViewBook covers the basics, but isn’t overly generous. Both HDMI and VGA are present, which is a plus, but you only get two USB ports and they’re sat right next to each other – a potential problem for large USB devices if you want to use both ports at the same time. In addition you’ll find two audio jacks (one headphone-out, one mic-in), a multi-format memory card reader, a 34mm ExpressCard slot and an Ethernet port.

Where things go a little further awry is with the input devices: the keyboard and touchpad. Starting with the former, things start off fairly well – it’s got a sensible layout and the keys are large and usable. Unfortunately the key actions are muddy and imprecise, with a hint of irritating rattle thrown in too. It’s still okay to use and is a far cry from the dreadful keyboard on Medion’s Akoya E3211, but the likes of the HP Pavilion dm3-1020ea take it to the cleaners.


As for the touchpad, it’s not that bad, but the surface – like the chassis as a whole – feels a little rough. Its two buttons are fine, though, not lacking for definition even if their response is a little uneven.

Returning to the 13.3in screen, we found it outstanding in some respects but slightly mediocre in others. Its viewing angles are extremely wide, right up there with the likes of the Apple MacBook and MacBook Pro – in fact, we wouldn’t be surprised if it was the same panel. It’s also very bright and, when the brightness is brought down a shade, it produces a nice pure black. Equally its white-level is very clean compared to most laptop screens.


However, much like the MacBooks, it’s seemingly tuned to compress dark shades and slightly over-blow lighter ones. As a result, it’s superficially a very rich, colourful screen, but struggles to bring out finer details. At its brightest there’s also some very obvious bleed from the LED backlighting, though reducing the brightness to 80 per cent does tune this out. 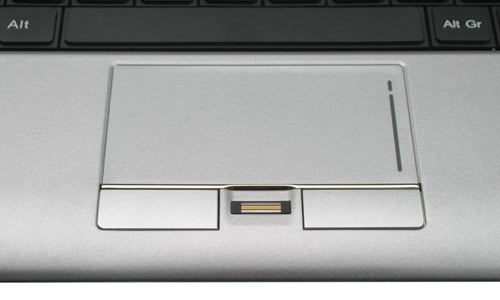 On reflection, though, we’d happily take some of its weaknesses to enjoy its wide viewing angles and crisp look. We can also report that the ViewBook has speakers. They’re really bad, but they are there.

As we’ve seen from previous Intel CULV laptops, the ultra-low voltage processors generally offer very decent performance for the price – certainly good enough for general computing tasks and a far cry from netbooks. This is doubly the case (literally) with the dual-core iterations, since the single-cores ones – as seen on the Medion Akoya E3211 and Toshiba Satellite T130-11H – are really quite limited. 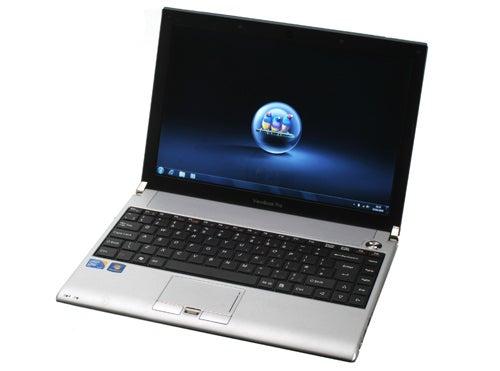 However, this shouldn’t be a problem with the ViewBook Pro since it uses the higher-end dual-core option, the SU7300, which adds 3MB L2 Cache to the 1.3GHz core-clock speed. Subjectively it performs fine, but due to the relatively (in modern terms) small amount of RAM and lack of a 64-bit OS, it’s actually comfortably beaten by both the Acer Aspire 1810TZ and the HP Pavilion dm3-1020ea in our PCMark Vantage benchmarks. We wouldn’t say this difference is totally representative of what you’ll see in real-world use, but in the strictest sense the ViewBook Pro doesn’t perform as well as either.


Of course it’s not a gaming machine by any stretch, as its feeble 12.5fps in the Trackmania Nations tests attests. Since the ViewBook Pro doesn’t support our usual resolution for this test (1,366 x 768), it was run at its closest equivalent (1,280 x 800), which is technically slightly lower.

Finally we come to arguably the most important factor for any ultra-portable laptop: battery life. As standard the ViewBook Pro comes with a six-cell, 4,400mAh battery. Handily, the ViewBook also employs a feature you’d normally see on more expensive business laptops: the optical drive can be replaced with a secondary battery. One of these isn’t provided as standard (though you do get a blanker) and as yet we’ve been unable to find anyone selling such batteries. However, ViewSonic has given us an SRP of £28 excluding VAT for the black and silver versions of the batteries.


As for the provided battery, in the Productivity segment of MobileMark 2007 it managed 265 minutes (four hours, 25 minutes). This is a good result, but not an outstanding one, for a low-voltage laptop. It’s close to 30 minutes less than the HP Pavilion dm3 and doesn’t come anywhere near to the Acer, which lasted 523 minutes – slightly less than double. It’s a shame ViewSonic doesn’t include the extra battery really, as it would doubtless add a great deal of value (and battery life) to the system overall. You should be able to watch most films on a single charge, though, as the ViewBook lasted close to three hours in the DVD playback test. 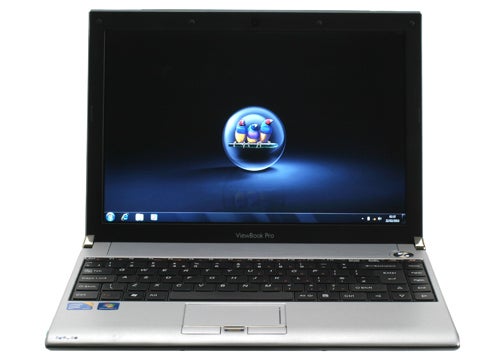 
ViewSonic has done some interesting things with the ViewBook Pro. It’s got a great screen, has a comprehensive (sometimes eclectic) feature set and offers an integrated optical drive when others don’t. It’s let down, however, by a slightly unrefined chassis and a poor keyboard. A little more RAM would be nice, too.

(centre)Subjectively the ViewBook performs okay, but in our tests it is let down by the relatively meagre amount of RAM and lack of a 64-bit OS.(/centre)

(centre)For an ultra-low voltage system the four and a half hour battery life is good, but not outstanding.(/centre)