Viewsonic may be a name that’s most readily associated with computer monitors, but the company has in fact tried its hand at a number of different types of products over the years including media players, all-in-one PCs, projectors and more recently laptops. With lots of hype surrounding ebooks in general and especially products like the Kindle from Amazon, the company has decided to have a crack at creating an electronic reader too. The result is the VEB612, but by pricing the reader at around £250 Viewsonic has set itself a tough tasks if it is to beat off competition from products like the impressive PRS-300 from Sony, especially as that reader can be picked up for just £160 now. So the question is, does the VEB612 provide you with any reason to go for it over Sony’s model? 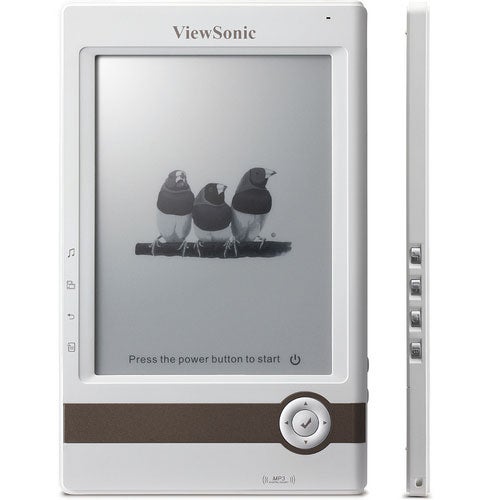 The VEB612 doesn’t look all that different to most ebook readers currently on the market. Rather than the aluminium finish used on Sony’s recent models, the VEB612 is finished in a white plastic that reminded us a little bit of early iPods. At 127 x 203 x 9mm it’s quite small and the plastic construction means it’s light too weighing just 180g. As a result it’s quite comfortable to hold even for prolonged periods of reading. We also like the fact that Viewsonic has included a white leather-effect carrying case with a magnetic clasp on the front to protect the reader when you’re carrying it around in a bag or rucksack.


Naturally the screen takes up most of the front face of the reader, but on the bottom right hand corner there’s also a four way direction pad that has a select button in its centre. Viewsonic has added a further four buttons down the left hand side of the device. These are used to start the MP3 player, switch the screen orientation from portrait to landscape, call up context sensitive menus and move back through menus. The only other buttons are the power switch located on the top edge of the reader and the volume controls that are positioned on the right hand side. 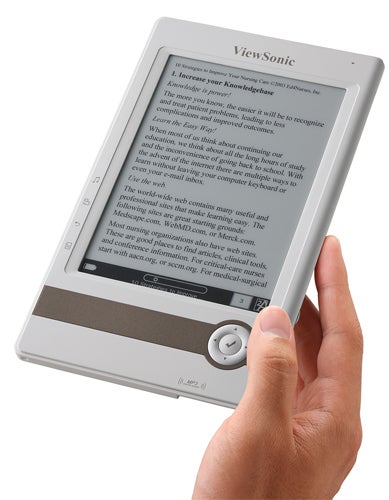 On the bottom of the player you’ll find the MiniUSB port which is used for charging the reader and syncing it with a computer. Viewsonic doesn’t provide any syncing software with the reader, so instead it appears as a mass storage device on your computer and you simply copy files across. Next to the USB port there’s the headphone socket, but unfortunately this is a non standard 2.5mm jack. However, Viewsonic does provide a short adaptor in the box so you can use it with a normal pair of headphone. You’ll probably make good use of this adaptor as the included headphones are very cheap and nasty.


The top of the VEB612 is home to an SD card slot. Though the 512MB of onboard memory is enough to store thousands of books, you’ll probably want to add an SD card if you’re planning on loading it up with lots of music or graphics heavy PDFs. The slot only supports cards of up to 4GB in size so it’s unlikely to replace your dedicated mp3 player but it’s enough for adding a few dozen of your favourite albums.

Flip the VEB612 over and you’ll find the reset button hidden in a pin-hole plus the battery cover which is held in place by a tiny Philips headed screw. Opening this reveals the removable Li-Polymer 100Mah battery. As with all ebook readers, battery life for the VEB612 is measured in page turns as the device only draws power when it’s redrawing pages on the screen (or playing music of course). Viewsonic says that the battery on the VEB612 is good for around 8,000 page turns, which in real life usage means it’ll keep running for around two weeks. This compares well against the likes of the Sony PRS-300, which has a quoted battery life of 6,800 page turns. 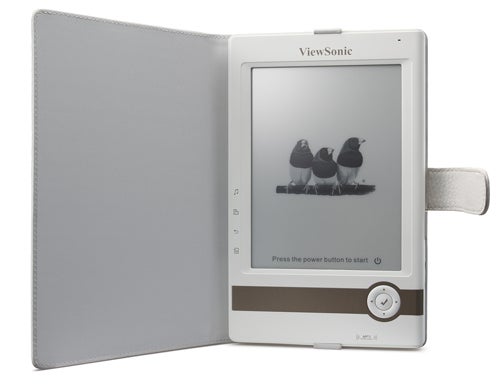 Of course, one of the most important aspects of any reader is its screen. The VEB612 has a six-inch screen with a resolution of 800×600 pixels that’s capable of showing eight levels of grey scale. Text and images look reasonably sharp, but due to only being able to display 8 levels of grey, images aren’t rendered as nicely as on other models that support 16 levels. As with other ebook readers the display uses E-Ink technology. This is much easier on the eye than traditional LCD technology due to its lack of backlighting and static display (once drawn, the image stays perfectly still) The result is a display that’s probably as close to the printed page as you can get, in terms of readability. However, E-Ink displays do have draw backs as they are quite slow to refresh as you turn a page. Like all E-Ink based readers the VEB612 takes around a second or two to turn a page as it first has to blank the screen and then draw in the new image of the page. Overall, though we have few complains about the display as it’s very easy to read, even outdoors under direct sunlight.


Unfortunately the VEB612 starts to lose the plot when it comes to its user interface and software. As the device relies almost totally on its direction pad for user input moving through long menu lists (and there are plenty of them!) can quickly become tedious, especially given the E-Ink display’s relatively slow refresh rate. It’s a shame, as if Viewsonic had added numbered buttons to the edge of the screen, as Sony did on the PRS505, it would have alleviated part of the problem because these buttons allow you to jump directly to individual menu entries.

Also the device’s format support isn’t great. It can only deal with TXT, PDF, HTML, ePub, HTML and PRC formats, whereas many of its rivals also support the RTF, Word and BBeB formats. But this isn’t the only issue, as the software is also quite buggy. The layout on PDFs tended to go a bit skew with the device rendering text at the wrong size or randomly shifting images to the wrong place in the layout. The bookmaking feature didn’t always work properly either and the MP3 player was particularly troublesome often skipping over parts of tracks. Worse still, when music is playing the reader slows to a crawl.


There’s no denying that the VEB612 looks quite attractive, has a good E-Ink display and impressive battery life. However, the buggy software and relatively high £250 asking price mean you’d need to be one sandwich short of a picnic to opt for this over something like Sony’s cheaper, but more much more impressive PRS-300.