As well as being the cheapest of the new generation of bargain '4K' DLP projectors, the ViewSonic PX727-4K is one of the best.

The ViewSonic PX727-4K is the first projector to offer a claimed 4K resolution for less than £1000. An achievement made all the more impressive by the fact that, despite its price heroics, it’s actually pretty good.

The ViewSonic PX727-4K looks a little busy – but it’s kind of cute with it.

For starters, it’s small enough to sit comfortably on a coffee table and still leave room for crisps and dips. Plus, its rounded edges give it a friendly, domesticated look. The thin yellow line that surrounds the lens housing stands out nicely against the otherwise crisp white finish. As do the silvery 4K and ViewSonic logos emblazoned onto the projector’s top edge. 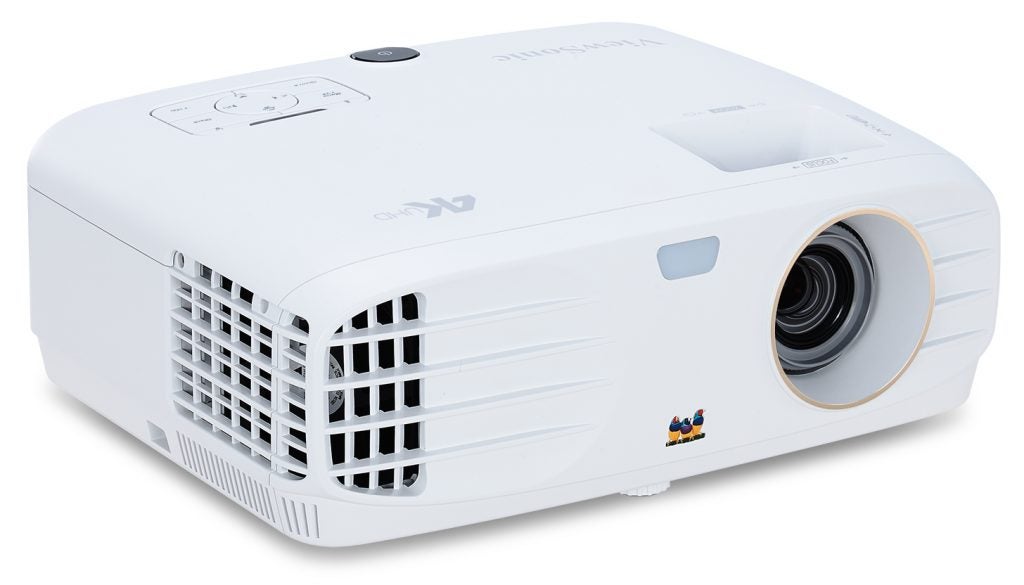 The lens itself is offset to one side, and recessed into the PX727’s front edge to protect it from damage.

The rather stark vents on the opposite side look a little clumsy; but the heat generated by the 330W lamp has to be disposed of somewhere.

Given the projector’s price, the fact that the PX727-4K’s bodywork is made pretty much entirely of plastic isn’t a surprise. Nevertheless, the housing is robust, of a nicely finished plastic that certainly doesn’t scream ‘this is the cheapest 4K projector ever’.

The PX727-4K’s remote control is small but comfortable in the hand. It features a mostly thoughtful layout. The buttons are large and well labelled too, as well as being backlit in a cool blue colour to aid use in dark rooms.

Offering a 4K resolution for less than a grand is clearly the ViewSonic PX727-4K’s headline attraction. However, we need to be clear that its 4K claims aren’t quite as straightforward as you might imagine.

As with all affordable 4K projectors that use DLP technology, the PX727-4K doesn’t actually carry 3840 x 2160 native pixels. Instead, it achieves its 4K resolution claims through “pixel shifting”. In other words, it “reflashes” the mirrors on its DLP chipset multiple times per frame and shifts the image slightly with each “flash”. In the PX727-4K’s case, a native pixel count of 1920 x 1080 is shifted three times to create a 4K effect.

The first 4K DLP projectors to emerge last year were using double-shifting on native 2716 x 1528 pixel counts. This matters, because it means they delivered smaller pixels than the PX727-4K can manage. Thus, a superior sense of resolution, definition and ‘purity’ next to the PX727-4K.

Of course, Sony’s truly native 4K projectors can deliver far smaller pixels than any of the affordable DLP solutions. But prices start at £4,995…

None of this means that the PX727-4K is flat-out fibbing about its 4K capabilities. In fact, the Consumer Technology Association in the US has ratified the DLP approach as being truly 4K. Just note that not all 4K projectors are the same, and that the differences will likely be visible –especially on a super-sized screen.

The ViewSonic PX727-4K uses a fast RGBRGB colour wheel that works in tandem with a dynamic lamp control system to allegedly expand the projector’s colour range – as well as improving contrast and detail.

In addition, the light engine inside the PX727-4K claims to produce a promisingly bright 2200 lumens. This, together with the claimed colour enhancements, enhances the PX727-4K’s claims of being HDR compatible.

Brightness is only one part of the picture quality story. As such, it’s good to see ViewSonic also claiming a respectable contrast ratio of 12,000:1 for its budget beamer. That’s around 10% higher than the figures typically quoted for sub-£1500 4K DLP projectors. 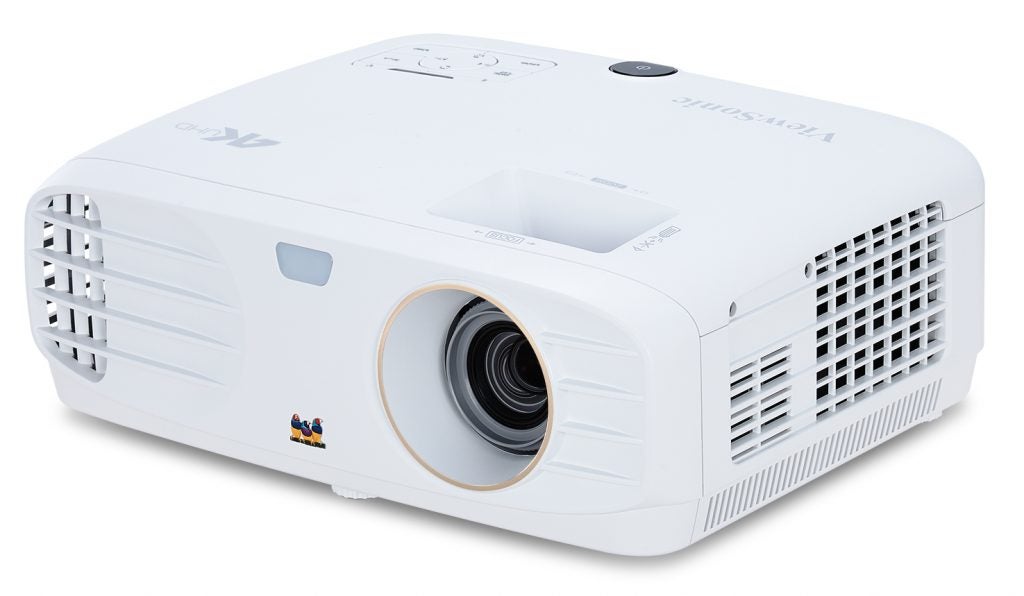 The ViewSonic PX727-4K carries a built-in 10W speaker, so you don’t have to find an external sound system every time you want to use it. However, there’s only one speaker, so don’t expect any stereo effects.

The PX727-4K provides a surprisingly long list of picture adjustments for such a cheap projector; these are covered in the Setup section below. As far as connections are concerned, the PX727-4K includes two HDMIs, one 3.5mm audio input, a D-SUB PC port, an RS-232 system control port and a 12V trigger. The trigger port can be used for, say, firing up an electronic screen when you switch on the projector.

Note that as is usual with budget 4K projectors, only one of the HDMIs is capable of handling 4K sources.

One of the ViewSonic PX727-4K’s more unusual features is a MoviePro menu, containing “Super Resolution”, colour enhancement and skin tone adjustments. I didn’t really see much impact from the colour and skin tone options, but Super Resolution is worth setting to its three or four level for a slight increase in sharpness without generating noise.

Also worth exploring are three EOTF settings, or Electro-Optical Transfer Function. This lets you choose between detailing in the brightest parts of HDR pictures and baseline brightness levels. 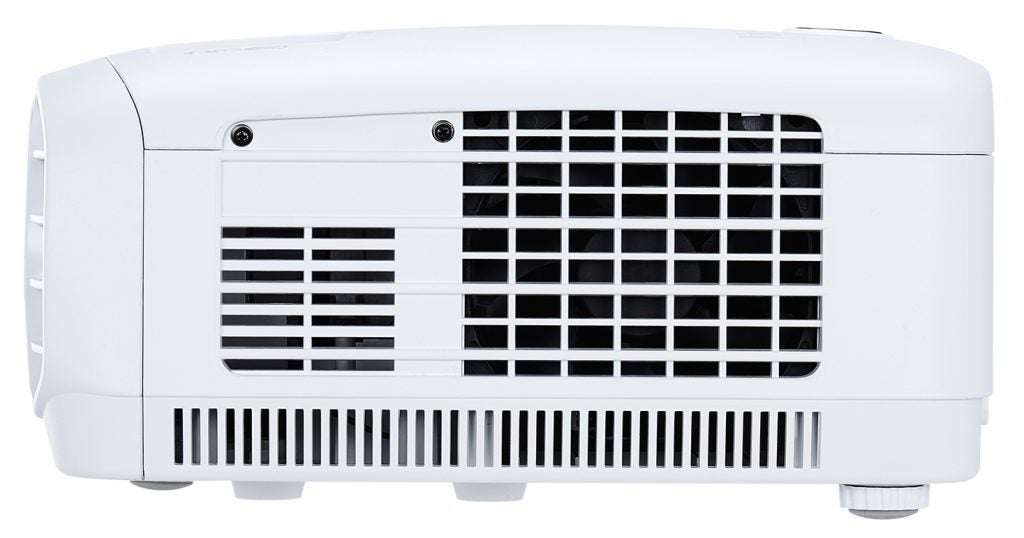 Personally, I found the Low setting delivered the most balanced image. The High setting left colours looking washed out, while the Mid setting compromised black levels. Regardless, it’s nice to have a choice – especially given the varying room environments ‘casual’ projectors such as this can find themselves in.

The ViewSonic PX727-4K also provides a long set of picture presets. The Bright option should be avoided, though, due to the hefty amount of Cyan tint it introduces. Movie mode is a little dark, leaving Standard to deliver the best contrast balance.

When it comes to the projector’s lamp mode, Eco is your best bet for SDR viewing. It boosts black levels substantially and minimises fan noise.

For HDR viewing, both the Normal and Dynamic settings display pros and cons. I settled on Dynamic, since it delivers the all-round most punchy, convincing picture. However, be aware that this mode makes the image look slightly less stable than the normal setting, and can also impact fan noise, since it keeps changing in line with increases and decreases in the lamp output.

The Normal lamp setting is more consistent and doesn’t affect fan noise, but its HDR pictures are less punchy and balanced. One other little tweak worth doing is setting the projector’s Gamma to 2.3 for HDR, and 2.2 for SDR. 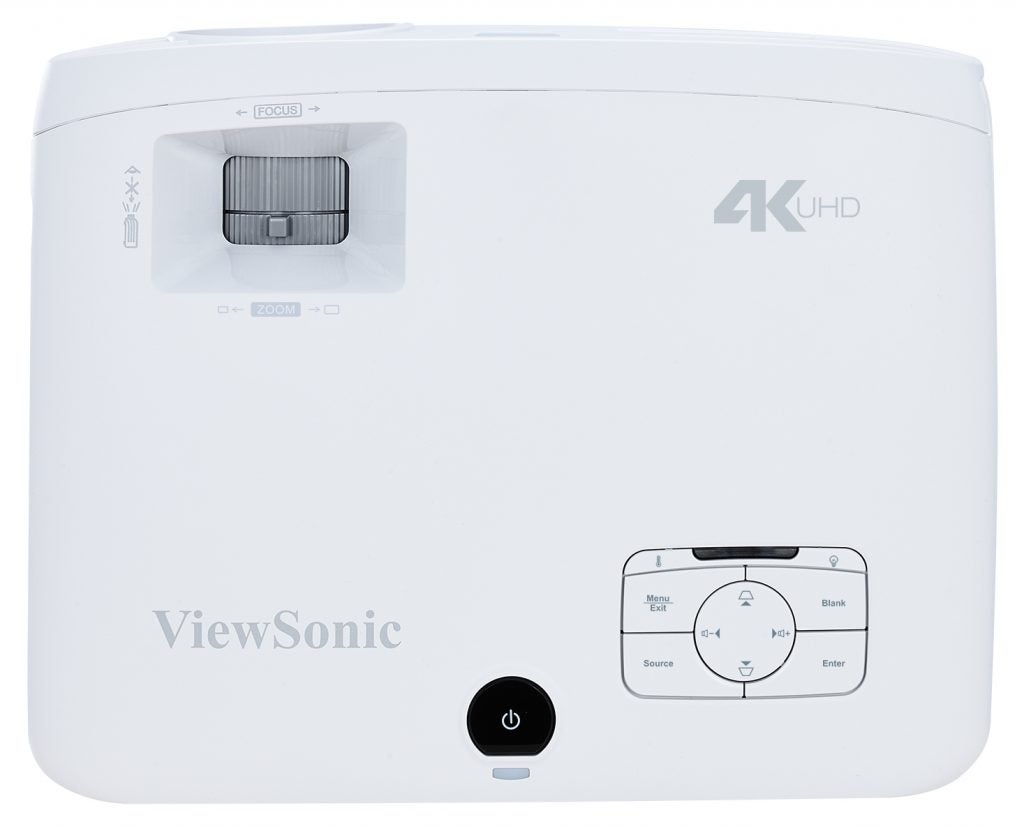 Provided you’re realistic with your expectations, the PX727-4K’s pictures are far from the ugly mess you may have expected for the price.

Its colour performance is particularly effective. Follow our set-up advice above, and colours look surprisingly rich and dynamic, yet also natural and balanced – even when watching high dynamic range sources.

I’m not saying that the PX727-4K can deliver the sort of colour range you’d expect from a decent HDR-capable TV; if the PX727-4K really does creep beyond the old standard dynamic range Rec 709 colour space, it isn’t by much. But at least it maps the wide colour ranges associated with HDR content to its own capabilities surprisingly well.

Fine colour blends are handled with levels of precision and finesse that elude most budget DLP projectors. This helps objects in the picture feel more three dimensional, which in turn enhances the image’s sense of depth. This is especially true with native 4K sources.

The surprising quality of the ViewSonic PX727-4K’s colours is particularly welcome when it comes to skin tones. There’s hardly any trace of the plasticky finish, orangey tones or blocking/banding artefacts you tend to get with affordable projectors.

The PX727-4K isn’t bright enough to do full justice to HDR. But then neither is any other projector – even those models costing five figures. With projectors, HDR is essentially a case of trying to manage it rather than really unleashing it. 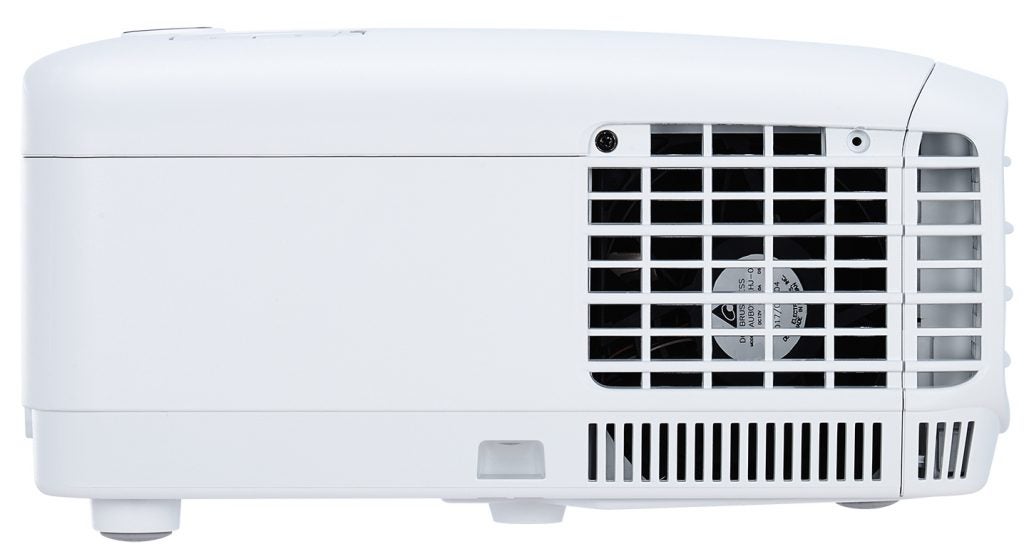 Within that context, the PX727-4K actually manages HDR surprisingly well. It has just enough brightness to stop dark HDR areas from looking oppressive and hollow. Also, as noted in the Setup section, there are options to stop the brightest HDR areas from becoming bleached and artificial. Colours look balanced and well saturated in bright HDR areas.

All of this counts as a good HDR result for any affordable projector – never mind the cheapest 4K projector ever released.

Despite its lack of a true 3840 x 2160 pixel count, the PX727-4K really does make 4K sources look like something at least approaching the real 4K deal. You can clearly see tell-tale 4K signs such as facial pores, strands of hair, and the weave in clothing.

The picture isn’t quite as sharp as some other 4K DLP models, and certainly not as rich in detail and clarity as Sony’s native 4K models. But there’s visibly more resolution than you’ll see with other HD projectors in this price category.

In yet another unexpected result, the ViewSonic PX727-4K retains its beyond-HD sharpness when there’s motion on display. Judder and blur are both kept in check, despite the projector lacking a powerful video processing engine.

Even considering its relatively high brightness, the PX727-4K continues to deliver beautifully natural and refined standard dynamic range pictures. And finally in the plus column, it doesn’t suffer as much as I’d feared with DLP’s ‘rainbow effect’, where red, green and blue stripes can flit over bright parts of the picture.

The ViewSonic PX727-4K’s pictures can’t completely escape the constraints of its price, however. For instance, dark scenes expose a pretty uninspiring black level response. Parts of pictures that should look black instead tend to look a fairly pronounced grey – especially when you’re watching HDR sources. This greyness can flatten the tones of dark colours, too.

In addition, the projector takes around 50ms to render picture data, which will be a touch high for serious video gamers.

The PX727-4K also exhibits traces of fizzing noise in very bright areas caused by its DLP engine, and the sound from its speaker is too thin and weedy to be considered anything more than a last ditch fall-back.

While they provide some context to the ViewSonic PX727-4K’s ground-breaking price, most casual projector users shouldn’t consider them deal-breakers.

If you have a grand to spend on a projector, the ViewSonic PX727-4K is definitely worth consideration. Partly because it’s currently the only way you can get 4K support for so little money, but also because it’s a much better all-round performer than you might expect for the price.

At this price, the ViewSonic 4K projector is certainly worth considering. A fantastic all-rounder.