If there’s one thing we hate feeling as technology reviewers, it’s confused. Yet that’s exactly the emotion we’ve come away with after spending the past few hours with ViewSonic’s Pro8400 projector.

The thing is, it was ‘sold’ to us as a home cinema projector. An idea underlined by its appearance on ViewSonic’s UK website, where it appears in the ‘Precision Series’ section reckoned to bring ‘high-end performance and style to home entertainment’.

However, it’s quickly apparent that while we can just about see a use for the Pro8400 in very specific home entertainment scenarios, it really feels much more like a business/presentations projector than a living room one.

Looks wise, for instance, it’s a bit of mess. With a glossy bit of black plastic over its rear half and matt black/grey over its front half, a startlingly big lens hanging out of the right front side, a rather random downward curve on the front upper edge and a grilled finished to the sides and front, there’s just too much going on. 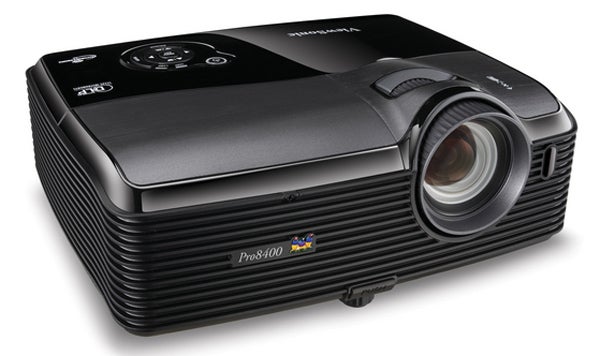 The best thing about the Pro8400’s physical form is that it’s small and light, making it genuinely portable – especially as it ships with a well-made carry case.

The Pro8400’s connections impress to the extent that they have two v1.3 HDMI sockets on board for HD video use. Home users might also like the onboard 12V trigger port and the fact that there’s a USB port through which you can play slide shows without needing a PC. However, with one or two notable exceptions, USB ports tend to be staples of the business projector world more than the home one. And in the Pro8400’s case, the businessy feel is reinforced by the appearance of not one but two D-Sub PC inputs, and a LAN port through which you can schedule, manage and monitor the projector remotely, or even receive email alerts about the status of the projector’s lamp. These sort of connections are far more likely to be of use in a networked business environment than a typical home one.

Adding further to our confusion about what the Pro8400 is really designed to do are its key specifications. For while its native 1920×1080 ‘full HD’ resolution bodes well, we’re much more concerned about its claimed dynamic contrast ratio of 3000:1 and claimed maximum brightness output of 4,500 Lumens. 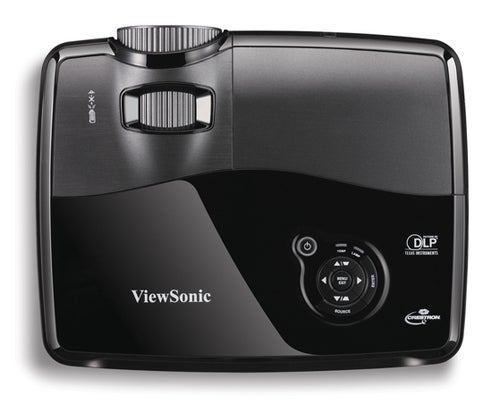 The brightness figure seems crazily high for a projector supposedly aimed at domestic users. Even the phenomenally bright Sim2 Crystal 35 model ‘only’ managed 2,500 Lumens. As for the dynamic contrast ratio, 3000:1 is one of the lowest figures we’ve seen on a home entertainment projector costing more than £1000.

In fact, seeing a brightness output that high alongside a contrast ratio that low makes us wonder if the Pro8400 will be able to deliver any sort of contrast/black level performance at all.

Setting the Pro8400 up is helped by a decent 1.5x level of optical zoom, but badly hindered by the lack of any vertical image shifting. This means that for many/most people, the only simple way to get an image on their screen with straight edges will be to use the projector’s digital keystone correction system. Which means, essentially, that they will have to distort the picture rather than being able to watch it in the perfect pixel for pixel way that surely is the whole point of having a full HD projector in the first place.

It’s commonplace for sub-£1000 projectors not to have vertical image shifting, but we’d definitely expect to see it on a projector costing a fair bit more than £1500. At least if that projector was really a true home entertainment model, anyway…

Heading into the Pro8400’s passably presented menus, there’s a solid amount of picture set up tools. A series of picture presets head things up, which tellingly include Theater, Dark Room, Bright and a couple of User modes, but no ‘PC’ mode. The presets intriguingly suggest that ViewSonic really is serious about its home entertainment claims for the Pro8400, even if little else points in that direction so far.

There’s a reasonable amount of colour adjustment too, in that you can adjust the balance of the red, green and blue elements, as well as choosing from simple high, mid and low colour temperatures and individually tweaking the hue, saturation and gain values for the RGBCMY colour set. 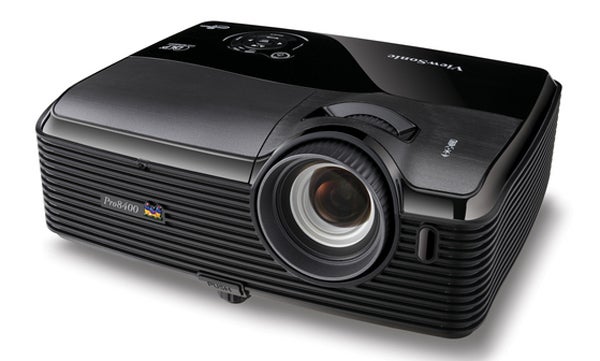 There are also six different gamma settings; various power saving and Eco modes (again more common on business projectors, but no less welcome on a supposedly home one); separate manual and auto keystone options; and set up options for the LAN/optional wi-fi features and the 12V trigger jack.

Settling down to watch the Pro8400 in action, three things immediately leap out at you about its pictures, and only one of these three things is actually good.

That bit of good news finds images looking brighter than we’ve ever seen projected images look from anything like as affordable a projector. This gives video and console game pictures huge amounts of punch, and allows them to be watched reasonably successfully in a fairly bright room – something that can’t be said of many other affordable projectors.

The first bit of bad news is that the Pro8400’s high brightness has the unfortunate effect of highlighting a common failing of single-chip DLP projectors: the rainbow effect. Wherever a bright object appears against a dark background on the Pro8400 you can invariably see tell-tale stripes of red, green and blue over them, caused by the colour wheel required by single-chip DLP systems. You can also see the striping effect if you happen to flit your eyes around over the image.

The Pro8400’s rainbowing is even more pronounced than it was on the recently reviewed Acer H5360BD projector – but at least that Acer model had the considerable excuse of only costing under a third of the price of this ViewSonic model.

To be fair, you seldom see the rainbowing issue on the Pro8400 if you’re watching a predominantly bright, colourful scene. But it’s hard to think of any film – even an animated one – that doesn’t have at least a few dark scenes in it. And whenever these appear, the rainbowing is likely to really distract you from what you’re watching – unless you happen to be one of those lucky souls who appear completely immune to its effects.

The other instant problem noted with the Pro8400’s pictures is that, as feared, the brightness/contrast balance just isn’t right for satisfying movie viewing or gaming. Dark scenes tend to look washed out and grey, with little attempt at producing a convincing black colour – even if you’ve got the projector’s lamp set to its lowest output level.

Thanks to this inability to really go black, the Pro8400 also tends to hide away shadow detail, making dark scenes look hollow and out of kilter in depth terms with bright scenes.

A smaller issue with the Pro8400’s pictures is that HD sources don’t look exceptionally sharp. There’s not quite the clarity of texture or film grain with our favourite HD test material that we ideally like to see on full HD projectors. This is a relatively minor niggle, though, and in some ways we’d rather have the Pro8400’s ever so slightly soft finish than the sort of forced detail that can so cause pictures to look noisy.

The lack of noise in the image happily extends to its motion, as the Pro8400 handles everything from 50Hz to 24p successfully in terms of judder, while also avoiding the fizzing noise over motion – especially moving skin tones – that can afflict single-chip DLP projectors.

Now we’re in a more positive frame of mind, after a bit of work you can also get a likable combination of vibrancy and naturalism from the Pro8400’s colour palette, and there’s more subtlety when it comes to rendering fine colour blends than you see from bargain bucket models.

Finishing up on another strength, the Pro8400 also runs surprisingly quietly considering how bright it is – so long, at any rate, as you avoid the ‘Bright’ setting and try where possible to stick with the Dark Room preset.

Verdict
The Pro8400 isn’t totally without its charms, we guess, since its extreme brightness for its price could make it worth considering for people who fancy projection-sized images but can’t be bothered with blacking out their rooms.

However, given the lack of other AV charms to go with the brightness – most notably, the inadequate contrast and the preponderance of DLP’s rainbow noise – we’re struggling to imagine any of the Pro8400’s potential audience wanting to spend north of £1600 on such a casual-use machine.

In the end we can’t shake the feeling noted right at the start of this review that the Pro8400 is only a ‘home entertainment’ rather than a business projector because ViewSonic has decided it is, not because it actually behaves like one.