Let’s kick things off with a couple of numbers – one surprisingly big, one surprisingly small. The big one is the 3000 Lumens of brightness ViewSonic’s Pro8300 projector can churn out. The small one is the £909.60 price we’ve seen this projector going for. Such a combination of figures has simply never been seen before on a projector clearly described in its marketing materials as being capable of delivering ‘home entertainment’.

As soon as we received the projector for test, though, it became apparent that ViewSonic had perhaps been a bit optimistic with its home entertainment claims for the Pro8300. For the words ‘Business Projector’ are writ large across its box. Ah.

Business as usual
This wouldn’t be the first time ViewSonic has tried to claim universal usefulness for one of its high-brightness projectors, and the discovery that it appears to be first and foremost a business model quickly explains the high brightness level and low price combination. After all, business projectors are all about cheaply dishing up enough brightness to cut through the harsh lighting of your typical board room. Such key home theatre concerns as lots of contrast and a natural colour palette usually sit very low down on a business projector’s priority list. 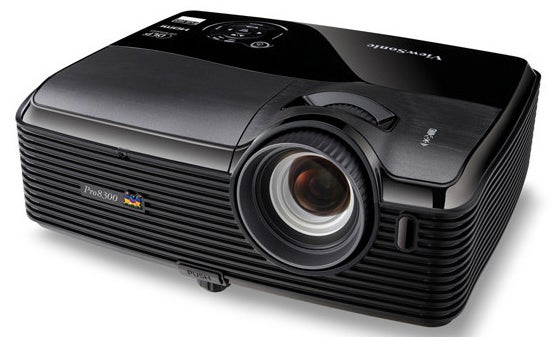 Trying to put our professional heads on and ignore the feeling that ViewSonic had oversold the Pro8300’s home cinema charms to us, the product itself actually ever so slowly managed to win us to its cause. A bit. And only once we’d actually figured out what that cause was.

For starters, it’s not a bad looking device for something not expressly designed with living rooms in mind. Its mixture of matt and gloss top panels is striking without looking fussy, and its got enough curves to avoid being just another dull black rectangle.

Even the vent grilles that wrap right around the projector’s body manage to look vaguely stylish rather than purely utilitarian.

These latter jacks feed into two 10W – 10W! – speakers built in to the Pro8300’s chassis, to provide a convenient option to having to connect your sources to some kind of external audio sustem. Obviously there are pretty significant issues with having sound coming out of a projector – not least the fact that it means audio appears potentially many metres away from the pictures it’s supposed to be accompanying! But while having speakers built-in will be of zero interest to movie fans, they could just about pass muster as a convenient audio accompaniment to a social sports-viewing occasion.

In fact it’s here that the Pro8300’s appeal, if it has any, will lie. For there’s a growing market out there – especially at the moment, with an insane summer of sport imminent – for ‘casual’ projectors designed for only occasional use in less than ideal room conditions.

By less than ideal conditions, we’re talking, of course, about rooms that aren’t completely blacked out. For any switched-on lights or uncurtained windows will inevitably greatly reduce the brightness and impact of any projected image. With this in mind, the Pro8300’s 3000 lumens of brightness suddenly starts to make all kinds of sense.

Casual projectors also tend to be put away in a cupboard when not in use, rather than being left permanently installed somewhere. So another key aspect of casual projectors is that they need to be easy to set up – and again, for the most part the Pro8300 again fits this bill, using simple screw-down legs to adjust the angle of projection, and featuring fuss-free and surprisingly robust-feeling zoom and focus rings around the lens barrel. There’s even an auto keystone adjustment for straightening the sides of your picture.

No optical image shift
Mind you, the fact that an auto-keystone system is necessary at all is unfortunate. For it reveals that the Pro8300 doesn’t carry any vertical image shifting, leaving you having to tolerate your pictures being digitally ‘reshaped’ by keystone processing unless you’re able to get your projector positioned at exactly the right height to make keystone correction unnecessary. 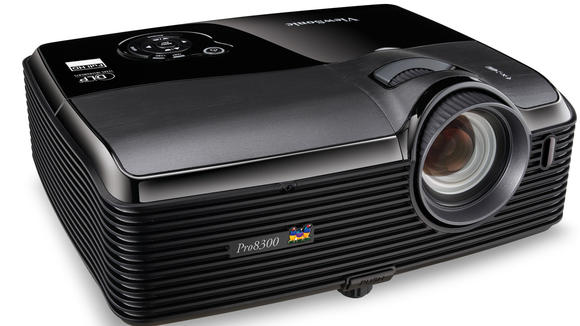 Surprisingly for such an affordable projector, the Pro8300 has a few picture calibration tools up its sleeves. Among the highlights are a series of colour presets that include a Theater mode; a simple low, mid and high colour temperature adjustment; and a colour management system that allows you to adjust the hue, saturation and gain for each of the six primary colours.

The point at which the Pro8300 really got our attention, though, was when we fired it up with most of our test room lights still on. For its pictures remained not just very watchable in the light, but actually genuinely eye-catching.

An illusion of contrast
Despite using our normal, neutral, zero-gain test screen fabric, pictures from a connected Sky receiver erupted off the screen with real vim, as strong colours combined with potent peak whites and even what at this stage appeared to be a credible contrast performance. This latter sense of contrast is particularly striking, and is the ultimate testimony to just how extraordinarily bright for such a cheap projector the Pro8300 really is. We’ve seen other ‘casual’ projectors recently, such as the Epson 850HD and the Panasonic AH1000, but these haven’t quite had enough sheer light ‘punch’ to portray bright content with so much aggression that they’re able to leave dark areas actually looking dark rather than grey and wishy washy. 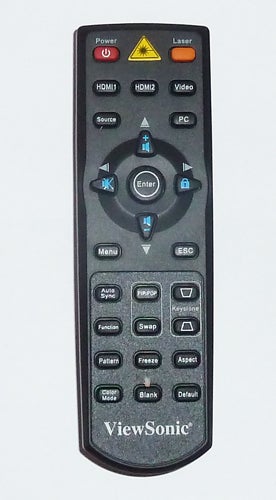 In case it didn’t come over clearly in the previous paragraph, the key point here is that the appearance of a credible black reproduction in light room conditions from the Pro8300 is in reality merely an illusion, created by the extreme brightness of the light picture elements throwing the ‘dark’ bits into apparently starker relief.

Watching a mostly dark scene with the lights on immediately exposes this illusion, as you suddenly struggle to spot anything going on in the image at all. But for bright, colourful stuff like football matches or Olympics events, the lack of any ‘real’ black level response isn’t a big concern at all.

Sharper pictures than expected
More good news finds the Pro8300 producing HD footage with surprising sharpness for such an affordable projector. Heck, even standard definition doesn’t look the soft, mushy mess we might have expected, courtesy most likely of the surprising inclusion of a PixelWorks video processing system.

Colours, meanwhile, although much more notable for their vibrancy than their subtlety or even tonal accuracy, feel curiously suited to casual viewing conditions where it’s raw ‘poke’ rather than nuance and finesse that matter. We would strongly urge you to avoid the ‘Brightest’ picture preset, though, as this really does take pushing colours way too far. Standard or Theatre are much better options.

Also handled more credibly than we would have expected is motion. Judder is fairly minimal, and blurring is practically non-existent. There is a ‘but’ here, though. For while most motion looks decently clean, skin tones or orangey/pinky colours such as the sands of the tennis courts at Roland Garros can break down into quite overt ‘fizzing’ noise as they move across the screen – especially during camera pans.

Wheel of misfortune
This artefact is caused by the colour wheel inside single-chip DLP projectors, and was once common. But it’s been quite a while since we saw the problem looking quite so overt as it does on the Pro8300. Especially if you use either the Brightest or Standard presets. (Thankfully it diminishes considerably using the Theatre and, especially, Dark Room presets.)

It’s impossible not to reflect from this that the Pro8300 is expected to be predominantly handling the relatively static footage of a PC presentation rather than the motion-filled antics of a typical film. 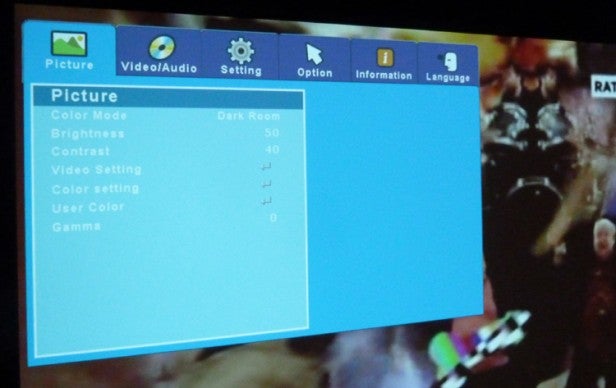 Thankfully the Pro8300 suffers less than expected with that other great cheap DLP bugbear of the rainbow effect, where you can see stripes of red, green and blue over very bright objects or in your peripheral vision as you flit your eyes over the image. The Pro8300 certainly isn’t immune to the flaw; it’s visible for sure over notorious rainbow-inducing scenes like the black and white opening to Casino Royale. But its appearances are less common and less distracting than they often are on sub-£1000 DLP projectors.

Wherefore art thou, black level?
You might have noticed that we mentioned a Dark Room preset back there – the Pro8300’s most concerted effort, we guess, at catering for a proper serious movie ‘moment’. But the results really aren’t serious at all. For with the lights off and the curtains drawn, the only thing you’ll find yourself noticing even in Dark Room mode is how instead of a ‘black level response’ the Pro8300 has a ‘green-grey level response’. In other words, it’s completely incapable of producing anything remotely resembling a true black colour.

Shadow details are in such short supply in dark scenes when watching in proper home theatre conditions, meanwhile, that it’s almost as if they’ve been painted out of the picture by some big dirty-green paint brush. Not good.

For the sake of completeness we should add here that even bright scenes don’t look great when watched in a darkened room environment, as you become much more aware of a generally high level of noise in pictures – even HD ones.

Verdict
If you’re thinking about buying a Pro8300 as a cheap movie projector for watching mostly in a darkened room, you should think again. Fast. It’s simply not up to the job.

What the Pro8300 does do quite well, though, is serve up sports footage and even at a push animated films with so much brightness and colour richness that you can genuinely enjoy them in daylight conditions. Even if you’re just projecting onto a wall or zero-gain screen.

So while the Pro8300 is very much a one-trick pony – or possibly two if you also think you can find an excuse for using it at work – it’s just about good enough at its trick to justify a purchase if you’re well-heeled enough to splurge £900 on providing your family and friends with big-screen sporting fun over the summer without having to shut out the sun.