What is the ViewSonic Pro7827HD?

The LightStream Pro7827HD is a Full HD DLP projector that, according to ViewSonic, has been designed to be your new best friend for the upcoming season of sport. It’s bright, flexible and simple enough to set up to deliver big-screen fun even in relatively casual living-room environments.

What’s more, with a price of just £599 it’s affordable enough to potentially divert you from that new TV you may have been thinking about buying.

Aside from its slightly drab black colouring, the Pro7827HD looks pretty cool. Its sides angle in as they travel from top to bottom to create a playful profile, while the boldly labelled connection cover that juts out of the projector’s rear looks like something you’d see on a Formula 1 car. 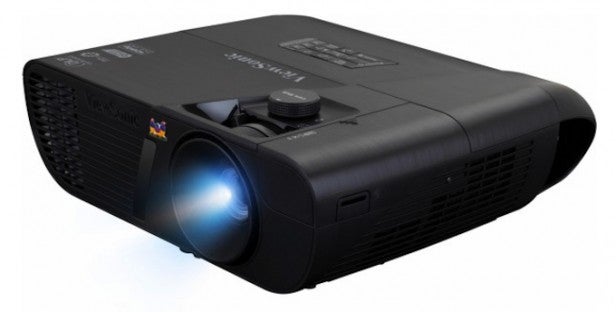 The top edge of the Pro7827HD is perhaps too crowded to be conventionally stylish with its mix of multiple logos, numerous control buttons and knobs, a detachable cover – more on this in a moment – and a cut-out access point to the lens’ focus and zoom rings. Personally, I quite like the slightly industrial feel of the busy top panel.

That detachable cover I mentioned earlier hides a handy “PortAll” bay containing an HDMI/MHL connection that also supports wireless HDMI media streaming and 5V of USB power. This means you can use it with streaming dongles such as Google Chromecast, Amazon Fire TV, the RokuStreaming Stick, and ViewSonic’s own ViewSync system.

Enabled via an optional WPG-300 dongle (around £100), ViewSync enables 1080p content from tablets, smartphones, PCs and laptops to be streamed into the Pro7827HD’s hidden HDMI/MHL port. Plus, it can be used in conjunction with a free iOS/Android “vPresenter Pro” app to enable features such as Live Cam streaming, Live Draw onscreen marking, Live TV, Content Broadcast and quad split-screen functionality.

Another interesting aspect of the WPG-300 from a business-use perspective is that you can potentially use it to enable multiple presenters to connect to the same projector wirelessly – under the control of a host – without having to swap over physical cables.

The handy thing about having all this functionality hidden in a bay within the projector’s main chassis, of course, is that you don’t have to remove the dongle each time you want to move the projector around.

The only problem with such business features is that they bring into question ViewSonic’s claim that the Pro7827HD is a great living-room projector. Experience suggests that projectors well suited to business presentations don’t usually translate well into the living room.

To be fair, though, the Pro7827HD certainly isn’t devoid of video-friendly features. For instance, ViewSonic promises that its “Cinema SuperColor RGBRGB Colour Wheel” will deliver true-to-life colours in movies that are capable of matching the sRGB and Rec 709 standards (HDR and 4K/UHD are, of course, not yet part of the budget projector world).

The Pro7827HD’s use of one of Texas Instrument’s DarkChip3 chipsets and “True Black” high-contrast technologies bolsters its movie credentials, too, while its calibration options are sufficient to earn it the endorsement of the Imaging Science Foundation as a projector that one of its engineers could professionally calibrate.

Also potentially useful for the relatively casual circumstances the Pro7827HD may find itself used in over this summer is its new “SonicExpert” technology. Based on a proprietary speaker transducer and chamber design, the Pro7827HD’s integrated sound system claims to be capable of delivering a range of sound from 20Hz to 20kHz, and provides audio presets covering video and even music use.

The Pro7827HD’s overall connectivity is impressive for such an affordable projector. It has three HDMIs (two with MHL support), which is one more than you’d usually get with any projector, even vastly more expensive ones. There’s also a composite input, a component video input, plus RS232 and RJ-45 connectors to support system integration. 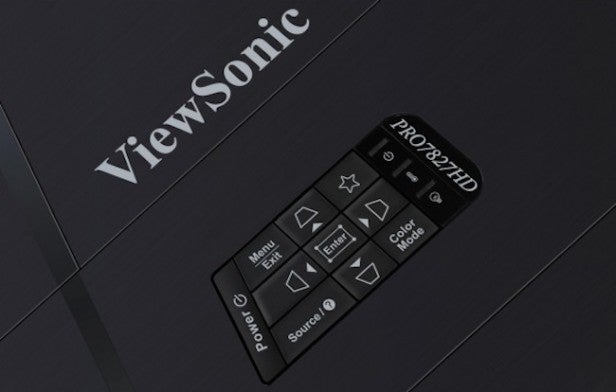 While I’ve established that the Pro7827HD uses a DLP engine and video-friendly colour wheel, it’s also worth noting that it claims a maximum brightness of 2,200 lumens. This should be enough to deliver punchy images when there’s a degree of ambient light in the room. A claimed 22,000:1 contrast ratio is also a cut above the numbers usually associated with the sub-£600 projector market.

The Pro7827HD is impressively easy to set up. The star of the show is the large knob on the top edge of the device, which lets you optically shift the image vertically up or down. Optical vertical image shifting is phenomenally useful, yet it’s seldom found on projectors costing less than £800. And it’s practically unheard of in the sub-£600 market.

The projector also offers keystone-correction options to help you get the edges of its images perpendicular, but hopefully you won’t have to use it thanks to the vertical image shifting.

In addition, the Pro7827HD’s fairly short-throw lens should prove handy in most living-room set ups, allowing you to position the projector close enough to your screen or, at a push, a wall to keep it clear of the legs of all your sports-loving mates.

There’s a passable amount (1.3x) of optical zoom, too, and the focus and zoom rings are both calibrated well enough to support fairly sensitive adjustments.

For best picture results, I’d suggest using the Rec 709 mode for dark-room movie viewing and making sure the lamp is set to its Eco mode. For bright rooms use the dynamic setting, especially if you’re watching sport.

One mode I recommend you avoid is the lamp’s SuperEco mode – bizarrely, this often makes images appear darker than the Eco mode, while simultaneously making fan noise louder. Go figure.