If you’re able to filter out the fan noise, the W800 sounds much better than you would expect from an audio spec of just 2 x 2W. The sound is clear, projects a decent distance from the projector’s body (slightly disguising, at least, the problem you always get with built-in projector speakers where the audio doesn’t sound like it’s coming from where the pictures are), and even gets reasonably loud without distorting.

There isn’t much bass around, of course, and there isn’t enough power for the soundstage to swell when asked to handle an action scene. But it’s still a cut above the sound we’ve heard from any other ultra-portable projector – notwithstanding the fact that the sound is always underpinned by the whirring of the fans when you’re using the sort of brightness setting you’re likely to want to use.

The W800 we tested appeared prone to slightly losing its focus during lengthy running sessions – perhaps as a result of the changing temperatures inside its small body. Though you’ll probably only feel the need to intervene with the fiddly focus ring if you’re dealing with presentations that use quite small text.

Anyone thinking of using the W800 as a means of enjoying big-screen gaming, meanwhile, will be pleased to learn that we measured it as suffering barely 10ms of input lag. This is an outstanding result (many projectors by comparison take around 30-40ms to render their images) that should do no serious damage to your gaming abilities. It’s just a pity that as with movie viewing, the projector’s uneven lighting can stand between you and full immersion in a gaming world.

One other point to add is that if you’re content to watch a relatively small image from the W800 – 30-40 inches, perhaps – you won’t need to set the brightness so high to enjoy a punchy image and so won’t have to put up with nearly as much running noise.

Should I buy a ViewSonic PLED-W800?

If you’re in the market for an ultra-portable projector that’s mostly or exclusively going to be for business use, then the PLED-W800 is definitely worth considering. Its document parsing and multimedia file compatibility is impressive, its built-in hard drive is a boon, and it’s much brighter than most of the small DLP/LED projectors on the market.

It’s also great that you don’t need to worry about changing its lamps, and its picture quality is in most ways good for such an affordable model. 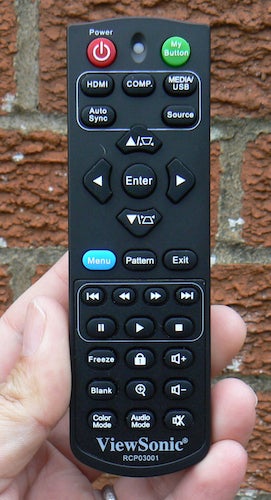 It’s just a shame that the brightness levels you need for a really enjoyable, reasonably large picture – especially with films or games – are inevitably accompanied by distracting amounts of fan noise, and that the W800’s optical system can’t deliver light consistency right across the image frame.

In some areas – colour and sharpness, in particular – the W800 sets new standards for the ultra-portable projector market. It’s a good looking, well-built, feature-packed little device too, which means it also looks decent value. However, inconsistencies with its light output and some pretty excessive running noise mean that it’s not ultimately as satisfying an all-rounder as we’d hoped.