The W800’s pictures are a mixed bag, overall – which is a pity, for at its best it looks very good.

Starting with the good news, the W800 is capable of pumping out a striking amount of brightness for such a compact unit. With the brightness increased along the lines suggested in the set up section the projector can comfortably support images up to 70-inches across without them starting to look dull. In fact, even at that size images are just about watchable even with a little ambient light in the room, which is handy for both presentations and casual home entertainment environments.

Its brightness doesn’t come, either, at the expense of all the image’s contrast. Sure, the W800 doesn’t get close to the black level response achieved by half-decent full sized home entertainment projectors, but the infusion of greyness into dark areas is at least not as aggressive and distracting as it often is on bright portable projectors. Though there is a rider to this that we’ll cover in the ‘bad news’ section soon. 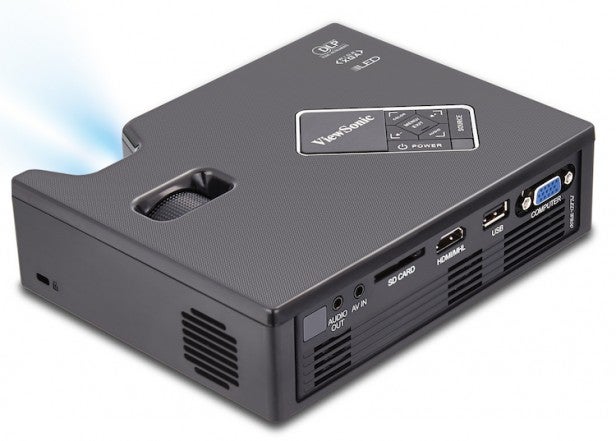 We were also pleasantly surprised by the W800’s colour handling. Unusually it’s flexible enough to suit the different needs of PC and video sources, especially impressing with the quite balanced, nuanced and natural look of the tones it delivers with video content.

The W800 does better than expected, too, at converting full HD video to its slightly lower resolution native pixel count, ensuring that images still look crisp and ‘HD’ – even when there’s motion in the frame. PC sources look sharp enough to enable you to read reasonably small text without having to squint or strain your eyes, too. Though you may need to faff around with the rather fiddly focus ring quite a bit before you get the focus bang on.

The main problem with the W800 is the consistency of its light. Infuriatingly the brightness delivered to your screen or wall isn’t even from one edge of the image to the other. Instead there are clearly delineated brightness/differentials in different areas of the picture, which prove painfully distracting during dark scenes.

To be fair, the problem is far less obvious if there’s ambient light in the room, or if what you’re watching is extremely bright. Which means it’s going to be less of an issue when you’re using the projector in a presentations environment than it is if you’re using it for gaming or watching a film. It certainly damages the projector’s claims to be as adept for home entertainment as it is for business, though, as well as suggesting that the something in the optical array – possibly the very small lens – isn’t of the highest quality.

Also irritating is the appearance above the main image area of a clear strip of light leakage. You may be able to lose this in a dark screen border if you’re not projecting onto a wall, but otherwise it’s a continual slightly distracting reminder that the PLED-W800’s lens arrangement isn’t all it might have been.

There’s occasionally a little interference from DLP’s rainbow effect too, where stripes of red, green and blue can flit over very bright image areas or around your peripheral vision. However, we wouldn’t say this occurs frequently or potently enough to be a major problem, and it’s actually less of an issue than might have been expected from such a relatively bright portable projector.

One final problem with the PLED-W800 is that by the time you’ve ramped up its brightness to a point where dark scenes contain enough detail and brightness to be watchable, the projector’s cooling fans begin to run really aggressively. In this situation the fans cause more noise than you would have thought possible from such a small box. This isn’t a great thing for either movie or presentation use.