What is the ViewSonic PLED-W800?

The ViewSonic PLED-W800 is,
according to ViewSonic, that rarest of projector beasts: a highly
practical, ultra-portable model that also sports enough picture quality
and flexibility to support both business presentations and home
entertainment use. All for the not wholly unreasonable sum – if it
delivers on its promise – of £495.

The
PLED-W800 certainly lives up to the portable part of its billing. Its
petite form measures in at just 175 x 138 x 51.5mm high –
similar to a typical hardback book. It wears its petiteness nicely too,
with its matt black finish, boldly recessed lens housing and attractive
glossy ‘diamond’ embellishment on its upper edge, which houses the
ViewSonic logo in one half and some control buttons on the other.

See also: These are the 6 best projectors currently available 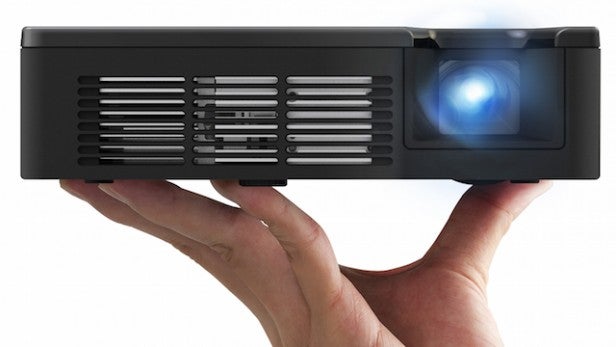 Handily,
though, you don’t have to use these buttons to control the W800. Unlike
some portable projectors this one ships with a remote control. This
lacks any button backlighting, which is a pity, but it is at least a
reasonable size, unlike those fiddly credit card-style remotes some
projector manufacturers are so fond of.

The W800’s connectivity
is respectable for a model of its type. There’s a D-Sub PC port, a USB
port, a single HDMI input, an SD card slot and two 3.5mm ports, one an
audio output and one an AV input. The HDMI is compatible with the MHL
mobile phone connectivity protocol, while the USB and SD card inputs
prove capable of handling an impressive quantity of file formats without
the need for an intermediary PC. These include PDFs, Word docs, Excel
files and Powerpoint presentations.

The projector’s file navigation system is a bit awkward initially, but you get the hang of it in the end.

Also
supported via USB and SD are video formats including AVI, MP4 and even
the MKV container with its high definition capability. Plus you can
simply hook up a Blu-ray/DVD player or TV set top box to the HDMI input
if you want to use its home entertainment talents. Impressively for its
money the W800 even supports wireless HDMI dongles, like Google
Chromecast.

The only pity where connectivity is concerned is that
there’s no built-in Wi-Fi support. If you want to send files to the
projector wirelessly you’ll need to cough up for an optional USB dongle.
However, it’s important to add that the W800 sports a reasonably
handsome 2GB of built-in memory, so you might be able to fit all the
material you need for a specific meeting directly into the projector’s
memory.

The W800 further supports its plug and play multi-purpose
credentials by carrying a built in audio system. Inevitably considering
how small the projector is this audio system won’t exactly make your
ears bleed – its output is rated at just 4W, delivered via two 2W
speakers. But we have heard startlingly small amounts of audio power go
much further than you would expect before, so we’ll reserve judgment for
now.

Turning to the W800’s picture technology, it’s a DLP system
illuminated by LED lamps – as is usually the case with such small
projectors. Its LED lamps are rated at a huge 30,000 hours – essentially
the lifespan of the projector, meaning you’ll never have to worry about
the cost and hassle of replacing any bulbs like you do with normal LCD
projectors.

The W800’s optics claim a brightness of 800 ANSI
Lumens (high for a portable LED design), while its contrast ratio is
claimed to be a startling – and doubtless hugely optimistic in
real-world conditions – 120,000:1. With figures like this it’s no
surprise ViewSonic claims the W800 can double up as either a business or
entertainment projector.

The unusually high brightness claims
for the W800 lead ViewSonic to suggest that it can deliver images up to
100in across. In reality we’d say things start to look a bit dim when
you get past around 70 inches, but even this is a very good result for
an ultra-portable projector.

The one slight fly in the
specification ointment is the W800’s native resolution of 1280 x 800. While this is decent in simple resolution terms, it works out to a 16:10
aspect ratio rather than the 16:9 aspect ratio used by today’s video
sources. However, the W800 does at least provide the option to preserve
the 16:9 ratio of video sources, placing small bars above and below the
picture, rather than just automatically stretching 16:9 pictures
vertically to suit the 16:10 pixel ratio, as happens with less
thoughtful 16:10 projectors.

The
W800 isn’t exactly overburdened with physical set up aids. There’s no
optical zoom and no vertical image shifting, for instance – though there
is a screw point on the projector’s bottom edge for attaching an
optional tripod mount.

There is, though, a simple (and rather
imprecise) inset wheel for adjusting focus, and the projector’s built-in
automatic keystone adjustment option (where the projector digitally
manipulates the picture to correct potential angled edges) works better
than most. Though as ever, if you can position the projector so that it
doesn’t need to use keystone correction you’ll enjoy slightly crisper
images.

The onscreen menus contain quite a few useful
adjustments. There is, for instance, a digital zoom capable of zooming
up to 2.25x the original image size (though you should always handle
such digital zooms with care, as they invariably lead to image quality
degradation). There’s also a series of image presets that include a
Movie mode as well as the more typical Dynamic and PC settings, plus
DLP’s BrilliantColour technology for boosting colour saturations.

If
you’re really into tinkering you can even adjust the saturation, tone,
gamma and colour temperature settings on top of the more expected
brightness, contrast and sharpness adjustments.

The single most
important advice we’d give regarding set up would be that if you’re
using the projector for gaming or movie watching you should employ a
pretty high brightness setting – as much as two thirds of the maximum
brightness range, in fact. This is based on an assumption that you’ll
want a pretty big image size of at least 60 inches, for which any lower
brightness setting simply proves inadequate, even if you’re projecting
onto a reflective screen rather than a wall.