What is the ViewSonic LightStream PJD7830HDL?

The
LightStream PJD7830HDL is a single-chip DLP projector that distinguishes
itself from the crowd by offering high brightness, a SonicExpert sound
system, a proprietary “true to life” colour system – at an
eye-catchingly affordable price of just £579.

ViewSonic aims
this model at the corporate and hospitality businesses as well as the
home-cinema market, although – based on my time with it – I’d say that
it’s best suited to gaming or movie viewing at home.

The
PJD7830HDL is a startlingly good-looking projector. Its glossy white
finish is wrapped around a bold, top-heavy chassis design featuring
seductively rounded corners and an attractive arch that protrudes above
the lens barrel. ViewSonic even provides a detachable cover for the rear
connections, so that the chic design isn’t ruined by cabling. 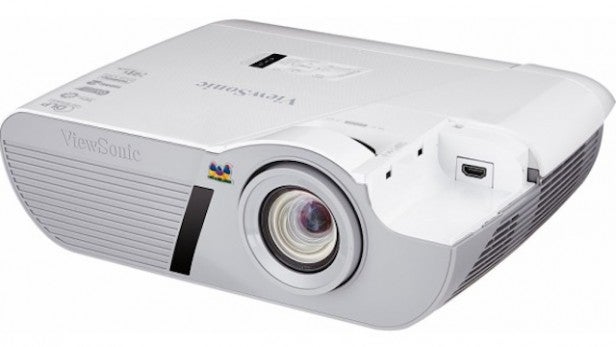 The
PJD7830HDL’s connections are puzzling – at first glance it seems as if
the projector has only one HDMI, despite a big logo on its top edge
stating that it has two.

Further investigation finds the second
HDMI tucked away under a slide-off panel to the right of the lens barrel
on the projector’s upper edge. Why here? Because it provides a bay
where you can permanently slot in an optional WPG-300 MHL-capable Wi-Fi
presentation dongle (£129), rather than having it sticking out of the
projector’s rear and having to detach it every time you want to move the
projector.

Other notable connections include a
D-sub PC port, a powered USB port capable of supporting streaming
dongles such as Google Chromecast and the Amazon Fire TV stick, and a
collection of audio ports.

Like most “casual” or presentation
projectors these days, the PJD7830HDL is equipped with a built-in
speaker for those times when you don’t have any external sound system
handy. This is no ordinary speaker, though. At 16W it’s far more
powerful than regular onboard projector speakers, and features both an
enhanced frequency range and a distortion-reducing design. 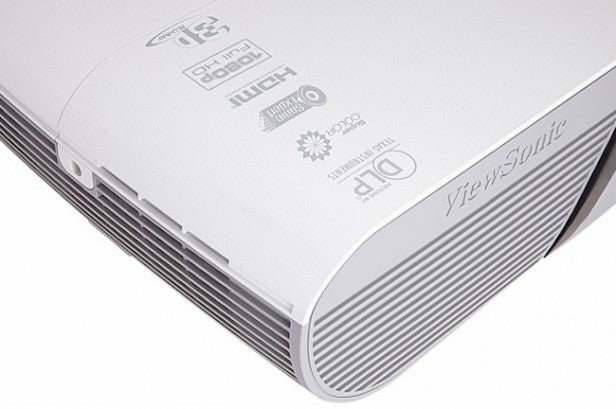 The
PJD7830HDL’s image specifications are impressive for a £600 projector.
Its brightness is rated at an extremely high 3,200 ANSI lumens, while
its contrast ratio (when using its Dynamic Contrast feature) is claimed
to be a promising 22,000:1. This raises hopes that the high levels of
brightness won’t result in excessive greyness during dark scenes.

Also
surprisingly high for such a bright projector is the PJD7830HDL’s
claimed lamp life. Even in its Normal lamp mode, it should last around
4,000 hours. If you select the projector’s Dynamic Eco mode, however,
this extends to an impressive 10,000 hours – enough for 5,000 two-hour
movies.

The PJD7830HDL also has a potential edge over its rivals
with ViewSonic’s SuperColor feature, which apparently uses a newly
designed six-segment colour wheel to deliver more natural, accurate
colour tones.

One last notable feature of the PJD7830HDL is its
support for 3D playback. However, note that it doesn’t ship with any
active-shutter 3D glasses, so you’ll have to cough up extra for these.

It
gets off to a decent start with a 1.36x optical zoom and good
responsiveness and accuracy from its zoom and focus rings.
Unfortunately, though, there’s no optical vertical image shifting to
move the picture up or down. This means many people will be forced to
use digital keystone correction to make images appear with perpendicular
rather than trapezoidal edges.

When you’re talking about images
the size of those attainable from a projector (up to 300in in the
PJD7830HDL’s case) you really want direct pixel-for-pixel accuracy, not
keystone distortions. 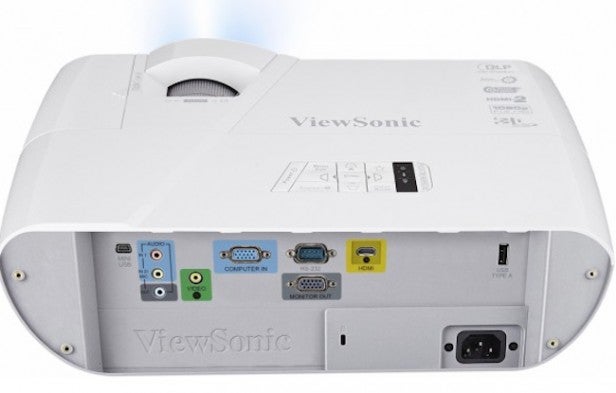 Although
the PJD7830HDL’s onscreen menus are a little small and, as a result,
look cluttered, they do at least provide you with a fulsome set
of image adjustments.

Among the highlights are gain and offset tweaks
for the RGB colour components, a series of colour presets, noise-reduction options, five gamma presets, four lamp settings
(most projectors give you only two), and a colour-management system
that lets you fine-tune the hue, saturation and gain of the red, green,
blue, cyan, magenta and yellow colour elements.

Plus, as seems to be
inevitable with DLP projectors these days, there’s also Texas
Instruments’ Brilliant Colour option, for boosting colour vibrancy.

While
all this flexibility is welcome, I found it difficult to set up the PJD7830HDL successfully. The problem lies predominantly in the
relationships between the colour presets, the Brilliant Colour option
and the four lamp modes. Adjusting any one of these settings tends to
have a greater than expected knock-on effect on the other two, making
it hard to find the best balance between them all.

For
instance, the ViewSonic’s ViewMatch colour mode generally delivers
the most natural colour effect when used with the lamp set to normal
and the Brilliant Colour option set to just two or three. But this
configuration also delivers a merely average black-level response in
dark scenes.

It also produces high levels of DLP’s rainbow effect, where
stripes of red, green and blue colour flash over bright image elements –
especially if you move your eye around the screen.

Choosing the
Super Eco lamp mode reduces this rainbow effect and improves the look of
black colours, but it also causes other colours to begin looking washed
out. You can improve things a little by boosting the Brilliant Colour
setting, but this results in a slightly forced look to some hues.

It
seems that every colour preset – bar ViewMatch – introduces
some fairly obvious green or yellow undertones to the overall colour
palette. And again, the intensity of these undertones is affected by the accompanying Brilliant Colour and
lamp settings you opt for.

The bottom line is that
skipping between all manner of combinations of the colour preset,
Brilliant Colour and lamp settings invariably resulted in pictures where something wasn’t quite right. The extent of the
issue with each setup combination wasn’t something I was able to fully
fix through the colour-management and gamma options.