What is the ViewSonic PJD7822HDL?

The Viewsonic PJD7822HDL is a home entertainment projector that uses single-chip DLP technology and is currently available for just £540. Despite its low price it claims a startlingly high brightness of 3200 ANSI Lumens and supports such handy domestic tricks as a USB charging port and compatibility with wireless HDMI dongles such as Google Chromecast.

The PJD7822HDL is an attractive little box of tricks. Its rectangular form is strikingly small and coffee table-friendly with a cute gloss white finish. The top edge carries a cool-looking double-diamond design element where the ViewSonic logo appears in one diamond while a series of control buttons appear in the other. There’s also a window cut into the top edge above the lens barrel providing access to zoom and focus rings above the lens. 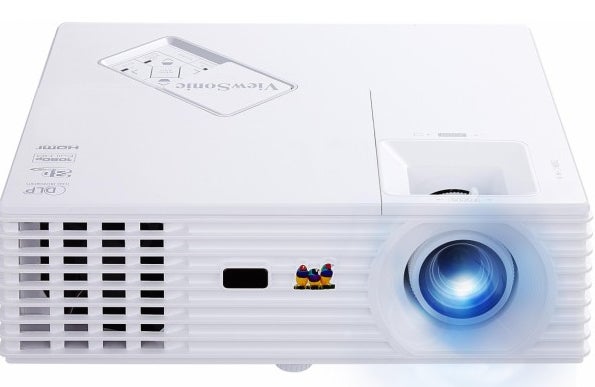 That lens is, it must be said, rather small, and we were also disappointed by how much light spills out of the projector’s body from the vents on its side, rear and even through the zoom/focus ring window on the top edge. Given that this is a short-throw projector you’ll likely have it positioned in front of you, which means all this spilled light could become quite a distraction.

It’s also a shame to see so much of the PJD7822HDL’s lamp output getting lost en-route through its optical path before it can emerge through the lens and onto your screen or wall. Hopefully the image will still look as bright as we’re hoping it will given its claimed 3200 Lumens of light output.

The light seepage pales into insignificance on the annoyance scale, though, when compared with the PJD7822HDL’s lack of a remote control IR receiver on its rear side. This means that if you’re sat behind the projector – as you very likely will be considering it’s got a short-throw lens – you won’t be able to control it with the remote control without standing up and walking around to its front. Madness.

The PJD7822HDL’s rear does at least carry a good selection of connections. Two HDMIs will be the main ports of call for most home entertainment users, and while these don’t include MHL support, the existence alongside them of a powered USB port means they are compatible with wireless HDMI video systems such as Google Chromecast. This is a very welcome feature on a projector, where attaching video sources often involves long and untidy cable runs.

There is also an RS-232 port for integration into wider control/AV systems, a D-Sub VGA input, a Monitor output, an S-Video input, a composite video input, and 3mm audio input and output jacks. 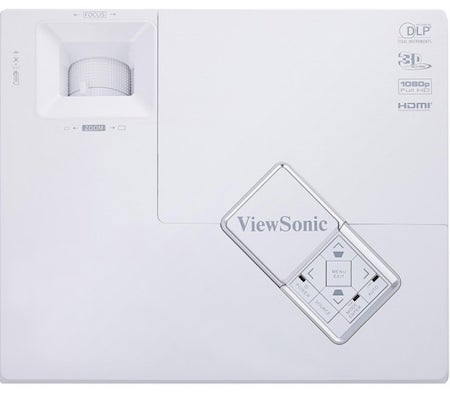 Joining the 3200 Lumens of claimed brightness on the PJD7822HDL’s specification sheet is a full HD resolution of 1920×1080 pixels, and a claimed contrast ratio of 15,000:1. This latter figure is a chunk higher than the 10,000:1 ratios of most sub-£1000 DLP projectors, and should hopefully stop the extreme brightness coming at the cost of a decent black level response.

As with any super-bright projector, the PJD7822HDL has the potential to deliver watchable pictures in the presence of more ambient light than most affordable projectors. Or, alternatively, its brightness could help it drive really large screens of 100 inches and more better than projectors with fewer lumens to play with. While this brightness makes the projector potentially well suited to a casual domestic living room set up or a presentation room at work, though, it doesn’t mean it will necessarily adapt well to dark room set ups for movie nights.

Some aspects of the PJD7822HDL’s specifications, from its connections through to some of its picture modes, show that ViewSonic is trying to have its cake and eat it with its new projector by trying to cater for both home and business audiences. This can be a dangerous game, as often such efforts end up falling between two stools, not delivering a performance that’s truly satisfying to either camp.

People looking for a home entertainment projector will be encouraged to hear that the projector defaults to a Movie preset when you first fire it up, and has colour management and multiple gamma preset calibration tools to play with.

One of the most interesting features of the PJD7822HDL is its ‘SuperColor’ technology. Exclusive to ViewSonic, this claims a wider colour range than conventional projectors thanks to a proprietary colour wheel design and dynamic lamp controls. SuperColor joins Texas Instruments’ Brilliant Colour system too, so it’s possible the PJD7822HDL’s colours really could be pretty explosive by budget projection standards.

If you’re a 3D fan you’ll be pleased to hear that despite being so cheap the PJD7822HDL supports 3D playback, using the DLP-Link system. The projector doesn’t ship with any free glasses, though.

The PJD7822HDL isn’t the most flexible projector we’ve tested in terms of physical setup options. A 1.3x optical zoom doesn’t go as far as some rivals, and there’s no optical image shifting to help you level out the image sides without calling on keystone correction – a system which distorts the image digitally, and so is not something we like using unless we really have to.

There are drop-down legs to front and rear to help you get the image into the right place, but using these will almost certainly require the use of keystone correction.

The PJD7822HDL is at least reasonably well equipped with picture calibration aids. Particularly useful are: a colour management system that lets you adjust the hue, saturation and gain elements of the red, green, blue, cyan, magenta and yellow tones; a wide series of gamma presets; and a (curiously named) series of colour temperature presets.

To get the best out of the PJD7822HDL we’d suggest turning off the projector’s noise reduction system when watching HD; switching between the Bright and Movie presets when watching in light room and dark room situations respectively; using the Economic Lamp output setting for dark room viewing; and if you’re feeling up to it, slightly taming the intensity of both the yellow and red colour elements via the colour management system to achieve a more balanced colour range.

The Brilliant Colour system is interesting here too, as it makes a dramatic difference not just to colour saturation but also overall brightness. We suspect many people will prefer the much punchier images you get with Brilliant Colour on, and we would definitely recommend its use in a bright room. For movie viewing in a dark room, though, you could try turning Brilliant Colour off, as doing so produces a more relaxed and subtle colour palette that feels slightly more natural – especially if a film you’re watching has lots of dark scenes.