So often these days super large LCDs grab all the headlines; 42 inches here and 46 inches there.


However, the small LCD monitor is an attractive proposition for many people. It can combine the functions of a desktop PC monitor and a TV, and is great for places where space is at a premium, such as the bedroom or the kitchen. In that regard, the Viewsonic n2060 has a lot to offer but it’s a shame that it doesn’t really deliver in regards to design or image quality. 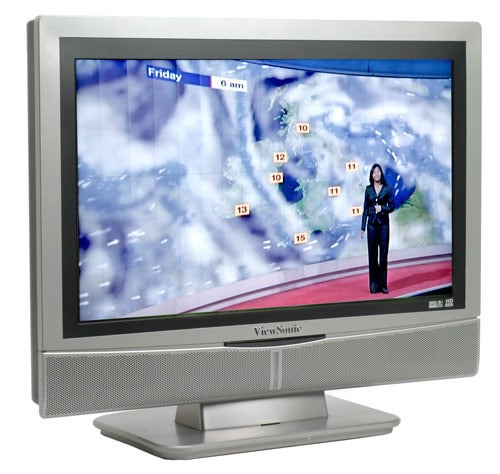 The styling hints at a display that will be placed in the kitchen or the bedroom rather than on the study table. It’s looks don’t really appeal to me. A walk round the recent Stuff show clearly demonstrated to me that when it comes to TV design, black is now the new black, making the silver finish of this TV seem rather dated. To be fair it is available in black and I think it looks better.


When switched on, a blue triangular stripe runs vertically through the centre of the speaker grille that sits underneath the bezel, and looks like a small glowing goatee. the Viewsonic logo is silver on silver and doesn’t stand out, while the black curved plastic underneath that presumably houses the receivers for the remote signals seems a bit squeezed in there. There’s also a lot of bezel around the screen, making the display look smaller that its 20 inches. Should you wish to, it’s wall mountable, following the VESA standard.


The specification list is impressive. Perhaps its greatest selling point is its HD Readiness as announced by the logo located at the bottom right hand corner of the bezel. The native resolution of 1,366 x 768 is enough for 720p HD material and it’s HDCP compliant via an HDMI port. There’s a VGA port too, along with Component input, composite, S-Video and SCART. There’s also a built in TV Tuner but it’s just an analogue one, not digital. There’s no DVI though, which indicates that it’s intended more as an AV device rather than a regular PC monitor though it can be used as one if you wish.

On top of the monitor there are controls for the menu and selecting the source. The central button looks like its a menu select button but actually it’s the on/off switch. Viewsonic has a rather odd method of selecting the Inputs. Rather than scrolling through them as with most TVs, you need to press the source button, select with the arrow keys and then press ok. It’s not intuitive.


The stand is a rather dull looking shape too and has absolutely no height adjustment whatsoever – neither up or down or even tilting forward or backwards. The display is rather thicker than your average monitor, to cater for all the connections. The power socket, VGA, HDMI, line-in and the aerial all plug-in upwards at the rear, while the rest of the connections are present on the left hand side. The connections are all labelled, so you don’t have to tilt it right over to see what your doing. On the far right, you’ll find a headphone socket, should you wish to view without disturbing others. 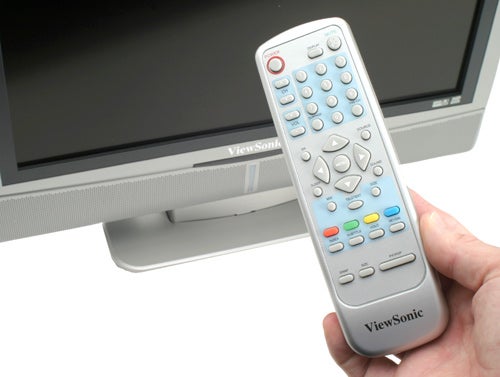 The built-in TV tuner is unfortunately only a standard analogue one, though you’d be hard pressed to find a TV at this price with one included. The automatic channel search took about 10 minutes and found each of the channels, though barely so, and picture quality could only be described as poor. However, this is as much down to the the analogue signal rather than any specific problem with the tuner.


The supplied remote looks and feels cheap. There is no design to speak of and the buttons are rubbery and unresponsive. That there’s no backlight is hardly a surprise. The central Menu button is sensibly located but for some reason the ‘OK’ button that you press to accept choices is a small thing to its top left.

There’s a Picture In Picture, which you can assign to each of the inputs and you can have the sound coming from the small picture or from the larger – so you could have the football in the background and have it with or without sound. There’s also a Picture and Picture function – each one side by side. A sleep timer is available and easy to set up via the remote.

After the poor performance of the in-built tuner I decided to feed it some better signals. I hooked it up to Blu-ray drive equipped Windows Media Center PC via HDMI. I soon discovered that the 1,366 x 768 resolution is a difficult one for a PC graphics card to deal with as no graphics driver will directly support it. The closest resolution you can get is 1,360 x 768, and in fact this is what is listed in the specs for the manual. The result is that when viewing on a PC the Windows desktop doesn’t extend all the way to the edges, so you get a box within a frame effect.


As well as the HDMI connection, I also hooked up via VGA and obtained a noticeably softer picture. However, that’s not to say that the Windows desktop over HDMI was great. Despite being hooked up via a digital connection, text was readable but letters seemed quite blurry, with some letter thicker than others and seeming to almost bleed into once another. This is not a display I could recommend for office work for any length of time.

There are four different image modes available when connected by HDMI. These are Standard, which is quite bright – backing up the 500 cd/m² claim, Mild, which dials things down a little, Vivid, that dials them right up again and a User Preset mode, which lets you try and optimise things for yourself, though I could only make things even worse. However long I played with the settings I couldn’t really obtain a picture I was happy with.


Our demanding DisplayMate test revealed the cause of the poor text – quite severe pixel tracking errors. Continuing with the DisplayMate tests, I found that there was also severe banding issues in the 256 Colour Ramp test, and the Colour Purity test displayed colours that were anything but – dark on the right hand side on lighter on the left. In the colour scaling test the blocks faded away so quickly the darker boxes could barely be seen. Viewsonic’s claim of a contrast ratio of 1000:1 seem to me to be grossly exaggerated.


I tried DivX HD, WMV HD and H.264 encoded HD Quicktime clips and nothing really shone. Colours never seemed quite right with skin tones having too much red.


On the upside, the viewing angle was actually quite respectable, thanks to the use of Super MVA technology in the panel. I had no reason to doubt the 8ms response time claims either with smooth lag free images. Another up side was the sound quality – being quite loud and with decent mid-range. Certainly good enough to fill a small room.


In the end the only images I was happy watching on the n2060w was standard def pictures piped via the Media Center’s digital TV Tuner and only because I have low expectations of Freeview quality.


The Viewsonic n2060w’s feature list is promising but ultimately it doesn’t meet the grade as an all round TV and PC monitor. The design is disappointing, particularly of the remote. Despite its HD resolution and wealth of connectivity, the n2060w doesn’t justify its £399 asking price.


Update: Following this review Viewsonic supplied a replacement monitor. The picture was slightly better with more vivid colours and slightly more detail in darker areas. The display is now available for £299.