The ViewSonic Elite XG270QC is a good-quality model with features that will sate high-end gamers. It's just a shame that contrast is a little low.

The ViewSonic Elite XG270QG isn’t a cheap monitor, with US and UK prices of £600 and $600, but it does promise a huge range of high-end gaming features including 165Hz Nvidia G-Sync, a 1ms response time and IPS technology, alongside the obligatory RGB LEDs.

Like the ViewSonic, there are plenty of other monitors that promise the earth – so let’s see if the Elite XG270QG actually delivers.

The 1440p resolution is high enough to make games look pin-sharp, especially when those pixels are crammed into a 27in diagonal. The screen here is certainly far crisper than a 1080p panel.

And the resolution contributes to making top-tier games look great. The fact that it’s a step below 4K means that a wider range of more affordable graphics cards will be able to run games smoothly on this screen. 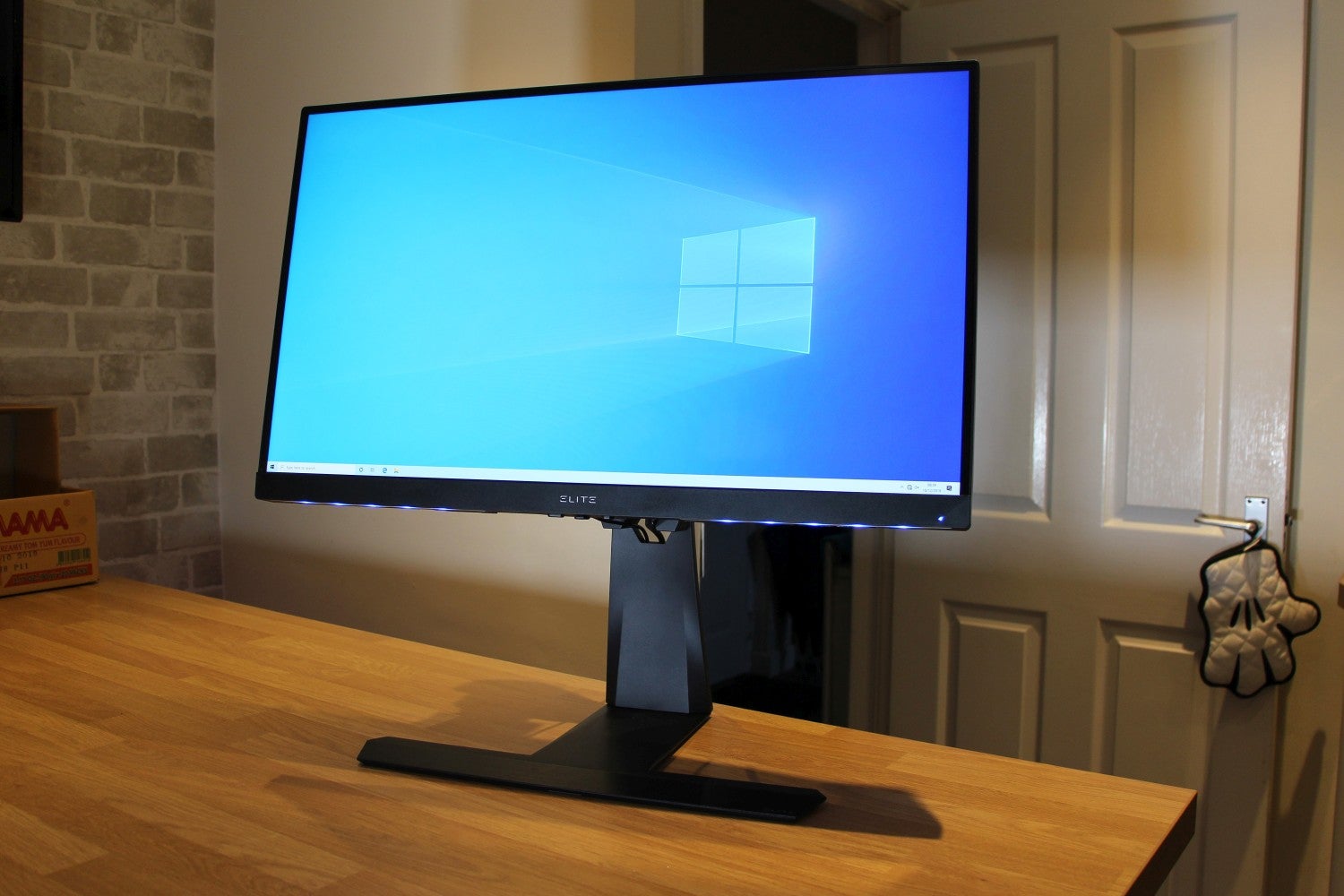 Put simply, having a 1440p resolution on a 27-inch diagonal looks excellent, and it removes some of the barriers to entry associated with 4K gaming and 4K panels.

The inclusion of Nvidia G-Sync will result in smooth gaming on this panel; with no signs of tearing and ghosting. Nvidia’s technology still only works with Nvidia graphics cards, however, which does prove somewhat restrictive next to FreeSync, which works on both Nvidia and AMD GPUs.

The ViewSonic peaks with a refresh rate of 165Hz, which is higher than many 144Hz panels and the equal of several others. It isn’t the best refresh rate we’ve seen, though; there are several screens that run at 240Hz. However, only the fiercest eSports players will benefit from such a refresh rate, and 165Hz is still more than sufficient for single-player titles and the vast majority of eSports players. It’s also more achievable for a greater number of graphics cards when compared to 240Hz screens. 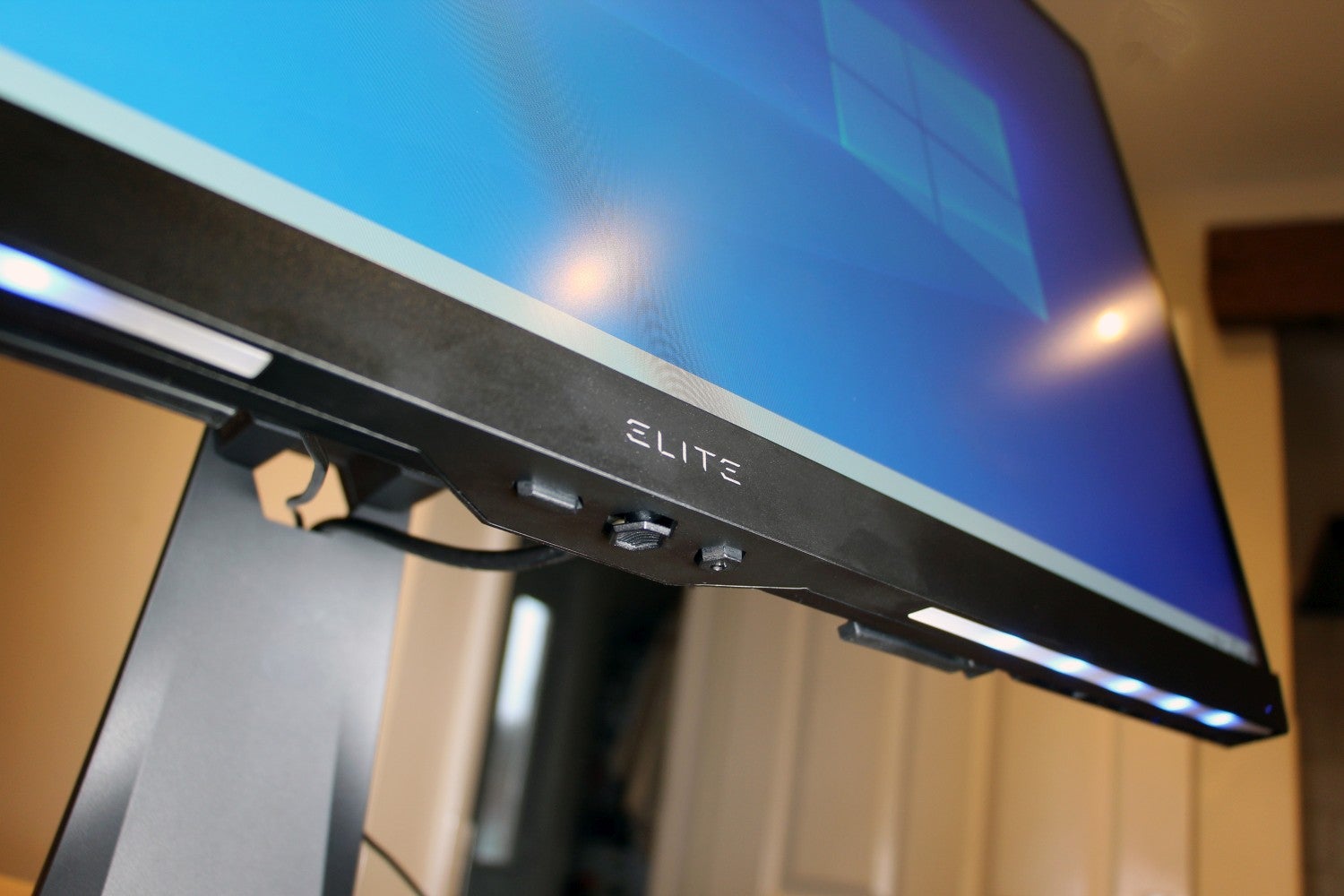 The ViewSonic pairs its fast refresh rate with a 1ms response time, which is stellar – about as good as it gets on gaming screens right now, and easily low enough for top-tier eSports titles.

Beneath all of this is an IPS panel, which means colours should be super-accurate. This area of the market is split between IPS and TN screens, with the former delivering better colours and the latter serving up marginally better response times. 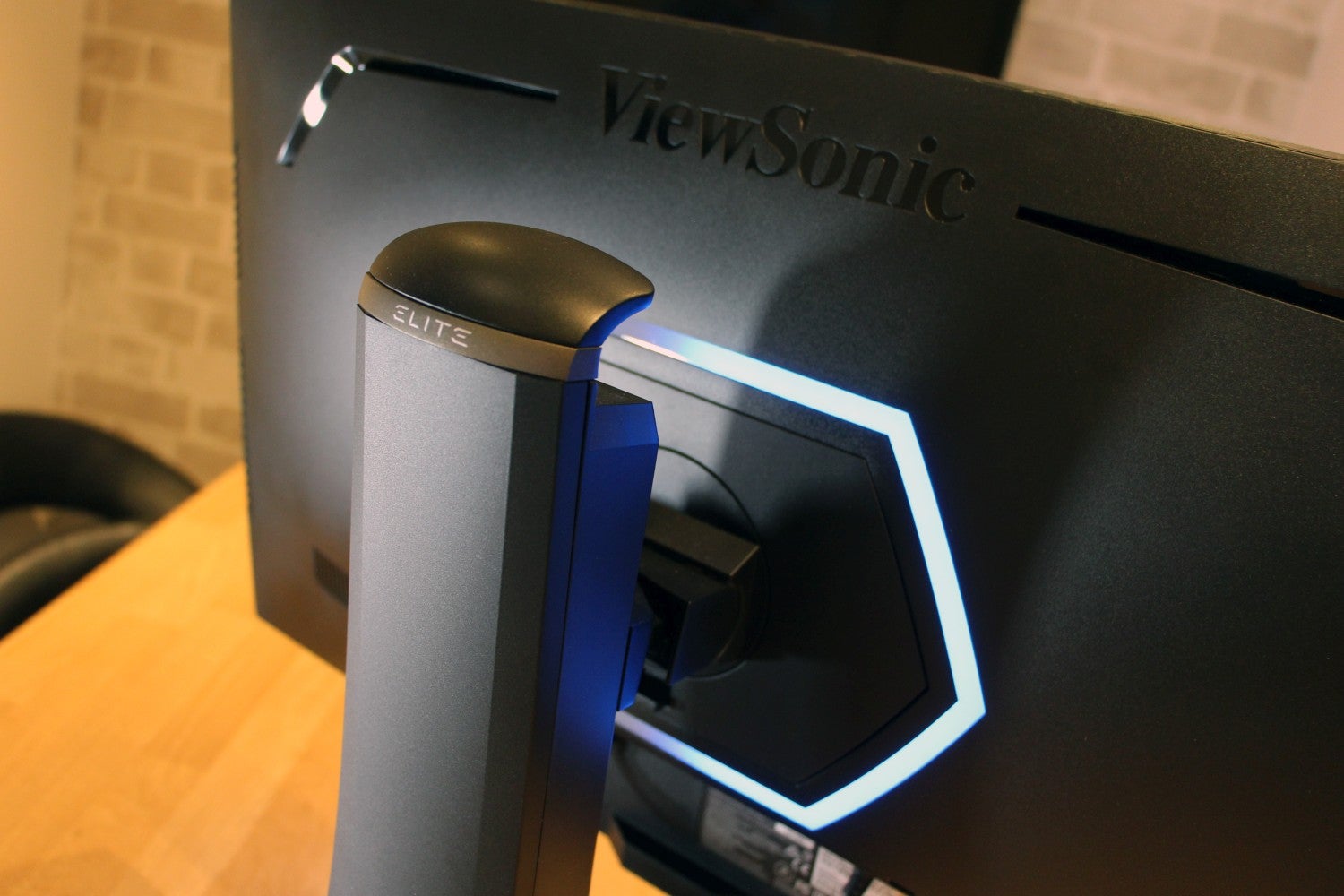 In addition, while the ViewSonic does claim support for 10-bit colour, this is actually an 8-bit panel boosted with FRC. That’s fine for gaming – the difference between this modified 8-bit panel and a true 10-bit screen won’t be noticeable. Also bear in mind that G-Sync on this screen only works with 8-bit colour.

The ViewSonic’s specification is impressive. There are a lot of screens around right now offering a 1440p resolution and G-Sync with a 165Hz refresh rate, but the only other panels with a 1ms response time use TN technology – which tends to deliver poorer colour accuracy and viewing angles.

Right now, the ViewSonic Elite XG270QG is alone in serving up a combination of 165Hz G-Sync, a 1440p resolution and a 1ms response time in an IPS panel. That makes this screen unique – and, on paper at least, a cut above TN-based rivals.

Pleasingly, the XG270QG is a smart-looking monitor, with black plastic throughout, slim bezels and a stand that mixes sand-blasted and brushed metal.

The brooding design is backed up with solid build quality. The monitor weighs in at 7.7kg, which is reasonable, and it’s only 265mm deep so doesn’t take up a huge amount of room.

It offers a decent 120mm of height adjustment, which is entirely normal for this class of screen. It has left and right pivot of 90 degrees in both directions, and 25 degrees of forward and backwards tilt. This display swivels into portrait mode and also supports 100mm VESA mounts. 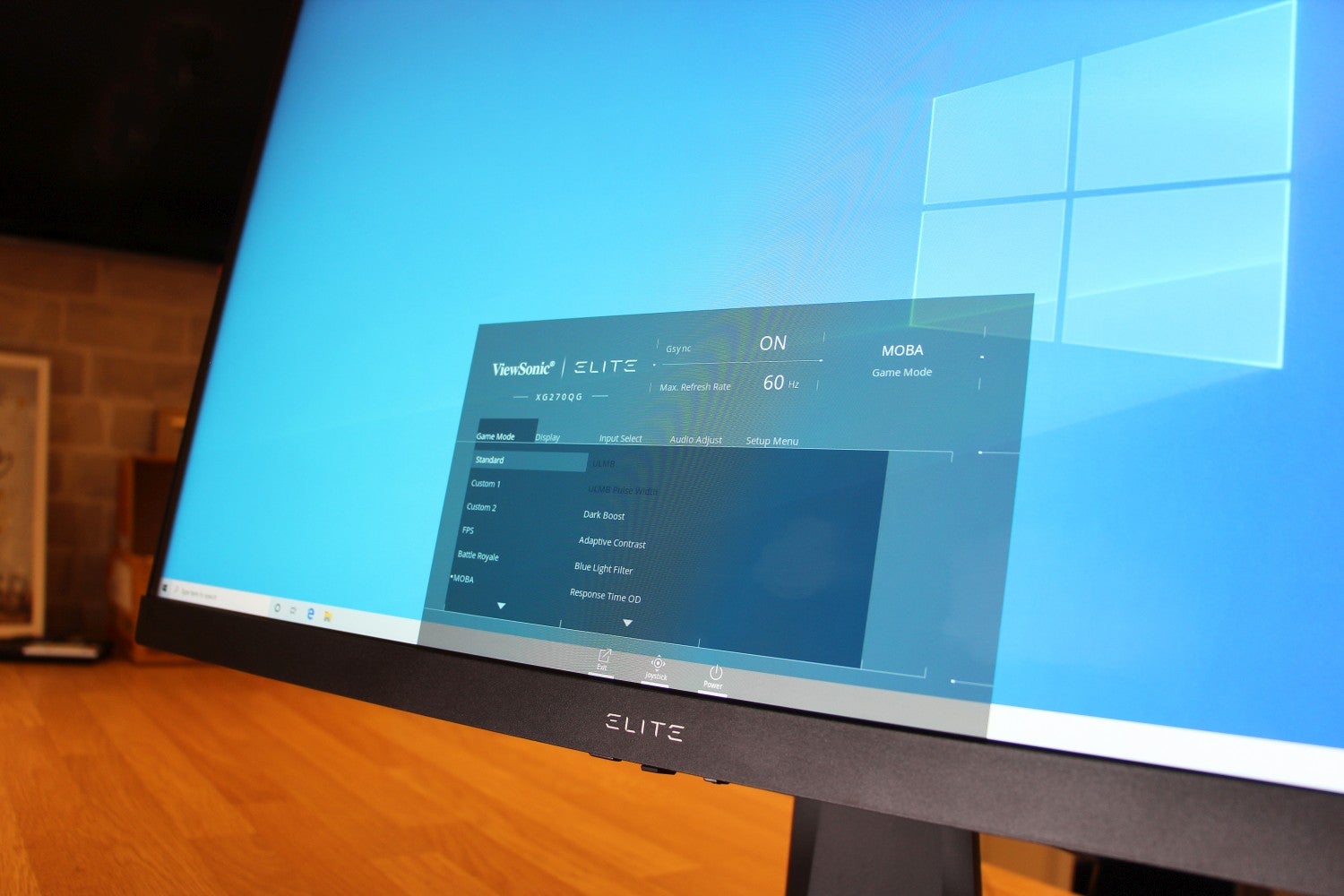 This screen also offers several game-friendly features that aren’t found on some rivals. It has a headphone hook, and the stand has a cable-routing hole. The bottom of the panel has a couple of extendable hooks for holding mouse and keyboard cables in place – handy for keeping your desktop tidy.

Shields are also included; they can attach to the side of the screen and provide privacy in key gaming situations. There are RGB LEDs, too, with a row of lighting on the bottom of the panel and a ring of lights around the stand at the rear.

Connectivity is mixed. Display connections are handled by DisplayPort and HDMI, but the latter uses HDMI 1.4 – so it only works at a peak refresh rate of 60Hz. You’ll have to use DisplayPort to get the most out of this screen. 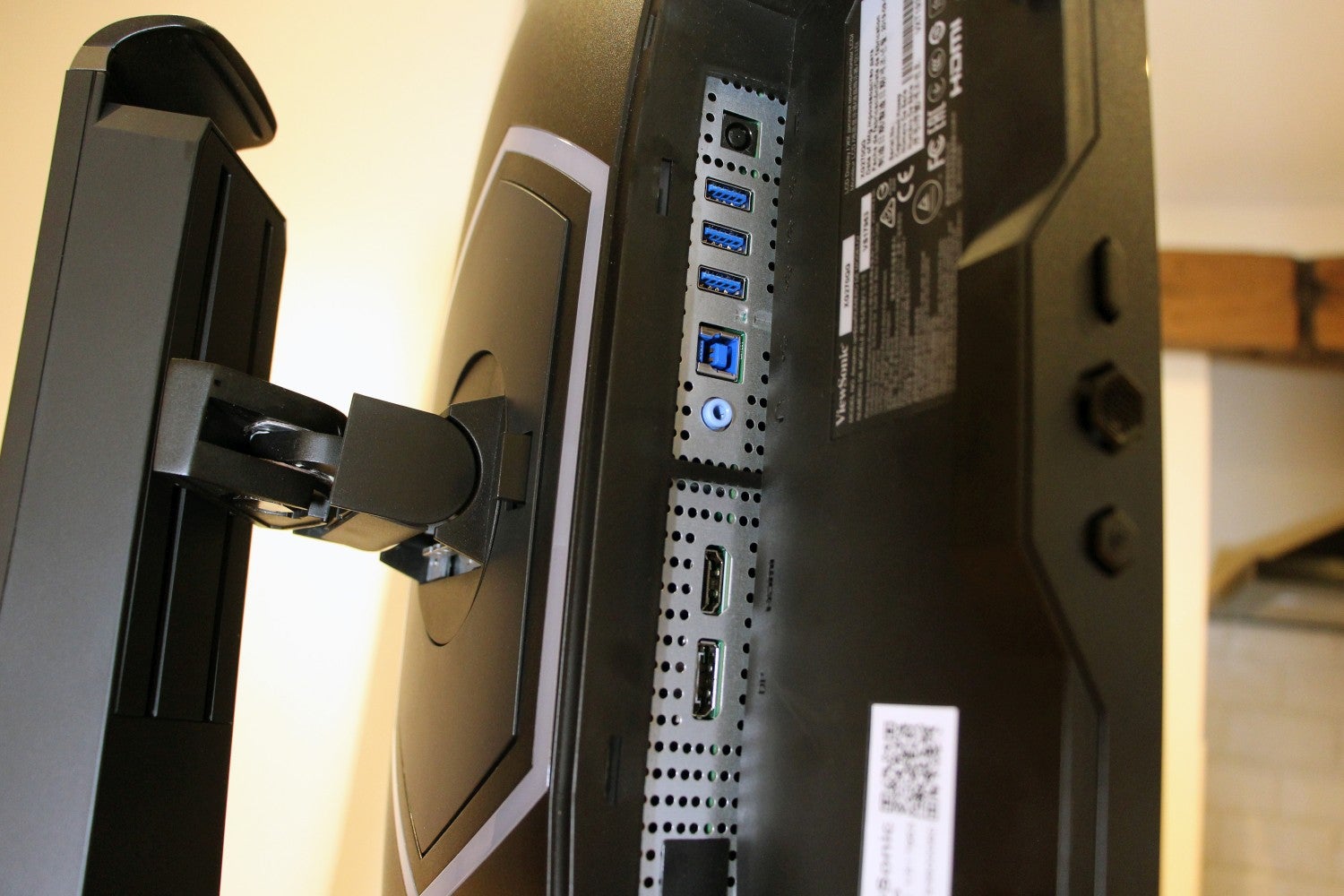 There are three USB 3.1 ports at the rear of the panel, but the ports would be more useful on the side of the machine. There’s no USB-C, either.

The ViewSonic’s pair of 2W speakers aren’t particularly good. They produce a tinny sound, without much bass. They’re okay if you’re desperate, but that’s it.

Nor is the on-screen display extravagant. It’s fast and well organised, but it looks plain and doesn’t include options for moving it around the display or for changing its size.

The Elite XG270QG serves up image quality that’s bright and punchy – but it’s lacking when it comes to depth.

At factory settings the ViewSonic delivered a decent brightness level of 403cd/m2, but its black level of 0.5cd/m2 is too high – so darker areas don’t deliver a huge amount of depth.

Those figures create a contrast ratio of 806:1. While this isn’t a disastrous figure, and the brightness level means that this screen is still vibrant, that mediocre contrast ratio means this screen doesn’t offer up the subtlety and depth of colour that can be found elsewhere.

Colour figures are better. The average Delta E of 2.29 is great, and at a point where the vast majority won’t be able to notice any deviations. The colour temperature of 6004K is a little warm, and so some white tones look a little oversaturated – but that result is still close enough to the 6500K ideal to deliver good levels of accuracy. 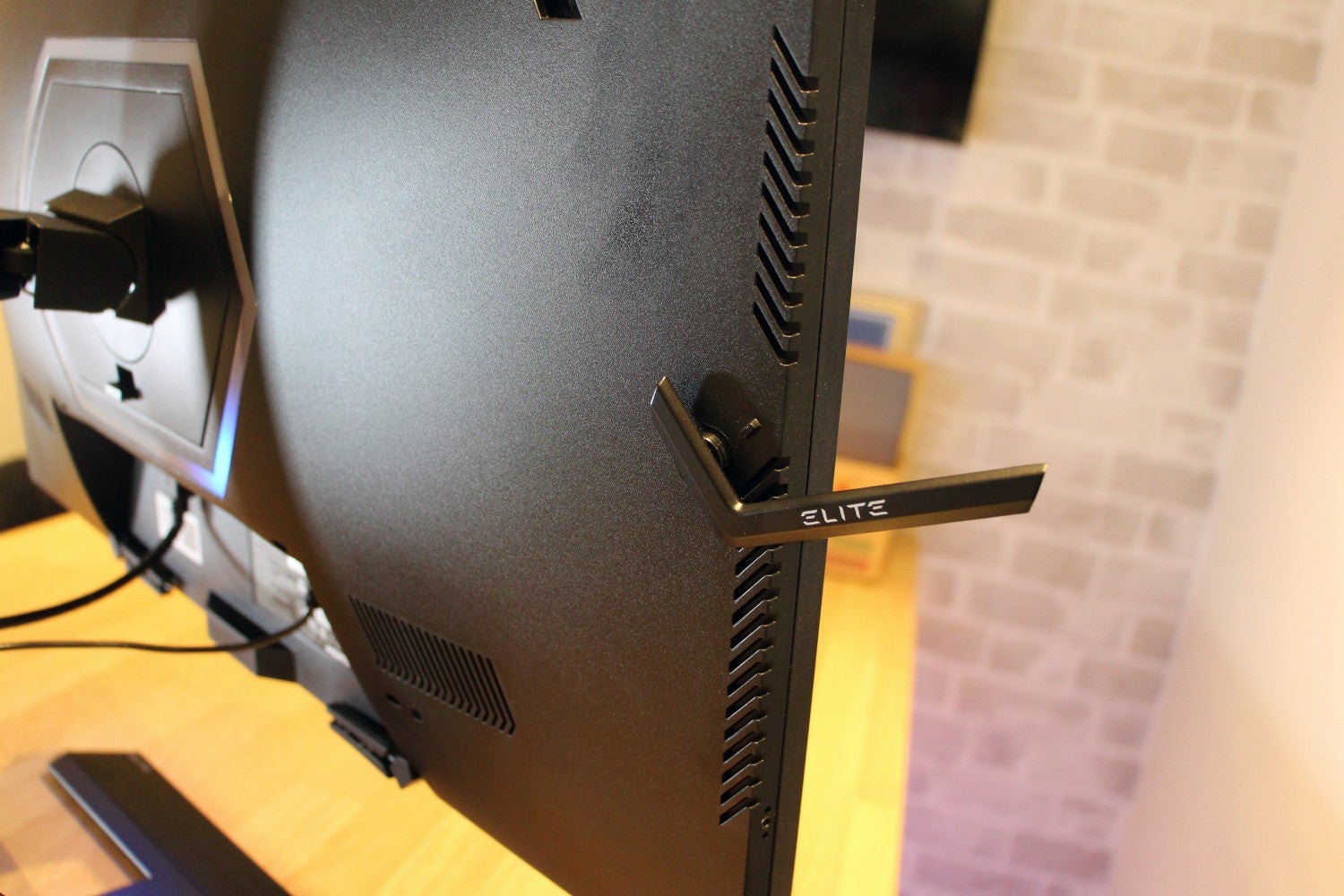 This monitor’s colour space abilities are great, too: it rendered 99.8% of the sRGB colour space and 96.3% of the DCI-P3 space. The former is perfect for gaming, while the latter is ideal for movies and other types of digital content. No matter what you’re playing or watching, the ViewSonic will handle all of the shades required.

That contrast level is the biggest issue here, and it means that the ViewSonic doesn’t have quite as much depth as many other screens – this panel is bright, breezy and punchy, but not particularly deep.

However, there remains enough contrast here for gaming, and this panel’s bright output lends itself to many types of game – especially those with brighter, louder colour palettes, such as eSports titles and many console and action games. 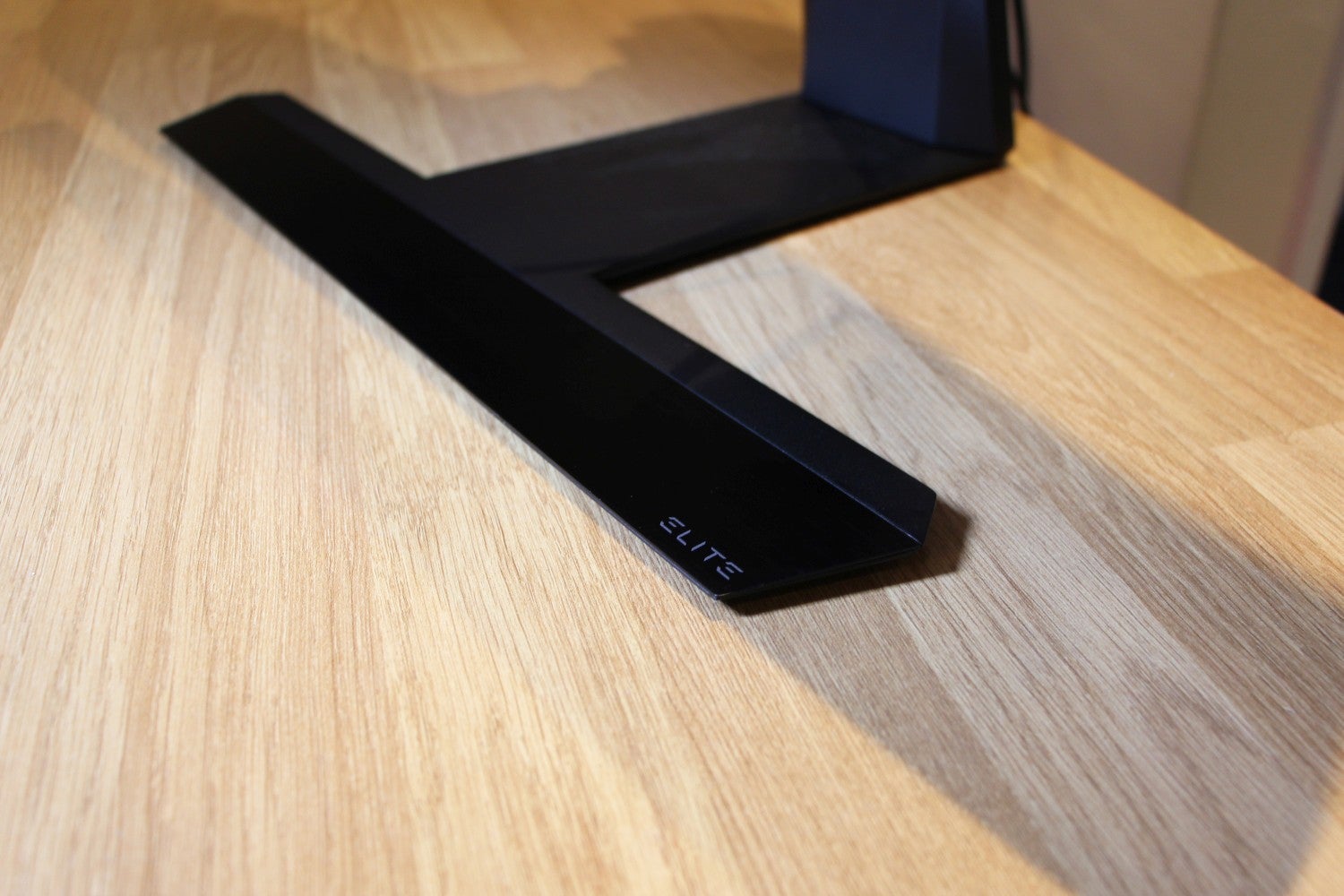 It helps, too, that the ViewSonic has a response time of 1ms and an input lag average of 5.32ms. They’re both fantastic figures and mean that this screen is easily capable of handling fast-paced, competitive games.

As usual, the ViewSonic screen has several gaming modes. However, the options here don’t improve the panel, making minimal difference on image output.

The Battle Royale and FPS options, for instance, make contrast slightly worse. The MOBA and Battle Royale modes do this, too, but also reduce colour accuracy. The Console option further reduces colour quality.

Uniformity is only mediocre. The ViewSonic screen lost 19% of its brightness on the left-hand edge and 18% in the bottom-right corner. They’re middling results, but colour and contrast variations just won’t be noticeable during gaming – so it isn’t a big concern.

Should you buy the ViewSonic Elite XG270QG?

However, this model does deliver plenty of bang for your buck. The inclusion of Nvidia G-Sync at 165Hz on a 1440p resolution delivers crisp, smooth gaming, and no other screen combines an IPS panel’s improved colour accuracy with a 1ms response time. Its sRGB and DCI-P3 gamut coverage levels are impressive, too, and mean this screen can handle gaming and media with ease.

The Elite XG270QG isn’t perfect, though. While the low contrast figure won’t hamper gaming too much, many other screens are better in this regard, with a higher result delivering increased depth. The port placement and selection could have been better, too, and the keenest eSports players will still want to seek out a 240Hz panel.

Despite those issues, the ViewSonic does a decent job of living up to its name. This panel will handle high-end, high-speed gaming for years to come thanks to its resolution and G-Sync pace, the response time makes it good for most competitive scenarios, and the IPS panel delivers decent colours. It’s one of the best gaming monitors around right now.